Nottingham Forest and Tottenham Hotspur have announced the new link between the two clubs. Despite Lampard being offered a link with his ex club Chelsea he chose Spurs. Frank had this to say about the link "I believe the link between Forest and Spurs will be a unique one. I had the chance to link up with Chelsea, Liverpool and Arsenal, but I feel that Tottenham had more to offer us. Their youth system and facilities are amazing and I hope to bring the same to Forest one day. To top it off I get to work with Andre Villa-Boas who are never gave the backing I should of when him and myself were at Stamford Bridge. I look to change this now."

Nottingham will play a friendly against Tottenham each year and will also receive a nice sum of 134K each season from the North London club. It is apparent that Lampard is currently in contact with Daniel Levy and AVB on the subject of Danny Rose's availability. Hoping to secure a loan for the young English full back in the coming weeks.
Login to Quote

Lampard has announced the arrival of two loanee's into Nottingham Forest. British goalkeeper Ben Amos has joined the club for the season to take the starting XI spot at the Reds. After having a successful run at Hull City last year prior to their promotion Lampard clocked in on the young goalkeeper and took many by surprise by snatching him up on a loan. The other player in for Forest is Marc Albrighton a young winger from Aston Villa. His work rate makes him a truly strong player to be up against in matches. Many Villa fans are surprised Lambert has let him leave out on loan, as they thought he had something to offer the club this season. 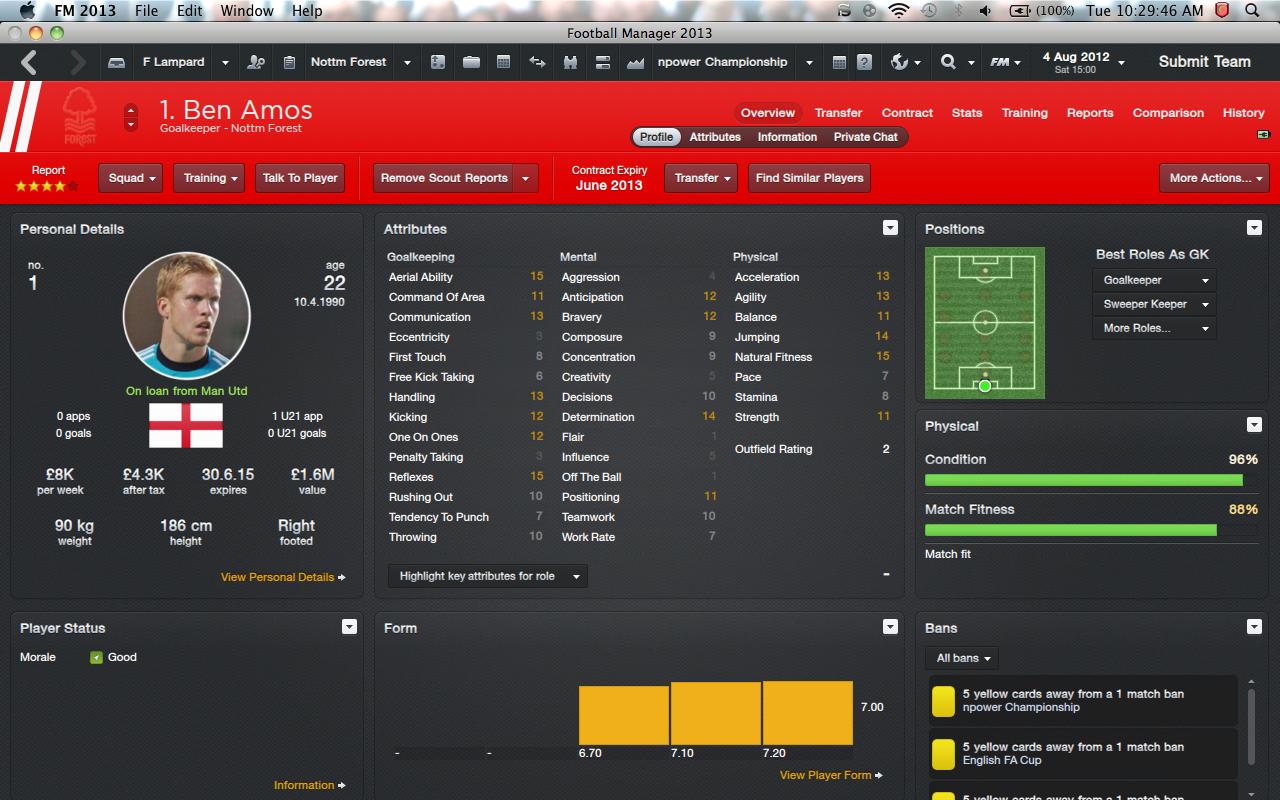 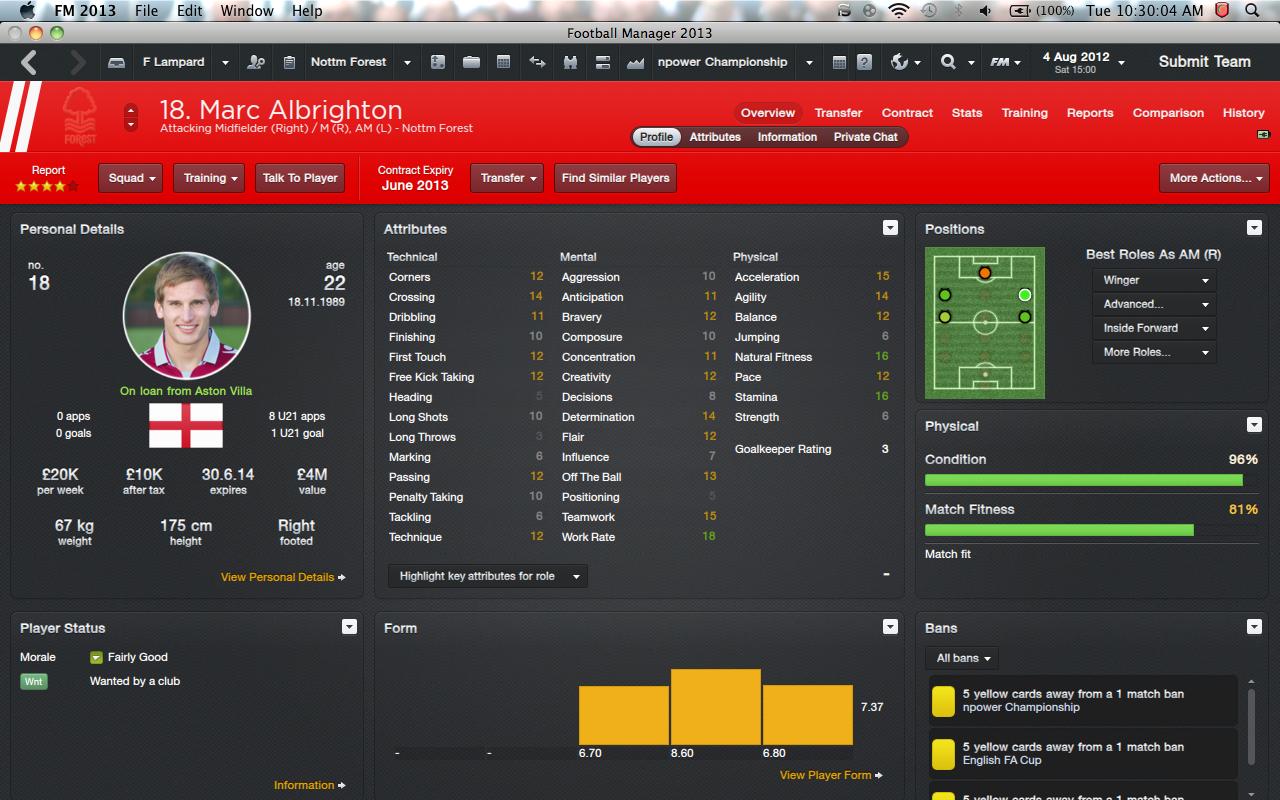 Prior to Nottingham Forest's opening game of the season and Frank Lampard's first game as a manager, Lampard sat down with 'BBCsport' to talk about the season ahead and plans he has for the club. Lampard summarized his thoughts on the club in this:


"Personally I know this club has a lot of history in the 1978, Nottingham won the Premier League. This is a great piece of history to take in. It shows that the club and fans have the history and passion to go to new heights. So obviously my first goal is to gain promotion to the Premier League whether it takes me a single year or a few, I will work my hardest at making this happen. I do believe though that the club have given me the right backing to move the team in a promotion challenging spot for the season coming. With a few more signings I believe we will be contending right up there but, I won't be disappointed if we don't make it this year. Making a club Premier League quality is a huge task and take years to muster a place for it. I believe we can do it though, with no doubt in my mind what so ever!"
Login to Quote 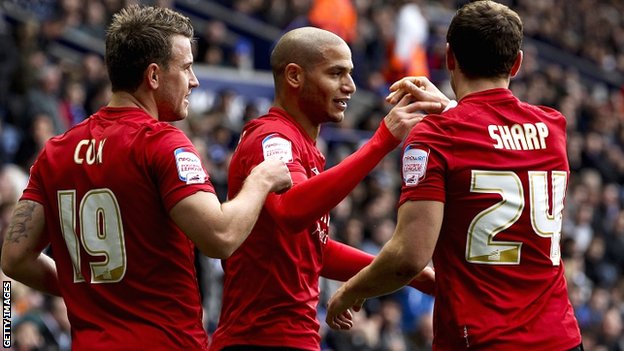 Lampard took his new team into battle for the pre-season against Wolverhampton to open up the season. Fans must have thought that last seasons fixture would have been the last time they saw their team in action against the Northern club. Yet, a tie has been arranged between the two. Many fans will get to also see the new signings in action to better interpret the players influence on the clubs title chances even though the media have awarded Forest with a subtle prediction of tenth place for the Reds.


So I forgot to do one of these in my first posts as Nottingham manager so I will do it now as we aren't too far into the game. 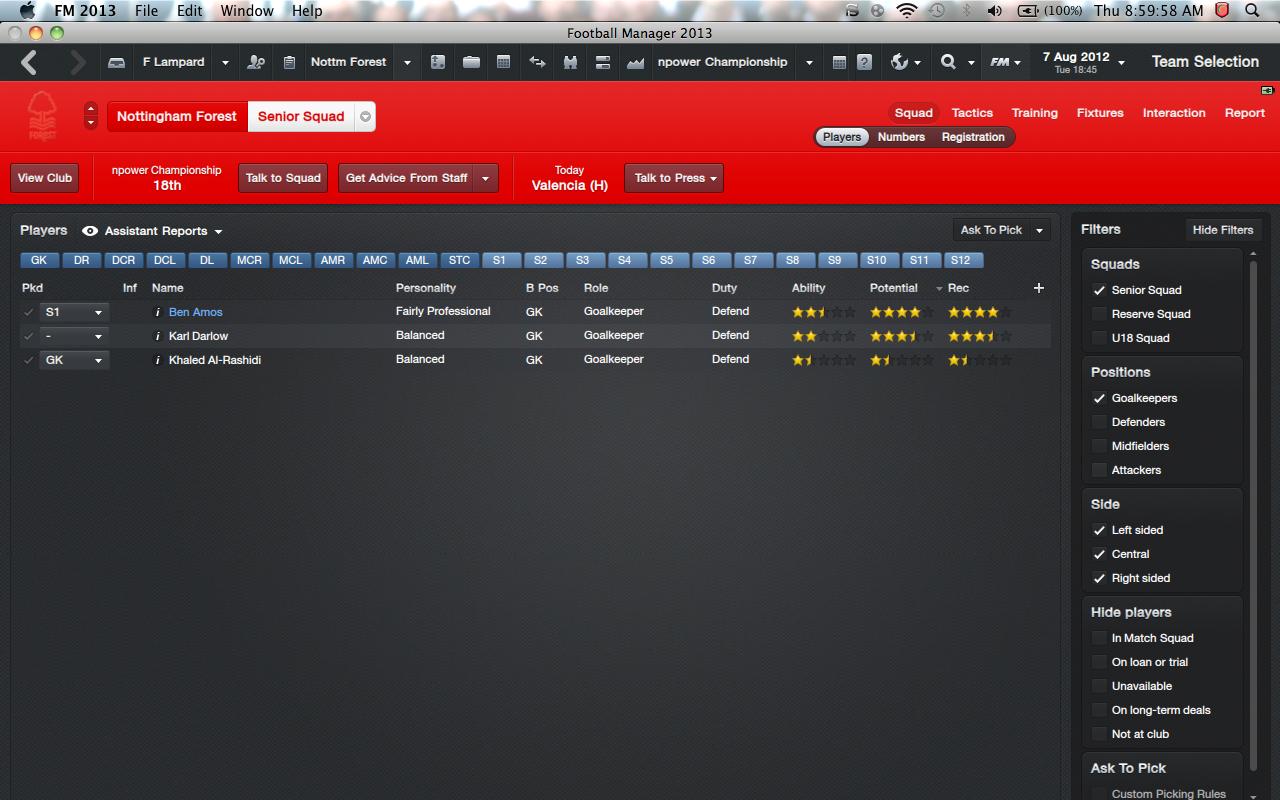 With that addition of Ben Amos this position is well kept 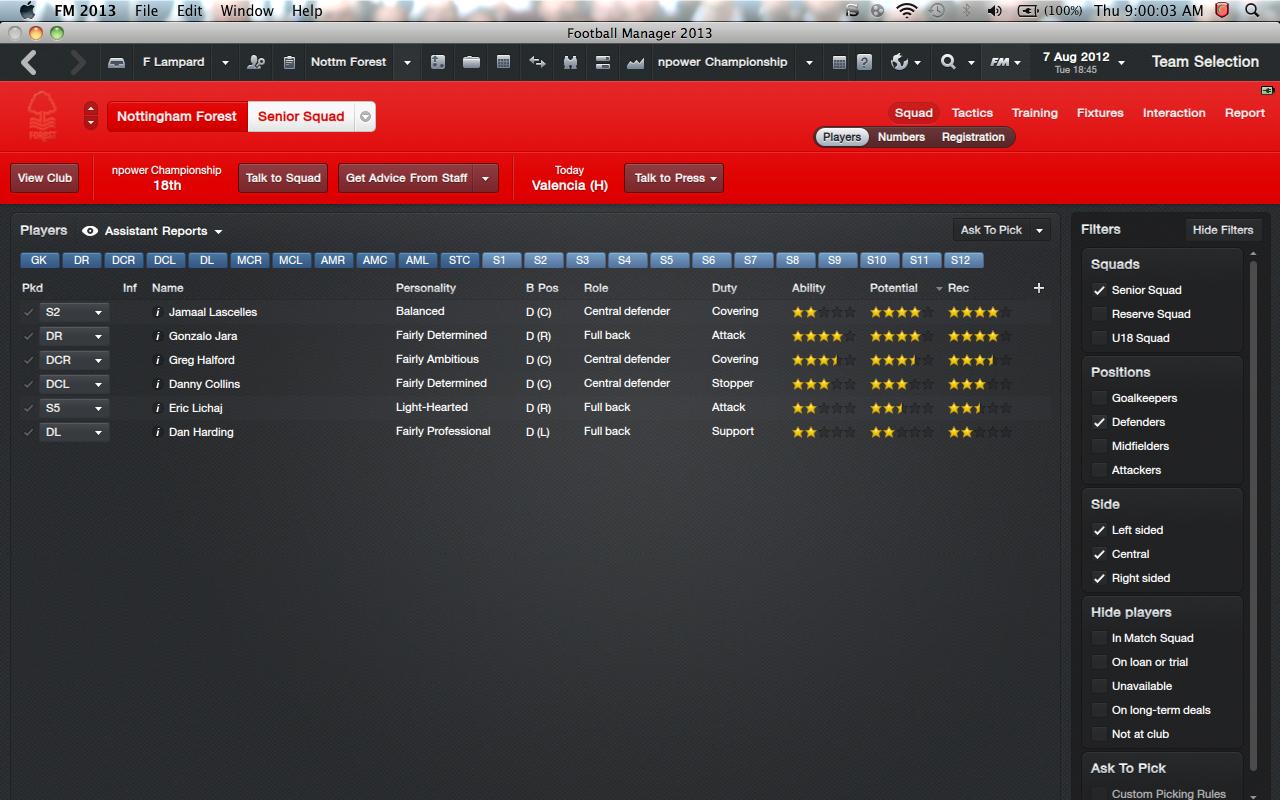 Needs more depth and better players. We definitely need a new left back to start the season. 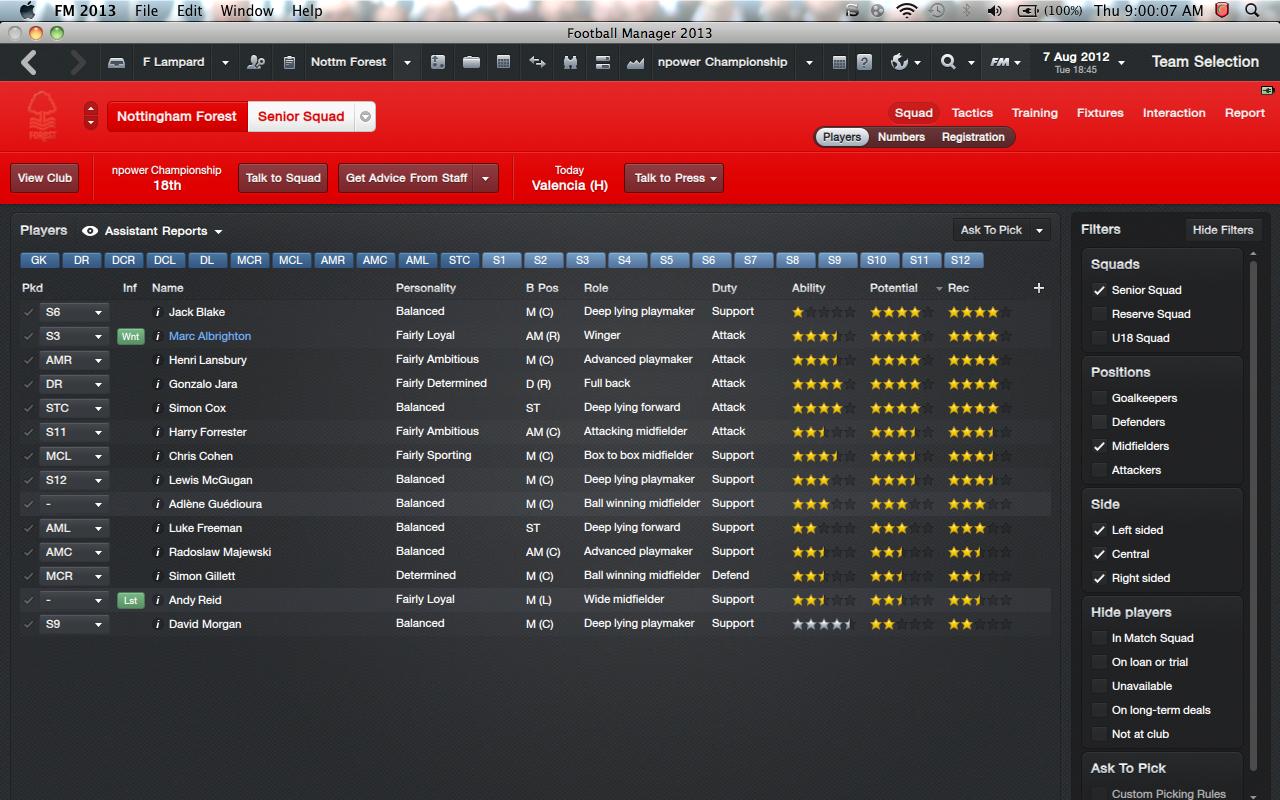 Our most in depth position without a doubt. There are lots of strong players in the midfield and I look forward to using it. 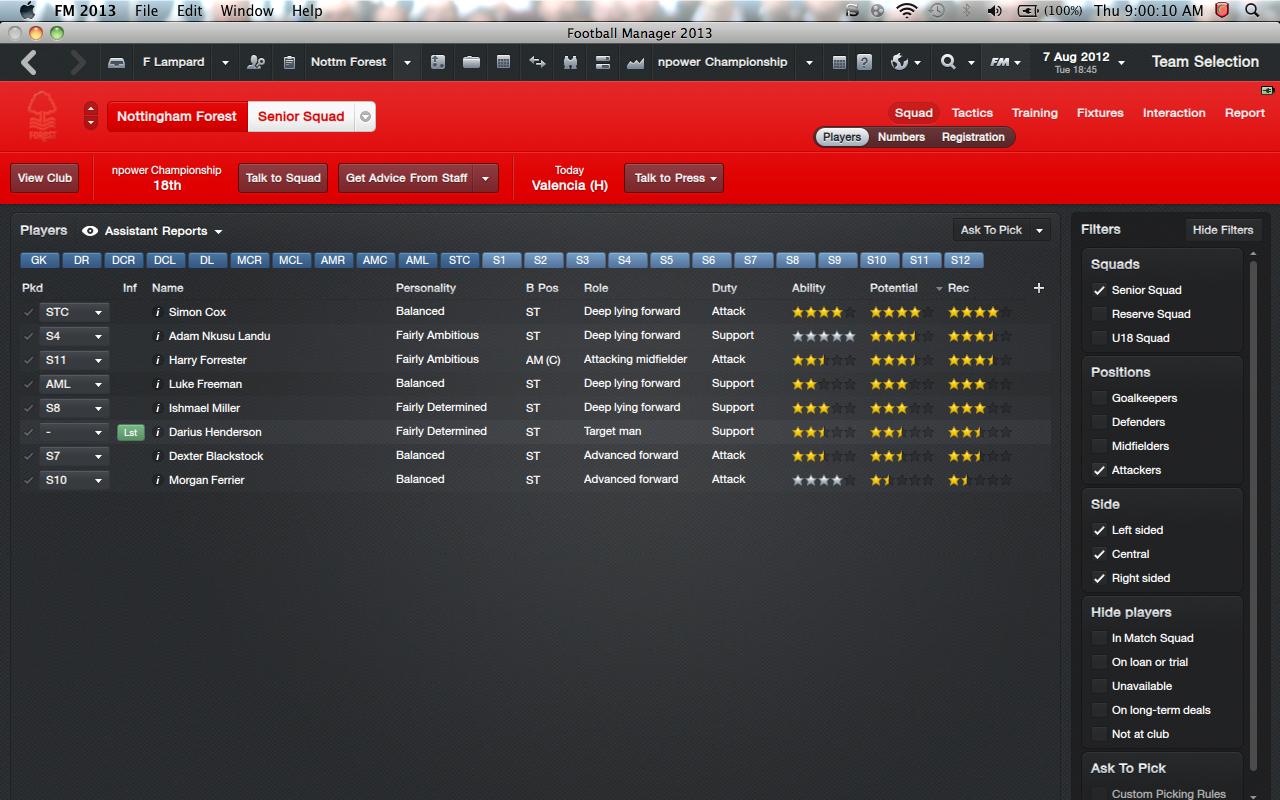 I believe this is one of the strongest parts of the squad along with the midfield and nothing much has to be done to this in order of improvement.
Login to Quote

k1rups
9 years
A great start mate enjoying it so far! Good luck with it
1
Login to Quote

Jozef
9 years
How have I not commented on this story yet? Nice squad and good luck with the competitive season mate.
1
Login to Quote

Verdinho
9 years
Sweet update pal. Lascelles, Blackstock and McGugan were personal fave's of mine when I was Forest
1
Login to Quote

Nottingham's pre-season continues with their next fixture against Haverfordwest. Fans anticipate an easy victory but, upsets are inevitable. The Bluebirds fans will undeniably be looking to prove this as they welcome the Reds to Bridge Meadow Stadium in Wales.

On transfer news apparently the deal between Tottenham and Nottingham involving Danny Rose has broken down. Nottingham were interested in a loan but, Spurs had other ideas as they include him in the first team. Lampard opened up about his intentions to sign Rose in a pre-match press conference last night. He stated "we were and are interested in Danny Rose but, Tottenham had no intention to loan him out. They told me the only way he would leave the club is on a permanent deal. So we did enquire but the deal they wanted was well over our means."

Verdinho
9 years
Guy Moussi and Chris Cohen are beasts. Be sure to use them
Login to Quote

After Nottingham's three pre-season friendlies Forest midfielder, Chris Cohen sat down with BBC-Sports to talk about his time with the squad and new manager this season.

(I) - So with the recent departure of Billy Davies (Ex-Forest manager) and the recent appointment of Chelsea legend Frank Lampard. What was your take on the changing of staff?

(CC) - It is truly an honour to work under Lampard. His cousin and him have definitely created a warming feel at the club their good humour, motivation and discipline are going to drive this club forward.

(I) - And what is your take on the new signings of Freeman and Forrester?

(CC) - Both players look to be promising for the club and Freeman made that clear with his excellent display against Haverfordwest last week where he scored twice and picked up MOTM.

(I) - Is there a difference in Davies managing style and Lampard's?

(CC) - Definitely, Lampard has worked under great managers like Mourinho, Hiddink and Ancelotti. All these managers have influenced him and you can see the quality in training being up'd. I feel like I am at a Premier League club.

(I) - Lastly, to round off this interview, what affect do you think the appointment of Lampard have on Forest?

(CC) - A great one. His determination and modest personality make an extremely strong leader. He has made it all clear to us where he wants to take the club and we all believe we can do it. Not to mention his already famous name which has brought more fans to the club equalling revenue through sales and sponsors. I salute the chairmen for their quick move for him, as he will bring wealth to the club just because of his name.
Login to Quote