Justice
8 years
Great to see you get a new stadium, will certainly help you out in the future in terms of finances

wellsy1498
8 years
Nice to see you got a new ground. More success is on its way

Chris
8 years
Nice stadium, just player as Chelsea against them in the champions league at their first game at the stadium! Keep up the story
1
Login to Quote 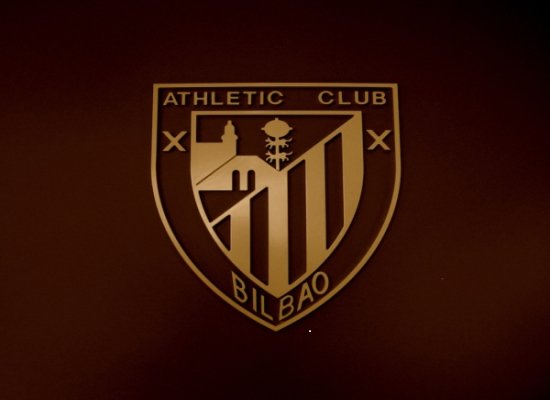 Athletic Bilbao has completed the signings of Spanish hotshots Ignacio Cidoncha, David Villaran and Jose Ramon for a combined fee of approximately £2 million 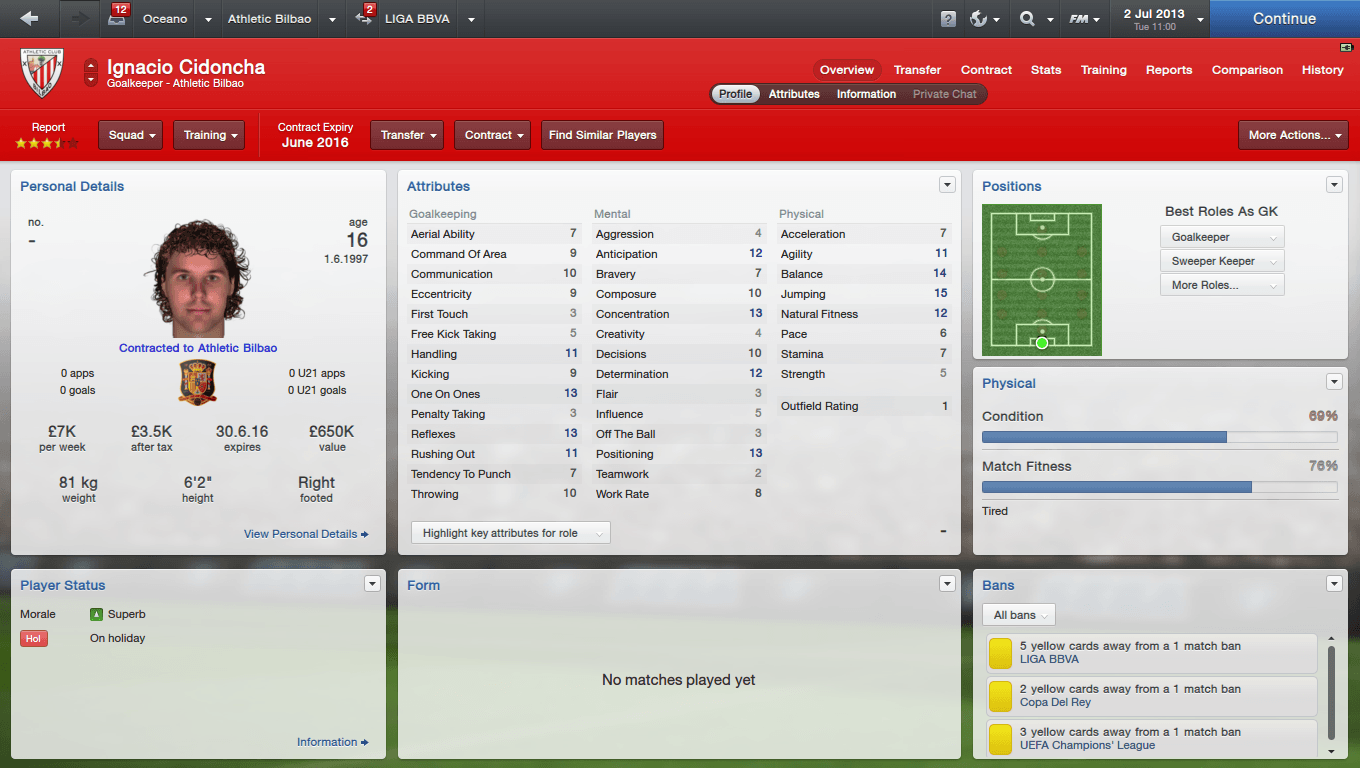 The 16 year old had just signed a professional contract with ‘Los Merengues’ but later agreed a three year contract on £7,000 a week.

One player who was yet to sign a professional contract was David Villaran who joins Bilbao from Liga Adelante club Las Palmas. 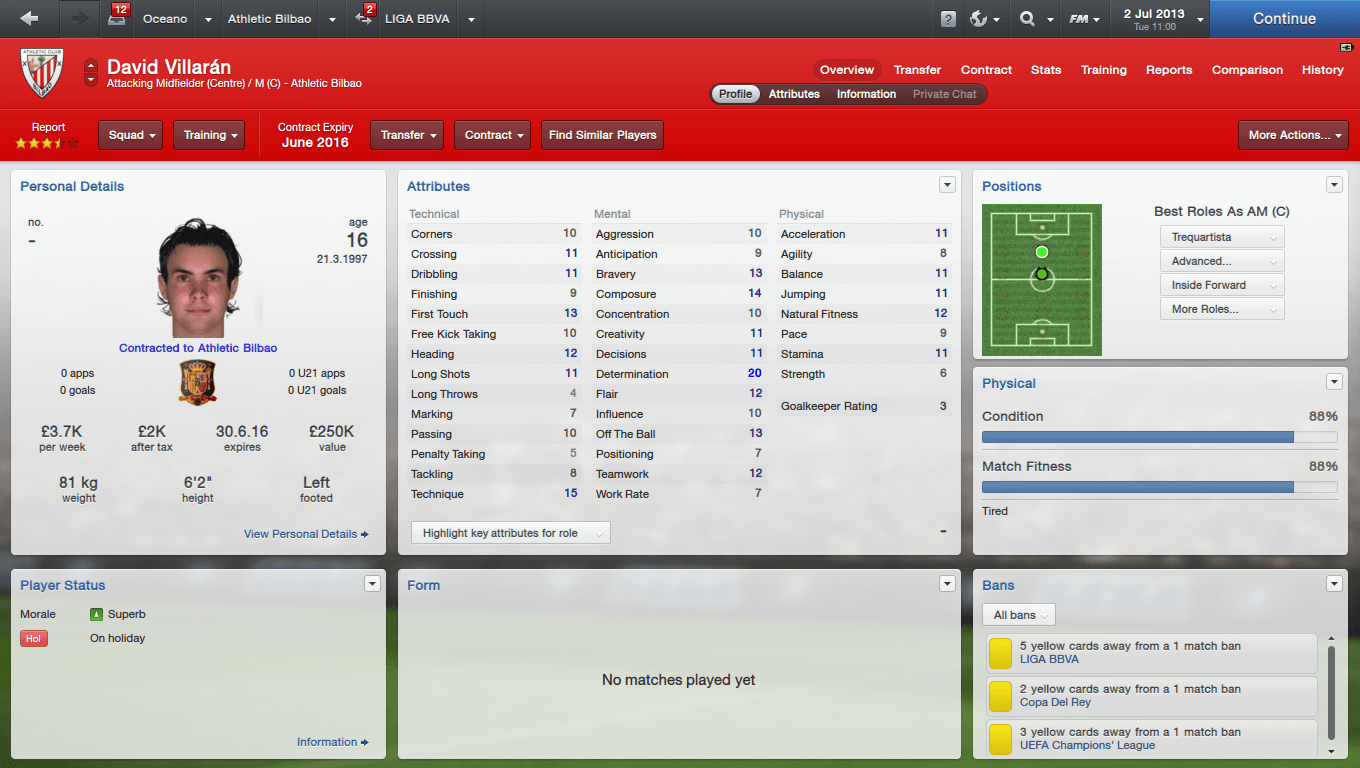 The central midfielder who just turned 16 years old moves to Bilbao on a 3 year contract for free in which the Basque club will be forced to pay £400,000 compensation to Las Palmas due to Villaran’s age. 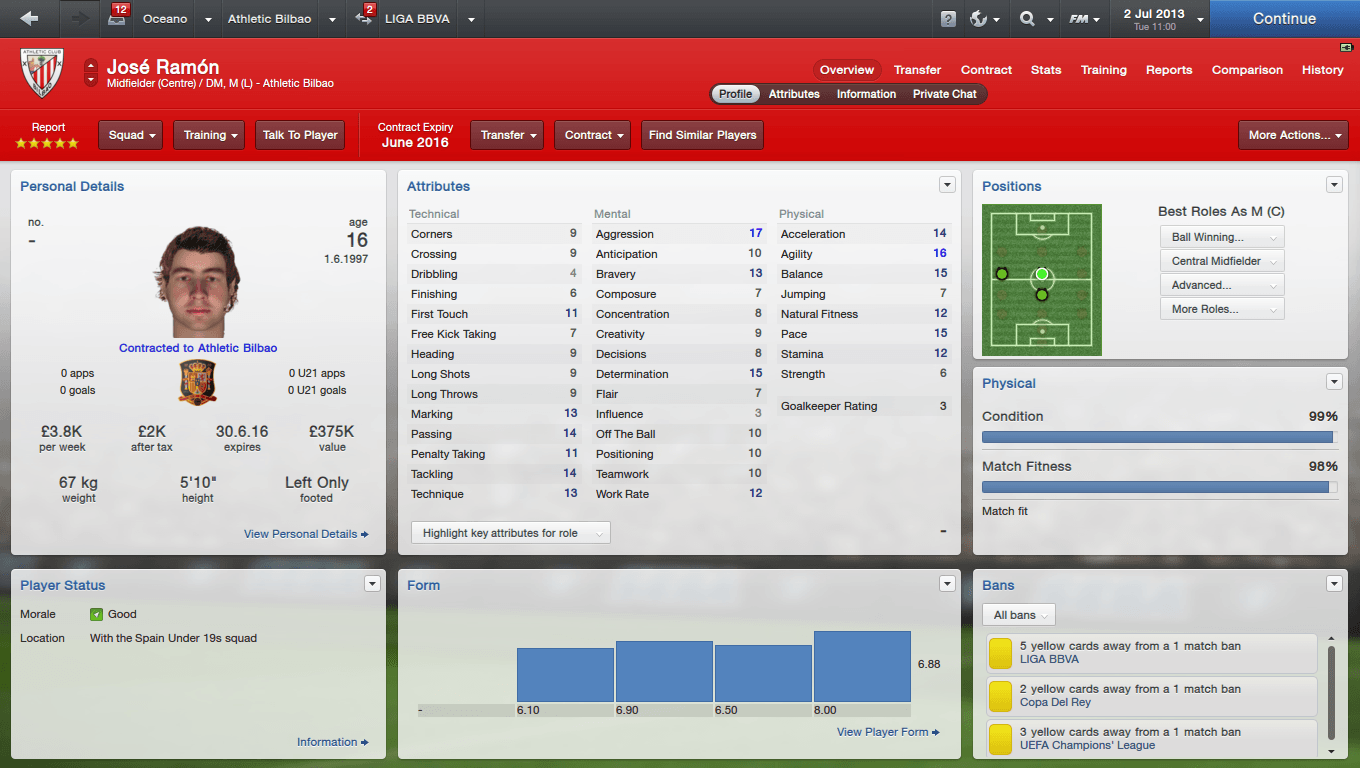 Similar to Villaran’s transfer is Jose Ramon who also joins Bilbao at a zero cost in which ‘Los Leones’ coughed up £475,000 in compensation to Tenerife.

Ramon is known as one of the Spain’s most exciting prospects with teams such as Real Madrid and Villarreal after his services before Bilbao snapped up the 16 year old ball winning midfielder.

All signings are likely to represent Athletic Bilbao’s Under 19’s squad this season although the sizeable fee paid for some suggests they may make a jump to the first team sometime in the near future.
Login to Quote

LOS LEONES COUGH UP FOR RUFFIER 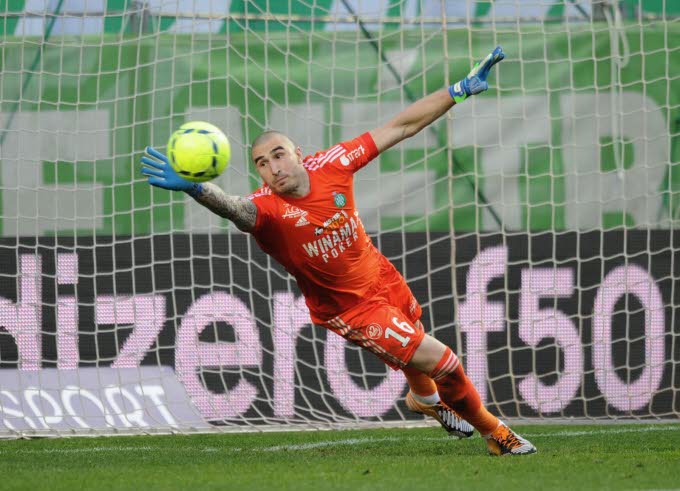 After months of pursuing, Athletic Bilbao has finally announced the signing of Stephane Ruffier for a fee of £21 million.

Ruffier joins Bilbao on a five year contract and is expected to be their new number one as fans anticipate the departure of Gorka Iraizoz or Asier Riesgo.

The Frenchman has been linked with Bilbao since the beginning of last season and even declared so publicly his ambitions to make the move across the border.

The 26 year old finally seals his move to the San Mames Barria on £50,000 a week, declaring he’s here to win things.

“As a Basque man, it’s with great pride I stand here before you and sign today. Bilbao is a great club capable of even greater things and I’ll fight for every chance we get.

“There are some very nice foundations here and last season’s form was a deciding factor for me. I’m looking forward to participating in competitions such as the Champions’ League and showing the world what we as a team can do. It’s a phenomenal project.”

Ruffier will be handed the number one jersey, casting further doubts over Gorka Iraizoz’s future at the club.
Login to Quote

k1rups
8 years
Just caught up with this and I have to say with the players you have at Bilbao and losing Herrera, 2nd place is an awesome achievement and a tough loss in the CDR :(! I look forward to seeing the heights Bilbao can reach! 21 mill for Ruffier though is insane! I would have looked at a couple of others but he's a good keeper on FM.
1
Login to Quote 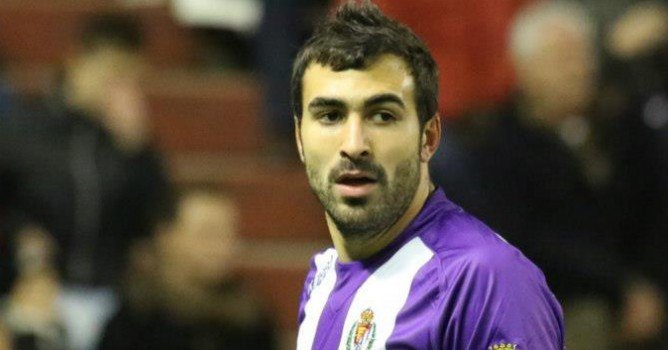 Mikel Balenziaga has joined Atletico Madrid in a deal worth £5 million after just one season with Athletic Bilbao.

The left back who joined Bilbao last season from Real Valladolid played second fiddle for much of last season to 20 year old Jon Aurtenetxe and found himself transfer listed by the club.

Balenziaga signs a three year deal with Atletico Madrid on £19, 500 a week and is expected to play as back-up to Brazilian full back Filipe Luis.

Also on his way out from San Mames Barria is the young winger Isma who joins newly promoted team Sporting Gijon for £750, 000.

Isma played mainly for the Bilbao reserves last season and joins Gijon on a four deal having appeared 13 times last season, scoring and assisting just the one goal.
Login to Quote 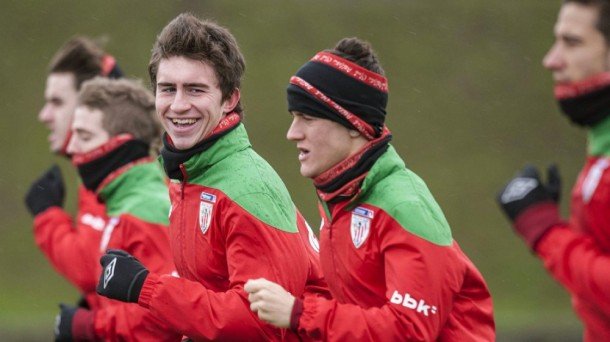 Promising playmaker Galarreta joins Real Betis until the end of the season after appearing just 13 times for the first team last season.

Real Betis has agreed to pay a fee of £60,000 monthly in order to loan him in for the rest of the season.

Laporte proceeds with his progress at Real Mallorca having joined them little less than six months ago last season.

The ‘Islanders’ were keen for the Frenchman to return likewise was Bilbao boss Oceano Cruz.

“It made sense for Laporte to return to Mallorca after he impressed there last season. He played 15 times for them last season and I trust he’ll be needed even more this season which will be very beneficial for both him and us.

“Laporte and Galarreta are two players we hold in very high regard for the future and it’s in our best interest they get vital minutes under their belt which we simply can’t offer to them at the moment.”

Laporte, unlike Galarreta joins Mallorca for no loan fee but will remain at Mallorca for the whole season unless Bilbao choose to recall him.
Login to Quote

BILBAO SPLASH OUT ON MONREAL 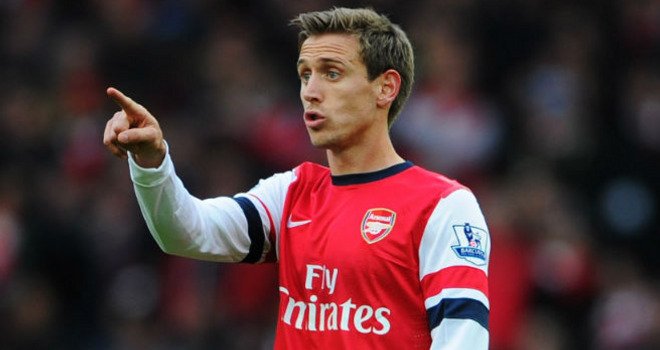 Arsenal has agreed to sell full back Nacho Monreal to Athletic Bilbao after they offered a huge fee of £17 million for his services.

The Arsenal man joined the ‘Gunners’ for a fee £8.5 million last season from Malaga and returns to Spain after an impressing in his first season in the Barclays Premier League.

Arsene Wenger was believed to be reluctant to let the Spaniard go but felt the offer from Bilbao was too good to refuse with Kieran Gibbs understood as his favourite of the two left backs.

The former Osasuna player will sign a four year deal with ‘Los Leones’ which is reported to hit up to £100,000 a week in bonuses and prize money.

Despite playing for rivals Osasuna, Monreal is confident his past will be ignored by fans when judging him on his abilities and that he is only focused on the task ahead.

“It’s a difficult environment to come into but one I hope both sets of fans will get over. I’ve come here to better myself and play games so hopefully all the talking I need to do will be on the pitch.

“I really enjoyed my experience at Arsenal but perhaps sharing a position with players like Kieran Gibbs will be best to do at home. Here at Bilbao I have space to manoeuvre and affect the squad linguistically in a way I couldn’t do as easily at Arsenal.

“Furthermore, it is a very exciting time to be at Bilbao and the project that is being created is something that really appealed to me. This is the main reason I’m here. Not because of salaries or sharing game time. I am here to win and be part of history.”

Monreal will be given the number 17 shirt number which he also wore during his time in North London.
Login to Quote 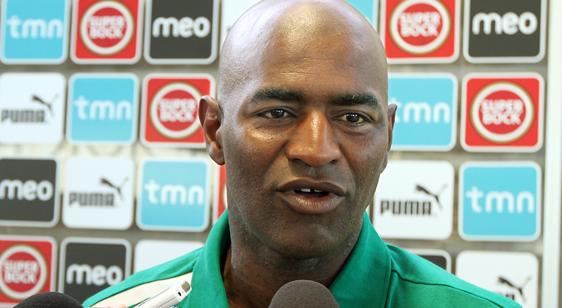 Oceano Cruz has come out in defence of his big signings after being criticised by the Spanish media for overpaying.

Athletic Bilbao recently purchased Stephane Ruffier for a fee of £21 million while that price tag was mounted on by Nacho Monreal’s £17 million move, leading to scrutiny from the papers the following morning.

However, Oceano has suggested that the fees were necessary for Bilbao to land their targets, claiming it is much harder for him to buy players than every other manager around.

“I think we must state the facts here and put them away early and the truth is that the price we paid for Monreal and Ruffier are higher than what we would originally believe them to be.

“However, I assure you that I wouldn’t have signed both if I didn’t feel they were capable of living up to their potential. The deals may or may not pay off like any transfer but these are risks I’m ready to take.

“Here at Bilbao, it’s much harder to sign a top player because we are obviously in search of Basque players. A parameter that is rare. Therefore clubs will try to get more from us as they know this would be one of the few chances we get to sign a potentially great player.

“It’s fairly reminiscent to the current state of affairs in Britain. The number of quality British players is diminishing and clubs such as Liverpool and Manchester United have to pay over the odds for players like Andy Carroll, Ashley Young, Wilfried Zaha etc. That’s the position we are in.

“Clearly it’s not ideal for us nor the players but we are professional enough to deal with such circumstances and I trust Ruffier and Monreal will be excellent marquee additions for us.”
Login to Quote 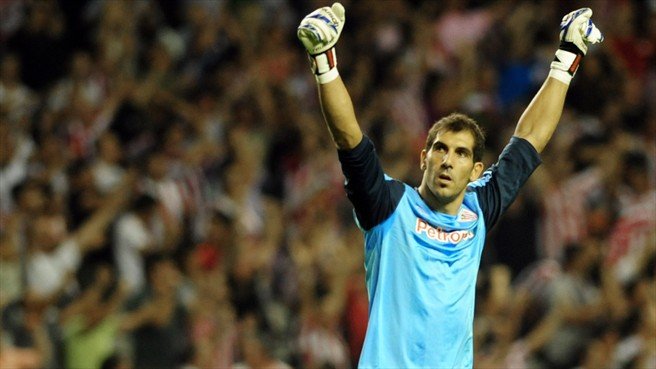 Athletic Bilbao goalkeeper Gorka Iraizoz has left after six seasons to join Sevilla for a fee of £6 million.

The 32 year old was expected to make a move following the arrival of Stephane Ruffier from Saint-Etienne this summer with Asier Riesgo happy to be second choice.

Iraizoz joins Sevilla on a three year contract as his wage hikes up to £61,000 a week with the club from Andalusia.

The Spaniard who started his career at Athletic Bilbao and affiliates Baskonia over 12 years ago played 182 times for the Basque club since 2008.
Login to Quote

Verdinho
8 years
I got something to show you guys. 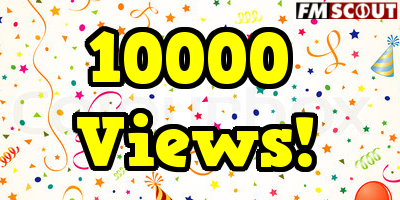 Thank you all so much for viewing this story. It's going strong and the hits this is getting is very motivating. I failed to surpass 4k views before this so who knows where this will end up! Thanks again