Godman
11 years • Edited
I decided to start a season with Manchester United and manage the new generation of stars.

My thinking for using these formations was that I want my team to play an attacking controlling kind of football so this is where the 4-4-2 and 4-2-3-1 come into it. I also need a defensive tactic for Europe and also when I come up against teams that have stronger midfielders or are generally better (Barcelona spring to mind). Plus I like my squads to know a variety or formations and tactic so when/if I need to change them they are ready to change instantly. 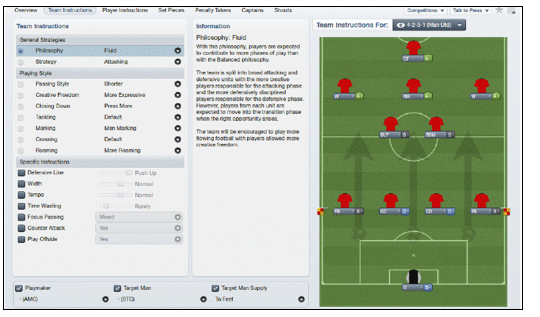 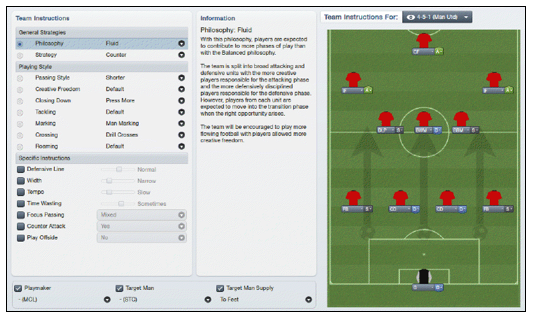 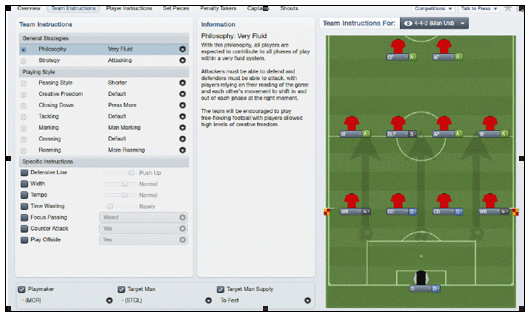 Godman
11 years • Edited
An average pre-season, with a couple of wins and a couple of draws. I was happy with the season as all my main players got up to match practice. I was also pleased that Danny Welbeck got a couple of goals and was in contention to start up front with Wayne Rooney at the start of the season but a injury before the Charity Shield stopped that. Also Rio Ferdinand was ruled out for 3 weeks at the end of the pre season.
Login to Quote

Started off well and Rooney grabbed an early goal and Nigel de Jong being sent off very early. However City grabbed an equalizer through Sergio Agüero and then Darren Fletcher got sent off for two yellow card offences. So It went to penalties and it did not start that will with Giggs missing the first spot kick however De Gea saved city’s 5th penalty so it went to sudden death and unfortunately, Phil Jones spot kick was saved and City won.
Login to Quote

The start of the season against Sunderland and because Javier Hernández and Dimitar Berbatov had been a bit off during the pre season, Michael Owen had just recovered from injury and with Welbeck being injured I decided to go for my 4-2-3-1 formation. Also I had Nani and Park Ji-Sung injured so I called Ravel Morrison into the first team squad for cover.

The game started and a long-range free kick by Ryan Giggs flew into the top corner to give United the lead. Wayne Rooney then grabbed is first of the season followed by a second strike from Giggs who was playing just behind Rooney causing all sorts of problems for the Sunderland defense. Giggs then slipped the ball through to Rooney who made it 4-0 before half time. After that Giggs had a long-range free kick that smashed against the bar and then hit GK and went in for an OG. Vidić then finished it off with a powerful header towards the end. First league game and a 6-0 victory.

Preparing for the Stoke game and got a message saying that Vidić would be out injured for 3 Months.
Login to Quote

6294
11 years
Good start to the season!
Good luck! Have you signed anyone?
Login to Quote

Not yet decided to start with no transfer budget in the first window.
Login to Quote

Good win 1-4 but a bit of bad news that Tom Cleverley will be ruled out for 2 months. In view this I called Paul Pogba into the first team squad.
Login to Quote

Won 3-1 with two poacher goals by Javier Hernández and a first of the club by Phil Jones from an Anderson corner. However Rafael conceded a penalty, which Kevin Doyle scored from.

Next game against West Brom is 14 days away because of an International Break; hopefully my players will all come back fit. Nani and Ferdinand also regained full fitness and were called up to the England and Portugal squads respectfully.

Injury News - Nani and Ferdinand both injured on International duty, Nani out for 3 weeks and Ferdinand out for 3 months. Phil Jones also picked up a knock and will be out for 1 week. Looking thin at the back now with only 2 centre backs.
Login to Quote

romiljain
11 years
Good going dude, but you will need a creative mdfldr as cleverly, anderson are not up to it... go for hazard!

Best of luck !
Login to Quote

# romiljain : Good going dude, but you will need a creative mdfldr as cleverly, anderson are not up to it... go for hazard!

I am looking at Eden Hazard and Mario Götze.
Login to Quote

Decided to rest Hernández and Rooney as I had the Champions League Group game next and the result could not have been better with Welbeck, Berbatov, and Owen all getting their first goals of the season. Also another beautiful free kick by Giggs resulted in a 1-4 victory. However it did come with a cost with Smaling getting injured and is not out for 4 weeks.
Login to Quote

My Champions League debut made worse with only one fit centre back, which meant Michael Carrick starting at the back (used him as a ball playing defender). Needless to say had a 4-0 victory with goals from Giggs, Evans, and young and also an own goal by Jeroen Simaeys. Also Carrick and Giggs both had fantastic games.
Login to Quote

Two from Berbatov and one each for Hernández and Young gave me a 4-1 victory. Also gave Morrison and Pogba their League debuts.
Login to Quote

Lost 2 -1. Took the lead through Owen but then Carlton Cole scored an equalizer that took the game into extra time. Kevin Nolan then scored from a corner. Anderson then had a penalty saved. Disappointed to go out and this was probably due to the fact that I had a very inexperienced back line. On another day I might have had a win as Welback had several chances and not to mention Anderson’s missed penalty. However a good performance from Michael Keane. Injury news is that Morrison is out for 5 weeks and Rafael is out for 2 weeks. Both injured in the second half.
2
Login to Quote