http://news.bbc.co.uk/olmedia/460000/images/_464007_fees_300.jpg
What A Busy Summer it has been , I managed to get Class signings but most of them didn’t come cheap but that’s the way it’s you know what they say” if you want to beat the best you got to buy the best”-Man city but moving on to the transfer market there was a lot of wheeling and dealing

http://www.fifa.com/mm//Photo/AFFederation/General/01/30/98/23/1309823_FULL-LND.jpg
I got a starting 45 Million Transfer budget and you’re all probably wondering why 70 first season and 45 second season the thing is that I had the currency as dollars then changed it to Pounds so let’s move on to the transfer’s joining

One Word to explain this Regens Regnes And More Regens

and the usual wonderkids 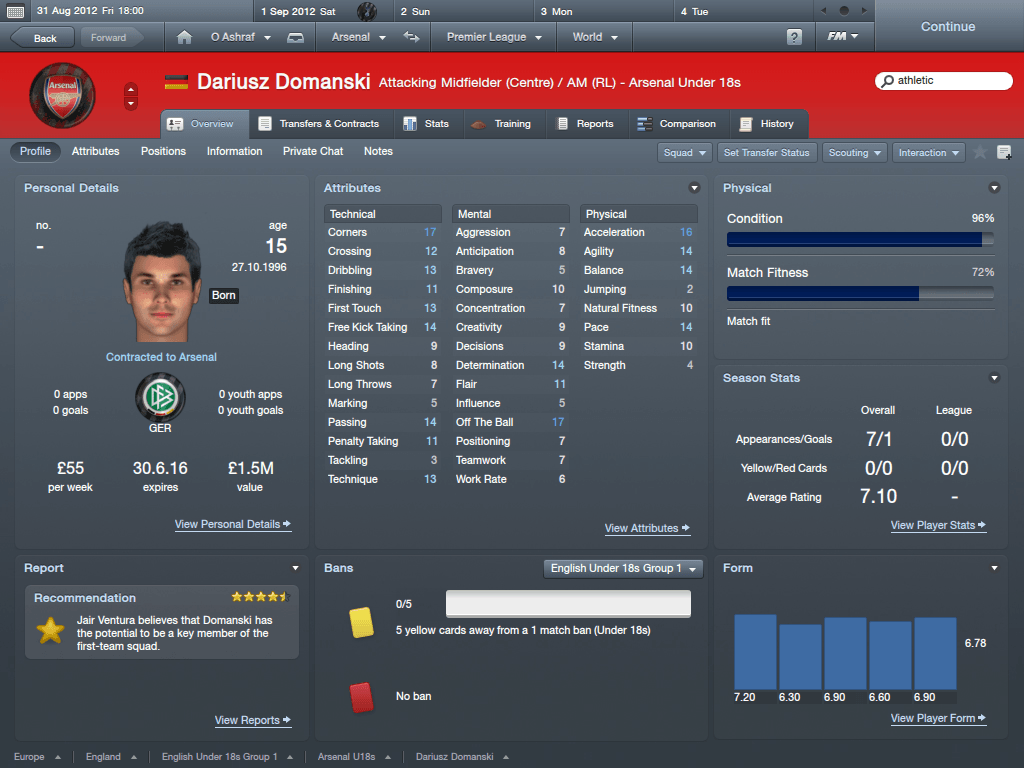 Just A regen predicted to be one of the best player in that club
Value :1.5 Million From Leverkusen 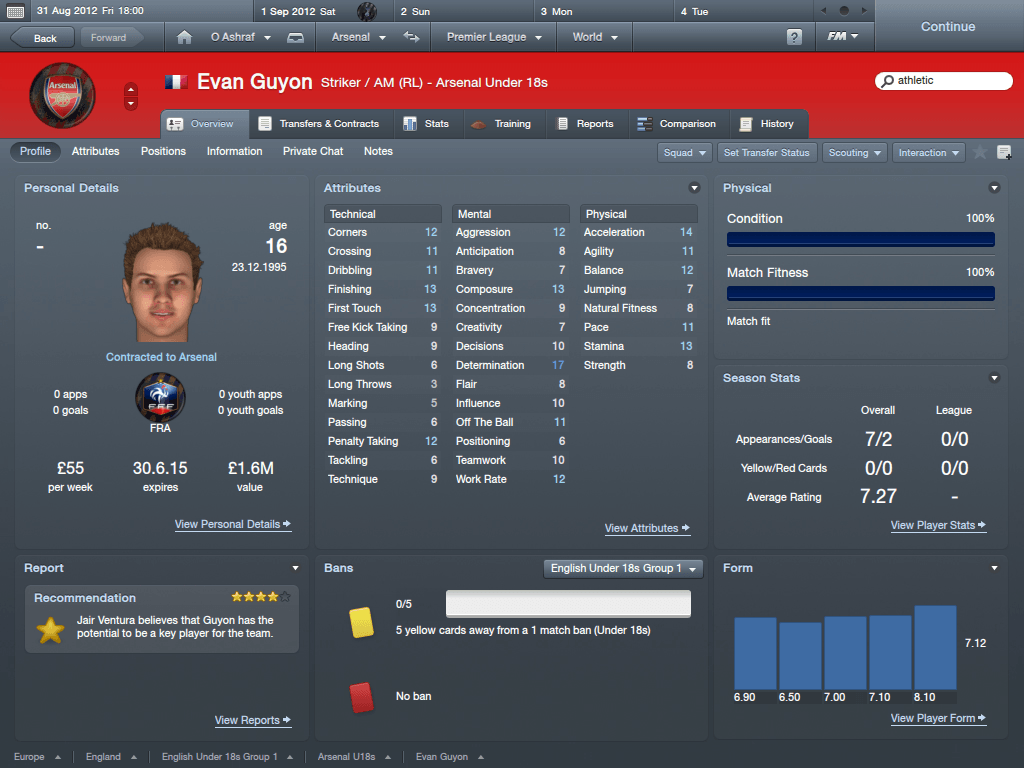 Yet another regen also classy will be useful in the future
Value: 1.6 Million From Sochaux 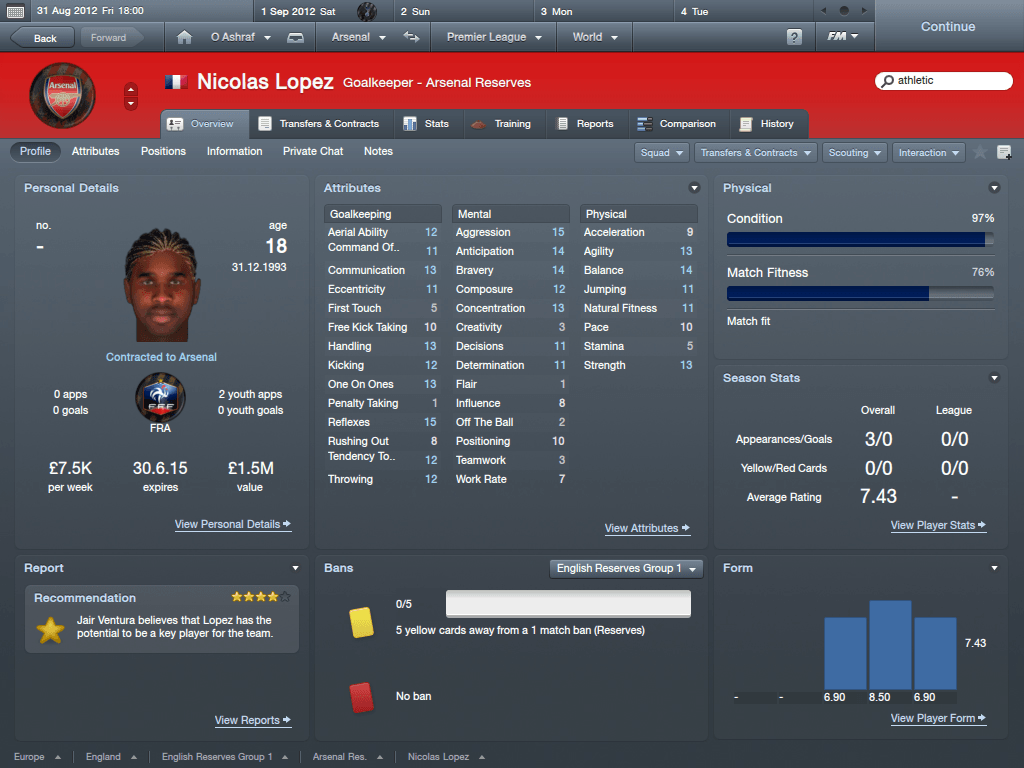 A Goalie Regen but I think Ter stegen is good for 10 years more so he’ll have to tolerate going on loans and sitting on the bench
Value : 1.5 Million From PSG 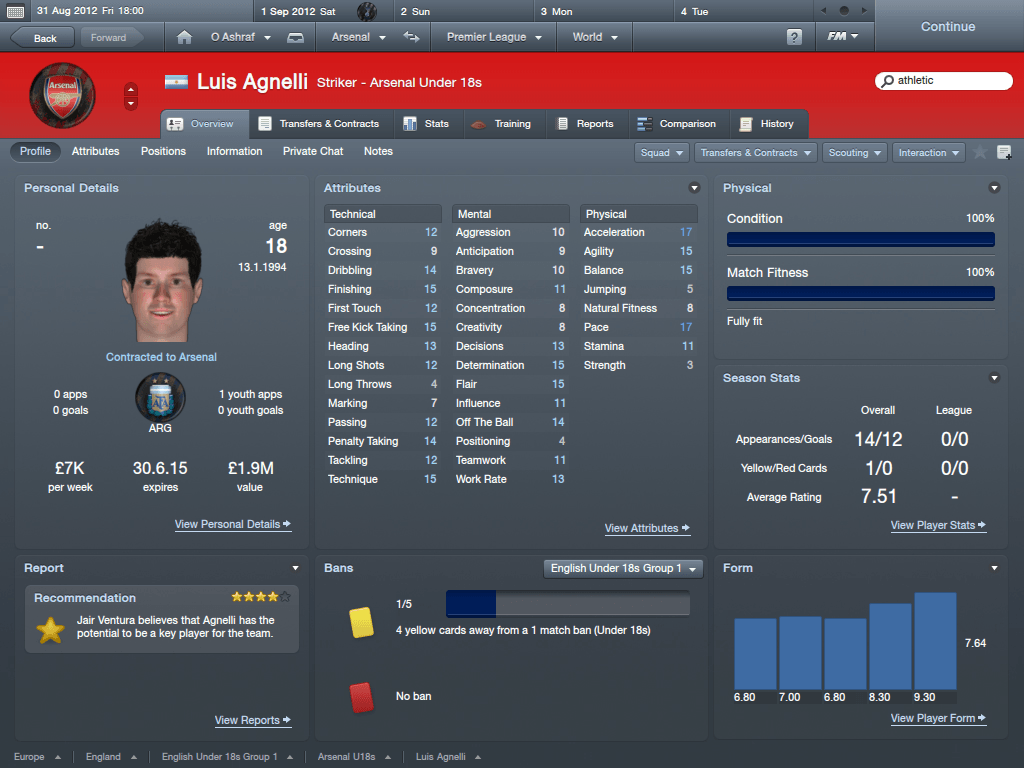 Now that’s a great player I predict that he will become the next higuain not safe to say messi really
Value : 1.9 From Velez 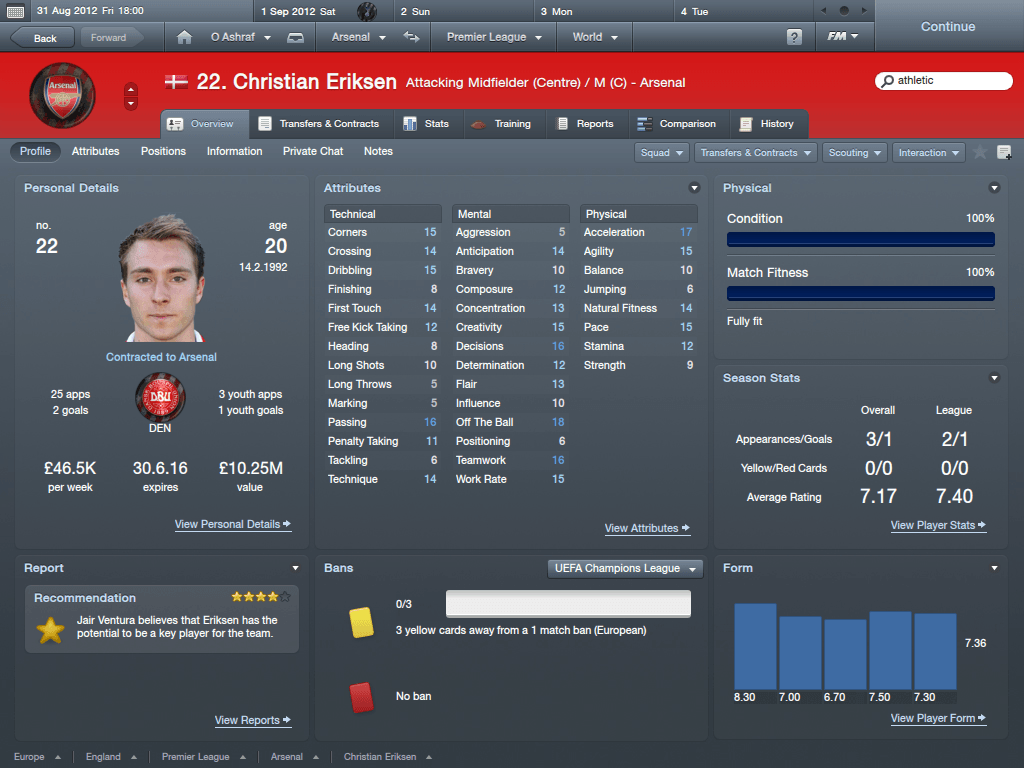 The Master Of the Scoop Turn ! LOL a great player can play as a CM and a AMC And Can Be Trained to play on the both wings
Value : 10.25 Million From Ajax 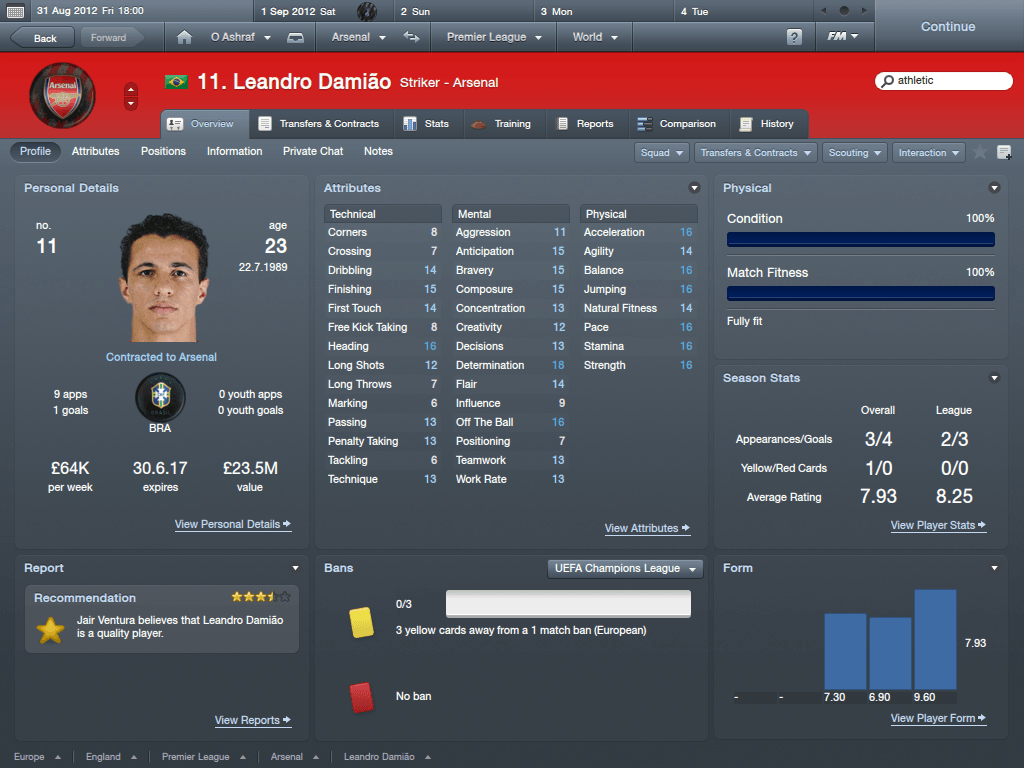 One of the best young strikers in the game would be good for another 7 or 9 years so I’m happy
Value : 11.25 Million And 12 Million Over 48 month From Internacional 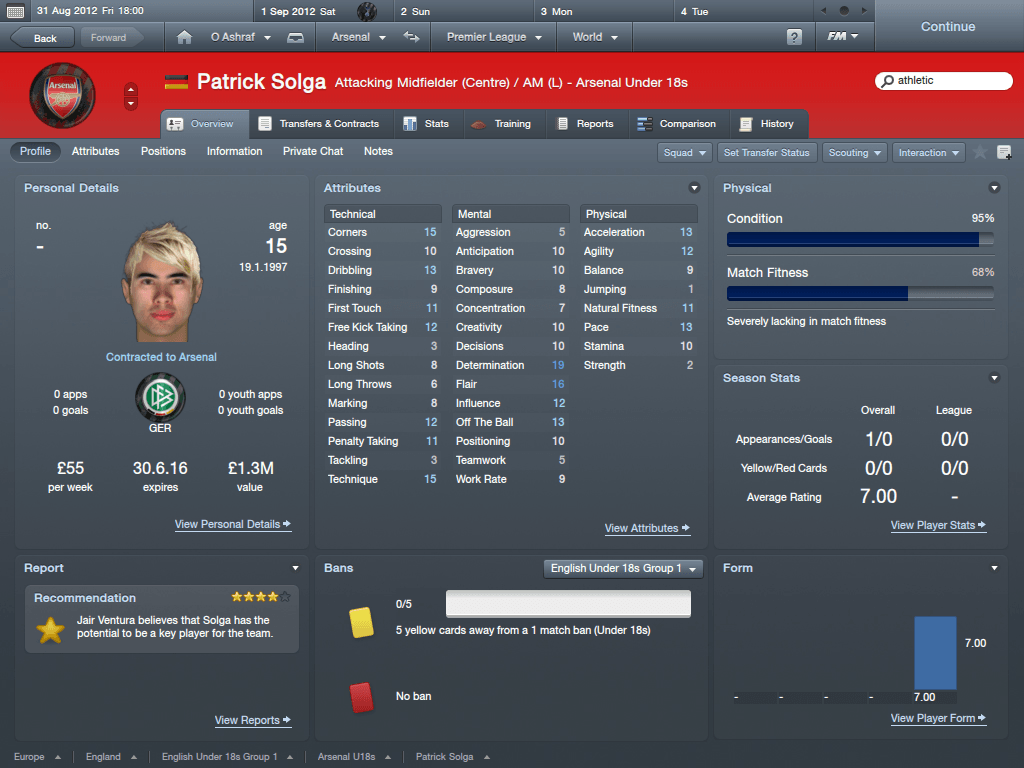 Yet another Regen with a four star rating (I Love my scouts )
Value :1.3 Million From BVB 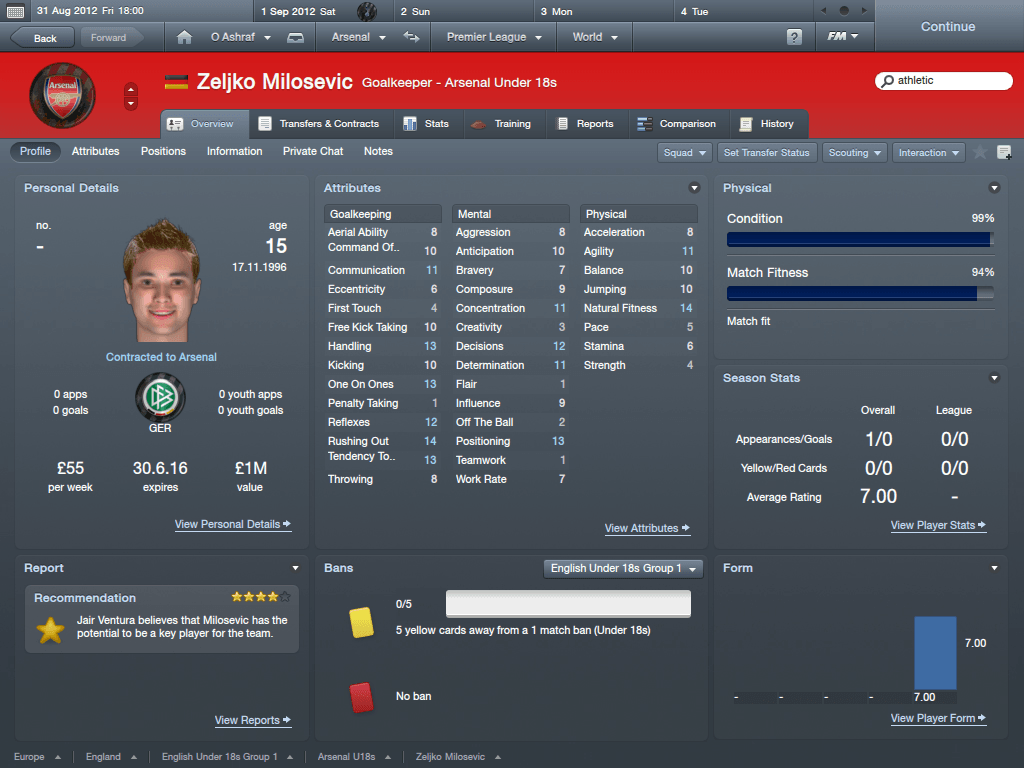 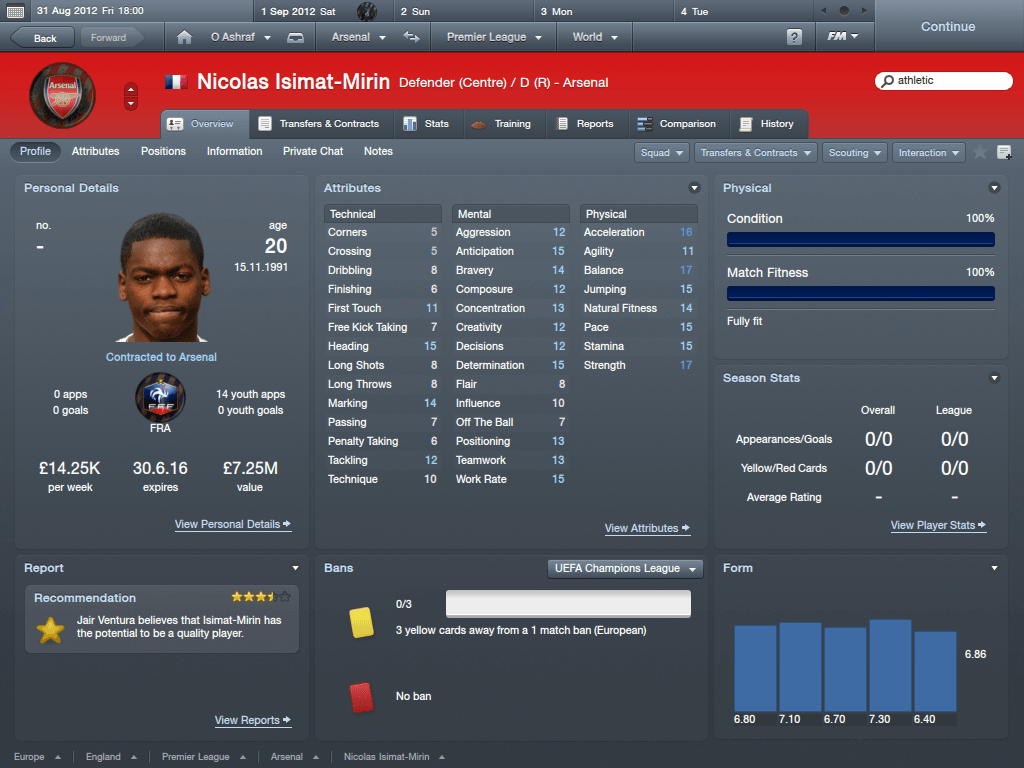 A good defender with a bright future got him after I loaned koscielny again
Value: 7 Million From Valenciennes

Net Transfer Spent : -17 Million With 23 Million Left in the bank cause I’m waiting for the Brazilian regens (that sounded a little bit peado LOL)
That’s It Lads Next Is the Community Shield Special which Was A Thriller

Oh and also Give this fella story a look (normally i don't share competitions but that's ok ;)The-Arsenal-way
Login to Quote

shaneo insaneo
9 years
good buys so far in the off season . looks like a bit of a chop and change but will be interesting to see how it goes

#59207 shaneo insaneo : good buys so far in the off season . looks like a bit of a chop and change but will be interesting to see how it goes

Akash
9 years
Why am I not surprised with the buys? It is Arsenal, after all, and most of the buys are below the age of 18.
Login to Quote

#59408 akash.vidyasagar : Why am I not surprised with the buys? It is Arsenal, after all, and most of the buys are below the age of 18.

Something A Bit new 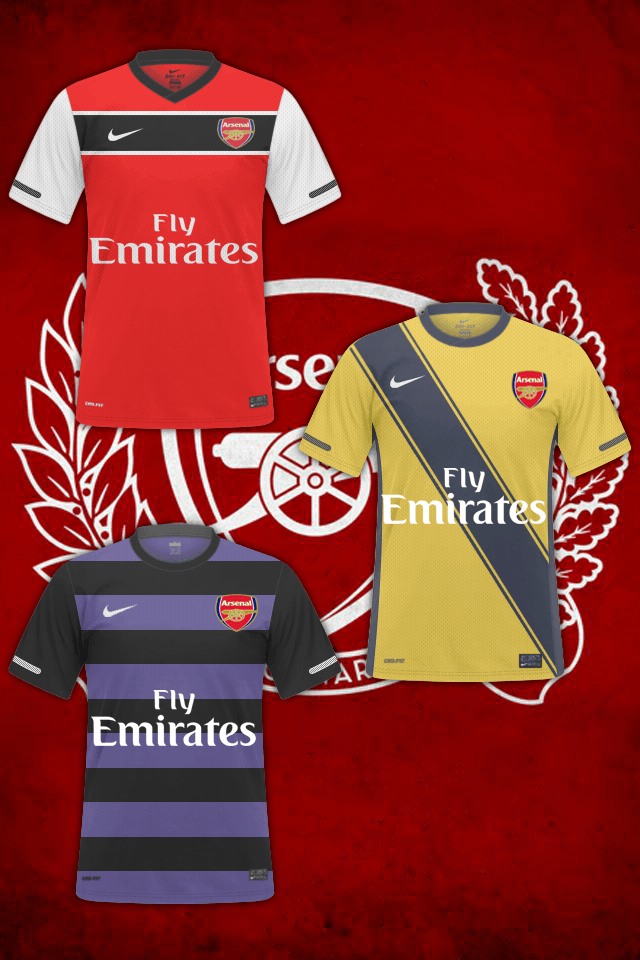 Ok lads as you all know i just finished my first season and i got bored from the old kits so i decided to make my own...i know they look bad but they will do the trick

Community Shield update will be up by today
Login to Quote

YoungOwl
9 years
The kits actually look pretty nice, although the badge on the top kit looks a bit distorted, might be from the image being resized

joesmithy
9 years
great story mate, looks really good! look like you are putting a lot of effort in and the kits are great!
Login to Quote

#59462 YoungOwl : The kits actually look pretty nice, although the badge on the top kit looks a bit distorted, might be from the image being resized

• Reach the Semi Final of the champions league
• Win A Domestic Cup
• Try And retain the Premier league
• A bit personal but Get manager of the year again ;)
Login to Quote

http://www.footybits.co.uk/images/arsenal0203community.jpg
It’s D-Day Premier League winners Arsenal play their Fierce rivals FA Cup winners Tottenham Hotspurs For The bragging rights of who’s the best London club and the we also get to walk home with that plate oops I mean shield So let’s move on to the mean stuff

The game started slowly both team trying to keep their net clean at least for the first half and it was all going fine both team battling for the ball in the midfield till aaron lennon knocked the ball past vermaelen and crossed it to arrive at the head of Gyan at the back post Which all he needed to do is to just nod his head and he done it and scored to make it 1-0 to the spurs,I began to worry cause tottenham parked the bus and we kept and there was a couple of yellow cards on both side it was going badly till 64 minute when sime vrsaljko intercepted van der vaart pass and played it to eriksen trying to launch a counter attack and eriksen played a throw ball to podolski who also set robin van persie 30 yards away from goal van persie rounded dawson then set up damiao with a nice throw ball to make him one on one with gomes in a really tight angle which is nearly impossible to score from but he tricked damiao and shot the ball in the close angle to make it 1-1!. 60 minute in an arsenal shirt and the fan already adore him, Me too really ,the game kept on going to our favor but chance after chance wasted we were taken to the dreaded penalty shootout ….. With a German goalie and a German penalty taker on my side nothing could go wrong, eh? Didn’t let any English player take a penno though cause I’m not that stupid

The New kid did it I can’t think of a better debut ! we have won the community shield so I’m happy

That’s it lads for today will sorry that this update was too long if you hated it sorry if you liked it get used to it!
Login to Quote

Akash
9 years
Congratulations on the win.
Look at Tottenham's penalty takers - only one of them are currently in their team (in real life).
Login to Quote

You are reading "Arsenal Gunning To Glory".