"I dreamed of making KuPS a fortress of invincibility. A team which everybody would fear and would crumble against."
This was my dream, something which I wanted to make a reality. I believed that I could take KuPS to the very top but I needed a tactic for the Finnish team.

I had originally been using a tactic which I have had for nine different Football Managers. It was ok but it had it's faults. I needed a tactic which would allow me to control the game and be strong attacking and defensively. I looked at why teams like Barcelona and Real Madrid were great. They had a contrast in styles but they had a similar core. This core was the short-passing made famous by the Spannish. I believed that it brought fluidity in to their football. This is what I wanted.

I built this tactic for my second league season and I remained unbeaten, aswell as winning the Cup and securing passage to the Champions League Group Stages. You might say that this was an impressive feat for a Finnish team. I considered it a great feat for the tactic which helped me beat teams that wee a class above.

The name of the tactic, Banzai Tiki-Taka, is from the tiki-taka and from a KuPS chant called "Banzai". They sing this when they are playing important cup matches or in Europe. It is quite emotional and I feel it fits the tactic. 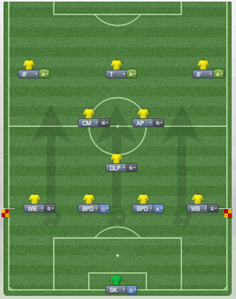 Centre Backs: The Centre Backs (Ball Playing Defenders) very much add to the passing as they link up play when the ball must go backwards. One is a stopper who goes out to an incoming striker, while the other one covers for him. It is important for them to be good defenders but to have an okay First Touch and Passing attributes for the passing side of their game.

Full Backs: The Full Backs (Wing Backs) are deeper than original wing backs but this brings a lot of balance to the defence and still adds to our attacking play. It is important that they have good Pace and good Stamina as they must run up and down the flanks all game.

Defensive Midfield: We have a Deep Lying Playmaker in the DM position who will stay deep to remain as a passing option aswell as breaking down any opposing counter-attacks. This player must have good passing and tackling stats. High Creativity is also an important asset.

Centre Midfield: There is one plain Centre Midfielder accompanied by an Advanced Playmaker. The centre midfielder will do his role of defending and attacking. The Advanced Playmaker will look to get the ball around and make the killer passes. A very creative midfield, if you have the right players. Passing and Work Rate are important stats as these two midfielders should be running and passing all game long.

Wingers: The two Wingers play as Inside Forwards who swap sides often. They look to find a way around the opposing defenders by making manipulative runs and beating them when they have the ball. They are part of the front three and are expected to chip in with the goals. Good Dribbling, Flair and Creativity make for good Wingers.

Attacking Midfield: This is the Trequartista position, or the False No.9, which was made famous by Lionel Messi. The player is not an out-and-out striker but he leads the line in attack. The player uses his Dribbling and Creativity to make chances for himself and for others. He is part of the front three and will grab many goals and assissts. He should have good Dribbling, Flair, Creativity and Finishing is a nice bonus too. 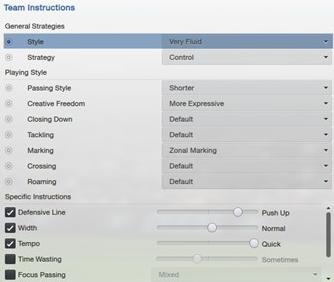 This tactic utilises a very fluid, controlling game. We achieve this through quick-tempo short passing and high creative freedom. This allows for free-flowing attacking moves.

Defensively, we push high up utilising the offside trap. We do not counter attack. We mark zonally so that fast strikers on the other team cannot catch us out.

These shouts mean we keep the ball at all costs. We very much focus on making gaps in the opposing defence and working the ball in to the box. Our fast-paced attacks pull defences one way and then another before breaching the gaps.


These are the first set of results with my tactic: 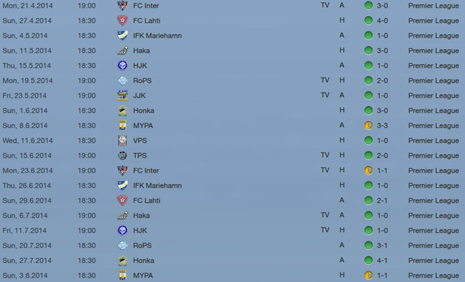 These results were from when we had a relatively injury-free squad. In these nineteen games, we won sixteen and drew three. We kept thirteen clean sheets from this set of games, which is a very good ratio. I found that we dominated most games and the three draws were down to a very tired squad or from a lot of injuries.


I highly recommend this tactic to those who have a very technical squad. Teams from Spain, Portugal, etc. will have a field day with this tactic. I hope that this tactic works as well for you as it did for me!

About The FM Rookie

I'm Nick Johnson and I'm from Ireland. I'm part of the staff here at FM Scout aswell as being the head judge for the Story of the Month and Story of the Year competitions. I run our official YouTube channel too. If anybody ever needs help, I will try to help them as best as I can.