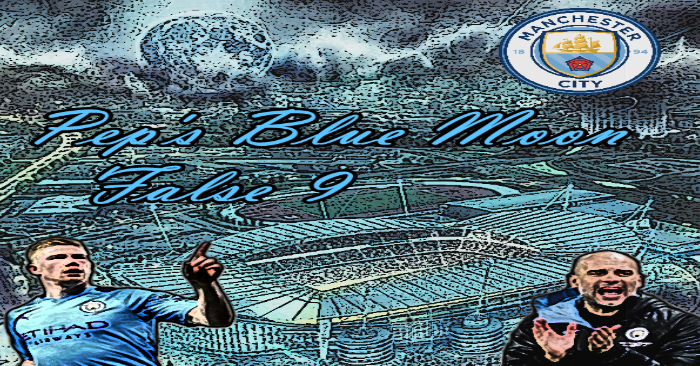 
Pep Guardiola will no doubt be remembered as one of the greatest football managers of all time. A disciple of Johan Cruyff, Pep is a major reference point for aspirational coaches around the world, with many inspired by his ‘Juego de Posicion’ philosophy.

After seeing Liverpool run away with the title in the 2019/20 season, Pep has sought to reinvigorate his City team with many experts predicting that this season would see City finish second with Guardiola needing to rebuild his squad to truly challenge for the league again. This season is arguably the biggest challenge faced by Guardiola in his managerial career to date with the loss of key players through injury and games coming thick and fast due to the pandemic. This observation looked to be spot on as City struggled for consistency and fluency at the start of the season drawing with teams like West Brom and Newcastle.

City headed to the capital to face Chelsea as huge underdogs, given the form mentioned above coupled with the loss of numerous first-team players due to of a Covid outbreak, making their performance on the day even more impressive sweeping to a 3-1 victory which could and should have seen them win by more. After a sluggish start, City clicked into gear with 3 goals in 16 minutes to stun Chelsea and put the rest of the title contenders on notice.

Chelsea set up in a 4-3-3 with Werner playing as the striker, Chelsea expected to have less of the ball and set out to counter quickly through the German's pace in behind. City deployed De Bruyne as the False 9 and he marked Kanté stopping Chelsea from playing through their single pivot, City's wide players Sterling and Foden then pressed Chelsea’s centrebacks on their outside shoulder to stop them passing to their full-backs forcing them to play through the middle.

City's midfield trio were similarly organised with their pressing movements Silva, in particular, was brilliant as he was able to both occupy Mount and press Chilwell making Chelsea's only option to play lofted balls into Azpilcueta. Rodri covered the space behind to prevent Chelsea's front three dropping deeper to receive the ball between the lines. 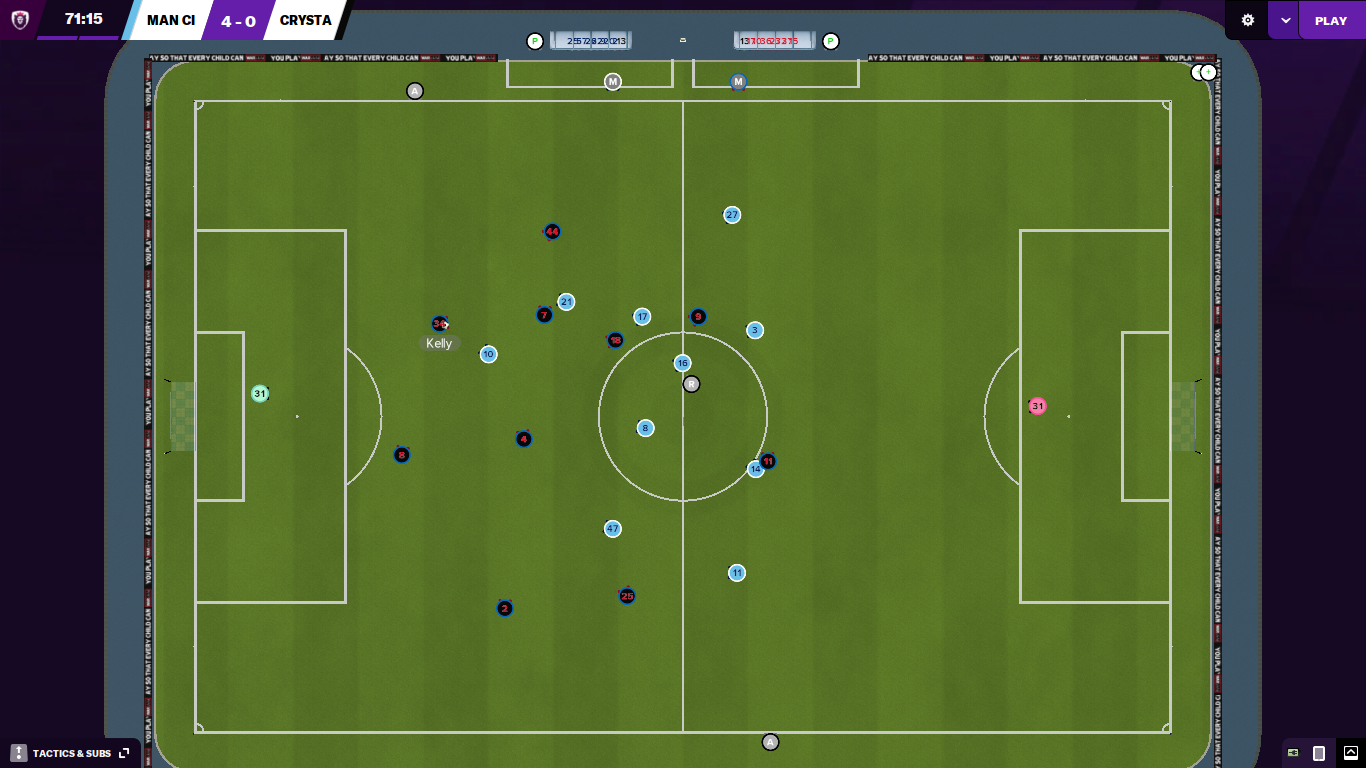 In-possession City were full of intelligent movement confusing Chelsea and provided the backbone for City’s win. João Cancelo, playing at right-back, was more often found as a right-sided central midfielder. Rodri slotted between the centrebacks to create a back preventing a 2-3 in Chelsea's attacker's favour. With Zinchenko pushing up down the left and De Bruyne coming deeper caused all sorts of trouble for Chelsea whos midfield were always outnumbered which allowed one of City's midfielders to break the lines into the space left by De Bruyne pulling out the Zouma in particular.

The fluid movement between Foden, Gündogan and De Bruyne on the left posed a constant threat. With their positions and movement creating the space, for each to exploit. With De Bruyne dropping into the space between Chelsea’s defence and midfield, Gündogan working to offer support and Foden running in behind as the third man to break the lines of the Chelsea defence. 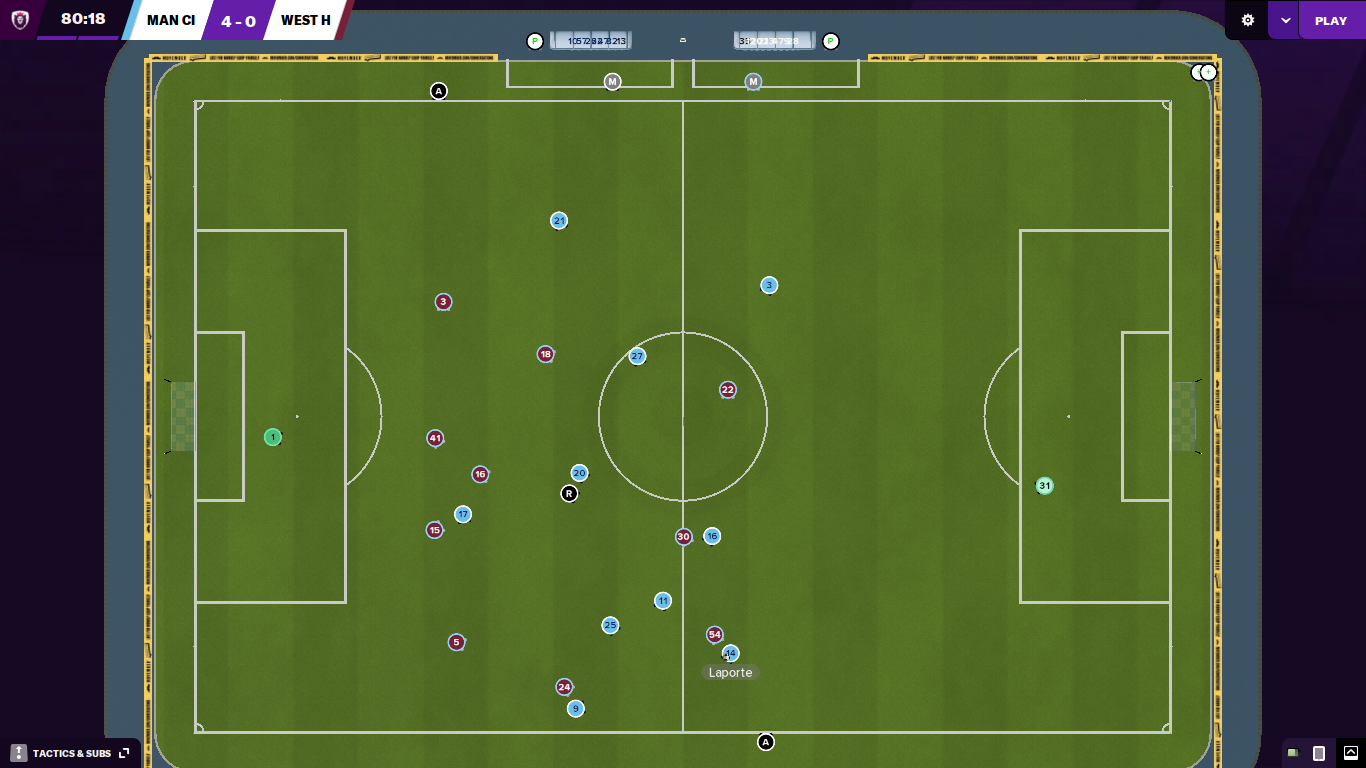 Implemting the tactic in game


First, of the all the formation is the 4-3-3 and to help encourage the interchanges and movement of players it is a very fluid and positive mentality. To replicate the movements of Rodri the halfback role is used, with the fullbacks being IWB's. 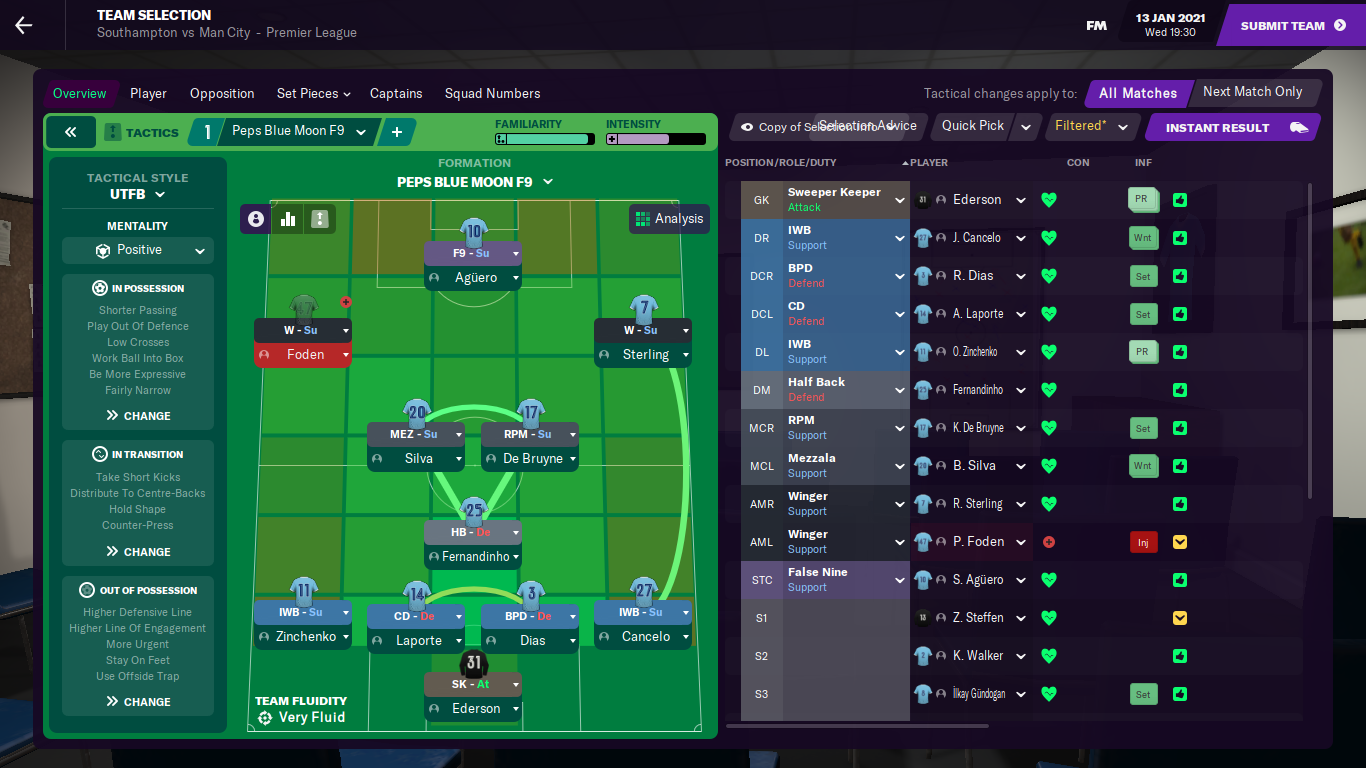 With the ball City played with patience moving the ball with crisp and short interchanges with the aim of opening and creating space for a midfielder runner to break the lines. Be expressive is selected to encourage players to roam from their positions and look to play in the open spaces, as City used wingers who made diagonal runs into the box I went with a fairly narrow width to help get them breaking into the box rather than hugging the touchline. The Gündogan role is the mezzala to help promote the overloading of the left channel. 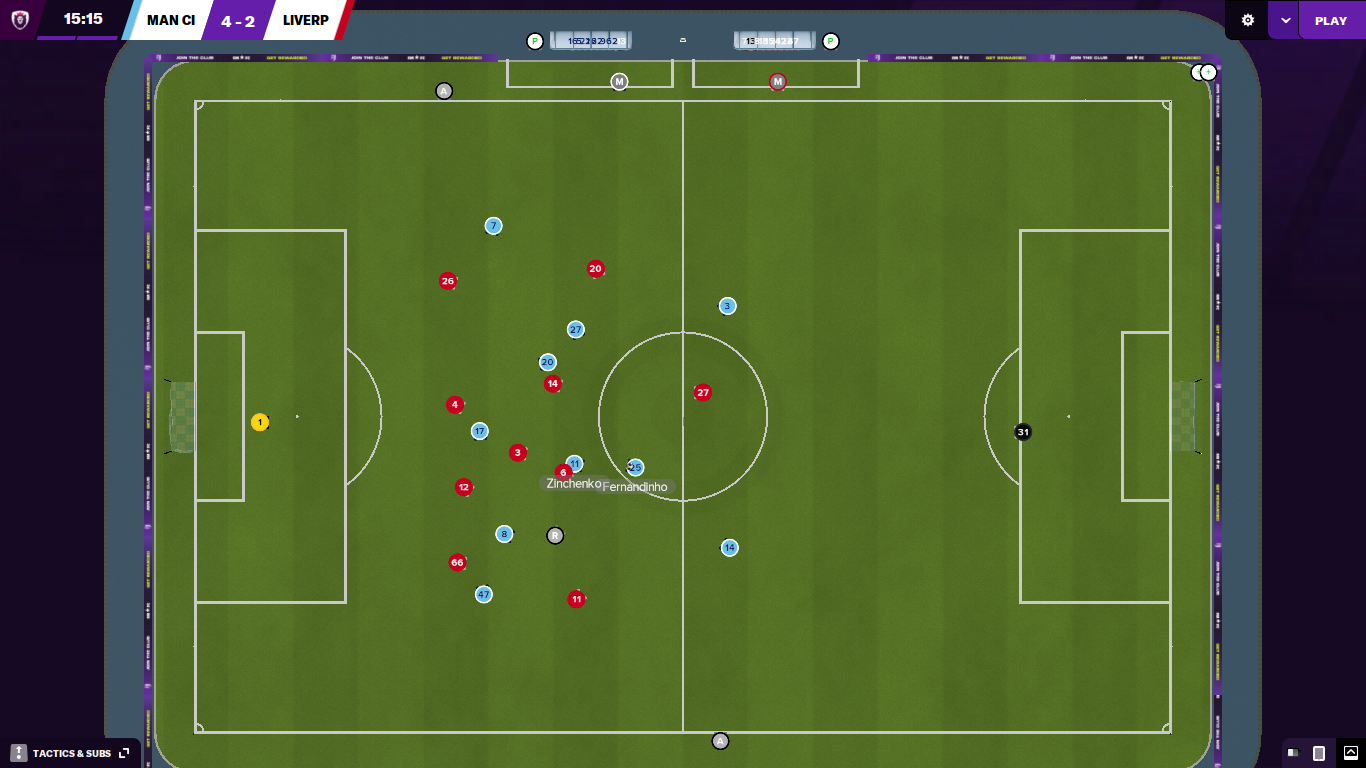 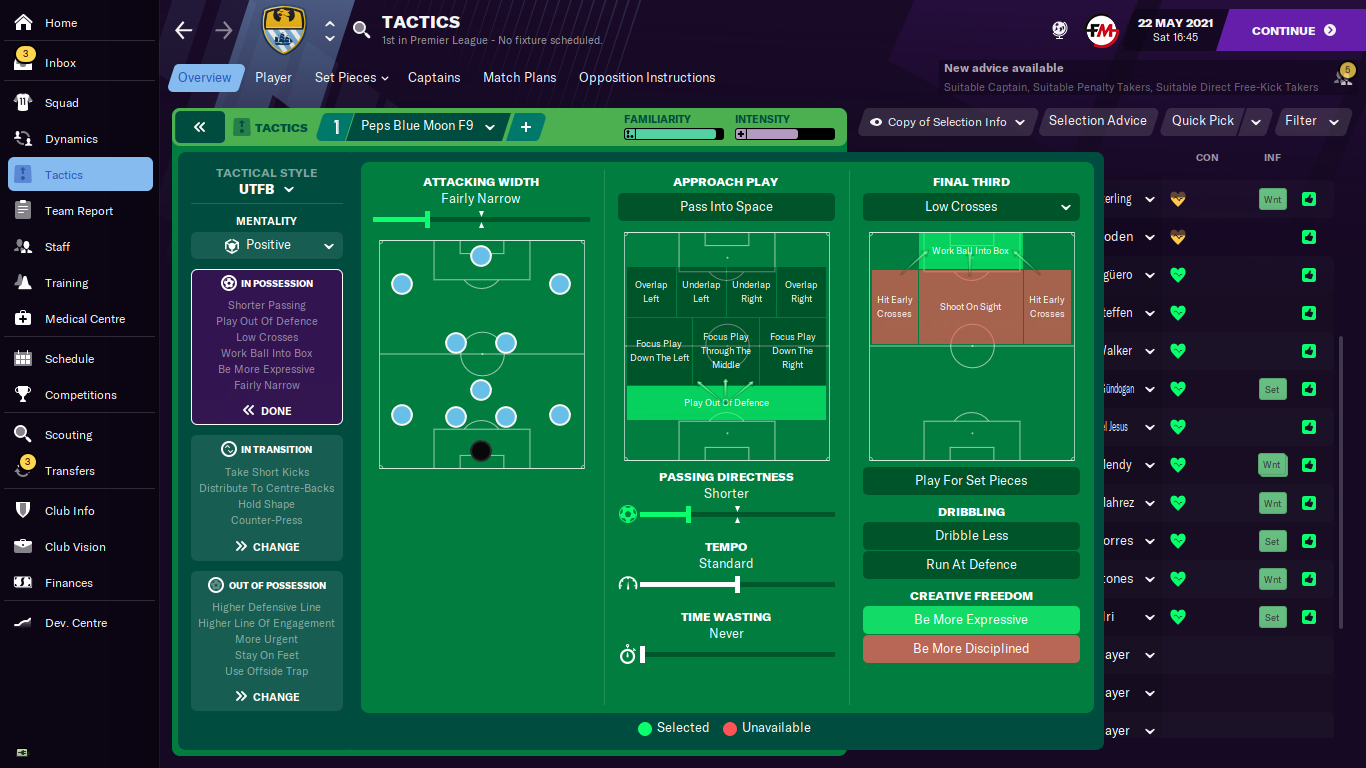 Without the ball, City sat in a Mid to High block with the defensive line being higher and the line of engagement being standard, allowing Chelsea to have the ball at the back before triggering their press. As always City played out from the back building their attacks from deep outnumbering Chelsea to beat any pressing attempts. 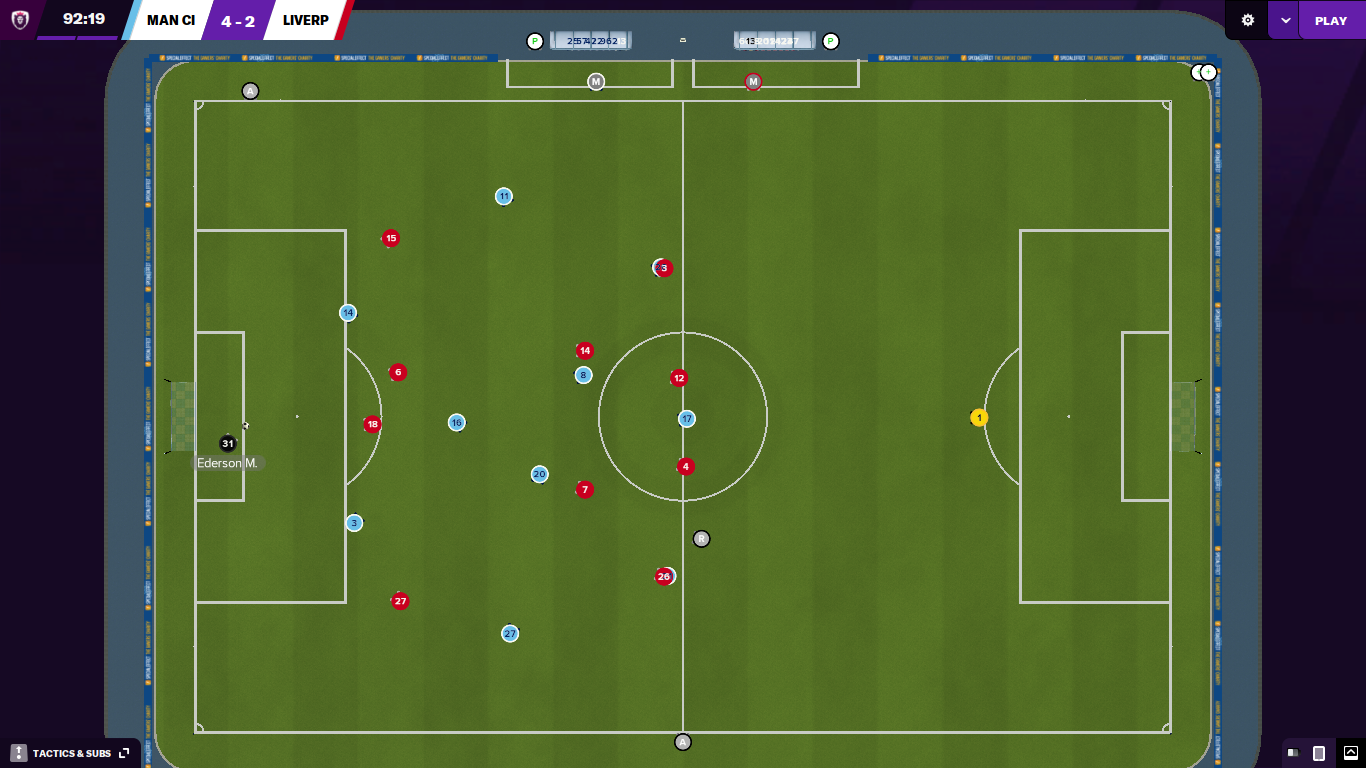 City defended zonally but also employed man-marking to certain players with KDB following Kante etc. They pressed with intent once Chelsea's centrebacks had the ball using cover shadows and man-marking to make it difficult for the Chelsea to advance the ball through their midfield. 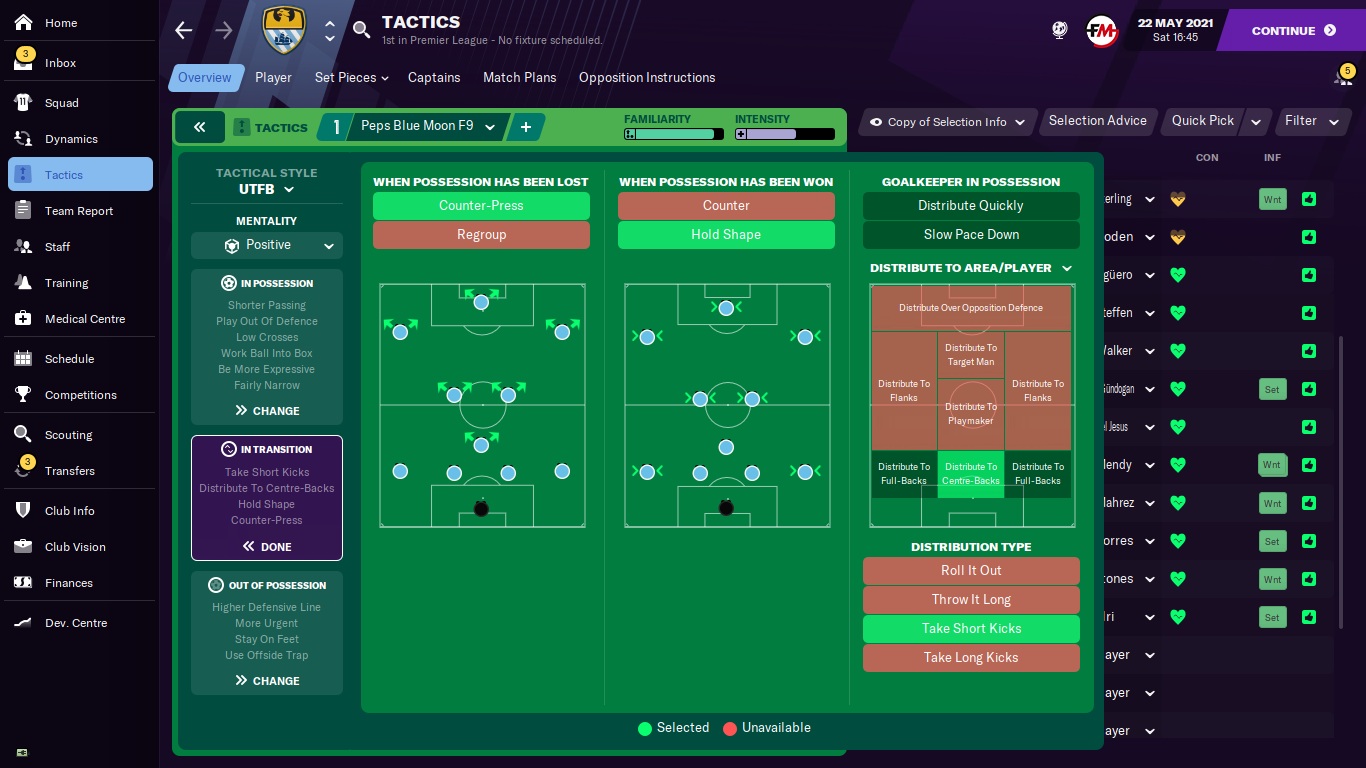 City's defence was able to step up on a number of occasions and catch Werner in particular offside. They also rarely went to ground when defending, therefore, stay on feet is ticked with a standard defensive width due to having the IWB's. 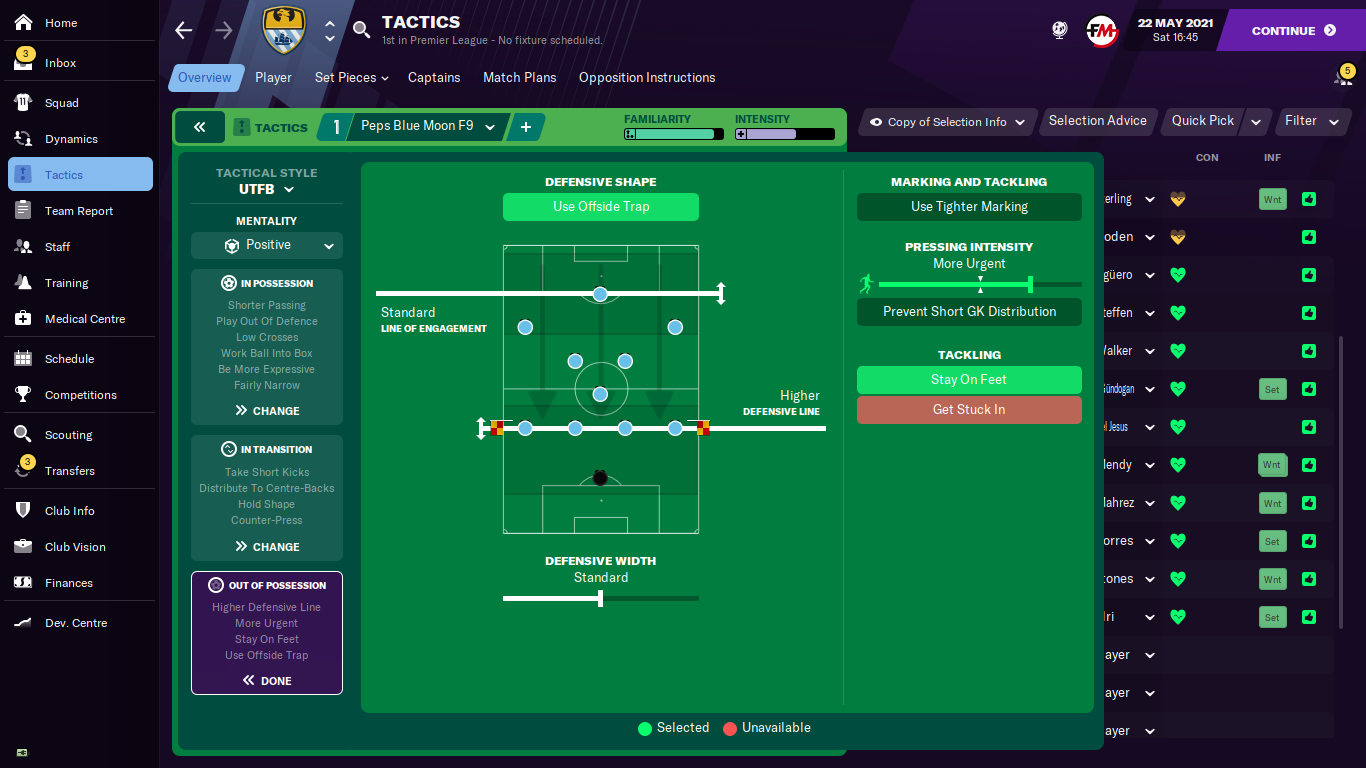 
Some great results with some beautiful football played, I achieved the league and FA cup double, and rather realistically lost in the quarter-finals of the champions league to Liverpool. 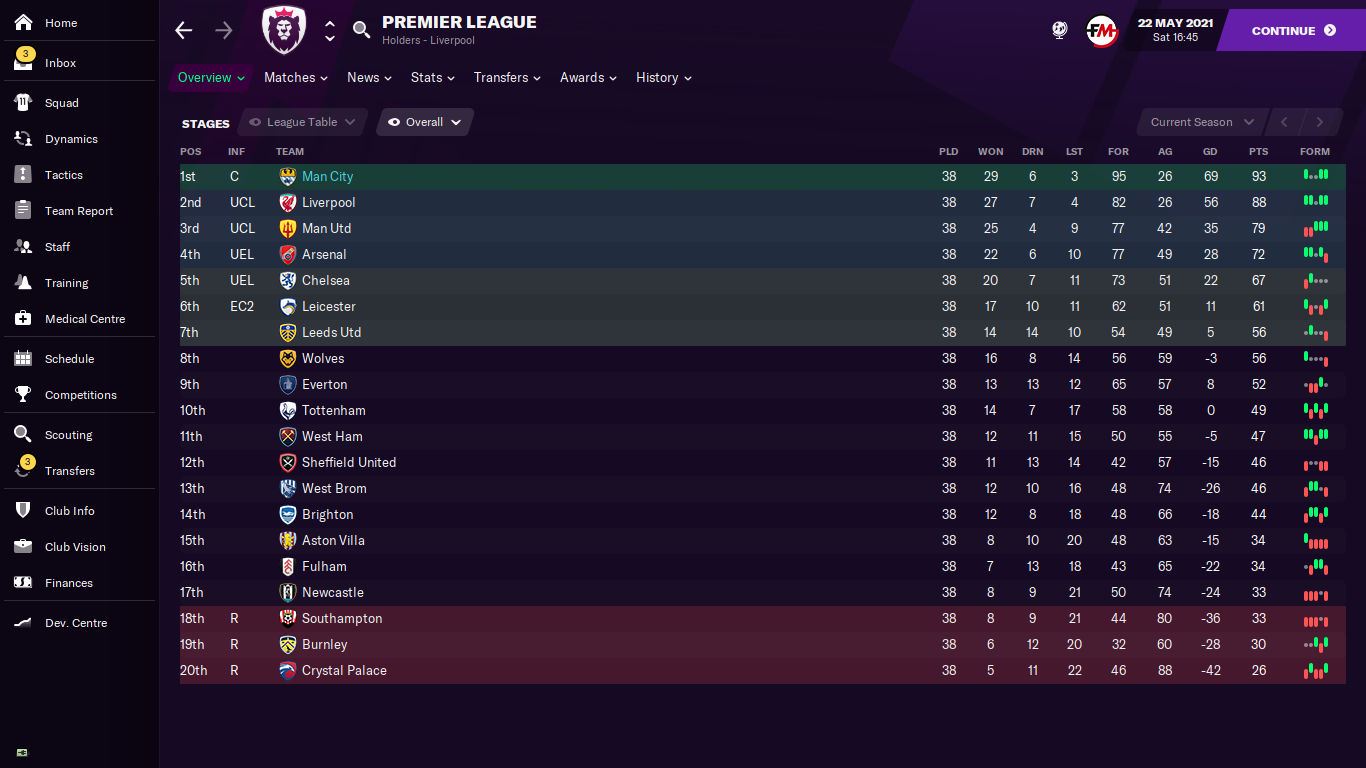 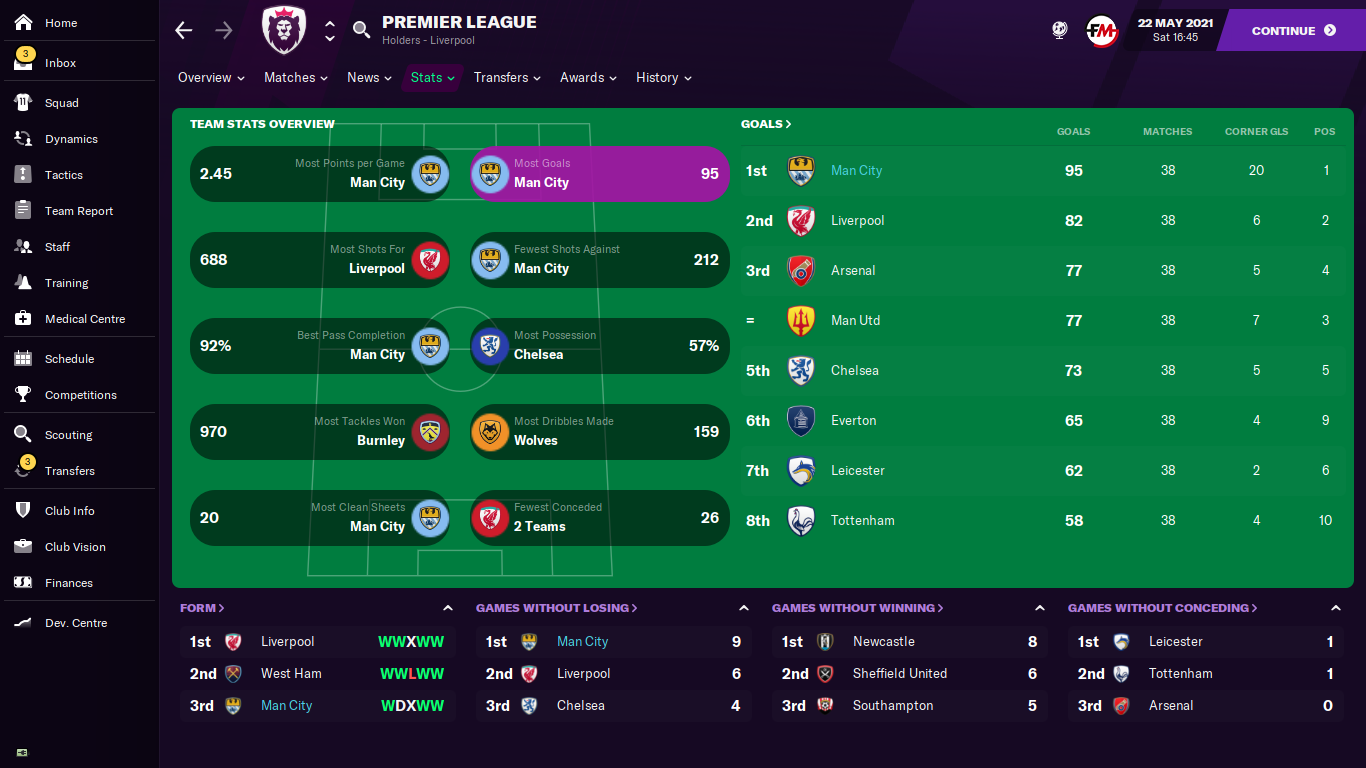 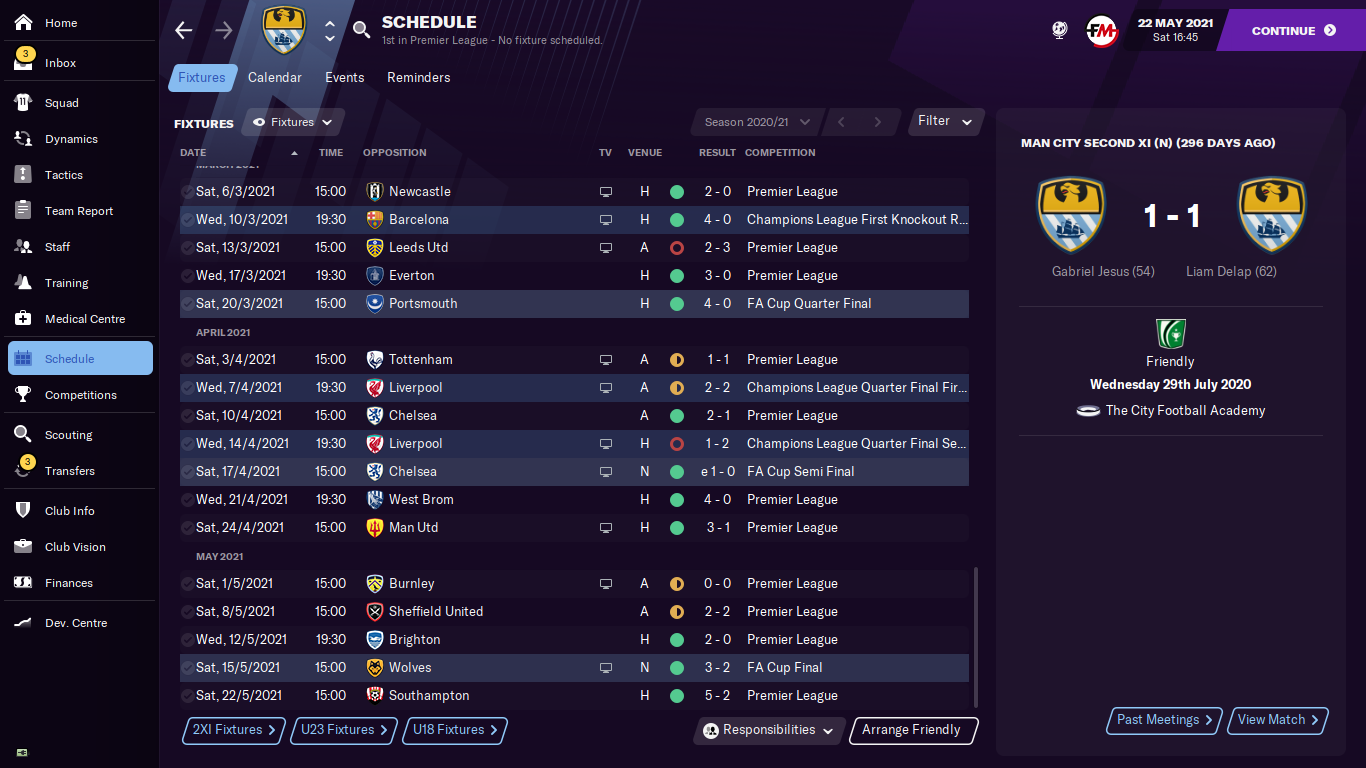 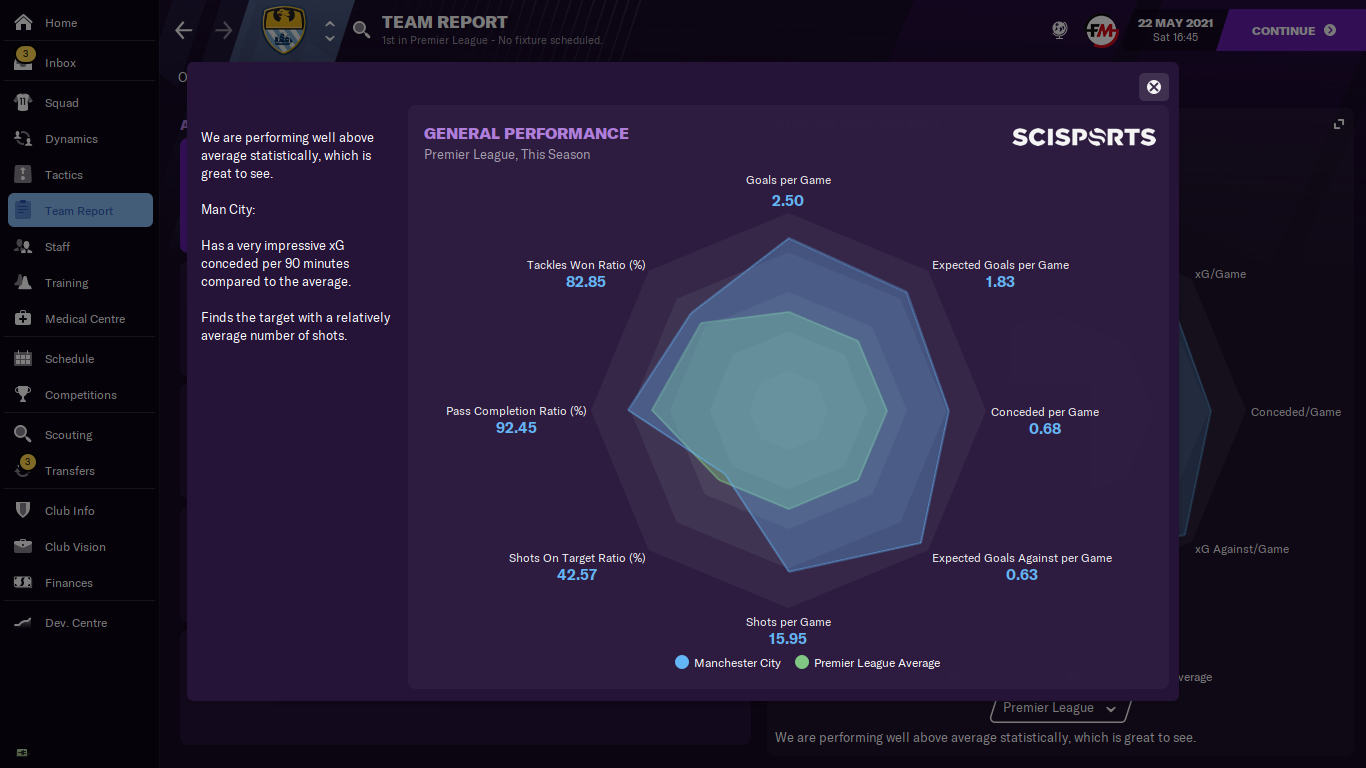 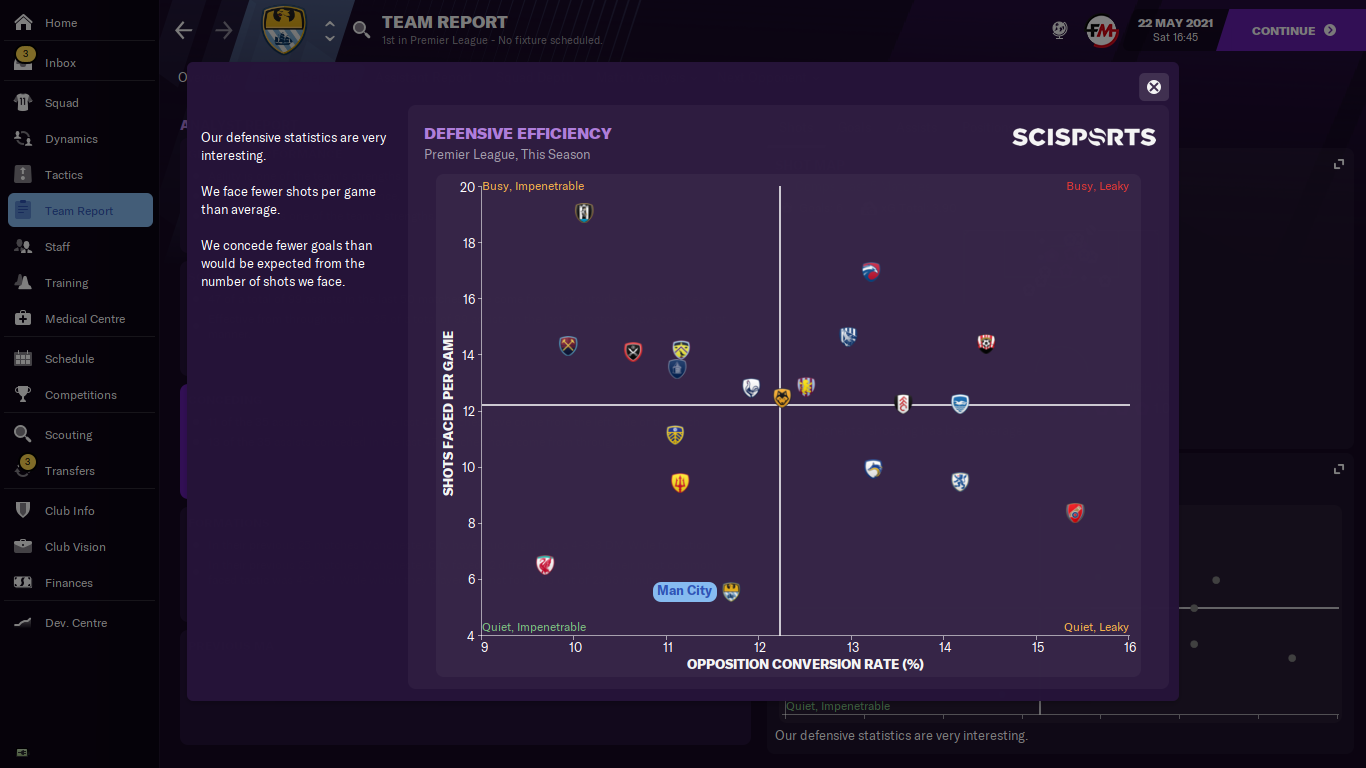 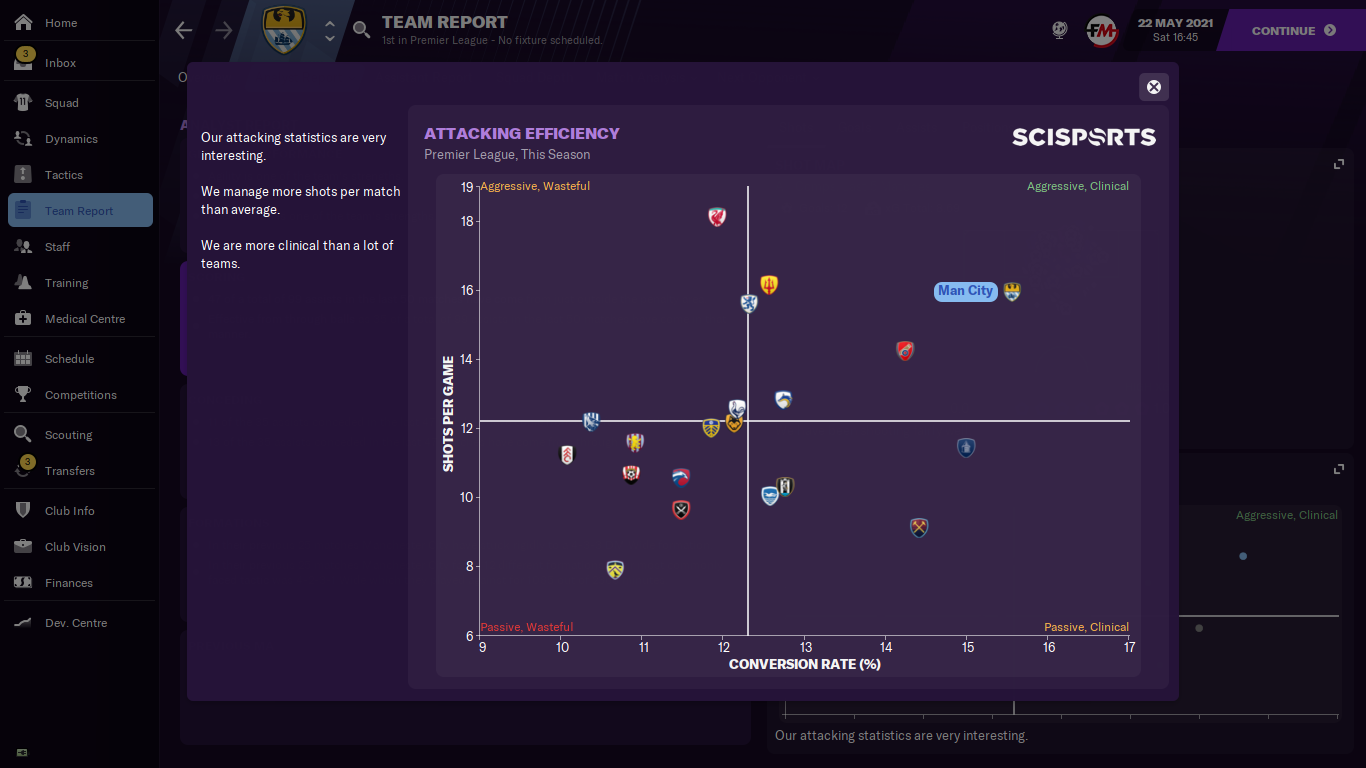 I did adjust things like my line of engagement against smaller teams, during games I would also make slight adjustments based on the state of the game such as increasing or decreasing the tempo etc.