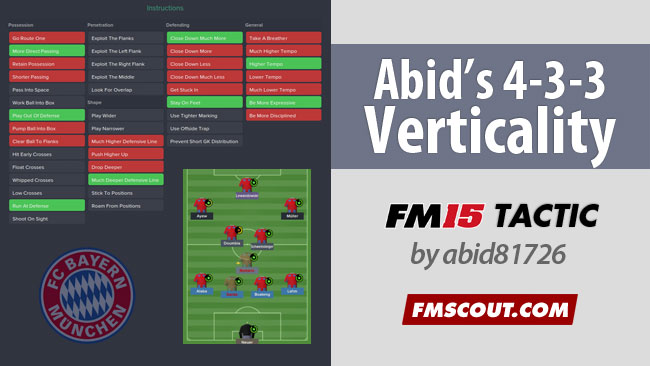 This is my first tactic that I am submitting to this site.

I'd like to give credit to strikerless.wordpress.com which I've used as reference to define player roles and duties.


Like the title suggests this tactic is based on 'Verticality. Now, what does that exactly mean??? It means to get the ball forward as quickly as possible with the help of precise, crisp passing and fast movements. The most important players in this tactic will be your inside forwards who will be providing bags of goals and assists if utilized properly. Consistent performances from your False Nine and CM (Attack) will also be key to your success. The Roaming Playmaker is probably the silent hero over here.

Anyway lets get into further details about Verticality. In FM terms it is very much similar with the team instruction 'More Direct Passing'. It is the basic philosophy of this concept. Some may argue that keeping the ball as much as possible is a more efficient way of winning matches but sometimes only ball possession is not enough. You need to have that killer instinct in your team to finish off the game in one swift, sublime move. As the game progresses you will eventually have more of the ball against weaker oppositions but most of the time you have to settle for a possession of around 50% or less. But this does not stop you from scoring goals and winning games.Let's have a look at some of the results below- 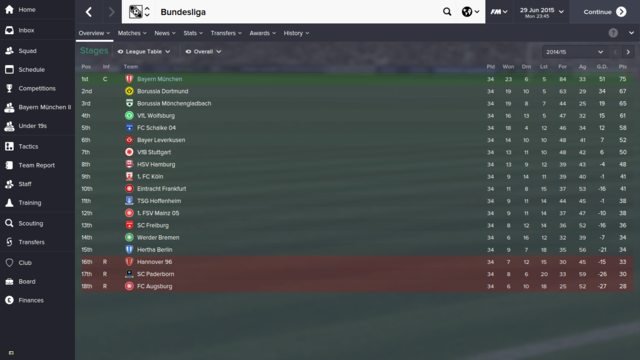 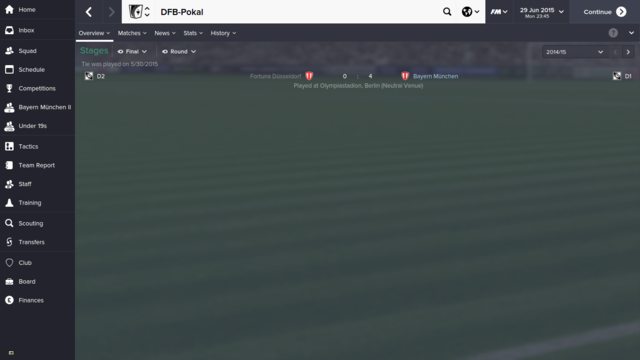 As you can see we finished with an impressive lead of 8 points over Dortmund and also a very good goal difference. Apart from this I also won the DFB-Pokal though it was a 2nd division team. Now to the most important players of this tactic and the actual tactical style and shape- 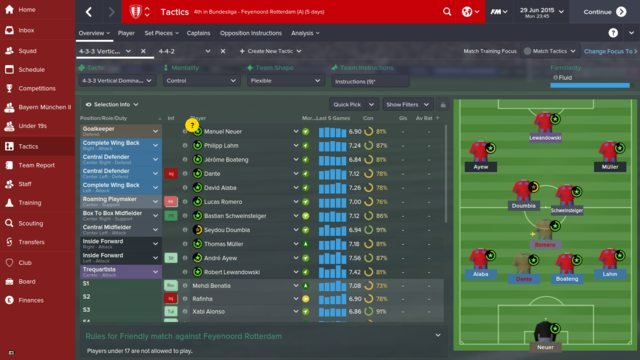 Well this screenshot is actually in my 2nd season that I have not started yet but I have not made any changes to the roles and shape of the team. As I mentioned above the most important players would be the three front men particularly the Inside Forwards who would look to score themselves as well as provide bags of assists for the False Nine. Apart from these two the CM (Attack) and RPM (Support) are also important. Gotze got the most assists in the league after I retrained him as a CM (Attack) and Romero was brilliant in the RPM after I signed him in January. Like it is mentioned by previous users he is a must buy for any team looking to play with an RPM (Support) or BBM (Support). 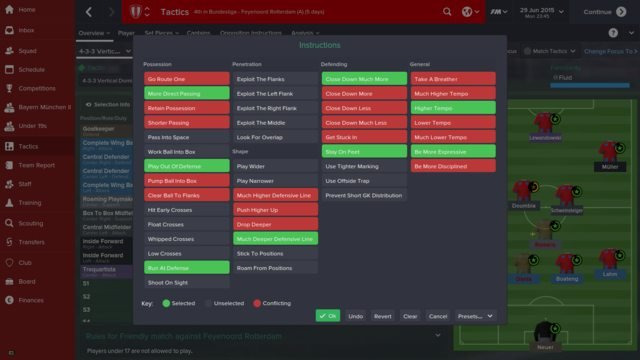 This is the team instructions for the tactic. As I said earlier, Verticality is all about getting the ball upfield as quick as possible hence the more direct style of passing. I also emplyed 'Play Out of Defense' to create a blend of passing and direct football. This makes the players pass the ball a lot quicker up the pitch with the 'Higher Tempo' and 'Be More Expressive'.Another instruction is to 'Run at Defense' to create confusion among the defenders regarding whether to look for a shot or a cross. At times I also used 'Shoot on Sight' agaisnt weaker teams looking for rebounds. I used 'Much Deeper Defensive Line' to create a solid defense and also employed 'Close Down Much More' (previously known as 'Hassle Opponents') and 'Stay on Feet' which has probably contributed to my good disciplinary record over the season.

Now we can move on to the player performance under this tactic. Two of the most successful and important players were Lewandowski (False Nine- Support)and Muller (AMR-Inside Forward-Attack).Both of them were joint top scorers in the league with Lewandowski bagging the top scorer award because of playing fewer games. Overall they scored 31 goals and 27 goals respectively. Muller also had 17 Assists to his name which helped him claim the German Player of the Year award. Apart from these two Gotze and Romero were also an integral part of the team. 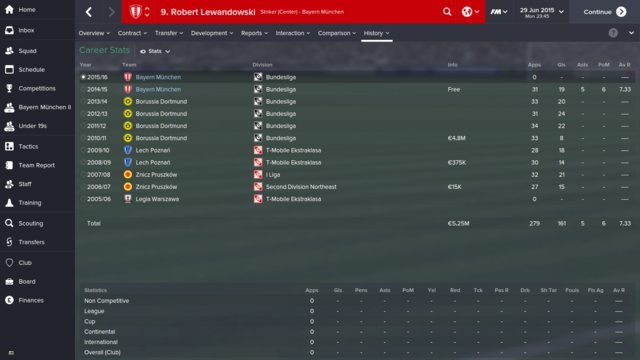 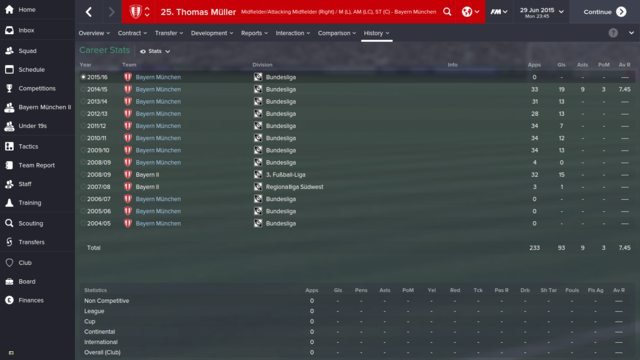 Finally one thing you all may notice is the absence of both Ribery and Robben. Well Ribery was in top form until January and even got nominated for the 'Ballon D'Or and World Player of the Year awards but eventually came 2nd to Messi on both occassions. Surprisingly his performances started declining dramatically after this and it was so awful that I had to drop him and get Ayew which actually turned out to be a tactical masterstroke. I had signed him for around 10M Euros in the summer but could not give him much playing time and ultimately he came to me asking for more time on the pitch and promised to prove himself if given chance. I gave it to him because of Ribery's poor form and he delivered the goods, finishing off with 12 goals in 30 games and also some assists. Robben's case was also similar but it was more difficult to keep him out because of his natural runs cutting inside from the right. But his form was not great either and Muller was banging them in on a regular basis when given the chance. Both Robben and Ribery were also ravaged by injuries which made my decision easier.

I would like to finish off with the transfers I made
In: Andre Ayew, Seydou Doumbia, Lucas Romero
Out: None

I am about to start my 2nd season and this time around I am looking to employ a side tactic beside this one. I will give an update on it as soon as I test it out and get some good results. Cheers and enjoy playing FM 15