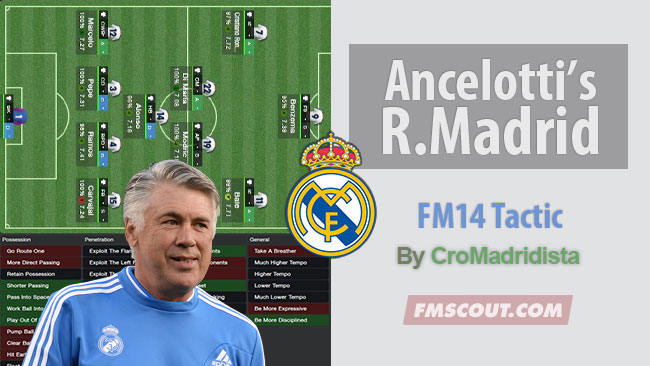 Carlo Ancelotti prefers to use 4-3-3 formation, but on a pitch it isn't just like that. So I have chosen 4-5-1 aka 4-1-2-2-1, quite possibly one of the most famous formation in modern football.

I chose this formation because it gives me all what Carlo want, defensive midfielder like Alonso, two wingers that cuts inside (but can use them as he used them in defense, where they returned back). In addition, I can easily incorporate two central midfielders, in this case Modric and Di Maria / Isco. I'll start with the mentality that in most games is Control in the beginning, I change during the game depending on the results. I was hesitant about Standard and Control, but I still think that in this case the second choice is better; dose of caution, but also plenty of attacking football.

And when selecting the fluidity I was in doubt, put the Balanced or Fluid, but also here the choice fell to number two. I expected that the players participate in the game in all aspects, so will the offensive-oriented players contribute defensively.

Player instructions
When we set special instructions for each player, then we will start from the goalkeeper. In this case most similar option is Sweeper keeper to Defend like Diego Lopez was last season; without unnecessary outbreak and stand at about 10-11 meters from the goal. Ancelotti preferred that because of high defense line, and because Ramos and Pepe often played too high and, in this case, the goalkeeper was the last player.

Ancelotti perfected roles for fullbacks only in second half of season, putting Marcelo to go more forward while Carvajal remained a little behind, or if it is left Coentrao, Carvajal to gain more freedom. So I decided to put Complete wing back on left side, while the right was full back - Support, precisely for this reason - balance. In heart of defence are two different types of defenders. In this case, Ramos was the one who was most moved forward with the ball (Ball Playing Defender - Defend) and Pepe or Varane were slightly withdrawn behind (Central Defender - Cover) high defense line.

Defensive midfielder, Xabi Alonso had a special role. He was playmaker and anchor man, played defensively a lot, but it's also been one of those who start attacks - conductor. In the world of FM that role wasn't available until FM14 - Half back. When Ramos came highly with the ball (thus the whole line of defense), he withdrew and was the fifth defender and even a little behind and to allow extra option, and if the team without the ball, plays standard defensive mid who got only one job - to stop opponent.

Duo in midfield are Luka Modric and Angel di Maria. A slightly different role was that of Argentinian in midfield. Although he is a winger by itself, he has shown how useful can be in the central mid role. His role in FM we can describe as a Central Midfielder - Attack with that is often passed through on the left (when Ronaldo cuts inside and leave space on the left side), so we could see that against Barca (two assists from the left flank). Modric is a classic playmaker (Advanced Playmaker - Support), and against stronger teams Ancelotti may assign him a more defensive role alongside Alonso (Deep-lying playmaker - Support).

There is no need to describe role for Ronaldo and Bale. Simply, they are Inside forwards - attack and there's nothing to say except that they will be the ones who will break the defense line with dribbling, shots... Actually, they are in FM exactly what are they in real-life.

Benzema's role this season has brought many good things in the game of Real Madrid. The whole season he played "false nine" (F9) which allowed Ronaldo and Bale to cut inside. There's nothing more to say except that he will come for the ball deep, and of course he will assist and score.

Opposition instructions
In order to better close the center and ball flow through that part, I tried to close all offensive players. I often closed wingers tightly, but should pay attention to the opponent's fullbacks that can cause problems if they play offensively, but can also help if you use your counter-attacks. I recommend you to read some tutorial about OI so you can be prepared for this.

Other notes and tips

I used a situation from the start of the match. Our wingers aren't required to do much in defence, so our two central midfielders try to close down opponents fullbacks as best as they can (in this case Modric), and then winger come little deeper to hold mid's back. You can also see that we are very thick in the middle so the opponent don't have to much space in that coridor (opponent's attacker is alone between our two central defenders.) On picture above you can see real role of Gil Romero (otherwise there is Alonso). He is in half-back role here. We are trying to get rid from the pressing and now Denswil gets free space, he of course takes it and pass ball to Modric who plays one-two with Isco and counter-attack is ready. In this situation half-back is our other option to play simple without giving ball to the opponents. 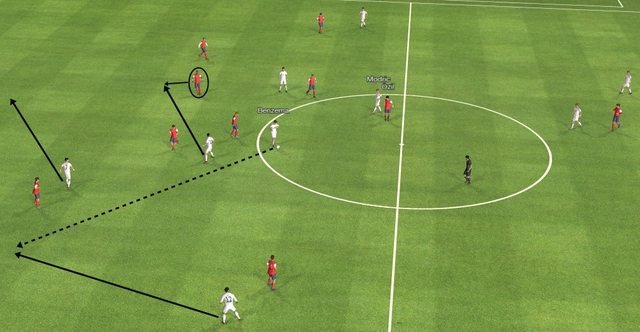 In attack biggest role plays Benzema (F9). In many cases he is key player which can be seen here. He comes deep to get ball, then Ronaldo becomes an attacker while Isco try to distract opponents to another side, and free space is now open to Marcelo (who is Complete wing back). Then full back is moving forward and passing the ball to Ronaldo who is in mat position.

Again we see Benzema in action. Although in this attack he is passive (didn't touch the ball), he dragged two defenders high, while Ronaldo and Bale ran into space. Isco has decided to pass to Ronaldo, but the opposition full back was faster and intercept the ball. In addition, we can see Marcelo run and he could be assisted by Isco and would, most likely, Ronaldo and Bale had a goal opportunity.

Benzema, Benzema, Benzema. I know, always Benzema, but he is key in this kind of tactic (to be precise, one of key players). We are out from opposition pressing, Modric plays ball to Benzema who pass ball from first touch to Ronaldo and he assist to Bale who scores.