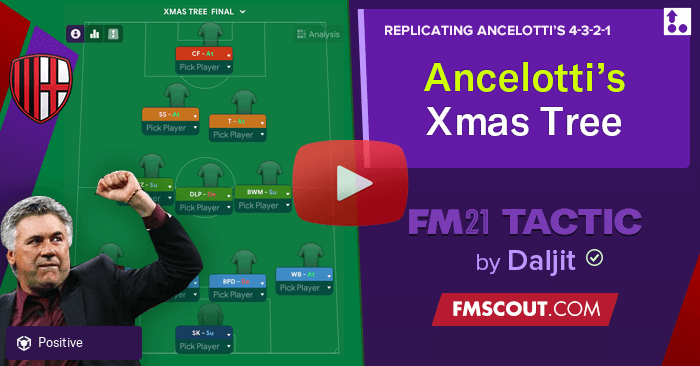 “And so this is Xmas,
Have a happy new year,
Let’s hope its a good one,
Without any tears.”


Each year, I get asked if its possible to replicate the Xmas tree on Football Manager, we had one year where narrow was overpowered, back then anything narrow like 4132 or a 4231 narrow worked wonders. However, in the last couple of years. Narrow systems have struggled to defend the flanks.

This year there’s been a kind reworking of the match engine, the idea here is programming splices into the match engine should make decisions better in the final third. While the early stages of the beta looked good, defending was still fairly poor. SI have now released a patch that should see us through for some time. I’ve given it a fair go and have come up with this year's Xmas Tree formation.

For a more complete explanation please check out my video on the tactic.

Mention the Xmas tree formation to most football manager fans and the first name that pops to mind is Carlo Ancelotti. The magic of Kaka, Pirlo, Gattuso, Inzaghi playing in one of the most difficult formations has yet to be repeated in such a fashion. And there is good reason for that, England tried and failed because they just didn’t have the players for it.

So can we replicate the system? To be honest, I will say no. The role Clarence Seedorf played is almost impossible to replicate, we can come close, but there will always be something missing. So we will adapt and try and get the direct fluid attacking they were known for. To achieve that this is the formation I will be using. 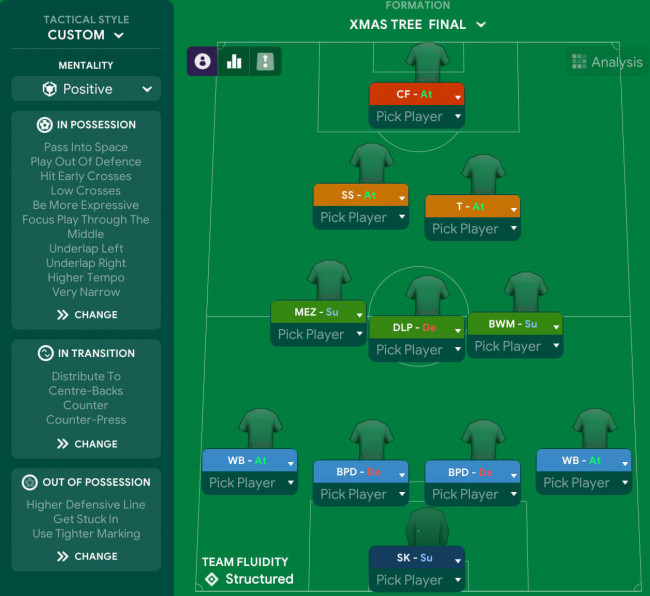 I have a few variations of the Xmas tree, one employs a Complete Forward (S) and an Engache. That has a focus left passing instruction. This one is different, it features a front 3 attacking trio who have all been chosen for their player instruction “move into channels”.

The Mezzala is expected to support the shadow striker and the underlapping wingback. The BWM is meant to secure the right side of the flank where the Trequartista is operating, giving us a bit more security when the wingback goes forward. Between them sits the deep lying playmaker who is expected to be the metronome of the system dictating play, moving the ball around and sometimes exploit the underlapping wingback.

Since we are playing on narrow width I only expect the wingback’s width to be used in the final third. Hit early crosses is an effective instruction against most defensive systems since crosses will be delivered before defensive teams get themselves into their positions.

Underlap instructions are being used because I want to take every chance to use the inside areas of the pitch for crosses, this is further strengthened by narrow width and the focus through the middle instruction.

We have closing down more on a few players across the pitch. The only players not doing that are the sweeper keeper, the deep lying playmaker, trequartista and the ball winning midfielder.

This is a difficult system for a lot of sides to play, so if you can find the right find of players the transitions can be fun. In order to play this system well, you will need a team that possesses great stamina, teamwork, work rate. You 3 midfielders will all need to have bravery, positioning, tackling, composure, first touch, passing, decisions and agility.

You wingbacks need fantastic acceleration and stamina. They will also need good off the ball and positioning. The video I have uploaded includes recommended attributes for the roles in the system. Once again this is not meant to be a definitive replication, it’s just a fun little experiment. What I loved about this system was the attacking input from the Shadow Striker and the Trequartista. One would think they would avoid closing down the opposition, but they did that job sometimes.

The tactic also comes with set piece instructions. Please note that the corner routines have been specifically set up for rapid counter attacks. You will also note that I am expecting the keeper to claim the ball in the air. If you feel that you need more help in the box, then a player to near post centre and far post centre.

The tactic plays with aggressive wingbacks for on the underlap, for some sides this may be too aggressive, remove the underlaps if you want to have less risk. I actually went for these because it was the style I was after, a more aggressive system. Finally, please be sure to check that your players are the sort that can handle hard tackling. They good technique, tackling, stamina and work rate. Above all they should not have a high dirtiness rating.