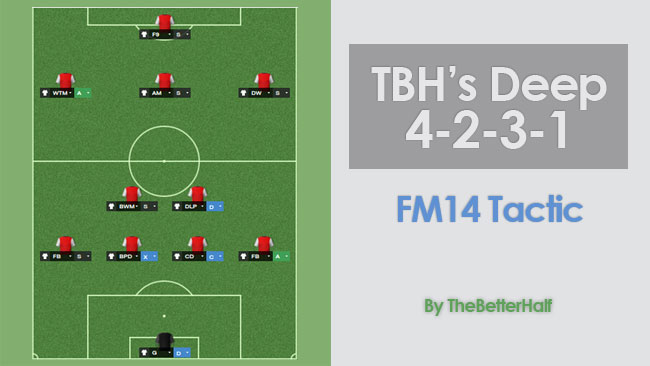 In this tactic we play on the break. Whilst trying to keep possession and play compact, denying space between our 3 blocks, we still try more risky passes and utilize more width when attacking.

The Defence
Looking at the defence, it’s pretty straight forward and the only thing I would recommend tweaking is the stopper/cover roles. When up against formations using a single FC, it’s a great choice but as soon as the opponents play with 2 FC or even worse, with an AMC behind them, it’s better to use either both players on Cover or both on Stopper
We use a Ballplaying DC, one Central Defender, one Fullback on support and one the right flank, a much more adventures and attacking Fullback. Like in the screen beneath, he provides width both with and without the ball and burst forward.

The Centre Midfield
Here, we sit with one Deep Playmaker on defend duty. He is setup to play a more direct game and to close down further up in the pitch ON the left side, we have a Ballwinner on support that gets forward more often and keep a shorter passing game can connect better with the players around him, actually letting the Playmaker hit those t-balls. This way, he can concentrate on getting forward and provide movement instead of getting isolated from the match after having played a more direct ball from deep.

The Front 4
Here, we sit with an AMC on support that have been given the orders to roam and find free space. Within this, he is told to act like a mobile link-man by reducing his risky passes, letting him hold up the ball, move with it and keep a shorter passing game, all this to able his teammates to get into good positions.
The FC is a False nine and he is also told to roam and keep a shorter passing game,. He often links yup with the AMC and drags the DC’s out of position before getting back into the area.
Out on the right flank, we have a defensive winger that holds his ground. Now, don’t be fooled by the labeled Defensive Winger”. It basically means that he puts in more effort for the team. This player should have great movement and crossing.
On the left flank, we use a Wide Target Man. He should be a mobile and strong( agility is important) player. He cuts inside and roams from this position when seeing fit.

1. Put the downloaded file into this folder: Documents > Sports Interactive > Football Manager 2014 > tactics
(If there is no 'tactics' folder, create one).
2. Start your game and go to your team’s tactics screen.
3. Click on the little arrow located to the right of your starting tactic name, move your mouse cursor over “archived tactics” and select the tactic from the menu.