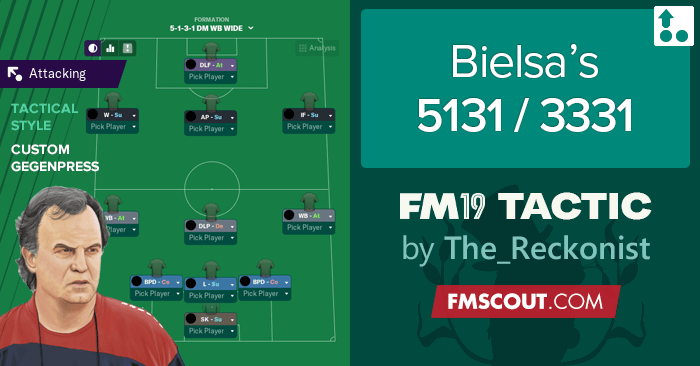 The development of the system is supported by my wonderful supporters on Patreon. Your support means the world to me. If you want early access to development of Tactics plus more benefits, follow the links at the end of this page!

My role was to create a system matching Bielsa's which works in FM19 because importing the FM18 version was not viable due to the huge match engine changes. I spent roughly 100 hours in total testing in various teams and leagues to get this file ready.

You can see why the Bielsa System is seen as the ‘Holy Grail’ of Football Manager Tactical Systems.

So here is what we came up with that works best in Football Manager 2019. What to expect from the Bielsa FM19 tactic:

To accurately portrait the relentless, aggressive direct nature of the system as a whole I felt that adopting a Gegenpress preset in an attacking manor was the way to go and it turns out that this was a good idea! (I do occasionally have them!)

We tried several combinations. In the end the best way to stick to the Bielsa code and be effective in Football Manager 2019 this way. Some of these things are counter-intuitive but, isn't Marcelo Bielsa?

Play Out of Defence. Ball retention is the priority. Almost to a detriment.
Work Ball into the Box. With plenty of possession this makes sense.
Pass into Space. To create urgency and disrupt defenses.
Extremely High Tempo. Fully embracing a gegenpress focus on intensity and player fitness.
Exploit Left and Right Flanks. Stretching the play as much as possible making space for A passes through the middle and B Exciting attacking wing play.
Overlap Right/Underlap left. Depending on if you have a standard Wing back or Inverted Wingback. Adjust depending on your team.
Extremely Wide. Increasing the space teams have to cover. Lending itself to the gegenpress nature again.

Keeper to pass short and quickly to one of the three Defenders or if that avenue isnt on, a chip to the flanks.
Counter. Punishing turnovers as fast as possible.
Counter Press. This is having your cake and eating it. Harassment. Hunt the opponents down in packs to force a poor pass under pressure or an error.

Much Higher Defensive Line and Offside Trap. A high line is required. We go all in and rely on the recover powers or your covering defenders or the strengths of your Goalkeeper Rushing out and in 1v1 situations. This is the primary way the AI will get goals. It is a weakness but a necessary one for the chaos a super high line creates in the opposition consistently.
Extremely Urgent Pressing and Much Higher Line of Engagement. Harassment is very important. Never letting the opponents take a breath.
Prevent Short Goalkeeper Distribution. With 4 players in and around the opponents defence this is a no brainer. Feeds into the Harassment policy and forcing a Keeper into a long kick when you have 3 Center Backs is a great feeling.

Free Kicks and Corners. are all depended on the players you have so I cannot tell you what is best. However, I will point out that you have 3 Centre Backs on the pitch so perhaps take advantage of that.
Throw ins. I would set up as Quick to keep pressure on the opponents. However, I had some success with a Long Throw into the box with all 3 Centre Backs up in the box. Again, this is up to your players.

Goalkeeper/Sweeper Keeper (Use Either depending on player)


Prioritise Distribution attributes, Rushing Out, One on Ones and Aerial Reach as 90% of your goals will be conceded by a through ball. Obviously try and negate the inevitable exploits the AI with use.


Physical Stats get priority in particular Acceleration, Pace, Anticipation and Positioning.
Chosen to help the issue with opponent crosses leading to goals. These guys stay slightly deeper than default and provide cover for both the WB and each other with any through balls so need to be very mobile.


The conduit in which the defense can play keep ball with. Extra technical stats needed over most defenders but especially strong mental attributes needed. Long Ball and Dictates Tempo PPM will be useful. First Touch, Vision, Composure and Passing along with the best traditional defending stats possible.


Due to the system employed, this man will be outnumbered a very large amount of the time. You will need to Prioritise Defensive attributes over the ball playing skills although in games where you do not expect much of an attacking threat from an opponent you can go forgo the Defensive side and pick your best passer. I had great success with both a DLP, DM and a Regista here. Switch as you like. Positioning, Composure, Concentration Tackling and Decisions should be prioritised.


Oh I love these guys. Providing defensive cover and attacking threat by a combination of High Physical Stats and great technicals. Do not be afraid to play people here who are not natural in this role and retain Defensive Midfielders here as they will share stats. I would really push you to prioritise spending getting the very best Wing Backs that are interested as again, your weakness will be defending crosses. Extra points for having opposite foot in each side although that will be difficult when the game starts. Expect both of these players to be near the top of Distance covered by players. They need to be Supremely fit. Natural Fitness, Stamina, Work Rate, Acceleration, Pace, Teamwork, Dribbling, Passing, Long Shots should be prioritised but it is very difficult to find players with all these stats. Get the physicals down first.


These guys have one job. Run with or without the ball. Getting to the Byline and crossing or providing defensive cover is there whole game. Acceleration, Pace, Dribbling, Crossing, Stamina, Workrate and Flair. No need to burden these players with concepts of Passing. They should just be pure Wingers.


One exciting part of this tactic was developing a system with an Enganche. A role I don't use often and the signature of Bielsa’s systems. This is basically and Advanced Playmaker that does not move from his position. So do not expect any defensive responsibilities (Adding the the outnumbering of the DM) The ‘Hook’ stays in his position for the most part and sprays passes to the people around him and occasionally popping up in the penalty area for crosses. Passing, Vision, Technique, Flair, First Touch, Composure and Off The Ball are the highest priorities. Physical stats are really not even a consideration meaning you can get really lazy or aging ‘Luxury’ player here.


The key here is the support role. To create lines in the defence I prefer to have one of the Striker or AMC in a Support Duty the other with an Attack Duty. You can swap them at your leisure but you really should keep that component. His job is to assist the creation of chances and finish chances equally. I would argue that a Target Man is the purest to Bielsa’s original style but I had success using all depending on the strength of the player I had. Off The Ball, Strength, Work Rate, Finishing, Heading, Composure and Balance being of real importance.

I dont give OI’s on my premade tactics as the systems you play against change every week. It seems like madness to me to blanket OI’s but appears to be the norm. I will give some tips here. Closedown Creative Players. Leave poor players to make there own mistakes and tackle people with Low Bravery, hard.