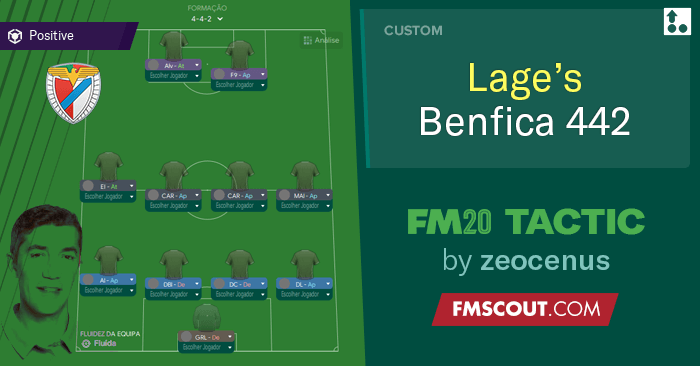 Benfica this year is pretty poor to watch but last season was pure joy, they even won 10-0 against Nacional da Madeira and there was 2 keys in that team, a team built around João Félix and a balance midfield with fast paced plays in the wings. 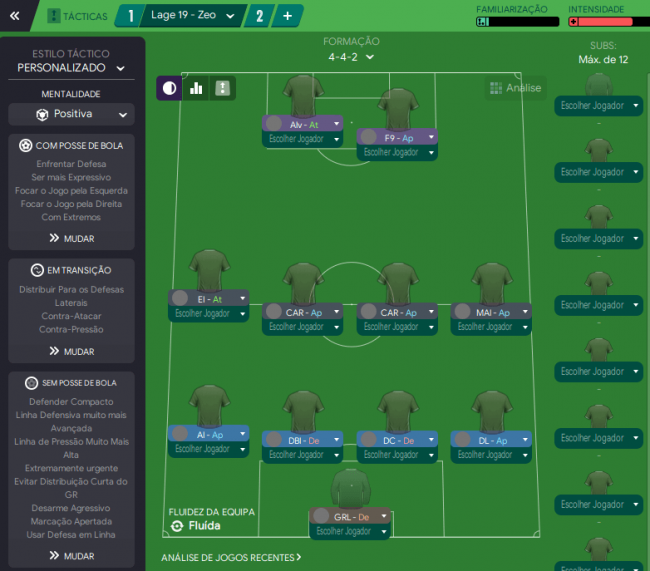 This is a flat 442 with a lot of chances created through the flanks, despite the team instructions I was able to make the team attack a lot, shoot a lot, score a lot and having a lot of possession:

- In the Center of your Defense you will always have a BPD (ball playing defender) and a CB (center back), which doesn't mean that only one of them is more comfortable on the ball, it just prevents losing the ball more often and will give good stability to your defense. (Use them in the side they are more comfortable)

- On the Left Side we have a LW (left wingback) and an IW (inverted winger) that will create lots of space, using the LW to explore the space on the left side as well as crossing a lot, and the IW will try to create chances cutting inside and playing behind the target man as well as he will be the player who will often tries counter attacks due to he's pace.

- On the Right Side we have a RB (right fullback) and a RM (wide playmaker) that will be more balanced as they will play more one-two's, cross a lot both of them, the RB will give more balance to the right side and you can tweak him to a WingBack on Support (to not mess up the fluidity) and the RM will be main creator of your team as he will think the whole game and do lots of assists.

- The midfielders are the one who will compensate the team when we're on attack as they will cover THE WHOLE PITCH and still create a few chances, score some long range goals (even if they only have 11 longs shots trust me) and they are the ones who give the balance to the team. You can always use your players traits to mix up the game like some one with more technical abilities to retain possession or someone more defensive to defend more or someone who likes to join the attack or shoots long, don't change the roles here, just pick your player based on their player traits.

- The two up top will have a 9 (target man) and don't let the role fool you, he will not be a Giroud, he will act more like a Lewandowski cause he will try to score a lot, he will explore clinical spaces inside the area to finish, will try to head most of your crosses and will do simple passes to keep possession and leave the creative players do the rest, he will essentially focus on scoring. And we have as well a 10 (false nine) which was where Joao Felix played, he will drop on the pitch try combination with your RM and Mids, he will try to open spaces in the defense, will score and assist as well. This 10 is the key to your attack. Of course you can still win games with free kicks or counter attacks... BUT when he plays well the whole team plays well and you will see.


GK - an all rounded goalkeeper if you don't trust yours I recommend Farinez.

If they are aggressive or brave train Tackle Harder on traits or Marking Tighter if they have good marking. Is important to be good on the air not just for set pieces but to prevent ball over the top as well.

RB - prioritize defensive skills but keep in mind that he cant be weak on the attacking side, if he has 12 crossing passing and off ball he suits, but he need to know how to defend first. Traits: If he's slow Cross Ealier.

Mids - stamina, balance, aggression, pass, tackling, teamwork and positioning, when buying players to this position prioritize mental and physical attributes (as you can search for box to box attributes), and if want to attack more use someone with good mezzala or roaming playmaker attributes, but DON'T CHANGE THE ROLES. Traits: it depends on the opponent use your player traits to pick your players.

RM - passing, vision, crossing, technique and decisions, you can adapt a playmaker to play on the right side, for example I adapted Tiago Dantas. Traits: Try Killer Balls, Long Range Balls, Switch Flanks, Dictates Tempo and Pass To The Feet. If he's slow Cross Earlier.

IW - pace, acceleration, agility, technique (or dribble, one of them at least) and flair. Traits: Run With Ball, Cuts Inside and if he don't have good finishing Round the Keeper.

9 - heading, finishing, first touch, composure, anticipation, decision and off ball (some bonus attributes are jumping, being tall, technique, strength/ball, passing and using both feet). Traits: Places Shots, Plays With Back To Goal and Move Into Channels.


I also did some training schedules to help the team to familiarize with the tactic, and once they are full familiarized you can either keep them, do them yourself or you can check out RDF's videos about training as I think they are very good indeed.

I made a training for when you have 1 game a week, 2 games a week or none. In the Pre Season or Mid Season Break I suggest you make a physical training week or a booting camp which is in scenarios and use focus on cohesion as much as you can to help your players getting along with each other.

For Intensity I use No Intensity till 70%, and if I have European competitions I do: 70-79 Half, 80-89 Half and 90 Double, but if you don't have European competitions you should use 70-79 Half/Normal, 80-89 Normal and 90 Double. On Individual Training use Automatic Intensity on ALL players, train the traits I recommended on (2) and if you want to real go hard on it go check out RDF's development video, it's really good I promise you.

The most important think for you and your team is Momentum and that can only be good if your team is Happy. I have some tips for you, every 1/2 weeks you need to praise your player training if they have 8.00 - 8.95 you use calm, if they have 9.00 - 10.00 you use passionate, if they performance badly like 6.65 or less you criticize them with a Calm or Cautious depending on their influence on the team. If they react badly to your conversation just praise their conduct and it will restore their morale, trust me. 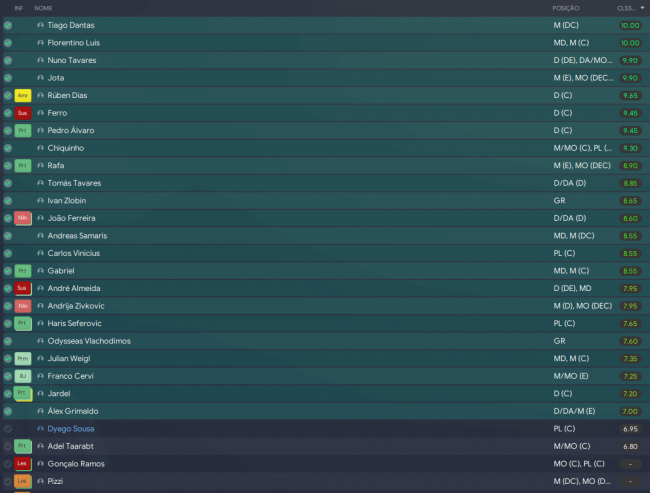 
Now some results of the first season and a print of my UCL winning in 2nd season, oh and also I won 2nd season league title with 5 draws and 0 losses. 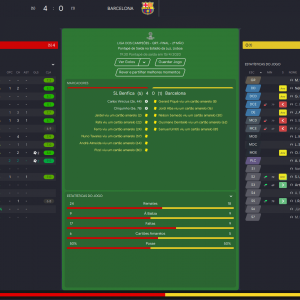 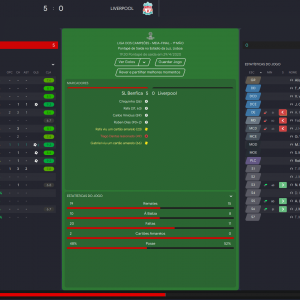 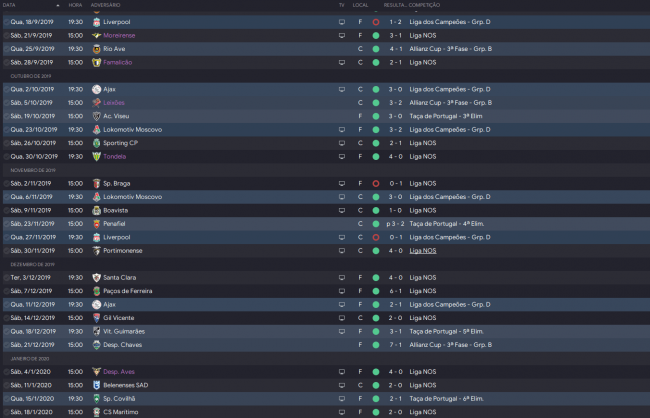 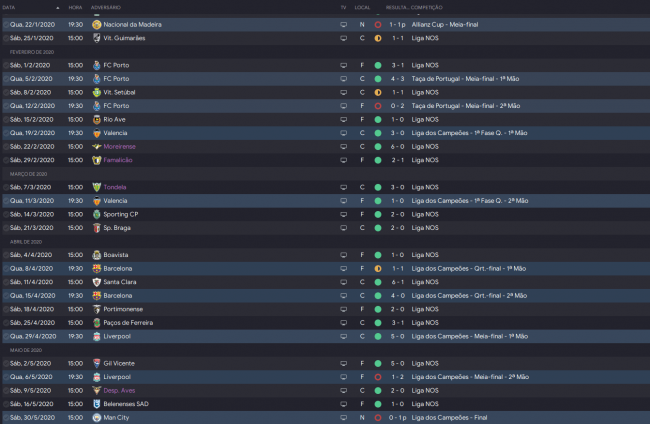 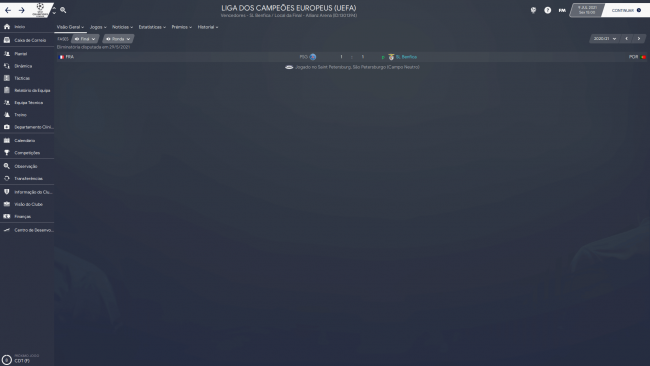 Once more, thank you all so much for the feedback, hope you enjoy I'll see you soon!