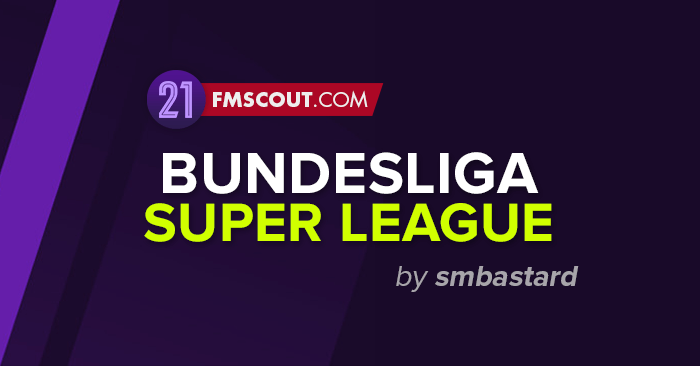 Looking at how the world revolves around English football, I decided to create a database in which leagues with lower visibility gets more attention. And one of the leagues which is sadly underappreciated cos of the high profile nature and marketing budgets of English league and La Liga is Bundesliga. Entertainment everywhere. Drama everywhere. Passion everywhere. But cos of less commercialization they remain behind. A victim of their own ideals.

But RB Leipzig has shown that with proper planning and money you can become a giant in world football very quickly. Sadly such sugar daddy club are rare in Bundesliga. And they abhor the english system of running clubs as well. So no chance of a Sheikh or Russian oligarch taking over Union Berlin in the near future.

So here we are in this fantasy world where in a gesture of class and respect the world football has decided to move to Bundesliga. Now it has become the Bundesliga Super League. And the 2nd division is filled with super star clubs as well. So Bundesliga will earn a lot and hopefully become the epicentre of the footballing world.

And with covid destroying the finances of many a lower level clubs and even French 1st division , EPL has decided to promote all the teams from the championship to the PL. And championship is filled with teams who earned less and needed the money or fame. And where have the PL teams have gone you say?

The big ones are in the Bundesliga. A couple are in French league helping out the french clubs. Many are in spanish league and also in Italy. ALL in all using their viewing figures to help leagues around the world. And also with strange matchups more people will watch than if it were regular matchups. Burnley vs Athletic Bilbao is gonna be a cracker.

So in short just a new way to experience FM. And i have used the Editor for the first time ever. It was overwhelming and 100% i have made mistakes. Many mistakes. But i have got many things right too. So some positive. And i will continue to chop and change and update the file. If you want to enjoy or experience this fantasy world , download the file and fire up your game. And do the following challenges if so inclined......

1) No longer is taking over a big team an easy way to play the game. You have to fight 17 other big teams for the Bundesliga title.

2) 2 Liga is pretty competitive with many big teams.

3) Burnley and Stoke in La Liga.

4) Take your favourite championship club which now is in the PL to the title.

5) Villa and West Ham in the French league.

6) Newcastle in Italy. Bruce chilling with Sarri as we speak...

Also i have changed the media prediction thing for only two leagues ( Bundesliga and PL). And its based on my own estimation and knowledge. So I am sorry if its vey wrong. For these two or other leagues suggest media prediction and i will input it and update the file.

Anyway please give feedback and help me make the world even more in depth and enjoyable. Enjoy!