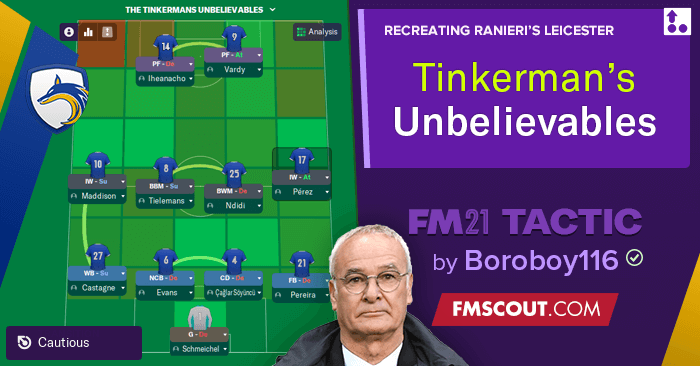 Claudio Ranieri’s appointment as Leicester City’s manager in July 2015 was met with skepticism. He was sacked from his last role as the national manager of Greece with defeat by the Faroe Islands proving to much. He took over a Leicester side that barely survived relegation in the previous season with a great escape seeing them maintain their premier league status, but the experts all predicted Leicester would fall in the following season.

Ranieri was a vastly experienced coach having already managed 14 clubs, including Cagliari, Napoli, Fiorentina, Valencia, Atletico Madrid, Chelsea, Parma, Juventus, Roma, Inter Milan and Monaco. At Leicester, he used this vast experience to build expertly on the foundations laid by the previous manager Nigel Pearson. No doubt Ranieri also benefited from the high-quality recruitment which included Riyad Mahrez and N’Golo Kanté coupled with the outstanding team spirit amongst the players.

Ranieri’s initial target of gaining 40 points to avoid relegation was modest. By October the Club was third in the table. Jamie Vardy broke the Premier League record by scoring in 11 successive games. The team entered the New Year at the top of the table, level on points with Arsenal. Ranieri’s team won the title by 10 points, a massive achievement, and he was unsurprisingly named manager of the season.

During his time as Chelsea boss, Ranieri gained the nickname the tinkerman in reference to him always rotating his players. However, at Leicester, he went almost to the opposite end of the spectrum using the same team every game baring injuries and suspensions. Ranieri used a 4-4-2 allowing a greater presence upfront, It is also easier to maintain spatial compactness in defence. The shape can be referred to as 4-4-1-1 in defence with Okazaki playing deeper than Vardy.

Ranieri was able to refine his tactics to limit Leicesters weaknesses whilst maximising their strengths. He set his side up to take advantage of transitions, Leicester would often sit in a deep block defending from their own penalty area, primarily due to the lack of pace of their centrebacks. Leicester would often look passive allowing opponents to control the pace of the game, which they would react too, FourFourTwo described this style as guerilla warfare with Leicester drawing opponents out before countering with devastating effect.

Ranieri has been hugely influenced by another Italian coach Arrigo Sacchi and you can see his principles in aspects of Ranieri's tactics. such as using a zone oriented man marking system alongside vertical compactness to control the space in the middle of the pitch. Ranieri divides the pitch into three vertical zones, with his team only occupying two of them at any given moment. This kind of control helped them intercept passes across the middle.through, tight man coverage and closing down passing options. 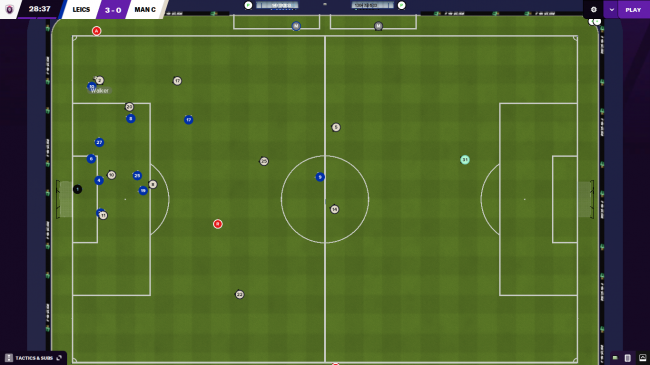 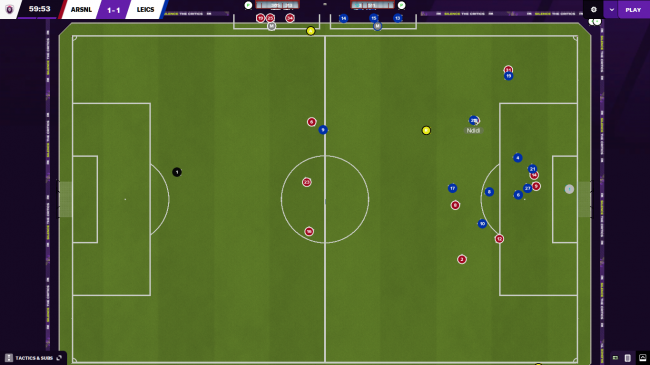 These images show perfectly these principles of Ranieri.

Once the counter attack is triggered it is lethal, Leicester use the pace and clever movement of Vardy to latch onto long balls into the channels. The second striker is deeper but they will form a diagonal line with Vardy who drifts outwide looking to attack the half spaces in what has become his trademark run. 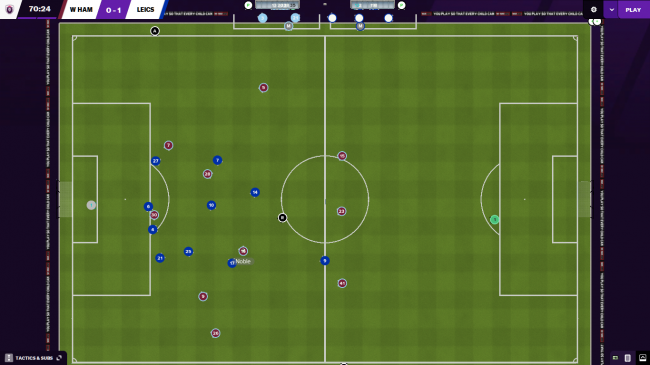 Here you can see the deep block limiting the options for West Ham with Vardy pulling into the right half space in preparation of the counter attack.


As stated above the formation used in all but a few games by Leicester in their run to the title was the 4-4-2. Leicester used the counter attacking style and the mentality used is cautious. However I did adjust this in game from time to time and on game by game basis. For example when playing lower teams like Fulham etc I would shift up to balanced, 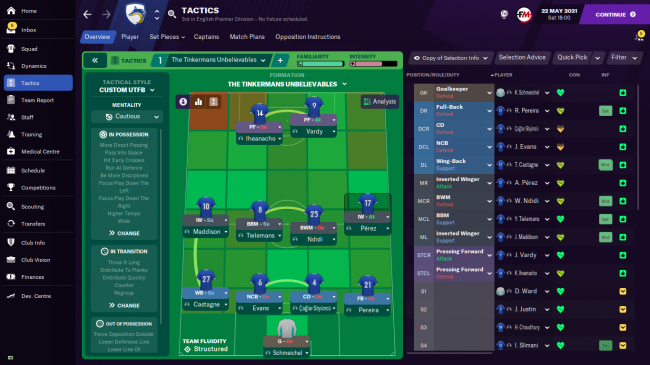 With the ball Leicester were direct looking for quick counter attacks, therefore the team width is wide with the Mahrez role having the freedom to roam from position and sitting more narrow than his counterpart. Passing directness and tempo are higher and more direct again supporting those fast counter attacks. Adding pass into space helps Vardy to run onto the balls over the top into the channels and be more disciplined priortisies the team playing as a collective unit. 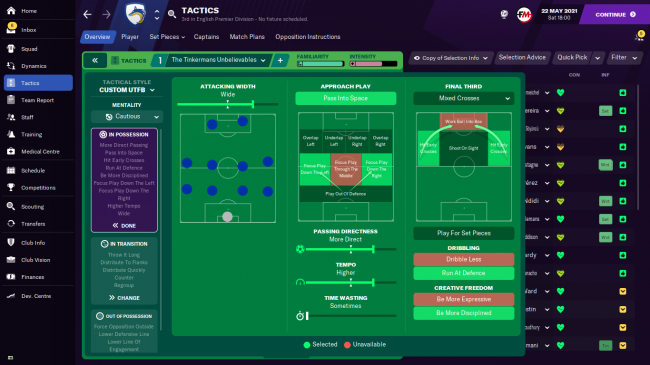 Transitions are so important to the way Leicester played, in fact they were set up in such a way to take full advantage of them especially in the attacking phase. As mentioned above Leicester were almost passive without the ball dropping deep and shuffling from side to side so using regroup is selected, once the ball is won they counter attacked quickly and therefore counter is selected. The keeper will also distribute the ball quick to the flanks to start counters. 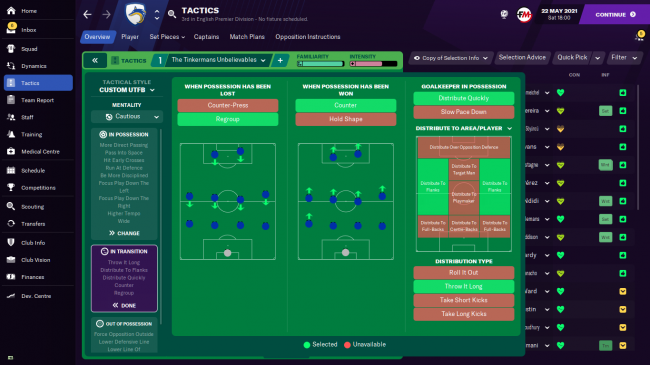 Without the ball to create the deep block a low line of engagement is used along with a low defensive line, this prevents little space in behind and ensures teams play in front of the defence. To help create the zonal man marking system to cut passing lanes whilst also pressing the man means I have gone with the highest pressing intensity I also use the OI's of tighter marking and always press to recreate this principle. Leicester forced teams outside as their centre-backs were comfortable with dealing with crosses and lacked the pace to play in a system with a higher line therefore forcing teams outside is selected. 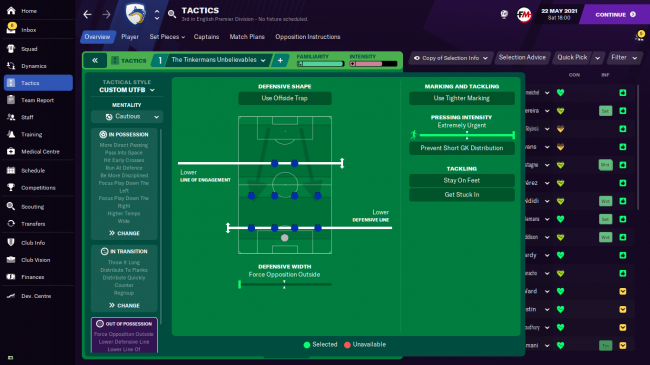 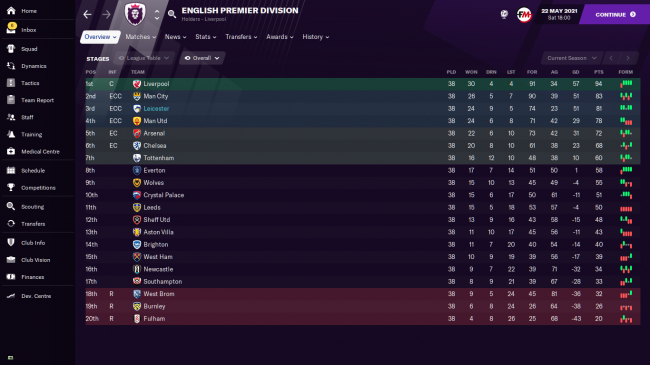 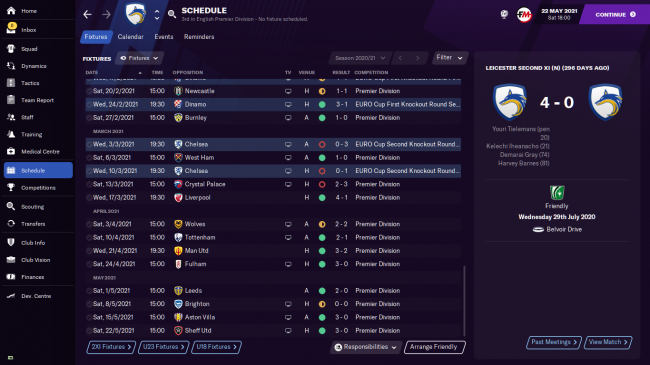 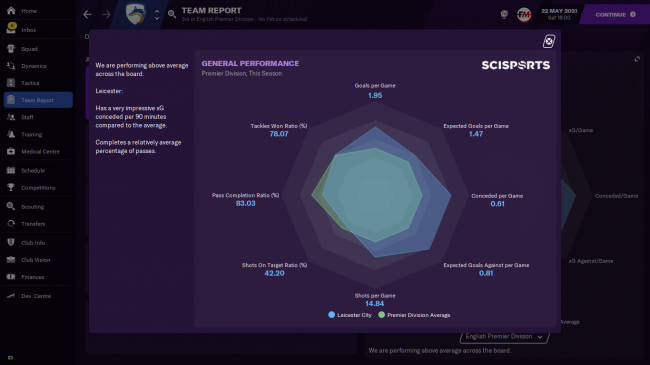 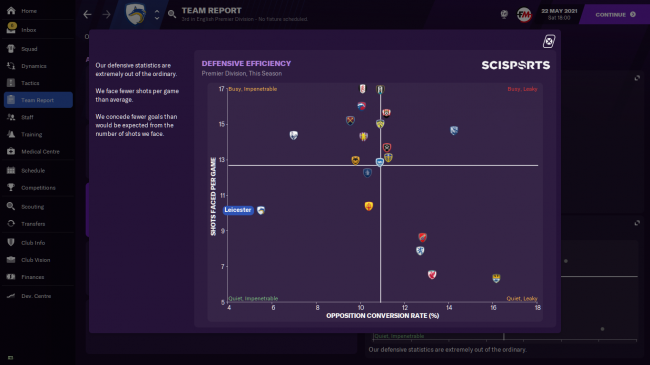 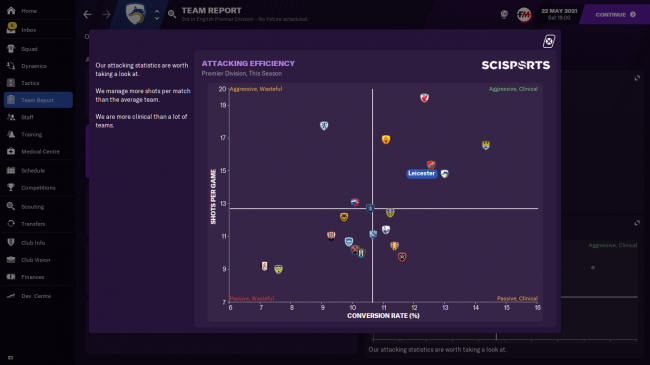