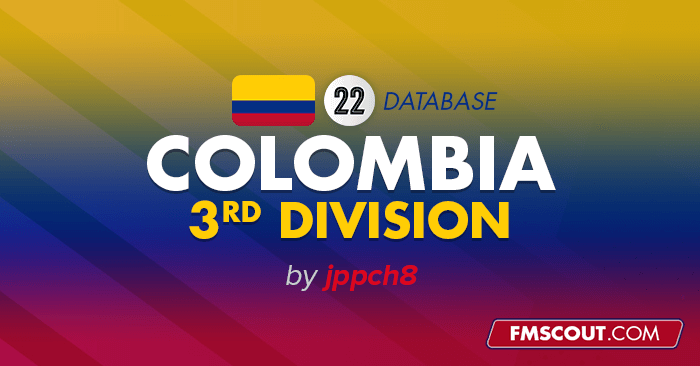 This is a personal project that I started about two weeks ago for private use. However, given the dedication and effort that I have put into it, I have decided that it is worthwhile for the FM community in English and Spanish to try it, since it is for me and for my country Colombia, a dream to be able to have a third professional league in large and intermediate cities.

First, I want to clarify that it is based on a file uploaded by a person, who recreated the real third division (although this is not professional nor is it organized by the sports authorities), and from which I leave his twitter in case you want to go download your file.

Second, to also clarify that the first and second divisions were subtly modified in terms of television rights, participation, etc., but their format remains the same as the real one. Just as Cucuta Deportivo was added to the 2nd division. In the same way, the Colombian cup continues to be maintained in its real format.

Third, remember that the third division is completely fictitious and made at my discretion.

The third division is made up of S:

- 48 teams divided into 3 groups, in geographical order, of which 4 qualify by group to the next round.
- In the second round, 4 groups of 3 teams are formed in geographical order as well, in which 1 per group qualifies.
- In the third round, semifinals and finals are played to determine the champion. The two teams that qualify for the final are promoted to the second division.
-There are historical teams such as Real Sincelejo, Caterpillar, Centauros, Lanceros (Falcao's debut club), Uniautonoma, Estudiantil, Sarmiento Lora, Compensar, Girardot, Popayan, among others, along with universities such as Los Andes, Javeriana, Univalle, Sergio Arboleda, which have served as a seedbed.
-Each team in the 3rd division starts with 500,000 euros of balance to make their investments, and the vast majority of teams without players to create a fictitious dispute between them for free players.
-Adjusted player salaries in the country to better reflect reality.
-Adjusted sponsorships to obtain a higher income in the teams
-Adjusted TV rights and cash prizes to improve income as well.
-Increased the potential of some players
-The historical records have been kept when the real competition existed.
-Other minor personnel changes.
-More than 10 fictional derbies, along with fictional rivalry, mostly between teams from nearby cities and regions.
- Fixed nicknames and names for all teams
-Created a fictitious U20 league for each division.
- Kits and colors for each team
-Other modifications that I don't remember.

Additionally, shields of both sizes were created for all teams and the third division, which can be found in the folder called Colombia within the download file.

If you want to support me on Patreon or ask me anything here I leave the link.