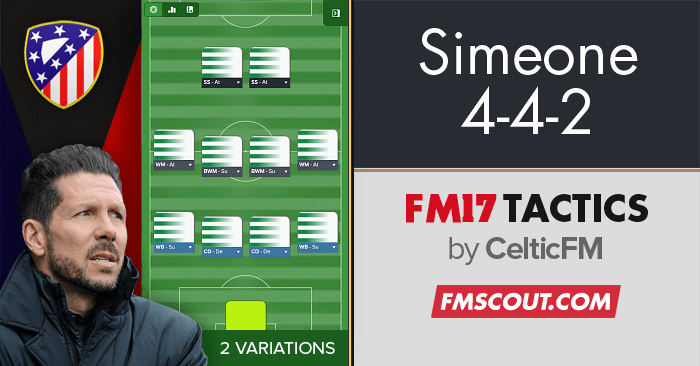 Simeone has established Atletico as a Spanish giant as Real, Barcelona and Atleti challenge for the title every year, one of the most sought managers in Europe here is why Simeone has been so successful in transforming a mid table Atletico Madrid side into one of the most feared teams in Europe not only able to compete in the Champions League and domestically but Reach the final twice and become champions of La Liga.

Under Simeone Atlético Madrid play a unique style of football in comparison to the rest of the modern game, whilst teams like Barcelona prefer a 'Tiki Taka' philosophy dominating most matches with patient passing and keeping a large percentage of the ball or teams like Arsenal playing a vibrant attacking (4)-2-3-1 set up.

Diego Simeone prefers a classic 4-4-2 formation but is much more advanced and effective than the old target man and poacher set up. Simeone engrains cohesion, organisation and discipline into his side in order to try and achieve a result, set up with 2 banks of 4 and 2 front men every player on his team contributes to the defensive and pressing side of the game with a lot of ground to cover attacking and defending as a unit.

Simeone has his men set to press high up the field in an attempt to win the ball early on starting with his forwards and if the ball crosses into his teams territory his defensive line retreats much deeper and his team sit very narrow compressing the space in the centre of the pitch and forcing the opposition out wide where their wingers are pressed aggressively and a counter attack is quickly launched.

This FM17 tactic will attempt to:

Main Attributes for this style of play (DNA):

Goalkeeper: A good shot stopper as he will face a large amount of long shots when playing deep in ur own half ( Jan Oblak )

Wingbacks: Must be able to get up and down the field and contribute to attacking and defensive phases of the game - high stamina work rate and positioning ( Felipe Luis + Juanfran )

Centre backs: Must be able to keep shape in defense and intercept stray passes - Positioning and Marking must be high ( Godin + Gimenez )

DLP/S: Sit deep and keep shape in defense - Must be an all round player with good stamina work rate tackling passing and vision ( Gabi )

CM/S: A box to box midfielder without the free roam PI player will press high up the field hold team shape in defence and have good physical attributes to be able to contribute to fast counter attacking bursts up field - Must have high stamina work rate passing and dribbling (Tiago)

SS/DLF: Both strikers will have to defend deep in their own half and press high up the pitch whilst also linking up in attack with team mates - Must have good work rate dribbling passing vision and off the ball.

**Aggression is also an important attribute but not vital** 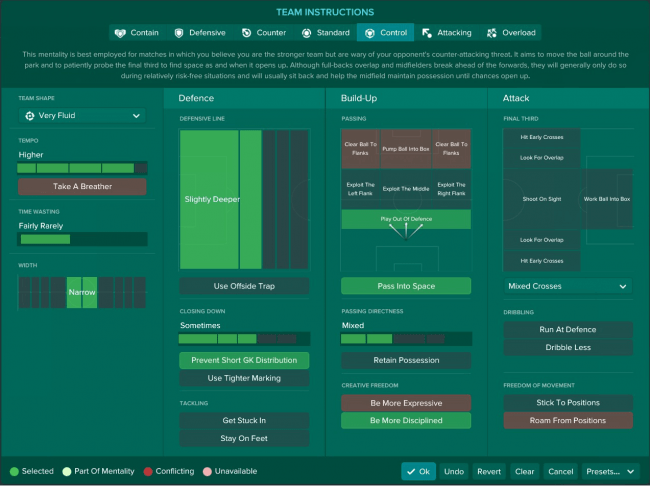 The team instructions are not set and stone and may be changed whatever your preference.

Narrow: Midfield and defence will sit narrow and compress the space the opposition has to work with Slightly Deeper Defensive line: ** Must be adjusted in game depending on opponent** Put to normal or slightly higher if you feel you need to attack.

Be More Disciplined: Must work as a team and follow tactical instructions no flashy passes or wasteful dribbles to disrupt the flow of play

Pass into space: Exploit the space in behind opposition defence

Play out of defence: Discourages long balls from the back and encourages players to either run or work the ball upfield

***Optional*** Look for overlap: To bring wing backs into play more often ( will already be involved in the game due to their attacking roles )

Work ball into box: Only to be used against weaker opposition Run at defence: Use if your team has good dribblers amongst its ranks it can be useful on the counter attack bypassing defenders and taking them out of the game.

*VITAL* Absolutely crucial in emulating Atletico's pressing, set to press every player in defensive positions (High Press) and to stay solid in the centre until the ball is out wide (Wide Press) 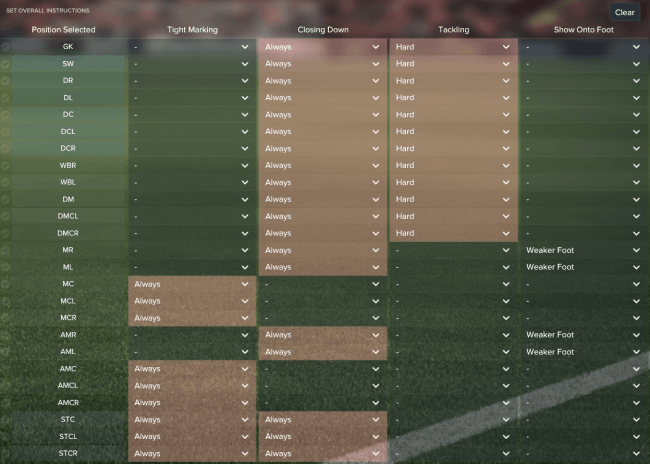 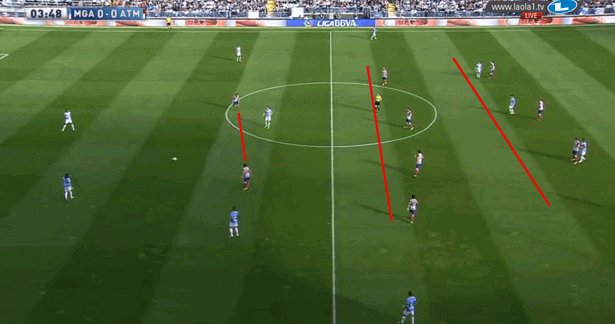 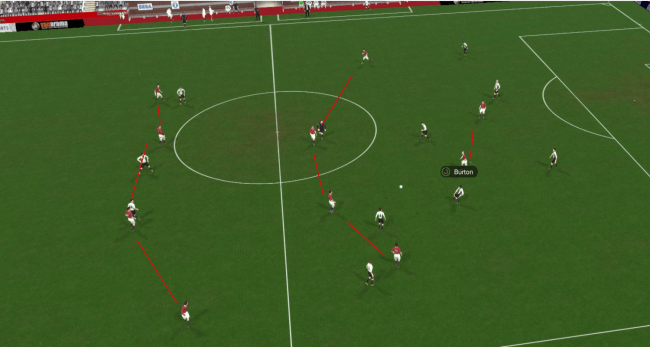 Crucial in providing a solid basis in pressing and being defensively disciplined and hard to break down.

2 narrow banks of four in a solid team shape, forwards helping press the ball encouraging opposition to launch a long ball and give away possession, acts as an iron curtain making it difficult for opposition to break down and hurting opposition on the counter attack, all players must contribute to pressing and stay in shape. 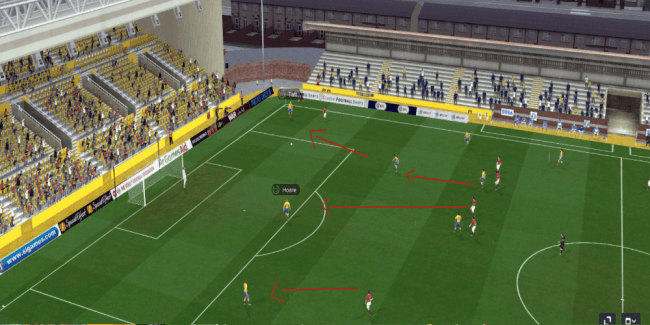 In this screenshot both teams are situated high up the field in the oppositions half pressing aggressively in an attempt to win the ball back providing successful may lead to a goal scoring opportunity as team mates run forward in support, both sets of strikes are forcing opponents into making a mistake whilst the other is man marking or cutting passing lanes the other is aggressively closing down the ball. 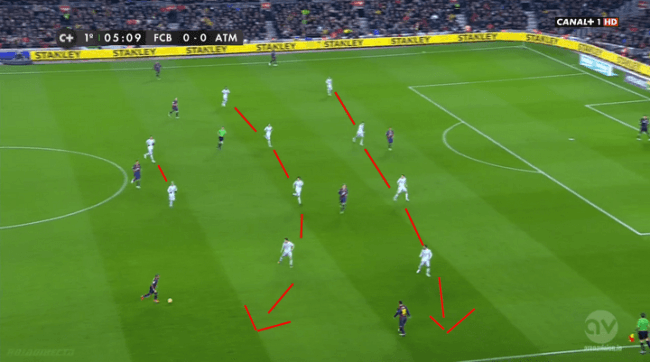 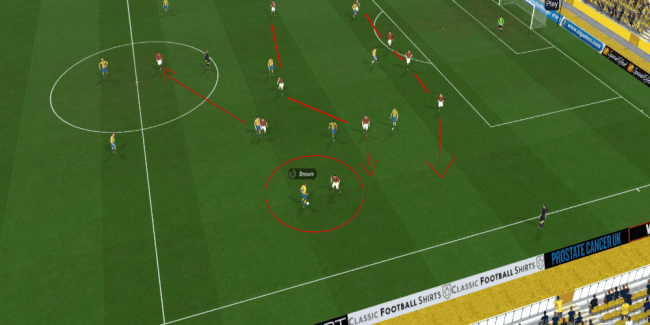 Simeone's side are known to keep shape in the centre of the field whilst forcing opponents out wide with pressing from the strikers, once the opposition have the ball on the flank the team adjust and close the ball down with aggression whilst keeping team shape and launching a counter attack.

Bellow is an example that lead to a goal scoring chance. This time the ball was successfully won back and the team are set for a fast attack at goal to catch the opposition off guard.
- Defensive line pushes higher
- Players surge forward
- Disciplined shape and fast attack
- Passing options became available and players exploit the poor positioning of the opposition 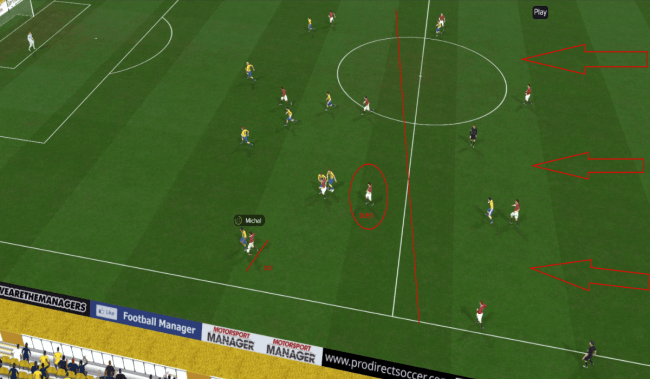 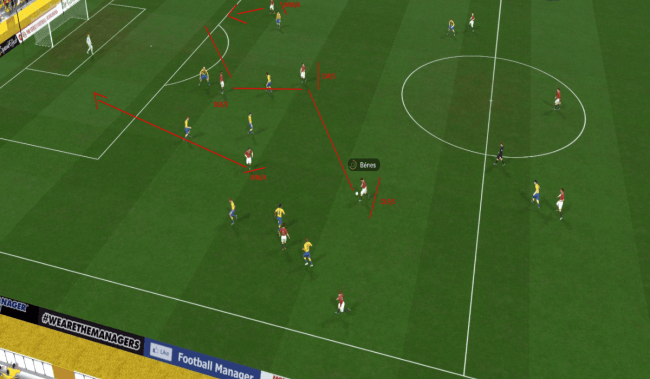 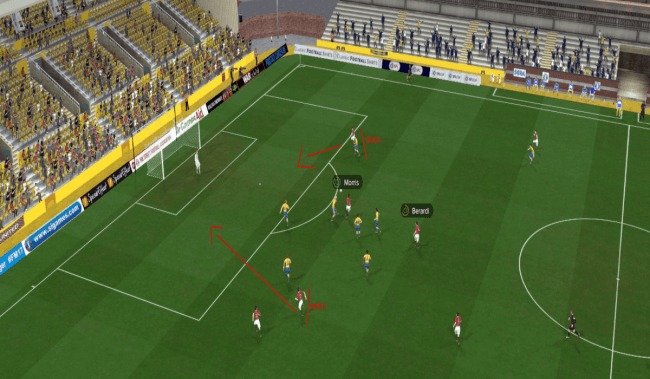 Space Opens up behind the defence and a clear cut chance has appeared.
Wide midfielders display good off the ball runs that lead to a goal. 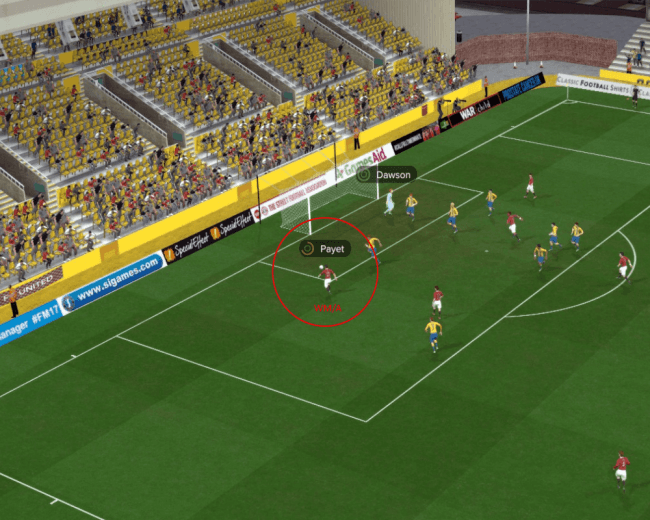 WM/A surges forward and finds himself in a good position.
Keeper makes a good save and the ball falls nicely for the open goal.

PLAYER INSTRUCTIONS FOR EACH ROLE 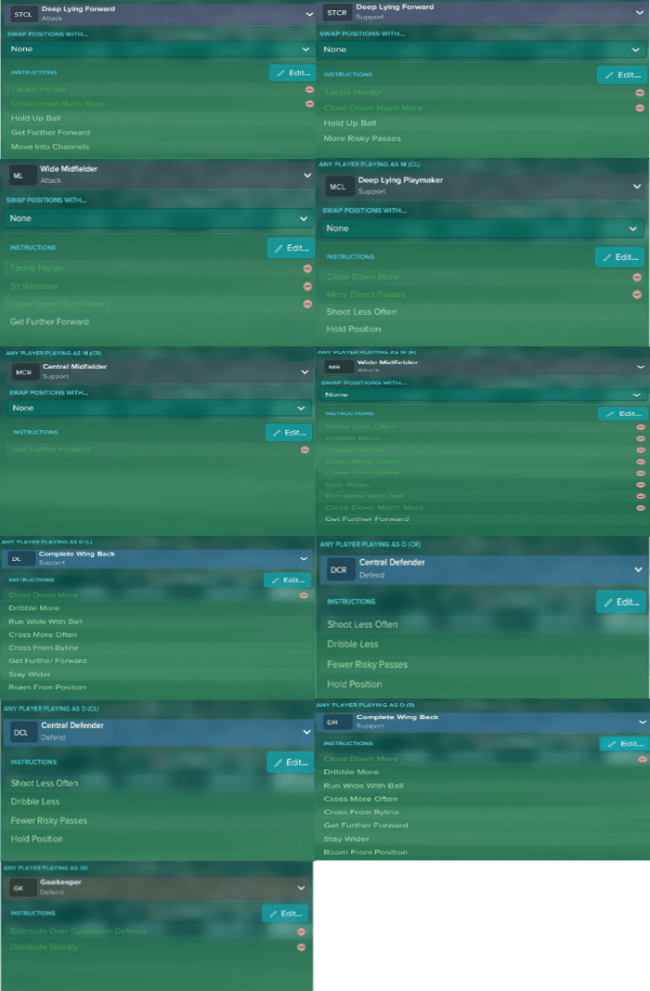 Included a variation with strikers as DLF's. The only difference is that DLF's are set to man mark opposition CM's to defend like the SS.