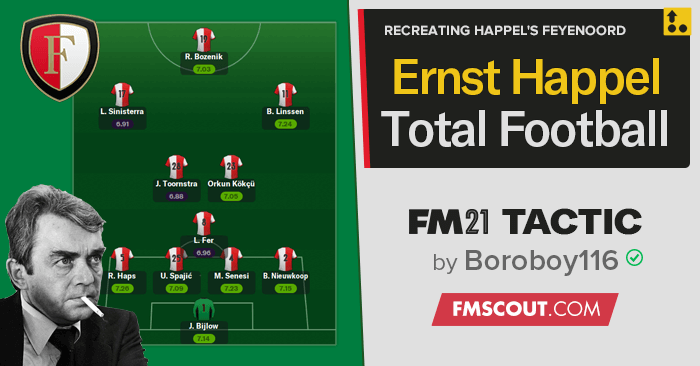 
Ernst Happel was born in Vienna in 1925, he would go on to represent Austria playing at centre back during the 1940s and 1950s. He played 51 times before retiring in 1959 and taking up coaching.

Happel is undoubtedly one of the greatest managers of not only his generation but of all time, his achievements are criminally undervalued and he is rarely spoken about compared to his peers like Shankly, Michels and Sacchi.
When talking about total football Happel’s role is often overlooked and there can be no doubting his influence on helping to shape the modern game. He was a trailblazer when it came to analysing his opponent’s which led him to conquer European football.

Happel also won league titles in four different countries: Netherlands, Belgium, Germany and Austria. Most of his success can be attributed to his attacking strategy, as well as his team’s ability to put pressure on the ball.
One of his most remembered achievements was coaching the Dutch national team to the 1978 World Cup final.

Happel joined Feyenoord from ADO Den Haag, where he began his coaching career. When he took over ADO in 1962, they were a team fighting to avoid relegation, however, under Happel’s leadership, they would be transformed into a team capable of challenging and winning the Dutch Cup in 1968. During his time he developed his ideas and style of play around an aggressive pressing game and possession football.

A year later he moved to Rotterdam to take the Feyenoord job. Immediately he made his mark firstly changing from the 4-2-4 to the 4-3-3. His team were able to dominate the centre with their extra man in midfield allowing them to dictate games.

In his debut season, he led Feyenoord to the 1970 European Cup becoming the first Dutch team to win the competition. In the same year, Feyenoord also won the Intercontinental Cup (now known as the Club World Cup), and during Happel's five-year stay in Rotterdam also claimed two Dutch championships and the Dutch Cup.

Rinus Michels would take many of the principles and concepts used by Happel and apply them to his Ajax team and thus Total Football.

Check out the video for a full breakdown and analysis of the tactic.