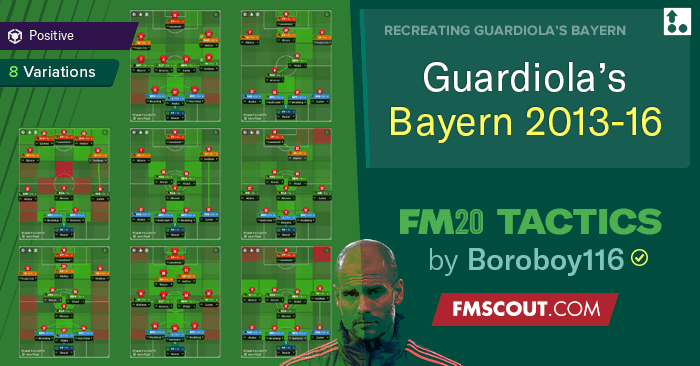 Pep's influences are more diverse. Before taking charge of Barcelona, he sought out the views of Marcelo Bielsa, the renowned Argentine coach. And perhaps most significant: As his playing days were drawing to an end, he made his way to Mexico to play for, and pick the brain of, Juan Manuel Lillo, a little-known, much-travelled Spanish coach he had always appreciated. It was a curious chapter, and a critical one, in Guardiola’s career. If it was in Barcelona that his ideas were developed, it was in Mexico where they were perfected.

Guardiola had said that the three coaches he admired the most were Lillo, Bielsa and Arsène Wenger, Lillo, said. In late 2005, with his friend working in Mexico, Guardiola saw what was probably his last chance to experience playing under one of them. Lillo and Guardiola spoke daily while they were together in Mexico, swapping and building ideas. Lillo, humbly, rejected the notion that he could take any credit for the coach Guardiola has become. Still, it is telling that Guardiola has described Lillo as his “maestro” and “the best coach I ever had.”

Pep Guardiola would replace Jupp Heynckes as Bayern Munich coach in 2013, European football stood up to take note of the record German champions' intent. Heynckes would leave the club in Guardiola's trusted hands with, Bayern having just celebrated the most successful season in their storied history winning the treble.

Bayern was on top of the world when Guardiola arrived. His assignment – to make Bayern even better – was not an enviable one, but if one man could do it, Guardiola was "the one." The Catalan already had one of the most impressive CVs in the game, having led Barcelona to Spain's La Liga title three years in a row, and guided them to two UEFA Champions League crowns. Pep wanted to prove he could do it somewhere else.

Unable to achieve and replicate the success of the treble-winning side was the biggest regret of Pep, ultimately losing in the semifinals three times to Spanish opponents. However the football he installed at Bayern, born out of his extreme obsessiveness, attention to detail and tactical knowledge, the club nor Germany had ever seen before. Bayern choked the life out of opponents with their coach's ultra-possessive style, yet entertained fans with extraordinary combinations and great team goals. Guardiola took the best of Heynckes' ideas, successfully instilled his philosophy, and turned Bayern into the most dominant force in German football history, taking them to a new level.

Understanding Pep Guardiola as a person is essential to knowing how and why he implements the system he does. His coaching style integrates a holistic approach to player relationships and a combination of demanding results along with player development. Pep’s appreciation for and utilisation of the technical and creative aspects of players cannot be understated. Pep establishes a culture of critical self-analysis, passing excellence and spatial understanding amongst his players. As famous striker Thierry Henry says about Pep: “He makes you understand how important it is to stay in your position, understand space, understand that the ball travels faster than anybody else, understand that you need to enjoy the game simply to win the game.”

Pep typically spends two hours per day talking one-on-one the positional demands from his players. It is not just the principles of position and movement that Pep develops, but the culture of technical and tactical intelligence. “Pep doesn’t just give you orders,” said Gerard Pique. “He also explains why.”

People often assume that a Guardiola side just wants to keep the ball for the sake of it. However, this couldn't be further from the truth, as you can see from above Guardiola values positional play and as a result of this, his teams often dominate possession.

Throughout his reign in Bavaria, Guardiola showed just how fluid and flexible astute a coach he is. Pep often changed formation every week depending on the opposition and the players available to him. During his first season Pep mainly used a 4-1-4-1 formation or the 4-2-3-1 formation. During his final season in charge, he used far too many formations to list; I have attempted to imitate and replicate eight formations used across Peps time in Bavaria. I used the 2011-12 retro database and tried as best I could to build the Guardiola team. The image below shows how many formations I used. 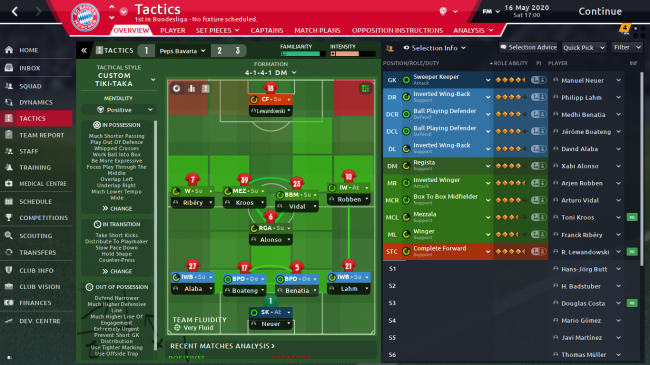 This can be seen as the base tactic and can be used either home or away and in big European games. One of the hallmarks of Peps Bayern teams was the use of a single pivot. However, unlike at Barcelona, Guardiola would use inverted wingbacks to help defend against fast counter-attacks used in the Bundesliga. 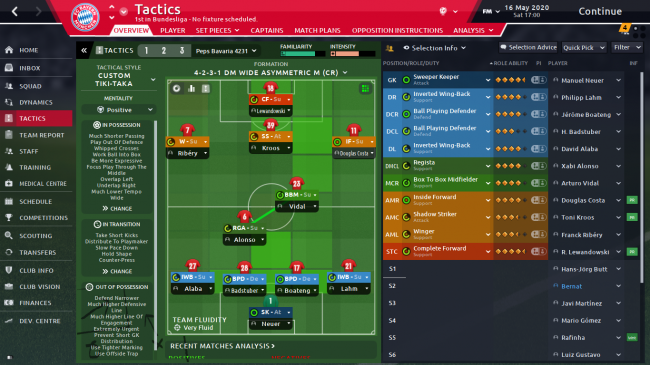 Mainly used towards the end of his first season, this allowed Lahm to play as a box to box midfielder alongside Thiago with Kross pushed further forward when Muller played on the right. Muller would play through the middle when Robben was available. Therefore I used Robben as an inside forward and Muller as a Raumdueter. 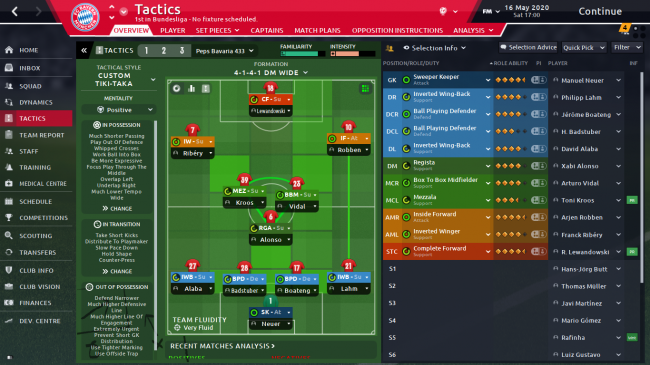 The formation most associated with Guardiola, the wingbacks, would invert alongside Alonso, thus allowing the midfield to push further up. Robben would be the more attacking winger. Along with Ribery, they would stay outwide as the team tried to create a 1v1 situation for the wingers, who could then attack the byline before crossing. 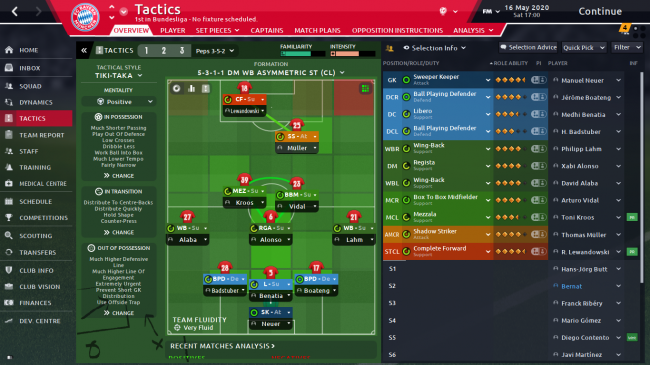 The 3-5-2 was used by Pep, with Muller playing off the out and out striker, the wingbacks provided the width, and the midfield three was able to ensure they weren't outnumbered in the midfield. 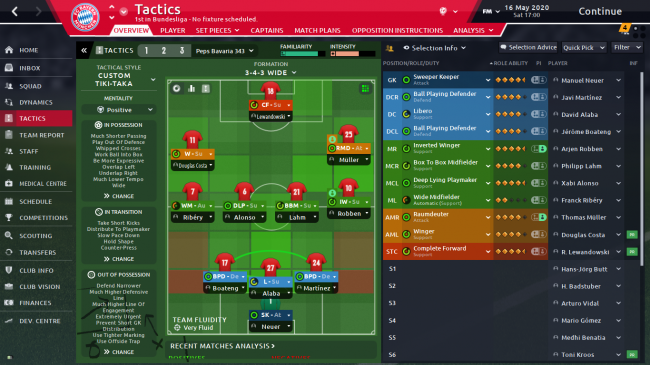 The flat 3-4-3 allowed Bayern to overload and confuse the opposition, especially in the wide areas. Again this would let Bayern's wingers to get 1v1 with the opponent's fullbacks often beating them on the inside to drive into the penalty area. If using Muller, he would play as the Raumdueter, with Robben behind as an inverted winger. 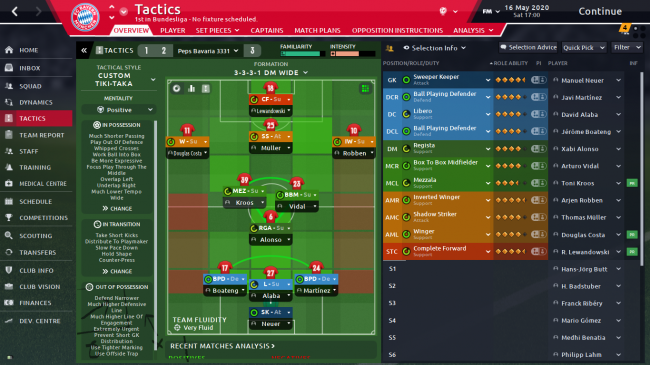 The formation used by Pep's former manager Johan Cruyff. Pep used this system sporadically with the most high profile game being against Man City in the Champions League. The diamond allowed Bayern to control the centre of the pitch, allowing their wide players to cause havoc. 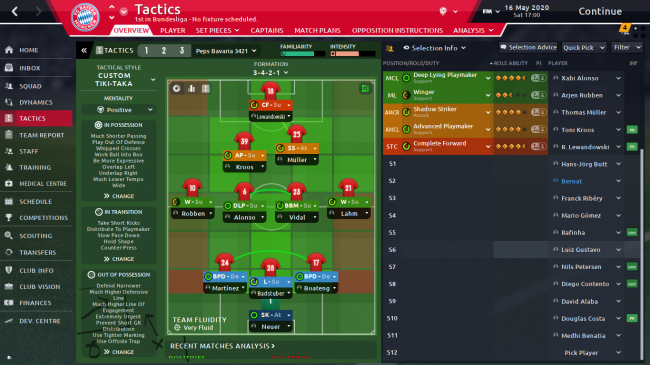 Throughout his time at Bayern Pep hardly had Robben and Ribery available especially together. Without his primary wingers, Pep would use Muller and Gotze behind the striker. Guardiola would also use his wingbacks higher up the pitch as wide midfielders. 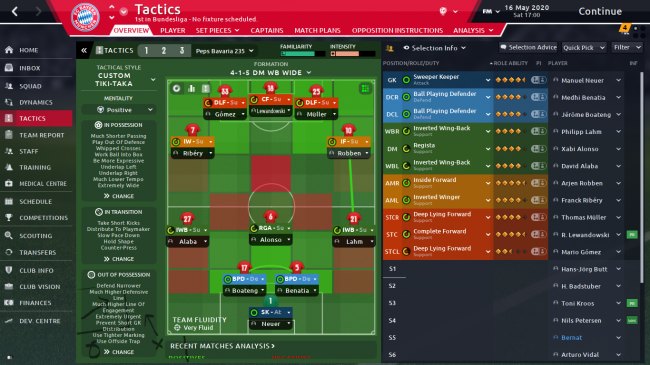 The most attacking of the formations used, used when teams are set up to defend deep and try to survive for a draw. I only started in this formation against teams at the bottom of the league and at home. If I needed a goal, I would change into this system in the second half. The CB's would be protected from quick counters by the IWB's.

The results were excellent in the League seen by the domination of the stats. The team seemed to struggle more in Europe and often failed to take their chances. The most disappointing aspect was the DFB Pokal losing to Dortmund in extra time at the quarter-final stage. 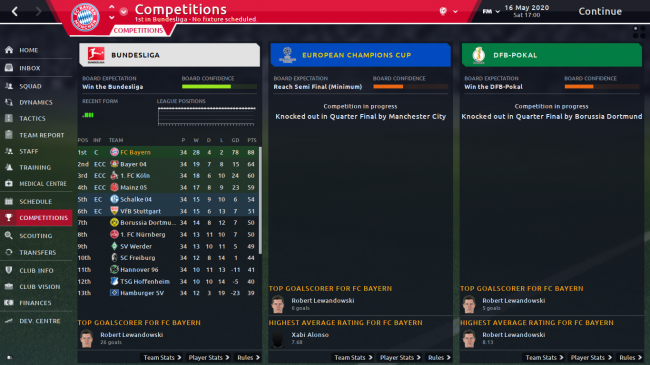 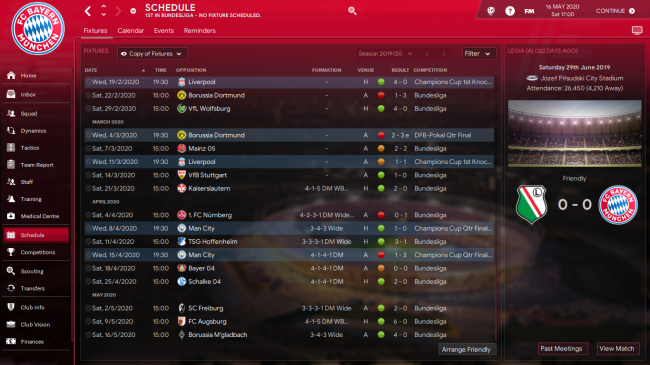 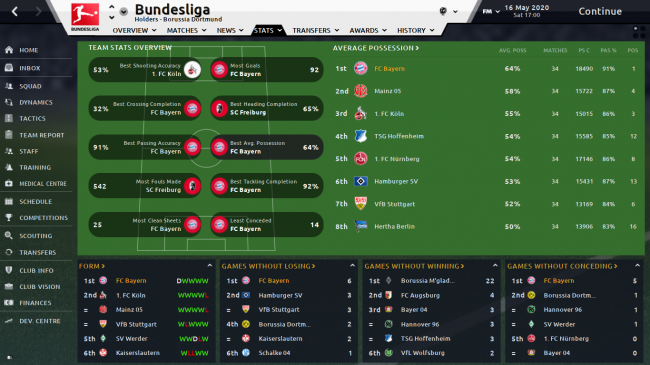 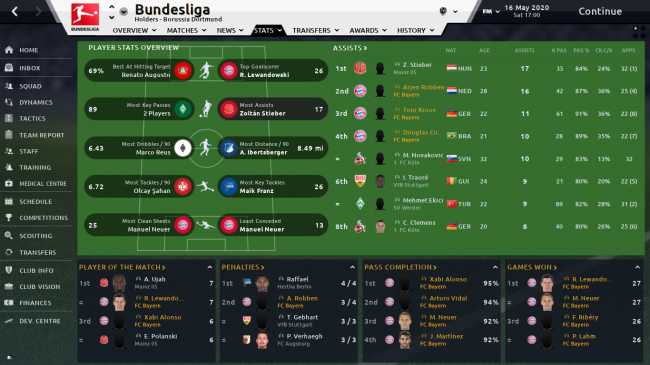 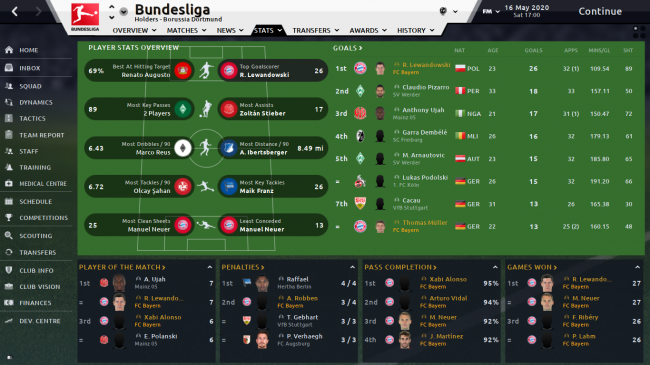 For training, I used the preset possession and tika tika schedules, but I would add match practice options for the additional sessions.