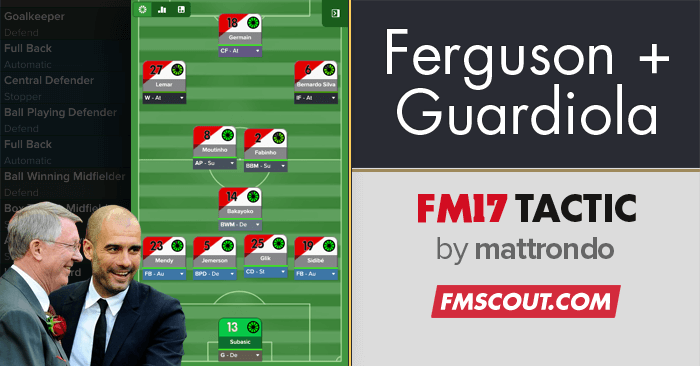 I am more than happy to share this piece of tactic with you. But first let me give you a little bit of background on what brought me to create it. I might be a bit of a weird dude, but even as an Arsenal and Real Madrid fan, I could never help but admire Sir Alex and Pep's craftmanship on their respective teams. The exact image I have in mind is 99' United and 2010 Barcelona.

So after a few years of playing FM with pre-established or downloaded tactics (thanks fm scout), I came up with a crossover of both these gentlemen's antics, fusing what I found was best in both of them. In this career, I'm playing with Monaco. This tactic works great because my players have the exact profile it demands !

So let's get down to business and break it down to you guys step by step : 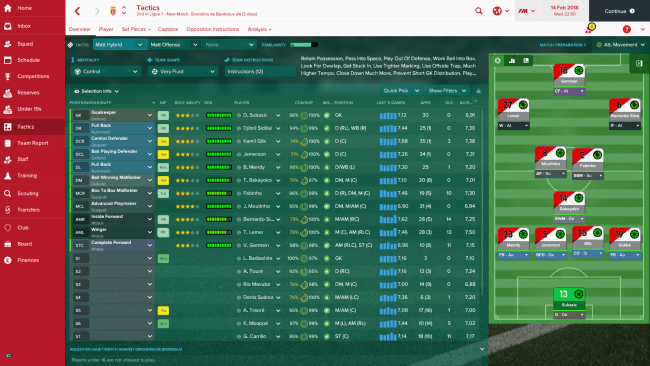 The idea was somehow pretty simple. What I wanted to do was fuse the high-octane offense of Fergie's red devils with the midfield upper hand the late Guardiola era Barcelona had. The first question was, what system do I go for ? As you can see, I opted for a 4-3-3. While it is fairly simple to develop a fast and attacking type of football regardless of the system, I find it quite difficult to get control of midfield with only two players. I feel like 4-4-3 is the most balanced, versatile set-up possible. First let's take a look at the general instructions to show how I did it : 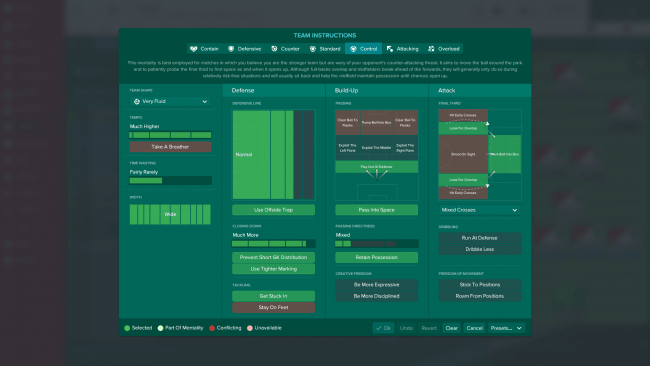 Mentality is set on Control, leading to an adventurous but cautious, dominating team. The shape is very fluid. This will lead to all of your ten field players counter-attacking at once (while not overstepping their bounds), with attackers willing to defend and defenders unafraid to pass the ball forward.

Now digging into the general instructions, let's see how this hybrid concept comes to life :

You want the highest possible tempo with no time wasting. Your players will not hold on to the ball unless it is necessary. When counter-attacks break, they will get the ball forward in no time, outrunning the defense. By using the full width of the pitch Guardiola style, you give more air to your block and create spaces. Now you would be tempted to use the highest defensive line but I find that A : on offense, it doesn't give enough space to your mids and B : on defense, even when playing the offside trap, it leaves you too vulnerable to long balls.

Now another one of Guardiola's features I admire is his pressing : the way it is setup, your opponents will have have no time to breathe from your players marking tightly and closing down, and the goalkeepers will be under constant pressure. Getting stuck in will also establish a strong upper-hand, making them shy away from contact. You'll see on the individual instructions that a strong emphasis is put on marking tightly, in order to really asphyxiate the opposing team.

Moving on to the build-up, this is where the most fusing takes place. You will of course want to retain possession, starting by building out of your defense, but rather than hogging the ball and playing tiki-taka, choosing mixed passes will lead to players alternating between short to long passing depending on the situation. But this way, they will always look to go forward whenever possible, all without risking to turn the ball over.

As far as attacking goes, working the ball into the box is important while you wait for the best opportunity, may it come from within though your attackers' movement or from the wings from your full backs overlapping.

(I don't use it much, but this tactic works like a charm in a Counter mindset, all you have to do is not to retain possession)

GK : Defense : Pass it forward, fewer risky passes, distribute to full backs, roll it out, distribute quickly : Your keeper will always look to pass the ball short to your full backs, preventing the ball from sticking around the danger zone too long. By distributing quickly, he will know when to act fast to trigger counter-attacks.

Full backs : Automatic : Mark tighter, more direct passes, stay wider, run wide with the ball : Being set on automatic, should you have intelligent full-backs, they will adjust to what the game needs from them. With more direct passes, stay wider and run wide with the ball, they won't be tempted to clog the midfield but rather try to get forward as fast as they can. They will contribute to your construction when necessary.

Ball playing defender : Defend : Mark tighter, more risky passes, hold position : Meet your Piqué/Ferdinand ! You will need a player with good passing ability here. Paired with a pure stopper, this guy will be the initiator from the back, sometimes trying to reach your attacking players through accurate long balls.

Central defender : Stopper : Mark tighter, hold position, shoot less often, dribble less, fewer risky passes : And here's your Puyol/Vidic ! The goal with this player will be to stop the offense from developing, but the less the ball is in his feet the better. He will get the ball to the other defender to let him set up the play.

Ball winning midfielder : Defend : Shoot less often, mark tighter, dribble less, fewer risky passes, hold position, close down much more, tackle harder : Enter Busquets ! The goal is simple : you want him to be your anchor, protect your defense, win balls, and feed his teamates around with the simplest of passes for them to go forward.

Box to Box midfielder : Mark tighter, roam from position : Kind of my twist to the plot. You could compare this players' profile to Paul Scholes. The free roamer. Capable of defending, passing, and possibly finishing. This guy will do a bit of everything to support your plays both offensively and defensively. Allowing him to roam from his position will totally catch defenses off guard, constantly leaving openings to run through.

Advanced playmaker : Support : Mark tighter, shoot less often, more risky passes : The Xavi, the artist ! This one will be your creator in midfield. Passing the ball forward to the offensive players, holding it under pressure and dictating the tempo. I chose to make him adventurous, but nothing stops you from restraining from attempting risky passes and make him more dull.

Winger : Offense : Mark tighter, roam from position, dribble more, run wide with the ball, cross more often, cross from byline, get further forward, stay wider : Giggs is in the house ! By playing a leftie on the left side (or the opposite), you get an awful lot of crossing opportunities. If this player happens to be a speedster, the roam from position and get further forward instructions will make him virtually impossible to guard.

Inside forward : Attack : Mark tighter, roam from position, dribble more, cut inside with the ball, cross less often, get further forward : Your Ronaldo ! Pretty straightforward. You want this guy to cut inside to create opportunities, mostly for himself. He will then also leave some space behind for the full-back to take advantage of.

Complete forward : Attack : Hold up ball, dribble more, more risky passes, get further forward, move into channels, roam from position : A Messi type of player. Capable of holding the ball and passing it to his teamates, to cut through the box to convert crosses into goals, but also to move through open spaces for his teamates to find him with quick passes.


So there you have it ! I believe this tactic is applicable with pretty much every club and will give you results. I hope you'll enjoy it as much as I do. Any feedback is more than welcome, and I'll be happy to answer your questions.

Have a good one !