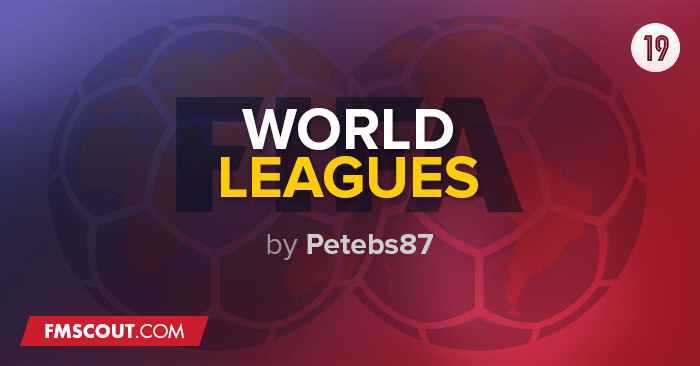 All the best clubs in the world on the same nation. This time we have one more division, 11 in total, meaning there are 1180 clubs for you to guide to victory!

I have lots of new things to talk about this year, so let me start:
First of all, the divisions. They are divided in 11 tiers, like so:

It’s all very similar to the last year’s database, but we have one more division this year, which means 200 more clubs. Also, unlike last year, not all Leagues have playoffs. They will only appear on tier where you lose divisions (fe. League 10 to 9, or League 6 to 5).

Now, if you have ever played thins db, you known that I love cup competitions. So, this year we have Cups for every tier in the nation, plus a national cup with all the teams in the db, plus a Champions League for the top teams.

Here’s what to expect:

Clubs were put on their respective tier according to their reputation only. The quality of players nor the latest results were taken into account.

Cups will be more competitive this year.

There won’t be any B teams on the database this year.

This year I tried to give the db a more realistic feel. I you played last year’s db, you would all teams would be rich in only a year, taking away the challenge and a bit of the fun in the game. On top of that, the rep in all divisions was way too high. All that meant you could have a top level team in div. 8. It was almost game breaking.

I wanted to steer away from that, so I started thinking how would a league like this work in real life. And it hit me. Just like real life, the top teams would get a lot of money, while the others would got nothing, in hopes they one day be good enough to climb up the ranks.

With that in mind, I can tell you amount of money one top tier is obscene (Premier League receives 258M€ of tv rights each year fe), but on the other divisions below the 6th tier won’t receive enough to pay for the transportation cost. As I said it will be harder this year. So how can you make enough money to rise up the leagues?

Cups. Cups is the answer. Depending at what tier you’re at, you’ll receive at last 1M€ just by participating on the cups each year. A good cup run will give you at least 11M€. Imagine that as a low league team.

VAR is also present, but also for leagues above tier 7.

Also I’ve messed around with the calendar trying to make sure there’s at least 3 days between game. In any case, to balance any possible calendar overloads, teams above tier 6 can make 1 extra sub in extra time in cup games.

And that’s it really. Please test it and give me your thoughs. Awards will come in a future update How to install FIFA World Leagues on FM19

Open Football Manager 2019 and start a new career, In the top right of the screen, under "Database", make sure this file is selected.