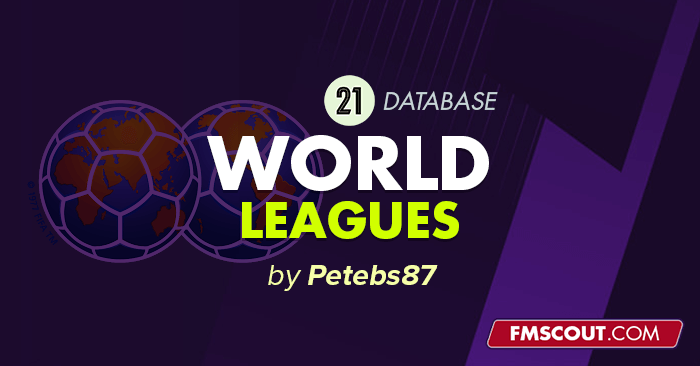 You have 1080 teams to manage across 8 tier systems.

This year's edition comes with a few changes.

Due to some issues in the editor I'm unable to make a cup that contains all teams in the database. In short, the best I could do was to make a 518 team cup. Therefore I've made the decision to have 3 different cups, one with 200 teams and the other two with around 400 clubs. It was the best way to balance this limitation.

In addition to these 3 national leagues, you'll also have a division cup per division and there's also a "champions league" between the first two division and 4 teams from the 3rd division.

The Premier League Cup is run oddly if you compare it to the other division cups. Basically it will be a mini champions league. Unfortunately there's no way (known to me) to define exactly the date for the group stage games, so you'll have to be prepared to a huge load of games in September. The rest of the games will take place in January, as there are no games for the champions league on that month.

In my opinion this will bring a bit more realism to the game. Having that many games concentrated in such a short amount of time will mean you'll have to prioritize competitions, and having reworked the money payments, I would say that will be extra important.

In the topic of money, I've tried to balanced the payments in order to give a more realist experience. In the last iterations, it was super easy to to have a rich club in any tier system. My logic was simple: if you're on a higher league, people want to see your games, and your prizes should go up accordingly, but if you're not, you're just fighting to get that chance, so the prizes for league 5 and below are way smaller this year, and the cups won't help that much either.

Having said that, most clubs will have a substantial amount of money due to having used a relatively rich country to develop the database.

I hope you guys enjoy it!