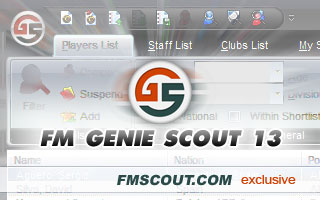 We are happy to announce that there will a Genie Scout 13! Eugene has been working on the new version the last few weeks, but like last year I didn't want to put pressure on him by making any announcements until we were certain it's actually possible to produce a working version for Football Manager 2013.

FM Genie Scout is the world's most popular utility for Football Manager.

We are honored to be exclusively releasing this awesome application since 2009, and it's always great news to be able and continue this tradition. We try our best to deliver Genie Scout to the world every year because your support to this project is outstanding.

Genie Scout 12 generated almost half a million downloads, more than any previous version of the series. We are hopeful that Genie Scout 13 will raise that figure even higher.

Sports Interactive made it almost impossible to read data from save games in Football Manager 2013. As a result, Eugene had to re-write the entire engine of his app to work real time and read from memory instead. So when you try to load a game in GS13, you must have FM13 open and your game loaded.
Don't worry though, it won't require you to install any frameworks.

The problem with this change is that GS13 won't work with Mac at all, because Eugene doesn't own a Mac and how memory works there is different.

Public edition
We won't make any promises on the release date of the public version, but most likely we'll be able to release it before the end of November.
Update 26 November:
Eugene needs to complete a business project by 7 December and given that he has time to work on GS mainly during the weekends, the release of the public version is possible to take place shortly after that date. There's still a chance for 1-2 December, but it doesn't seem very likely at the moment.
Update 1 December:
As expected Eugene won't be able to release the public edition before 7 December. So we're now looking at a possible release date of 8-9 December.

"g" edition
The "g" edition, which is the one for people who donate, was released on Friday 9 November (1st beta). On Saturday 24 November, Eugene released the 6th beta to address more bugs.
Reminder: The "g" edition is ad-free and has a few extra features compared to the public edition.

You can now donate for GS13 "g" edition.
Do not report bugs in the comments below!


How to get Genie Scout 13 public edition earlier!

You will receive an email with the download link to the first Genie Scout 13 beta version of the public edition a bit earlier than everyone else.
How much earlier? Well, it could be for half a day or two days. Once that time has passed, it will be available for free download on our site of course for everyone else. Why lose a single hour though? Signing up for our newsletter is free!

Every new GS13 version will be available to our newsletter subscribers earlier.

50 comments have been posted so far.