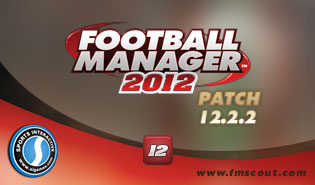 Football Manager 2012 Patch 12.2.2 is now available to download. Steam will need to be set to ONLINE mode to automatically update your game with the patch.

This patch addresses the reported issues of the 12.2.1 Update. In a nutshell, it's a hotfix for FM 2012 has just been rolled out to fix the Turkish Premier league winner not credited issue & the Hungarian foreign player rules.
There is no new database option when starting a new game.

If you get any messages stating the game is now unavailable, we recommend verifying your cache.
If you have any feedback in regards to this 12.2.2 update please post it in the Official 12.2.1 Update Feedback Thread.

52 comments have been posted so far.