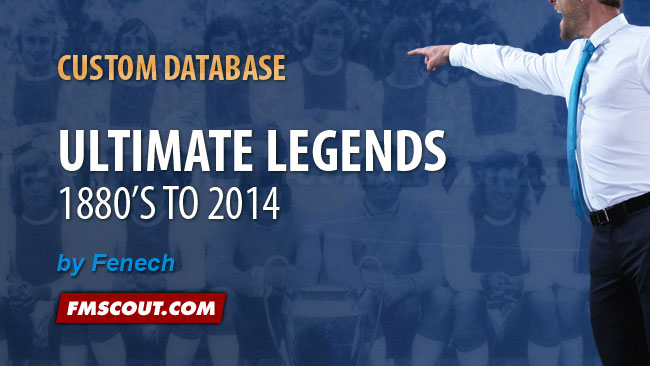 Can you defeat the Total Football of Ajax Golden Generation? Can you handle being kicked all over the park by the Mighty Whites (Leeds)? How will you stop the world's legendary players from performing? What are you going to do when they come to play against you? Can you motivate a team to win against a side managed by Brian Clough? Is it possible to even beat a Jose Mourinho Team with 25 of Chelsea's best ever players?

Legends and Stars from 1880's to present day to give each top team 25 of their best players where possible ensuring a balance of playing positions in each squad.

CURRENT NUMBER OF LEGENDS AND STARS: 1400

This promises to be the most comprehensive and in depth Stars and Legends game ever.

Realistic data and historical records to ensure complete accuracy in game due to extensive research and public opinion.

25 man teams for all the Top Clubs around the world.

The return of Wimbledon.

The return of Ajax Golden Generation

The return of Sheffield Wednesday formerly known as The Wednesday

The return of Wolverhampton Wanderers winner of 13 Trophies overall including 3 league championships and 4 FA Cups.

The return of Sunderland, the team of all talents, 6 league championships and 2 time FA Cup Champions.

The return of Don Revie's Leeds United, The Mighty Whites, 3 time league champions, 2 Europa leagues and the most successful team in England in the Seventies.

The return of Brian Clough's highly successful Nottingham Forest, 13 trophies including back to back European Cups and 1 league championship.

No Sugar Daddies. Starting Finances dependent on total number of Trophies won from 1888 to 2014, League Division and Reputation.

Top Division Clubs Chairman / Presidents / Owners back from each clubs greatest period of success or achievement.

Top Division Clubs Greatest Managers back based on their first real period of Success or Greatest Achievements where possible.

Where possible legends will be between 14 to 25 again however there will be older legends in the game to give balance to the teams and realism to the game.

All players will be at their clubs at the exact age they had joined those clubs. This can easily be checked via Wikipedia and other top online sources.

If you don't have a "graphics" folder then just create a new folder and call it graphics.

2) When the Zip File is in the Graphics Folder, right click and then press 'Extract Here'.

3) If you can't see the pictures in game, go to FM, My Preferences and reload skin.

If you don't have a "editor data" folder then just create a new folder and call it editor data.

2) When the Zip File is in the Graphics Folder, right click and then press 'Extract Here'. Ensure that the only files in the editor data folder is the file entitled FenechUltimateLegends1880to2014.dbc and the config file.

Make Sure you press edit and ensure that the Ultimate file is the only editor ticked and the continue to load the game.

It's up to you but nearly every nation has legends and stars so you if you don't load a lot of nations, or at least make some of them view only, it just means you may have to search for some players in the search bar on the top menu of the game as they may not all show up in the player search depending on what leagues you have loaded.

That's it. Any Questions please ask and I will try to assist and support if the community is unable to help themselves. Good Luck to you all. It's a brave new world you are entering. May the Football Force be with you!!!!!

If there are any legends or stars you would like to see in this database then please let me know and the relevant research will be carried out and I will do my best to get them included for you if they have not been previously researched and included already.

I will be releasing previews of the teams that I feel are close to completion. Please note that these are not the final teams but will give you a good indication of what the final team is going to look like. I will also release previews of Players as the project progresses as well.

Further Updates will be revealed in due course. Any Questions please do not hesitate to ask.