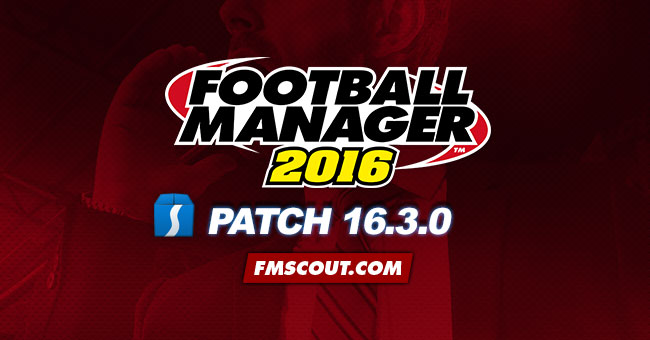 Sports Interactive have finally released the January Transfer Window Update for Football Manager 2016 on March 4th. The official data update patch arrived on Feb 25th last year and on Feb 28th the year before that.

The same question (asking for release date) kept on popping up around the community, but the official response was that not all transfer windows around the world had been closed; focus being on the Chinese football winter transfers - window closed for the top 2 leagues on Feb 26th.

The Football Manager Winter Transfer Update for FM 2016 is now available for download.
The updated database aims to reflect all the latest transfer changes and also includes various fixes and improvements (see changelist below).

As usual the update is save game compatible, but remember that in order to use the new database you’ll need to start a new save game.


To update you will need to close the game down and re-launch for it to update. If this does not work for you or you feel it has not updated you will need to restart Steam.
Even if that doesn't do the trick, then verify the game cache will.

VERSUS MODE
- Fixed issue where imported teams use incorrect badge

CREATE A CLUB
- Fixed reserve and youth teams not using the correct create a club kit colouurs
- Fixed issue where a created player could be cup tied indefinitely.


For any feedback in regards to this update, please use the official 16.3.0 Feedback Thread (requires free membership on Sports Interactive forum).

If you think that the official update isn't as comprehensive as you have hoped, you can grab one of the unofficial data updates we endorse (pr0, Whizzkids, TheFMEditor) and start a new save.