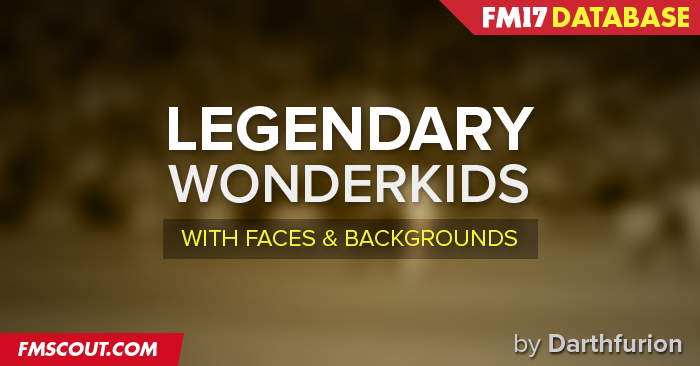 
I wanted to create the MOST REALISTIC set of Legendary Wonderkids that I possibly could! The Wonderkids should enhance the enjoyment of the game for the next 15 seasons!


But some players like George Weah start later, because he only went to Europe later.
But some players' clubs have dissolved so I put them in the next club they played for.

The `Career Plans` section (a section in the data editor) helps to guide the player to the clubs, leagues and nations the player wants to play for, and which ones they don't want to play for!
I based these on REAL LIFE offers the player accepted/rejected, news/media/interviews of the player, but mostly it's based on the nations and clubs he played for in REAL LIFE.
Generally players will NOT accept offers from major rival clubs, unless they actually DID accept offers from the rival clubs in REAL LIFE, ie. Luís Figo

UNLIKE other legends databases, where you can just sign any player you want, this database will try to simulate the REAL LIFE likes and dislikes a player has for clubs, nations and leagues.


Sometimes I send the player on loan to a major club they played for, with a `FEE to buy` ($$$), so the (major) club who they played for has the opportunity to BUY the player first.
I might also send a player on loan to smaller clubs to get experience, because they might not always develop properly in their parent club.
Some players might have FORCED transfers at the start of the game, sometimes transferring at the end of the season, especially if they transferred at the end of their first year in real life!


I don't take requests on this! I have a list of 500+ players to add! (There is an excel spreadsheet in the zip file with all my data)
Each player takes 2 to 4 hours to add! So I can usually only do at most 6 players per day!
Because I make custom graphics (face and background) and I load/check/gather all historic data!
And I read tons of information on each player, then data capture their stats from older versions of FM if I can.
Then I simulate the game for 10 seasons (8 hours) and record their progress and stats
This takes a SHIT LOAD OF TIME! I've been working on this for 2 months already!


Q. Why does player X have attribute Y?


These are loaded as WONDERKIDS (they will develop semi-randomly), I only set some starting attributes for them, loosely based on their final attributes. But they develop differently in different clubs, and when they are used in different positions!

I also use random PA for some players, and other players like Messi I will set to a fixed PA (200 in Messi's case)

Normally I set the starting CA (Current Ability) to about 120~140, and PA (Potential Ability) of 170~200. The maximum CA points I've seen them gain in 1 year was 15, but they average about +10 CA per year until about 24~26 years old.
I cannot predict exactly how many points they will gain, but I have my averages. For example, I normally set a club leader/captain to have about 13/14 Leadership at 17 years old, because they normally gain about +5 leadership by 24 years old. So it should give them around 18~20 Leadership. I have tested the range of ALL attributes, they are listed in my Excel spreadsheet. A LOT of work has gone into trying to predict their final attributes, but it's not an exact science, I just do the best I can!


Q. Why does player X have height Y?


I set the height on average 2cm lower than their real/final height at age 17. On average they should grow 2cm. However, they can gain anywhere from 1 to 4cm, so they might reach their real life height, but it will be close enough!


MY CUT OUT FACES


This is the FIRST and ONLY legends database with custom made CUT-OUT FACES!


I made ALL the black and white cut-outs, and about 50% of the color ones.
The rest mostly come from the sortitoutsi.net Cut Out Player Faces Megapack!
Credit is given inside the readme file!
Some come from futhead website, but I'm slowly replacing them!

I made the cut-out faces for:

You can use them if you give me credit!

Help wanted on the cut out faces! If you help me cut-out faces, I'll add your legends!
I prefer to get faces from about mid 20's if possible!


I have the faces for them, but I have NOT added/changed them!
I'm still not sure if I want to add a `Junior` version of them (ie. keep them in the game but add another copy of them as a wonderkid?) Let me know what you think!


How to install the Legendary Wonderkids database in FM17