For a long time I have wanted to share my tactic, which I have been using in Fm16 and now adapted and improved it to a Fm17 version, so fasten your seat belt, for here it comes.

I have chosen to manage Juventus as the players fits my tactical ideas and I wanted to bring them back in the top on the international stage. After missing out on the champions league trophy against Barcelona in 14/15 and not won the competition since 1996 I solved their problem with my winning tactic. 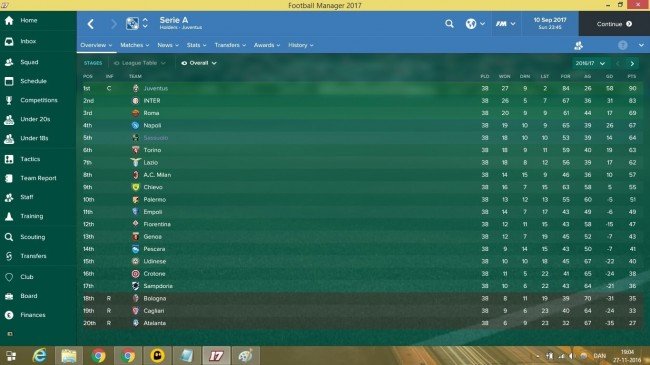 Training settings:
Main Focus: Fitness
Intensity: Average to high.
I start with high and then after 2 weeks to a month of training I switch it to average. Then I just leave it on Fitness and average for the rest of the season. It works, everybody were satisfied/happy, didn't receive one complaint.

The idea about my tactic:
Well I'm big fan of the 3-5-2 system as Antonio Conte used in his time in Juventus. But I simply couldn't make it work, so I changed my tactic to a 4-4-2 Diamond. Which will allow me to dominate the midfield but still have width as my wing backs create. This will not only create variation in the game but also make it difficult for the opposition as they are outnumbered in the midfield, so either they cover the wing backs and then their will be plenty off space to play through the defense or they will try to match my midfield which then of course means more space and time for a cross. 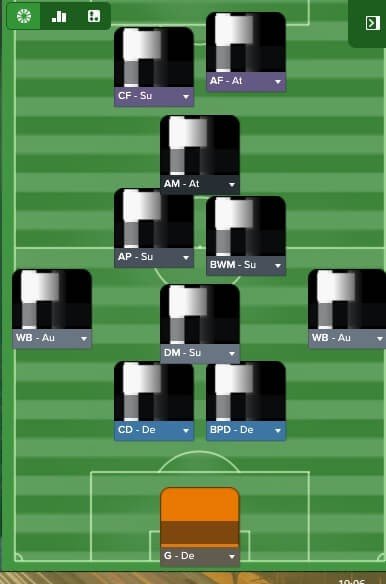 The overall philosophy of the team instructions is that I want to stress the opposition, win the ball high on the pitch, make it difficult for the opposition to close down my team, get a lot of balls into the box either through long throws or crosses which will keep the opposition under pressure throughout the game, control the midfield and play aggressive. I have selected the "standard" mentality as I want to achieve a balance between stressing the opposition and not exposing my own defense. If the game is under control and the team needs a little extra boost to go for a win I will change the mentality to attacking during the match.