Hello FM Scout and welcome to this year's wishlist article. As you know, the next iteration of the Football Manager game series is traditionally released around late October / early November.

The summer is upon us, so it's time for us FM fans to start anticipating this year’s release which promises to be bigger and better than FM17.

As always, we would love to know what YOU think should be included, so we asked our followers on social media to help us kickstart this FM18 Features Wishlist!

FM17 dropped with a high level of promise and intrigue surrounding just how influential the new features would be, but as always the community has been vocal in regards to the aspects of the game that need further polish.

So far, we have received hundreds of comments on social media and here on the site. We hope that many more of you will voice your opinions about what you want in the game. Get your opinion across by leaving a comment here or on the appropriate thread in the forums; FM 2018 - Changes you want to see.

We have picked out the most creative and interesting comments you posted. Thanks to all commenters whose thoughts are being used in this article. Please keep in mind some comments have been slightly edited for either grammatical purposes or to keep the sense of a certain subject.

This can be interviews, staff meetings that occur every few weeks, talking to a player after a match or your assistant handling the press. 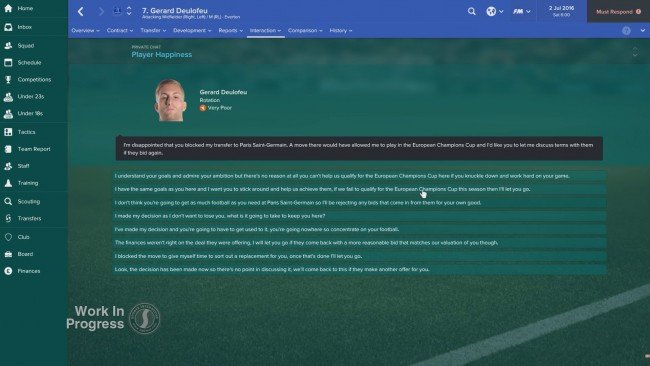 Dylan Jensen - More individual personality for club coaches and officials
Also to interact better with the AI coaches in the game. Give them a personality in the game and let them express it during games, interviews, and to the players and staff of clubs. We need better interaction. Having more personality in our back room staff will open up a whole new element to the experience, talking about players, matches and training with someone who can openly form their own opinions will go a long way in improving the realism of the staff feature.

Mcgrath Shug - More wriggle room when it comes to addressing people in-game
Better comments to answer media questions better things to say to the players on match day it's been the same comment since 2013-14 interim manager positions to become available.

Louis King - More media hype over against-the-odds events
More needs to be done in the media when it comes to small clubs winning major trophies or getting an under dog promoted, should be more of a big thing, at the moment there's no difference if I win the CL with Man Utd or if I win it with Burnley. The media need to be more involved in-game with issue like above, showing shock and writing reports on controversial and stunning incidents. A variety of media reports and articles related to in-game events could see managers become more involved in the media.

Ryan O Donnell - More realistic Social Media
Dealing with the press needs to be improved, the social media side needs upgrading as well as I had a player score 7 goals in a match and still had 2 people on the social media thing complaining about him.

Manuele Celestiale - Revamp the media
Wipe all press conference talk, and create a new one from scratch. The current system is not immersive and you have memorized every possible question and answer within two in-game months.

Matt Rushton - More enhanced team talk interaction
More variety in team talks, but there needs to be more community aspects of the game. Managers and players get involved in that.

Tactical Improvements can range from fixing certain roles to adding more instructions for your players to follow. Anything remotely linked to that is below. 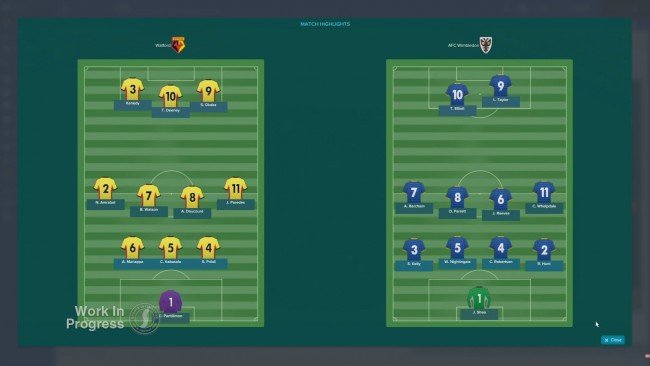 Mark Urban Elvis - Better translation from training pitch to tactics
Training, more impact (realistic) on tactics created. We often see managers say that ‘things are going well on the training pitch’. This should be more clearly translated over time in-game so it feels we are having more of an impact during training, and that we can see it is clearly affecting players.

Anything that can be improved about certain features inside the game, including bugs, a lack of certain things or anomalies. 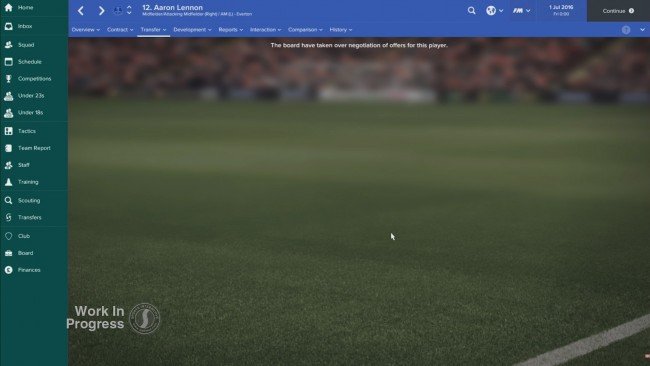 Steven Andrews - Longer managerial life spans
Patience from smaller clubs. I got villa to 8th and got sacked for not reaching my target of qualifying for Europa league. It seems managers are being relieved of their duties a lot more frequently this year than normal, and could be something SI look to improve in the upcoming FM. The manager could be given more patience and security during a season instead of being sacked early on, or if they fail to achieve objectives by minor margins.

Ian Beal - More realism in the transfer market
Selling players needs looking at. In real life players seem to go without much fuss. Try and sell a player on FM and it's nothing but grief.

Anything to do with how the AI acts and thinks in your game. This can be in-game, transfers or any other form of AI Interaction. 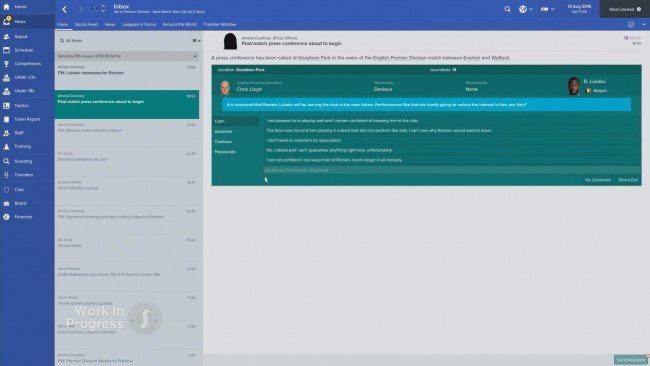 John D. Hernández Rey - More fluid manager tactical changes
Make matches a challenge, preferably based on opponent's skill. I have FM16 and I remember a previous version, where managers like Guardiola or Klopp would change their tactics in the middle of a match just to mess up with your tactics. In FM16 they don't do this or do it rarely: when losing by a large margin if you are dominating (to avoid humiliation) or when winning in order to keep a score (about the last one I am not even sure). Also when they get a red card. The AI managers are quite clever when it comes to setting up their team's, but often lack tactical flexibility in-game, which leads to many unchallenging matches against weaker/poor opposition. Upping the amount of times the AI changes their tactics adds a sense of realism into the fixture. 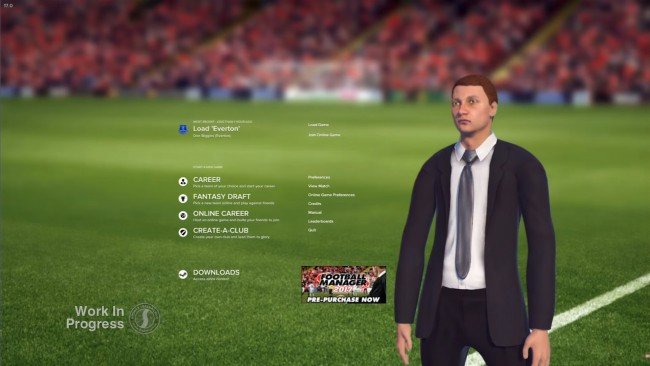 Kapapula Bets - The inclusion of manager agents/negotiators
Managers also need agents like in real life.. surely I would also fancy you have Jorge Mendez to do all the contract negotiation for me. Why should I hustle looking for a job and doing contract negotiation end up being given a lower wage compared to other game managers who are even not close to what you have achieved.

Louis King - More training depth and better reflection of development
The training needs a massive overhaul, training at the moment is very average, needs to be specific to what you want the team to work on in training and you should be able to see the Improvements throughout the season.

Anders Daniel Hansen - Have a bigger impact on the financial side of running a club
To have more control in the commercial aspects in the game. For example, that the manager can involved in picking sponsors and others things like that. Being more involved in the financial side of the game us more control and makes that side of the game more important and routine for players. Controlling where your left over finances actually go will help massively in running the club, and can make things like improving youth, training and stadium facilities.

Cho Chon - Introduction of modern refereeing equipment
offside mistakes, something should be changed there. think about installing video surveillance to help understand was there an offside or not, should be fun! Adding this feature would help keep the game modern and up to dathe with the football rules, whilst making sure no refereeing mistakes occur in-game, which has been a problem for a few people this year.

Colm Kilbane - More realistic player issues
Would love to see more off the field controversy affecting the players. Having player issues in the game makes the experience as a football manager more realistic, dealing with the problems of keeping your players behaviour at bay and managing their lives on the pitch.

Frank Lynn - More versatility in stadium creation
Stadium Upgrades, the ability to pick what kind if stand you want built and to see it in stages of development. Like the old FA Premier League Manager 2001 game. Would be great to see FM18 do that.

We’ll be updating this wishlist throughout the summer, so make sure to share your ideas in the comment section down below.

Hi, I'm a proud Vibe Community and FM Scout member who is passionate about writing and playing. I hope to produce good content for both websites, aswell as enthralling careers and journeys to take people on.

45 comments have been posted so far.