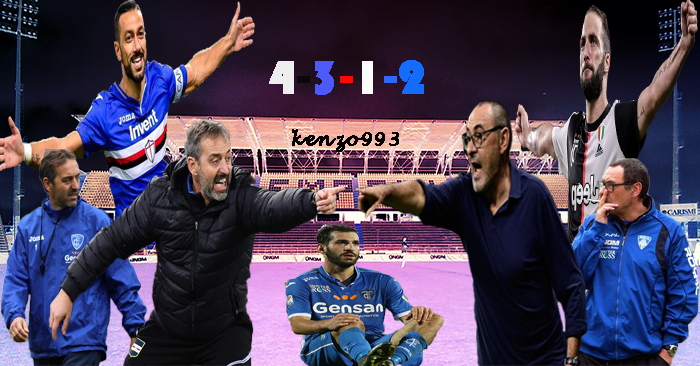 The concept of 'Sarriball' – or 'Sarrismo' – is essentially a fast-paced, possession-based style of attacking football often likened to a vertical tiki-taka . Much like the style of play made famous by Pep Guardiola during his reign at Barcelona, Sarriball features short and quick passes designed to move play as far up the pitch as quickly as possible. Smooth and seamless passing between midfielders to intimidate opposition defenders is a trademark of Sarri's style of play, which in turn forces the back-line to attack the ball – leading to more spaces being opened for the attackers and trequartista to capitalise on, roam freely in and go for the jugular.

Sarri uses a positional defending side where the players adjust their positions based on the position of the ball and their teammates. There is minimal space between the respective lines of the team and opponents are forced wide with the team shutting down passing lanes centrally.

Essentially, Sarriball is a method of high-pressing play (though not to be confused with Jurgen Klopp's gegenpressing) that forces defenders into making mistakes, which are then punished by the attack. The Sarri's teams are superb in defensive transition. They can quickly regain possession when they lose it with a rapid counterpress, when possession is lost they quickly sprint into pressing to win the ball back and start circulating it again. The closest players provide pressure and shut off the ball-carriers passing options.

After losing the ball the four defenders are more inclined to retreat and take up a defensive position closer to their own goal. The fullback press in two way: in the opponents half-field they press strong and after return to the starting position, in their half-field instead one of them press the direct opponent on the side while the fullback on the opposite side forms a three-man defense with the central defenders.


FINAL VERSION IS OUT
PLEASE read the readme file