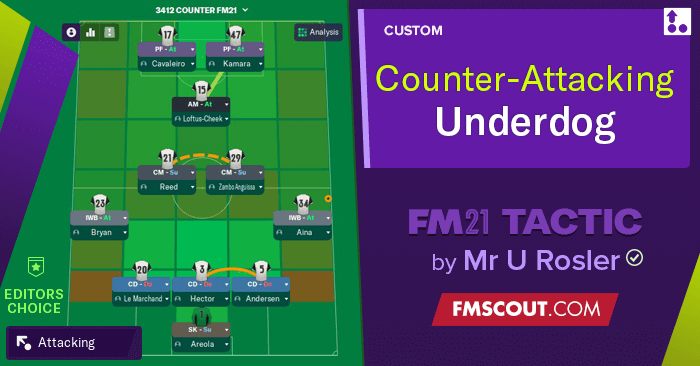 Whilst it’s fun to create tactics for top teams, my own saves start in non-league so as I move through the divisions I’m pretty much predicated to be relegated every year until I’m finally established in the Premier League, so I need to have a tactic guaranteed to keep me out of trouble and give me the opportunity to finish far higher up the league than predicted. 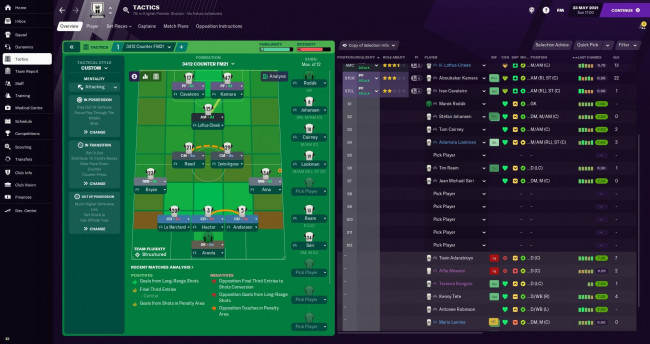 The toughest testing ground for tactics is the Premier League, within that I selected the team predicted to finish 20th, dead last, nailed on for relegation.

Fulham have a squad overrun with solid Championship Players with little genuine quality with the exception of those highlighted below.

In fact you have far more players who think they should be 1st team players than you can register with the Premier League. Whatever you do you are going to alienate 3 or 4 players and your first task is to ensure there are no wider morale issues.

However, there are 3 diamonds in the rough who we will be relying on to stave off relegation.

Zambo Anguissa - A strong physical presence in midfield, perhaps not quite good enough technically to play for a top team, but great for us.

Any of these would be good buys for teams outside the top 6. 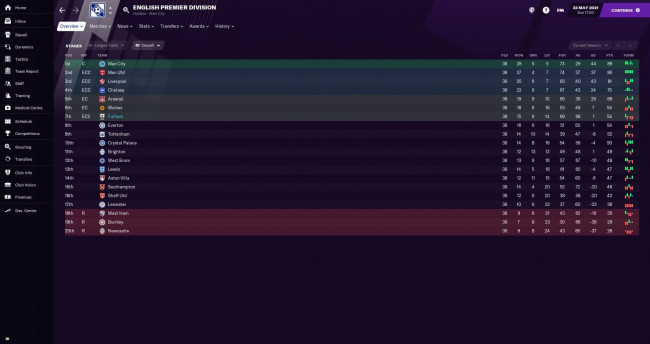 Delighted with the results, we were never in a relegation battle, in fact we never out of the top 10 at any point in the season.

A neutral goal difference reflects the fact we were competitive in every game even managing to beat Liverpool & Man Utd.

We created the most clear cut chances in the division, the need to improve striking options is obvious.

Also obvious is the fact that the tactic has been able to bridge the attribute deficit between our team and those teams with better players (just about everyone else).

Ok, we’ve tried the worst team, how about the best?

Although top teams tend to favour a more possession based approach, I can’t help but think Liverpool are well suited for this tactic. With Salah & Mane being archetypes for the forwards we need and 2 great wingbacks. However, they don’t really have enough centre backs to operate with 3 at the back, but we’ll manage our way through this (using Henderson as it turns out). 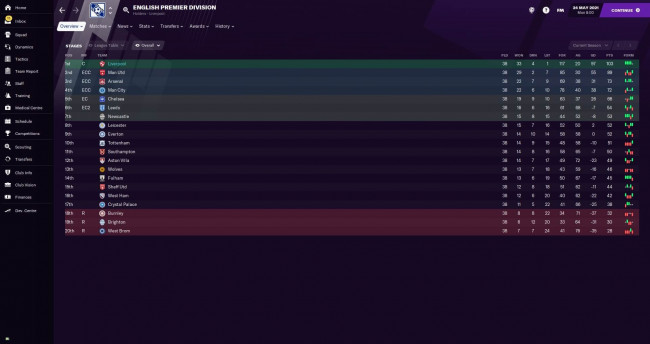 A quite brilliant season for Liverpool, just the one defeat, the usual Mourinho smash & grab. Only dropped 9 points all season, scored loads of goals and defensive record was excellent as well.

I felt I had to work for results February/March as injuries mounted and players got knackered, the football wasn’t always sparkling at this point and bottles needed to be thrown at half time on a few occasions but that did the trick.

Signing 2 centre backs at the start of the season would solve many of these issues, I had to play Henderson at Centre Back for all of the 2nd half of the season.

But we have overperformed with both weakest & strongest teams in the league which should mean it works with all team at all levels.

Explaining how the tactic is supposed to function is best done by looking at the player roles and what is required to perform most effectively in each position.
These are not set in stone, if you have a great player who doesn’t fit the brief, its fine, just use them (Mitrovic was fine despite moderate pace), as I do Academy Challenges I have to ‘make do’ with what I get, but in an ideal world where I could Min/Max I would work to these templates for optimal results.

Pressing Forward
Aside from an initial press as the opposing Goal Keeper distributes the ball, our 2 Strikers position themselves on the shoulder of the last defender most of the time, the exception being should the ball come to an opponent within ‘pressing’ range at which point they will break formation and put that player under pressure before returning to his station high up the pitch.

We are looking to have two ‘out balls’ as soon as we recover the ball, in a flash we can then turn defence into a 2 on 3, and often a 2 on 2 attacking situation. A fairly high tempo and generous passing range encourage this pattern of play.

Outside of Counter Attacks, during standard attacking build up play, we are looking to overload central areas with Attacking & Central Midfielders supplemented by Inverted Wingbacks.

We are favouring through balls over crossing.

Look for;
Acceleration
Off the Ball
Dribbling
Technique
Finishing

If you get the right player here he will win a lot of ball and either have an easy pass to the forwards or have acres of space to run into. The perfect candidate will have a rare combination of attributes with a blend of both attacking and defensive qualities.

Retraining a deep lying playmaker to the AMC position can be a great option here.

Many counter attacks will go through this player, during sustained possession he will often break centrally beyond the Strikers to finish or assist.

There are 2 ‘flavours’ of players here, Elite Teams should look for a combination of both.

Central Midfielder
We are looking for good athletes here who can both support attacks whilst taking on a large amount of defensive responsibility. Whilst nominally we have a 2 man midfield, in reality our AMC drops in to make 3, and we have the security of 3 centre backs behind them so they are not exposed.

Whilst we favour a big athlete (Mourinho style) on the basis a good ‘big un’ beats a good ‘little un’, having someone here with good vision and passing will reap dividends so prioritise this over physicality if you can’t get both. Doing this ensures a steady flow of quality through balls and clear cut chances for your forwards.

Inverted Wingback
The addition of these roles are a god send to someone like me who likes to focus play through the middle and create central overloads, having said that, they do mix up play often staying fairly wide, especially if you don’t play with inverted feet. However, when play is building on one flank, the opposing Wingback will come narrow and can attack the far post for goals and assists.

This role requires a blend of both attacking and defensive qualities underpinned by a good engine.

Centre Backs
Employing 3 central defenders makes us very strong at set pieces, the right centre back in particular will be on the end of a lot of set pieces, I’d put your best Header in this spot.

Beyond that, nothing out of the ordinary are required, just get the best defenders you can. Good headers are a must, pace is always welcome, a good passer is the icing on the cake.

Goal Keeper
Again, no surprises here. We can go for traditional shot stoppers, world class distribution is not required.
Just ensure they are good at one on one’s and are good in the air.
Aerial Ability
One on One’s
Reflexes
Handling

Its Attacking not Counter Attacking?

Counter attacking, as a mentality has been removed from the game. A counter attack triggers on any mentality when certain conditions are met, for example, when there is only X number of defenders between the ball and our opponents goal. Outside of that, the Attacking mentality encourages more direct passing from the back and a higher tempo in more general attacking play, mimicking the counter attacking style.

You have a high line, I thought counter attacking required a low block?

The high line is employed when we are in possession and attacking ourselves. When out of possession our defensive line drops as appropriate with play. You will see plenty of the ‘low block’, but we are happy to win the ball anywhere.

Why so many attack duties, surely its unbalanced?

We have at least 8 outfield players behind the ball when defending and an explicit reason for keeping 2 players up the pitch. If the Attacking Midfielder on Attack duty did not get back behind the ball, I would have dropped him down to Support duty, but he does defend diligently even on Attack duty which means he is very aggressive in moving forward during transition which is what we want. The same reasoning applies to the Wingbacks. We have players on attack duty as they still fulfill their defensive responsibilities well but are quick to transition, exactly what we want.
I would employ more support duties on a possession based system.

My AMC doesn’t seem to assist/score much?

If you look at goals/assists you should be approaching 10 for both in a season, this a good return for a midfielder. If you follow him carefully during matches you will see his true value, pressing, breaking up play and initiating attacks, things raw statistics do not always pick up.