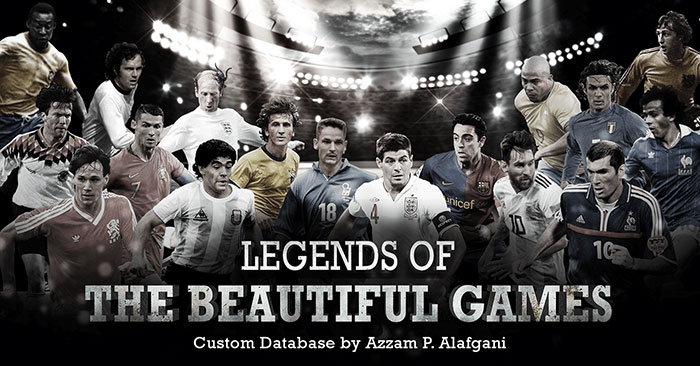 This database conclude the set of the best ever in the entire history of the beautiful game. With this extra data-set the most legendary players and managers from football history will appear in your Football Manager game.

The best players in each positional category will be picked with good proportion from each era/decades to get into this FM 2021 custom database.

Contract and International Data
There is no Maradona at Napoli or van Basten at AC Milan, where the legends play in their famous playing club. All players will play at their real playing club history based on their age when the game started. So, Maradona will play at Argentinos Jrs and van Basten at Ajax, because they were there at the age of 20; Ronaldo will play at PSV and Zidane will play at AS Cannes, because they were there at the age of 19.
This applies also to legendary managers.
Some players that played in small reputation club and/or lower league will have a set a future transfer to their next club with random transfer fee. (e.g Zidane will join Bordeaux in 2021)

Career Plans and Playing/Non Playing History
Most players and managers have a set career plans to play/manage their next club. All of them have a set playing/non playing history. This is very important to the club dynamics because make them more influential players.
In addition, players who play abroad will have an additional languages that are used in their based nation.

Facepack
Thanks to the author of DF11 faces that allow me to share this, all player/managers are equipped with a unique DF11style facepack.
You can download it exclusively HERE
Choose 21.4.0 Database to make this works.