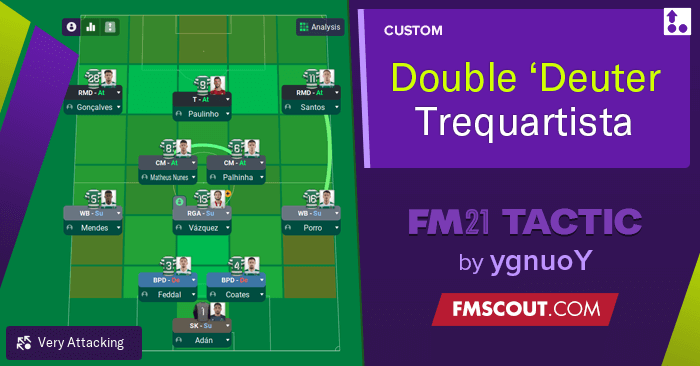 Hi all, this is my first ever post on here, I'm usually terrible at making tactics, but I may have just stumbled upon something. Feel free to read my thought process below, it explains changes I made before settling on the current set up just before Christmas in my first season. I'm hoping that the post-Christmas slump doesn't affect things too much, but we shall wait and see. Obviously in order to use this long-term you will need to tinker instructions/player roles to a) suit your players and b) not let the AI get too accustomed to your team (I'm glad the game has changed this year so you can't make god tactics). I want to stress that this is not a plug and play tactic - it needs players with good vision, technique, passing, off the ball, composure, finishing, stamina etc.

First off, the tactic needed a cool name. DDT - Double 'Deuter Trequartisa, also a badass wrestling move. The tactic even is even comprised of two WW's, a subtle nod for the wrestling fans out there. Moving on;

I opted to use Sporting CP, as they haven't won the Portuguese Title since 2002 (I know, I couldn't believe it either!), Edit: Just after writing this on the very same day, Sporting won the Portuguese Title. They have just sold their best player (Bruno), yet are still in financial trouble. They also have an abundance of young talent (Nuno Mendes, Pedro Goncalves, Goncalo Inacio Eduardo Quaresma to name but a few), great training and youth facilities and youth recruitment making them an attractive long-term proposition. Plus Portugal is an interesting save, as there isn't much money and a far greater emphasis on bringing through youth players. Also having Benfica and Porto in the same league will ensure it's always challenging, which is just what we want. I want to also try it with Ajax, although they are pretty short in midfield, so signings may be required. Plus, Haller might not be the best Trequartista, maybe a Deep Lying Forward could be the answer? I think you'll struggle to make this tactic work with anything other than a top 4 team in Europe's top 6/7 leagues. Anyway, back to Lisbon.

The plan was to create a tactic where central midfielders scored the majority of the goals, because I'm so used to just having Advanced Forwards scoring them all, and lets be honest, that's a bit dull innit? (Americans, eat your heart out) Also because I've found most midfield roles utterly useless this year (I'm looking at you Deep Lying Playmaker and Advanced Playmaker!). I also wanted to use some funky player roles, like the Regista (who doesn't want a Pirlo launching passes to all corners of the pitch?!), the Raumdeuter (fun fact - this means "Space Investigator" in German and is often renowed as Thomas Muller's role) and the Trequartista (I've never had any success with one of these before, and it just sounded cool. I think Roberto Baggio was deployed as one of these back in the 90s?).

Initially the shape started out as a 2-5-3, with Segundo Volante's either side of the Regista, but that didn't quite work out, my players were stepping on eachother's toes too much, and invading one another's spaces, so I moved the Segundo Volante's up to a Central Midfielder on Attack, with instructions to get forward, move into the channels and shoot more. As you will see, the shape is now at a 2-3-2-3 with the Regista having plenty of space to pick passes, thread through balls to the Raumdeuters, or even a longshot from the edge of the box. You will notice the Regista (Joao Mario/Braganca/Vasquez) camped on the edge of the box, moving the ball from side to side until an opening appears for the killer ball/shooting opportunity. Fear not - we don't usually struggle to break teams down too much, a fair few goals come from lethal counter attacks or switched passes leading to one on ones with the keeper. (Regista means Director in Italian, and that's exactly what we want him doing, directing the game). The Cenral Midfielders bomb forwards when we have the ball, which we have plenty of, but not too much (I'm currently halfway through the season with 52%. 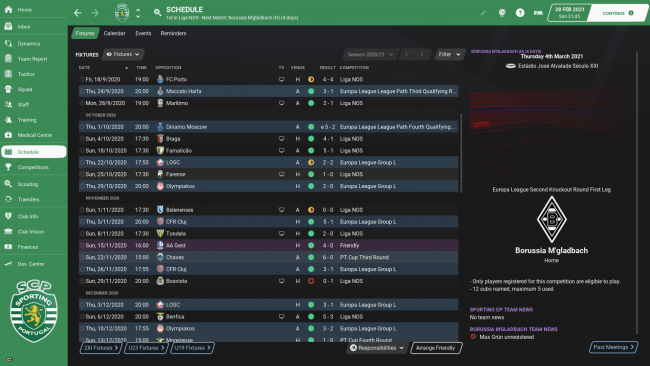 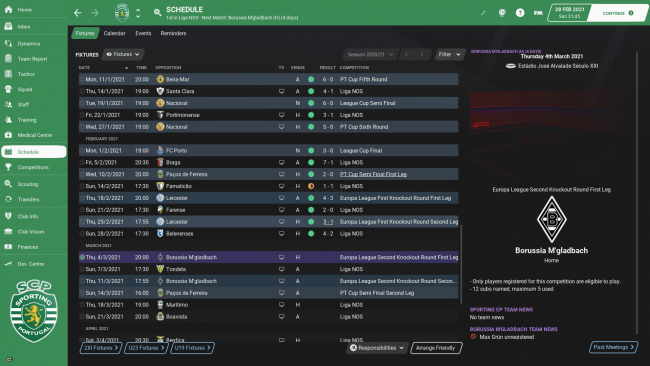 As you will see, some good results had along the course of the season so far. The Europa League form has been brilliant, although Leicester were tough customers. Damn Jamie Vardy. And any long time FM players will only know the dangers of Youri Tielemans all too well. But we managed to ease past them in the end.

A convincing 3-0 dismantling of FC Porto in the League Cup final was a particularly satisfying result. Match statistics below: 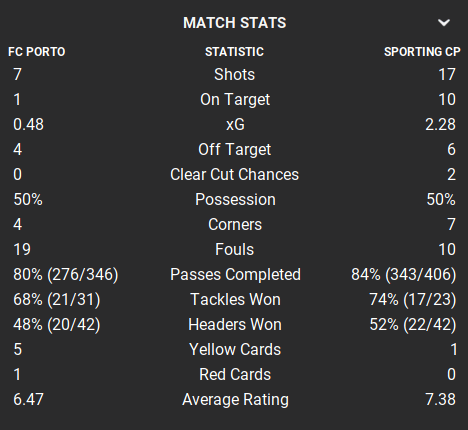 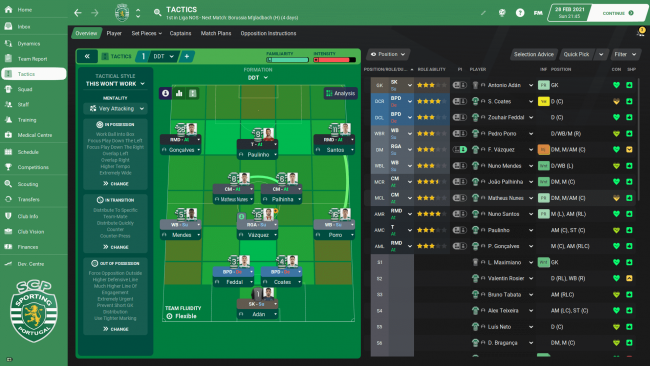 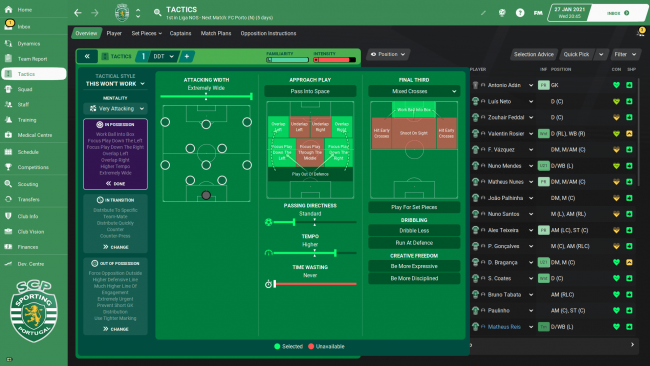 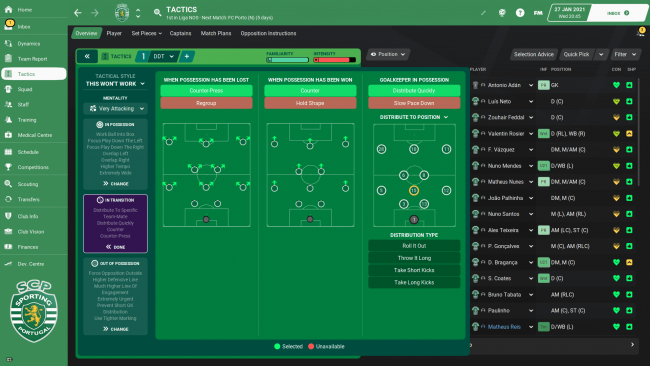 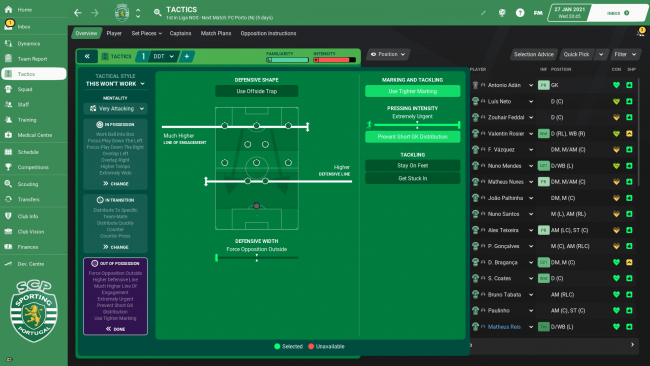 I wanted it to be very attacking, because who the hell doesn't want to play attacking football?! Plus, one of the Club Vision objectives was to play Attacking Football, so that's an instant tick. We play with extreme width to allow the wing backs (I just wanted to use Nuno Mendes for a while before Chelsea inevitably pinch him off me, like with every save ever in FM21. I also decided to make Pedro Porro's loan permanent for £7.75m, which was an agreed future fee in his loan contract, absolute bargain imo) to get forward as much as possible and hit crosses into the Raumdeuters/Central Midfielders, or to find cutback passes. These guys don't tend to get loads of assists, but chip in here and there. Usually an assist every 3 or 4 games. I tried using Complete Wing Backs initially, but just found the regular Wing Back to be better (I'm not an expert at this, let me off.) Focusing play down both sides with overlaps on both sides, pretty self explanatory stuff. Initially I had the "hit early crosses" option, but I found that the crosses weren't really connecting, so changed it to "work ball into the box" and found my Raumdeuters scoring/assisting more and my Trequartisa (Paulinho/Texeira) really making big contributions. Current goal/assist contributions in the squad:

As you will see, the goals and assists are nicely spread out, reiterating my point about not having a single player score all the goals.
As mentioned before, the Central Midfielders (Palhinha/Matheus Nunes/Bataglia/Jones on loan from Liverpool) really do work in this tactic, getting into the box for crosses and often running past the Trequartisa for 1 on 1's inside the penalty area (I'd recommend training the "gets into opposition area" and "gets forward whenever possible" traits. The Raumdeuters drift around in the spaces between the opposition's midfield and defence and often ghost into the box for tap ins from crosses, or get onto the end of through balls from the Trequartisa/Regista. Nuno Santos is absolutely killing it in this position so far, notching up an impressive 18 goals and 11 assists in 28 appearances in all comps. As previously mentioned, vision, passing and technique are very important for the forward players. "tries killer balls often" is a great trait for these guys to have too.

We've gone for a higher defensive line (we only have 2 centre backs, so nothing too crazy) and a higher line of engagement. I'm not going to lie to you and explain like I know what these things really do in-game, but it seems to be working, so if it ain't broke.. I decided on 2 ball playing defenders, nothing too crazy here, it's just what I had at the club. Regular central defenders should do the job, as the main distribution from the keeper is to the Regista anyway. However, having a defender who can sweep the ball out to the wing backs/spray a long ball to the Raumdeuters is always handy.
Obviously it's a counter pressing system with a counter attack once we get the ball back (just like every tactic ever!). I've opted to distribute the ball quickly to the Regista, we want to get him on the ball as much as possible (Franco Vazquez is a fantastic choice for this position, transfer listed at the start of the game, and in his last year of contract if you can wait, which is what I did, signed him in January for a cut-price fee after I terminated Joao Mario's loan). I think that's everything covered, a few things to note:

Depth: It goes without saying, but make sure you have at least 2 players per position (Sporting CP are in 4 competitions so fixture congestion can get a bit crazy. Loan signings are great for this, and it's a great opportunity to give your young players some minutes in the cup competitions/easier league fixtures).

Player traits: get some good player traits on your players (I touched upon this briefly above) they really help get the most out of the players, especially the Central Midfielders which is a pretty dull role.

Game management: obviously if you're a few goals up and the other team is knocking on the door, change it around a bit. I usually drop my mentality down to balanced or even cautious, change the pressing type to drop back etc. One game against Benfica I was really against the cosh late on, so dropped the wing backs down to full back position etc. As said previously, it's not plug and play.

Finally, if I have ripped off anyone's tactic I apologise, I just made this yesterday with zero research, so it's completely accidental if so. I hope you guys give this a go and have as much fun as I have! Please let me know how you get on, and feel free to play around with it. To clarify; I use no PI's (If a certain player is running riot I'll get my team to man mark him/go in hard on him). I also don't do anything for training, just let my assistant do it. Although I get rid of Match Practice (usually for Teamwork or Attacking Wings), as it will just injure your players. Feel free to ask any questions, I'll do my best to get back to you. Enjoy!