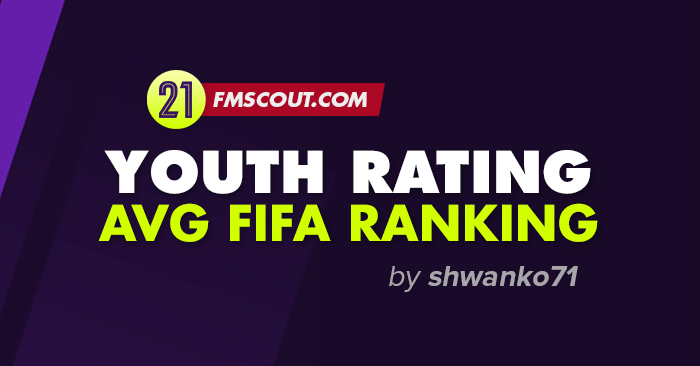 This is correcting all Youth rating for new gen players following an objective approach that uses FIFA ranking average over last 28 years to determinate how good each nation area producing quality players.

The 2 extreme end had been kept as set by SI, with Brazil having same 163 rating (as in default FM) while keeping other end kept low near what FM had set at the other end of spectrum, then we set countries within that spectrum using a correlation system.

Furthermore, popularity of football for many nations had been corrected, ex: Nigeria was set for "completely useless" ?!!!

After this patch, all nations like Germany, Argentina, France and Spain will have closer rating unlike the default FM where Germany was ahead all of them by 15 points when in reality their average ranking was 5th similar to Spain and Argentina. Same for Italy averaging 9th while in game is as good as those teams !! England was not far with at 10th place while in FM, the default rating put England behind Egypt and Mexico !! comn !! I know England are not top 5 but sure We are not below Mexico and Egypt ?!! that is what Fifa ranking is saying too .. our average was 10th in world , while Egypt was 37!! so how they are rated 138 in FM when England is 120 !! That is insane !!

to use this ranking: Just add the file below in folder at path below and load it when you start a new game.

Any advise or suggestions are welcomed.