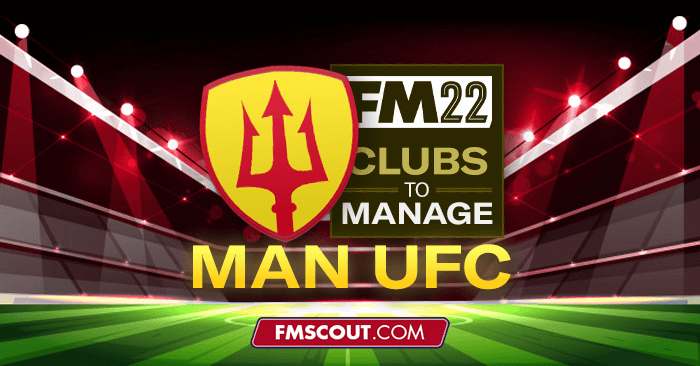 A bit about Manchester United

Man Utd or in FM22 Man UFC, yeah we know! One of the biggest teams in the country if not the world at least if you go by history – their trophy cabinet is only really rivalled by Liverpool in England, not so much in recent times but overall they are a massive club. It is probably fair to say most of the glory and the best known period of success is during the Premier League era but there have been other times and sides of success too. Winning the top division as early as 1908 to winning the league 3 times during the 50's with sporadic trophies in between they have generally been a team associated with success.

This escalated in earnest however during the reign of Sir Alex Ferguson whom deservedly would be in discussions as one of the greatest of all time. Leading the club to 13 Premier League titles, 2 Champion's League titles, 5 FA Cups and 4 League Cups and a whole host of Community Shields. Whilst trophies are massively important and of course boosts the club it is worth remembering not just that but his coaching abilities, Man Utd under Sir Alex always contained an academy graduate and not all were global or even national stars and he managed to get reasonably decent players to perform immensely – Ji-Sung Park, Phil Neville, John O'Shea, Darren Fletcher to name a few would always be remembered by Utd fans but would not be considered house hold names however for him were seen as pivotal in his teams in their own right whether it be for their hard work, versatility or because they could carry out his instructions in games to the letter.

It is simple historically one of the biggest teams around and financially the same.

So whilst they have been a largely successful team particularly through the 90's and 2000's the good times have virtually ceased since Sir Alex left the club with 4 permanent managers so far unable to follow in his footsteps and provide a consistent level of success and ability to challenge those who they would consider rivals.

First through the door was David Moyes, allegedly hand picked by Sir Alex himself to be his replacement an initial poor transfer window which saw Man Utd linked with many future stars but failing to sign any of them and ending up with Marouane Fellaini, whom wasn't seen as an exciting global start did not set his reign to the best of starts. It was always going to be a difficult season considering the legacy that Sir Alex had left behind, however Moyes was not even given a full season and was dismissed after 10 months. Potentially having the last laugh considering what is currently happening with Man U and how well his West Ham side are doing but there will always be a case of what if, Sir Alex was given time and turned Utd into an absolute force, 10 months was never enough time to truly impact the club.

Next was Louis Van Gaal, he came in with a reputation of getting things done and being a strong head coach, Utd believe he would carve Utd back into a title winning team but this was not accurate, he instilled an incredibly defensive style and the side would often be jeered at games where fans would chant 'Attack, Attack, Attack'. His pragmatic style drew immense criticism from the fans and media and whilst he did win the FA Cup with them he was dismissed after two years for failing to come close to what was expected.

Special or Happy one Jose Mourinho was next at the helm despite managing rivals Chelsea he was seen as the answer but Jose has a familiar job history pattern where there is improvement but usually things turn sour – this did not deter the board and they financed a huge signing of Paul Pogba for £90 Million to bolster Jose's Utd charge, the football did improve however not much better – he did lead them to three trophies winning the Europa League and League Cup and Community Shield, they followed this up with a 2nd place finish coming runners up to Man City in 17/18 which Mourinho claimed was a great achievement, considering Man City won with 100 points he may have had a valid claim. Sadly for Utd and Jose things turned as normal in the third season, he continually attacked players in press conferences and interviews which was viewed negatively both inside and outside of the club. Possibly he had points but airing them in the way that he did left the squad performing terribly and he was dismissed before the season's end in the 18/19 season.

Ole's at the wheel

I do apologise but it seems to be the phrase used whether Man U do well or whether they do badly and he has been intensely scrutinised ever since his surprise appointment after Mourinho left. He was brought in initially reported as a caretaker to boost the squad and get them to the end of the season, there were several very positive results such as a Champion's League revival against PSG which boosted the mood amongst fans, the positivity was so strong he was given the manager's job full time.

Since then he had worked to restore the 'culture' back to Man Utd of positivity and take them back to the top of the pyramid, getting big scalps against rivals were seen as positive steps though Utd always seemed to play at their best when they were against the ropes and dropped the ball against smaller sides. Still the board have backed him seeing the club improve with 3rd and 2nd place finishes in the league and the final of the Europa league though they lost.

This season Ole was backed heavily again with the major signings of much sought after Jadon Sanco from Dortmund, Raphael Varane from Real Madrid and Cristiano Ronaldo returning to the club from Juventus. To say that there was optimism by the fans and media before the season had started would be an understatement. A real statement of intent for sure however the wave of positivity hasn't seem to catch on as expected. Man U find themselves in 8th place after 12 games already with 5 defeats – whilst on paper it doesn't look like they are far behind performance wise they have been fairly alarming. The manner of the results when they have not taken 3 points suggest major flaws and defensively they are bottom or nearly in significant defensive areas. 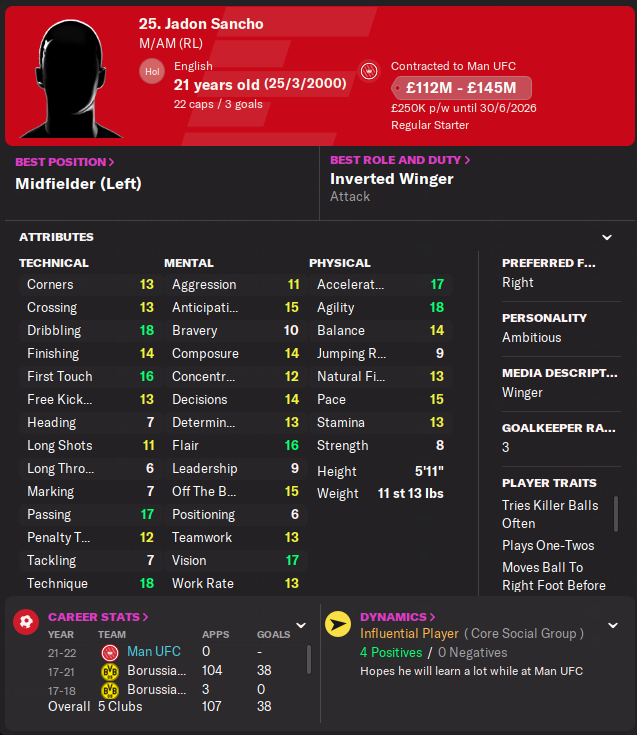 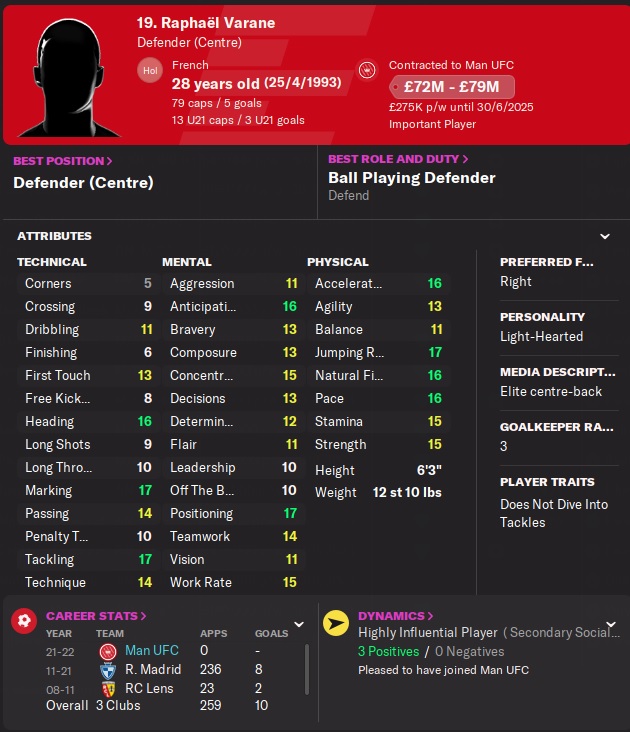 Man U now find themselves without a manager after dismissing Ole the day after their last defeat against Watford and it is an extremely poor situation for the club to find itself in again particularly given the expectations at the start of the season. Whether rightly or wrongly Man U have not planned for this and do not appear to have a clear idea of where exactly to go next – Pochettino and Brendan Rodgers are being heavily linked though it is also reported Man U are prepared to use an interim until they sort things out, there is still 6 months plus of the season remaining and so much can be salvaged – a permanent manager who will be backed correctly seems to be the best solution but ever since Sir Alex Ferguson left there does not seem to be evidence that the structure behind the scenes is run well enough leaving fans baffled whilst the club is in limbo. The club should take note of their biggest rivals and how they operate if they wish to remain as one of the biggest sides. There are several clubs which prove that size does not matter if not run correctly and things can go heavily wayward.

So Why Manage Man Utd?

The return of one certain CR7 Cristiano Ronaldo himself, an absolute dream at least in principle for all Man U fans though unfortunately for the club it has not completely inspired Utd to get to the next level and truly look convincing in their challenge for silverware. It already looks like he is a behemoth on FM22 so can you fully utilise one of the world's best ever players and get him to fire United to more glory, it could be your personal mission to achieve ridiculous numbers with him and maybe even make it your aim to win him another Balon d'Or or two before he retires, I think he would be pivotal in winning Utd anything. 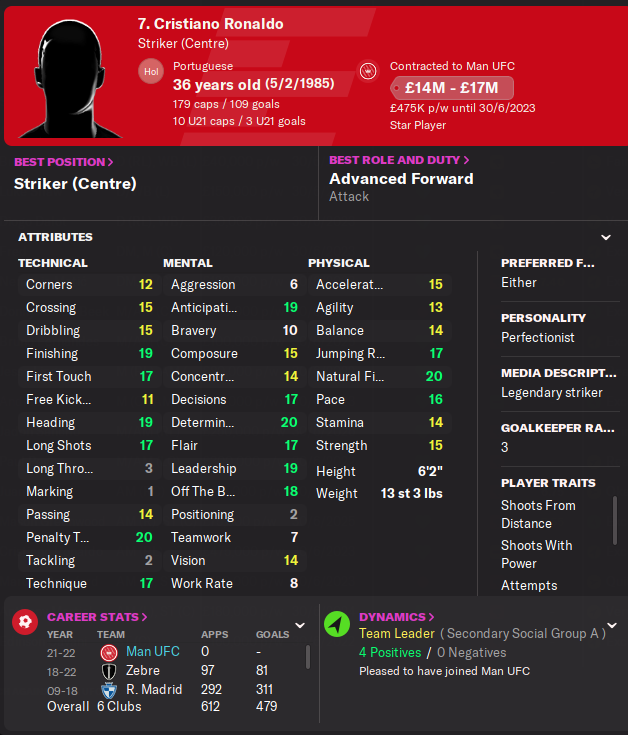 As already discussed Man U have not really been too inspiring or really making waves since Sir Alex left, only 4 since he left 8 seasons ago going into the ninth makes grim reading for the red side of Manchester whom have seen their neighbours City claim 13 in that time and have seen Liverpool close the gap on their top division titles to 1 and they are in a better position than Man U currently to challenge for this season's Premier League title.

For a club of Utd's stature this does seem like a very mismatched outlay though it cannot be said that they deserve more only that given their history fans would expect better – can you change their fortunes and bring the glory days back to the Theatre of Dreams or like Ole before his dismissal, will you steer them so close but only so far?

So the return of a legend and restoring a giant well yes that's all possible within FM22 but can you continue where the club does consider itself successful and that is with the academy.

Over 4000 games have been played where a graduate of the academy has been part of the squad a record which stretches back to 1937.

Chances have always been given to youth an Man Utd and no other club comes close in England to matching this number so will you be able to continue to do so and keep the production line running, can you get established graduates Marcus Rashford and Mason Greenwood to be the best they can be and bring others like them through to learn from them, they have already shown their brilliance and will keep improving who is next to follow in their footsteps? 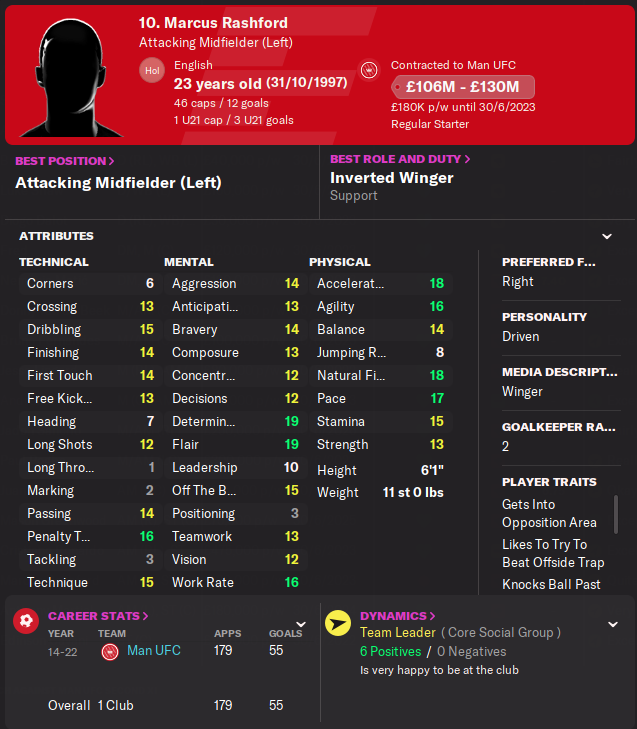 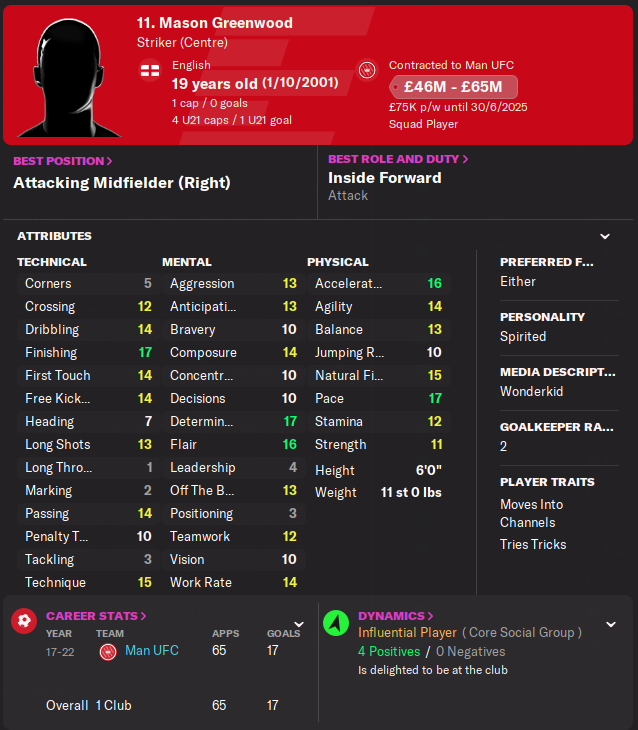