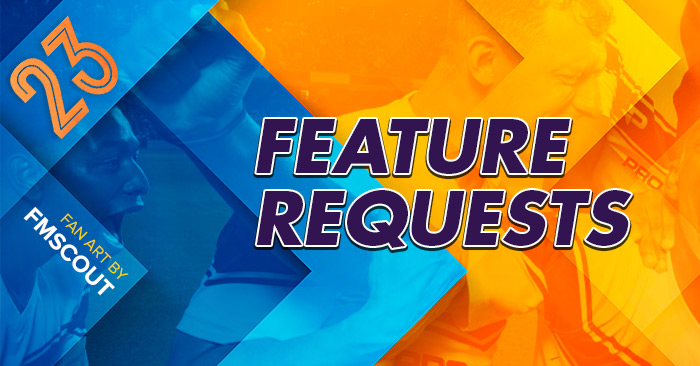 Hello everyone and welcome to the FM23 wishlist article.

Summer is closing in and like every year some of us start thinking of the next iteration of the FM series; in this case it's Football Manager 2023. New features we’d like to see, as well as improvements to various aspects of FM2022 that may have let us down.

While the urge to play FM is usually fading this time of the year, the upcoming World Cup should keep the interest in the game at high levels, and possibly provide the spark for some international management saves too.

Surely FM22 is not perfect, and the improvements it brought on the table seemed a bit underwhelming to a number of fans. But that's the point of this article really; to sum up all the interesting suggestions our community has expressed.

The people at Sports Interactive use the official forums to collect feature requests and evaluate them for inclusion on the next FM. The feature meetings usually start during January and are concluded during February.

Having said that, FM23 is already under development as you can understand. But of course the developers are always keen on checking out interesting suggestions they could integrate to the game.

In the past, they had voted for over 3,000 features to work on, and Miles Jacobson stated (more than once, if I remember correctly) that the annual goal is to add 1,000 features in every new version. Now that amount might be a bit exaggerated because even a change of a text string for a press conference is counted as a feature.

As always, we won't be having any official announcements regarding FM 2023 until September. This is pretty standard and goes like that every season.

FM23 is expected to arrive during the last quarter of the year, around late October or early November.

There are 3 ways for you to make your own feature requests:
We'll be updating this article regularly to include fresh feature requests, so make sure to check back often.

This is a massive community work and I’m very proud to present this wishlist of FM23 features here.

Jake looks at a number of improvements we'd like to see in the next instalment of Football Manager, ranging from small changes to feature overhauls!

Now let's get to the list of features YOU want to see!

More realistic portrayal of tactical systems and player roles, especially when trying a simple crossing for header approach. The match engine fails to perform what's expected, while attacking and passing tactics always seem to be overpowered.

More player instructions, as well as positional options in formation and set pieces, so you can set where you want players to be when the ball is in a certain area of the pitch.

Add a dugout camera angle. That was possible using an unofficial mod a few years ago (meaning the option existed in-game) but got disabled since.

Have an out of possession formation and not just instructions for that phase.

The ability to save opposition instructions could prove a time saver.

Be able to remonstrate with officials and interact with the other manager on the sideline.

More useful staff feedback during a match, so instead of "X isn't playing well today" to provide suggestions on how to help fix it.

Introduce a rating system for referees.

Goalkeeper ratings often seem unfair (to them) and could do with an adjustment.

A wider scope of media questions, and possibly the option to give unique responses on top of preset replies.

Stop players from coming to you to demand more first team action when you only rest them for a game or two because your medical team told you they need a rest.

Fix the poor reactions from players when you praise them for their recent form or international call-up. It makes no sense that doing something positive would backfire at you and cause problems out of the blue.

Get rid of players asking for new contracts every couple of months. That never happens in real life.

New staff roles for psychologists and dieticians to handle discussions about personal problems.

When team underperforms, fans may visit the training ground to talk to you and the team.

Speed up the time between matches by streamlining the process more or providing options to turn off pre-match news and other screens, in order to decrease the clicks and the time that passes after pressing continue.

An option to change kits at the beginning of each season. While that's not really something a real manager has a say for, it would increase the sense of control and the overall enjoyment for long-term saves.

When upgrading a stadium, show the stadium building process at all times, so you can graphically see the progress.

When holidaying let us know if important things are coming up (player registration, squad numbers selection, etc) and give the option of returning from holiday when there’s a deadline, or deferring until return.

Bring back a default light skin.

Add a screen with all-time stats per competition.

Option to save staff responsibilities, so you can quickly load them when changing club.

Make the instant result button part of the default skins.

Provide an option for a more streamlined experience, so you can play the game closer to the way FM Touch was like. That could probably mean automatically setting certain staff responsibilities and a couple of skin changes in show/hide fashion.

Using data from older CM/FM games, offer retro DLC in the current game. For example, be able to play the 2004/05 season using the FM05 database but on the newest FM version.

More realistic and adaptive sponsorships and tv revenue. If you start in a league outside the top 20 leagues and your club becomes one of the best in the world, while your league rises to the top 6 of leagues, you should get more money from tv rights and sponsors.

Have the option to clear loans and debt off quicker when there's money in the bank.

Bring back the club value option as detail.

Adjust ticket pricing to a more realistic scale based on the club's recent achievements and growth.

More realistic AI transfers, as that remains a massively frustrating aspect of the game after so many years. Not only in terms of the bids involved, but also how club DNA doesn't influence transfers as much as it should. This problem breaks up clubs and is especially pronounced when strong newgens appear.

Better player pricing depending on contract length. If player has 1 year left, team should consider selling for less then player had 2 or 3 or 4 year contract, not to lose for free.

Fix estimated value for own players, as it can't be going down during the season when the team is doing well and winning.

Partial payments are flawed/bugged. The AI will favor bids that involve instalments over direct up front bids, even if the amount is exactly what the team is asking for.

Streamline next day training to be more relevant for match day squad based on minutes played.

Option to tell your assistant to always put a match review in training for people who don’t always manage training themselves.

Option to streamline scout reports in the inbox by combining emails into a weekly scouting summary.

Nail the basics such as the match calendar to avoid fixture congestion when it comes to important games. You shouldn’t have most of your squad missing on international duty for big matches and finals like the Super Cup and Champions League final as that doesn’t happen in real life.

Option to request postponing matches in case of fixture congestion.

Make youth recruitment more interesting somehow, rather than dumping a bunch of players on a set date.

Make it clear (via staff recommendation) if it's better for a 15 year old with a 5-star potential to go on loan at a third division club rather than stay at your club's youth team with 5-star youth facilities.

Introduce official DLC packs for real fixtures and results, as well as player stats for the winter update.

Ability to add historical data in the pre-game editor. For example, add season stats of 21/22 to all competitions and cups and be able to set a proper start date to play new season 22/23.

Option to work as a manager for under 20/18/B squad only (not concurrently with the senior squad). While that'd likely be limited in terms of responsibilities, when we are able to climb into managing the senior squad later on, then it is considered an achievement. A recent example would be van Nistelrooy, who got promoted into PSV manager for the senior squad from the B squad.

Ability to enter a backstory; what is your history, your favorite club, if you have international caps, and so on. For example, you could become a club hero who might go back there one day, later on in that same save. That could improve immersion further.

Deeper relationships with your staff would be a nice touch, as that never seems to improve even if you move clubs and take them with you.

Have a better way of checking historical achievements by real managers and how you compare to them.

Possibility to manage infrastructure at more levels, but with an option to automate this for players who don't want to go into such detail.

Option to utilize your salary to organize events that can boost team cohesion.

Ability to hire an agent to increase your chances of landing manager jobs.

That sums up all interesting suggestions people posted in our community. I tried to organize everything into categories, but please keep in the mind the order is random.

If you spot any errors or you feel a suggestion should be removed from the list, feel free to point that out.

Are you still playing FM22 with passion or has it gotten stale for you by now?
How many long save-games have you had with FM22?
Are you happy with the game?

Leave a comment to let us know, alongside your FM2023 feature requests of course.

62 comments have been posted so far.