Search
FM Scout is the only community you can talk Football Manager in real time. Here are 10 reasons to join!
Home › Scouting › FM 2016 Best Players ↓ 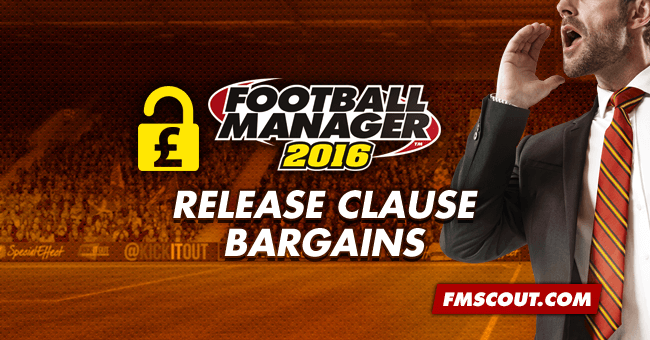 Welcome to the list of Football Manager 2016 release clause bargains by FMSCOUT.com.

This list includes quality player with reasonable release fee in Football Manager 2016. You will notice that most players belong to Spanish clubs because setting a minimum fee release clause is required to be present in contracts there. This is part of our FM 2016 top bargains article series.

What are release clause bargains?

They are good players with a fair release clause fee that it's recommended to activate. Once you offer the release clause fee, the club where the player belongs is forced to accept your bid and let you negotiate a contract with the player. Some players on my list don't have a bargain release fee if you only consider their quality in the first season, but it could be reasonable 1-2 seasons later if it stays the same.

It's a personal recommendation system for your convenience. I'm using a 1-100 scale based on English divisions.

Important: For this particular list, I'm experimenting with a different ranking approach that's based on a player's best role instead of his overall quality.

I think you missed some players! Oh, and that player shouldn't be here!

I'm counting on your feedback to improve this list, so I encourage you to post your suggestions in the comments section below. Thanks!