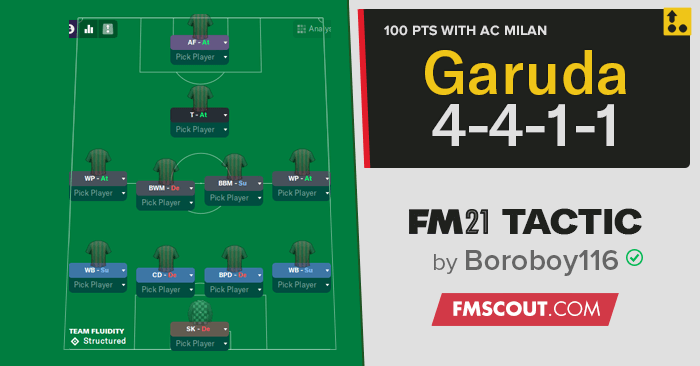 
The 4-4-1-1 formation is a variation of the 4-4-2, although both formations are rarely used out and out in modern football, many teams shapes will mirror these shapes in the defensive phase. The 4-4-1-1 is a well-balanced system that allows for defensive stability with the two banks of 4, in attack many styles can prosper from direct counters to a more possession-based game.

Rather than having two out and out strikers like the 4-4-2 the 4-4-1-1 drops one striker into a centre forward position which is usually occupied by a more creative player think of players like Cantona, Bergkamp and Baggio etc. This creates problems for opponents as they either have to deploy a midfielder to occupy the centre forward creating space for midfielders or a defender will need to track the CF which creates gaps in the opposition’s defence

The idea behind the Garuda tactic is to play a high tempo possession style focusing on dominating the central area of the pitch. The creative players operate on the wing as playmakers, they will drift inside forcing opponents to track them inside or risk being overwhelmed centrally. This then allows the wingbacks to exploit the space left in the wide areas.

The central pair are the engine room of the system, covering the ground to win the ball back quickly before giving it to the creative trio. The left-sided central midfielder is more reversed and he sits deeper to almost form the base of a diamond, whilst the box to box midfielder supports both phases of play with energetic and dynamic running.

The number 10 has a free role, they are tasked with finding pockets of space and making things happen. They are not the teams’ primary source of goals but they will chip in with plenty of goals and assists. He is a crucial link between the midfield and striker who looks to play on the shoulder of the last defender. 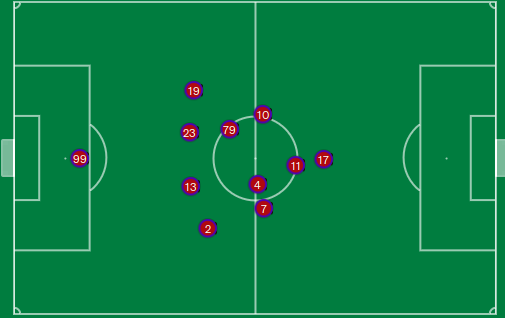 Check the video below for a detailed analysis.