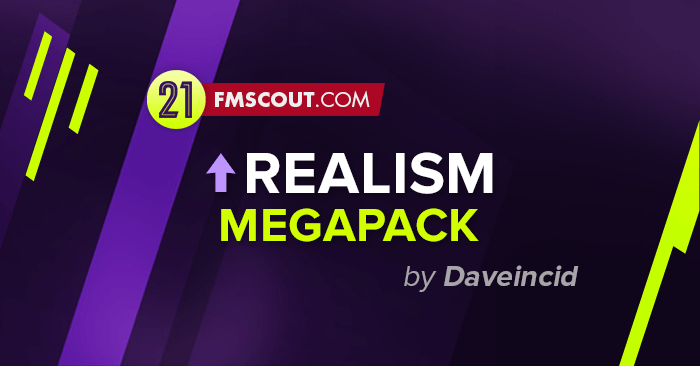 This megapack improves several values for over 220 Nations in-game to increase realism in FM 2021 to a whole new level!
It was fulltime-project over several months and it will remain an ongoing project.
All files are made with my own created db to ensure consistency in the changes.

Check out the latest YT-Video about the changes of October's update!


If you want to know how the game looks like 20 years later, watch the following video.

If you have used my previous versions please remove all the files from the editor-data-folder before installing the Update.

Read the READ ME document.

Do not use other mods which may conflict with my megapack at the same time. This includes files which changes:
All files are tested over 5-years in-game at minimum to ensure there aren't game-breaking bugs.

Compatibility with other databases

In general it is compatible with all league-files, transfer-updates, all graphical mods etc.

I receive a lot of questions if my files work with X or Y. I really do not have the resources to answer these questions. Such questions won't be answered. If the general information above isn't enough for you, then I warmly welcome you to join my Patreon. There is a list of files I personally recommend and which are compatible.

I work close together with DaveTheEditor with his "Around the Globe - Megapack". I highly recommend it, as both megapacks are coordinated with each other. Of course both Megapack also work independently too.

What does each file do?


The ratings are based on a huge database of personal research about all Nations, which includes but not limited to:

The combination of these changes will lead to:

This file brings a lot of dynamic in a more static FM-World by default.

The shown market values are not directly linked to what is getting paid for a player or how good he is. This is also the case in default, but more tweaked in my file.
Wonderkids without first-team-match-experience have usually a really low market-value, due they haven't shown their talent under senior football conditions yet, like IRL.
The value also decreases when the player is running out of contract.
Once they played a couple of games and achieved success in U-National-Teams their value can rise extremely. Low market values doesn't mean that you will get the players for this price or even close. Their shown value also changes as soon as there is a transfer-fee paid for them.

I have made adjustments to current values for 123 currencies. The biggest impact you will notice is in Venezuela.
This file will replicate the financial situation of all Nations more accurate to their current situation IRL.

This file lowers the gap slightly between the Top-Nations and all the others in Europe.
It also boosts Top-Nations outside of Europe slightly and should increase the competition globally.

The problem I see in Football Manager is, that it's always clear that all money from a transfer goes to the Club, the Player and his Agent. By default, when a Club is getting 90m for a player, the Club will get 90m. I think it's fair to say that this is sometimes not in line with the situation in reality. In some Nations the problem is bigger as in others.

The point is, that some Nations are well represented financially, so they are stable by default. Due to legal issues I won't say what the main problem is, but I am sure you guys know what I mean

I tweaked v1.1 to be able to remove the finances file from my previous version completely.
v1.3 contains smaller tweaks.


So how do I stopped the constantly gain of money?
As already Benjamin Franklin said: «nothing is certain, except death and taxes«.
With this file all Nations are getting taxed by a certain percentage on their transfer-income immediately.

How should you interpret this tax in the game?
If a player from Club A moves to Club B for 50m, and Nation A has a transfer-tax-rate of 30%, they will immediately pay 15m of taxes as soon the player moved to Club B.
So the transfer-fee is 50m, but the selling Club only gets 35. This way I was able to avoid that Nations who buy cheap and sell high will be represented badly in the future, because these teams are going to pay extremely high transfer-fees and salaries which they would never do in reality, not even close.

To get a better idea about what the taxes stand for:
I know it's kind of a controversial interpretation, but this way I was able to balance so many things in FM much better, and it will be as effective in short as in long-term-games.

There will be still some weird transfers without any influence on my side. This is mostly down to a new takeover of a Club. Sometimes the new Owner pays so much money for a player as a promise for his election-campaign.

This file gives you a more accurate behaviour of transfers. Most Nations are linked together in some way.

An example for Africa:

The best players from Malawi are getting poached by Zambia, due it's a better league and geographically close. If they are overperforming in Zambia they might get transferred directly to Europe. But often they need to take a further step, so they get poached by DR Congo.
This league is again stronger and more in the focus of Europe and the biggest Nations of Africa. So they might move to Tunisia, Egypt, South Africa, Morocco or Algeria.
This system is done for all 227 Nations!


v2.3 Smaller tweaks for Japan and Malaysia to force them buying more Brazilians/South-Americans

I researched Clubs which have a strong affinity for a specific nationality of players in the past and present. This is now a criteria in Visions of the Club.
So these Clubs should buy more players from these Nations. It will be in most cases a criteria of your board to follow these transfer preferences. It's part of the clubs philosophy.

v1.3 also has some edits of Director of Football to further improve the behaviour in transfers of these Teams. I removed RB-Salzburg, because it causes problems in combination with DaveTheEditor's megapack.


Following teams have been edited:

Ticket-Prices are a really tough task, because the game generates ticket-prices as soon as you set value too low in the editor, even if the value would be correct for a specific Club. It makes it impossible to set the correct values. The main goal of this fix is to avoid way too high ticket prices. There is also a big chaos as soon as a Club get's relegated or promoted.

In some cases a second division team has the highest ticket prices after promotion. This is also the case in default version. It happens less with my files but it still occurs.

I made corrections for 95 Nations for "years to gain nationality". It was quite difficult to get it right because sources sometimes vary. There are some interesting years included. Might be worth scrolling through the Nations to find out

This file was made by DaveTheEditor! Thank you for your help:)
It adds 24 agreements between Nations. You can find this information in the Nation-tab-overview!

This file adds 300+ missing Derbies from Clubs and Nations in over 50 Nations.

There are Derbies included like:
There have been over 1,000 reputation-adjustments as well to ensure a logical worldwide distribution.

This file fixes literally all missing and illogical award-reputations in all Nations and in all international competitions as well according to my own research-database.

This is very important when it comes to a players transfer-behaviour, his loyalty, his career-path, his market value, the reputation of a Club and much more!

The best player in a weak League will now be much quicker unhappy if he wins awards and he thinks he is too good for the Club. Convincing these players to stay is much more difficult! On the other side it's a chance for a Club to grow their reputation if they are able to keep these players. It's very tricky but it adds so much more dynamic!

Most important awards created for over 200 Nations worldwide, like:
All these awards are of course in line with all existing reputation-values to fit perfectly into the whole system!

Increase of RB Salzburg
RB Salzburg is getting year to year a small reputation-boost when they get awarded as the best team in Austria. 10 years later they are close to be the biggest Club in the world without much success. This is now fixed with this file.

This change should balance the increase of a Manager's (AI und User) reputation worldwide. So you shouldn't be poached by a very big Club too soon (in some cases).

A small percentage of new awards won't show as a text (empty field only). I tried to fix it but no chance at all. But the most important thing is that the reputation works!

This file was re-done from scratch. The goal was to get a better representation of short-/mid-/long-term-injuries as well as some new injuries to bring a bit more of "social interaction" into Football Manager

You will get more injuries, more variety and more frustration

The injuries-stats were compared with real-data with several simulation-tests in FM over 5 years.

This file adds a lot of missing data for almost 700 1st and 2nd-Division-Clubs in 150 Nations worldwide:

Year founded sounds easy, but there are sometimes 2 or even 3 dates available due re-founding or club-fusions. I took the date which seems the best option IMO.

This file includes the sugar-daddy-fix file but it has a lot of more features:

This file took me roughly 2 months to complete. It's just insane^^

What's the effect of the changes?


A lot of African Nations have set French 100% as their main-language. Sometimes not even 10% where capable of speaking French. With adding new languages, this is fixed for almost all Nations. In general I have only added official languages which are recognized and do have a minimum of 1% of it's population.
There are also regional languages added like Basque or Catalan or a lot of different Chinese languages. All languages have been edited as realistic as possible with the existing language family, language group and language sub-group in the editor.

What's the effect of the changes?
I for myself speak some Spanish, but I have no relation to any Spanish speaking Nation. All Data is from official sources like wikipedia etc.

This file contains small Reputation-Adjustments for some Brazilian, Argentinian and Mexican Teams to improve balancing in Long-Term-Saves.

HOW TO INSTALL "Increase-Realism Megapack" in FM21

If you have any questions, do not hesitate to ask me! If you find any mistakes, please send me a PM!

If you really read the whole text until this point, you have my deepest respect

182 comments have been posted so far.