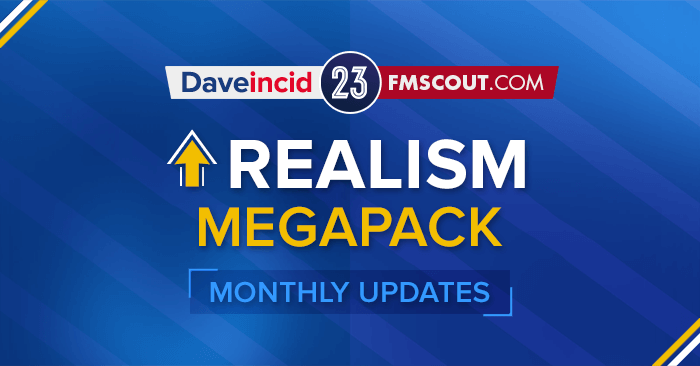 I'm very happy to announce my next update for FM23. My "Increase Realism"-Megapack JANUARY Update!
There will be an update every month, The same system as last year (ALPHA, BETA, Early-Access on Patreon and then public release).

READ ME BEFORE INSTALLING

This file changes the "youth ratings", the "importance of football" and the "development status" of all countries. The main purpose of the changes is to provide a more realistic balance of power after more than 10 years. Nations have different development potential based on over 15 different criteria.

This file improves the balance of the current ability of newgens when they are created. In some cases/nations it was generally too high and in others too weak. The adjustments to the training facilities then ensure that the subsequent development speed is realistic.

The influence of this file is very important. It improves the reputation behavior especially of younger players. This is too low in the standard game and has a significant positive impact on the age problem (national teams and clubs become too old after 6+ years). There may be some further adjustments in future updates to further improve the age-bug in some Nations. Additionally, it brings a whole new game experience:

Salaries
Salaries are based much more on real data available worldwide. A player from Cameroon no longer earns 500,000 euros, but perhaps 30,000 euros per year.

World-class players earn much more, up to 30-40 million euros gross per year. By default, the end of the line for salaries is in the 20 million euro range.

Market values
Market values have been adjusted globally to more realistically represent the effective transfer fees paid in nation XY. The market values in larger nations like England are sometimes way too high. (Many players in the range 100-200€m). This was also lowered. The higher reputation of younger players will boost those values a bit again.

IMPORTANT
Some very high "transfer values" are still displayed. These simply tell you that player XY is not for sale. My changes aim to ensure that the transfer fees actually paid are realistic.

Sponsors
The sponsor values have been adjusted worldwide to better balance the finances. In addition, I have calculated individual maximum values for each nation. This is to improve realism, especially in smaller nations, where they grow together with the nation in case of great success. Highly recommended for a "Build a Nation"-save.

This file lowers the natural fitness of all players slightly as well as a few individual ones a bit more, as they were able to maintain their ability (CA) for too long in long-term tests. These changes improve the general age structure after 8-10 years in club and national team, especially in the bigger nations.

This file increases the tendency of all managers to give more playing time to the younger players as well as to apply the new substitution rule ( permanently 5 substitutions) more consistently.

I have researched all nations on transfermarkt.com which have a preference for players with a certain nationality and adjusted them accordingly. Over 200 nations have been edited!

Not only the nationalities have been adjusted, but also the age preferences. There are certain nations that clearly stand out as "training leagues" based on various data. (Very high percentage of players under the age of 24). For example, Denmark, Austria, Belgium, Switzerland, Croatia or even obscure Nations like Kyrgystan

The injury file has been “reactivated” and should primarily lower the high CA (Current Ability) of older players an boost the rotation, which in turn benefits the young players both in term of CA and their reputation.

There is an extra file in German. Do not use both at the same time.

This file adds various missing data of over 1500 1st and 2nd league clubs in over 150 nations:

This file adjusts the financial behavior of some clubs so that even after 20+ years they do not:

I have adjusted ticket prices in nations where they are calculated incorrectly, which often leads to much too rich teams in certain nations. This mainly affects South America (Bolivia, Colombia, Venezuela etc.) but also other nations like Iran, Iraq. It is unfortunately still not possible to add the correct prices. At least the values are now more realistic and prevent that clubs or whole nations could easily cover their stadium with gold.

This file adds over 300 missing derbies from clubs and national teams in over 50 nations. It also contains over 1000 reputation adjustments to create a cross-nation balance.

Among others, derbies are included such as:

This file slightly reduces the gap between the top leagues and all others in Europe. It also slightly strengthens the top leagues outside Europe and should improve the balance in long term save games.

Geographics:
The entire world is now covered with real data. From the population of a small village in the Ghanaian desert to the correct altitude of small villages near mountain tops somewhere in Peru.


These changes may have an impact on:


I'm sure there are more influences, but I'm not aware of them yet.


These changes represent the linguistic diversity of all countries in much more detail. Besides the official languages of a nation, unofficial languages are also included. These are supposed to represent those people who speak a 2nd or even 3rd language without having their 1st or 2nd nationality.

German version:
The German version is in an extra folder. If you want to play with it, delete the English version and replace it with this one.

This file by "DaveTheEditor" is now included again. It adds 24 agreements between nations. You can find this information in the nation tab overview!

I have integrated climate change into the game. Specifically, this means that with a small probability (approx. 5%) higher temperatures occur in all regions of the world than those entered by default. For example, in London, temperatures of up to 42 degrees can be reached in rare cases. Previously, the maximum was 32 degrees. This may have an influence on the fitness of the players. So it is definitely worth taking a closer look at the weather forecast for the next match.

All national teams now have the correct attendances added. Unfortunately Football Manager does not implement this 1:1 and the number of spectators in the game is often much higher than it should be. I have taken this into account in my adjustments.

For a better game balance I have lowered all national team reputations by 5%.

This helps to curb the too strong increase of the league reputation and (not 100% sure yet) encourages the AI to nominate younger players to the national team.

I have created a new league file for China. It is almost identical to the default version and contains only small adjustments to the league rules. One rule leads to far too low transfer fees being paid (not even 1 million euros for foreigners), although the clubs have a lot of money. This means that the clubs are now behaving much more realistically. Together with other files, the extreme wealth of Chinese clubs is also curbed.

I have adjusted the corporate taxes in Germany and China. These were incomplete in Germany (solidarity surcharge was not taken into account) or incorrectly entered in China. In both countries, this led to the clubs having to pay far too little tax and thus being in a better financial position than they should have been.

This works a bit differently in the pre-game editor now, so I needed a bit more time for the file. A total of 39 clubs from 31 nations were edited. In concrete terms, this means that the "club DNA" is now also better recognisable in the game. Clubs that consistently sign U21 players will now also do so in the game. The same applies to clubs that have a strong preference for new signings from a certain nation.

In Belgium, France, Italy and Spain, the league rules are bugged (even if they are theoretically correct). Clubs in League 2 or 3 often get into financial difficulties. The reason is that they do not meet the stadium requirements for the league. This leads to these clubs eventually building a new stadium, getting heavily into debt and almost choking on it. This actually makes a save game in these leagues unplayable. In reality, the rules are probably interpreted more "generously". I have either weakened these rules or deleted them altogether. I hope SI will fix this in the winter patch.

IMPORTANT
With this fix the new league mode in France will be overwritten (another bug) and there will remain 20 teams in the league. If you want to play with the new mode, you should not select the file for France.


PLANS FOR THE FEBRUARY UPDATE?

HOW TO INSTALL "Increase Realism Megapack" in FM23

Place all files (not the folder) in "Documents/Sports Interactive/Football Manager 2023/editor data".

29 comments have been posted so far.