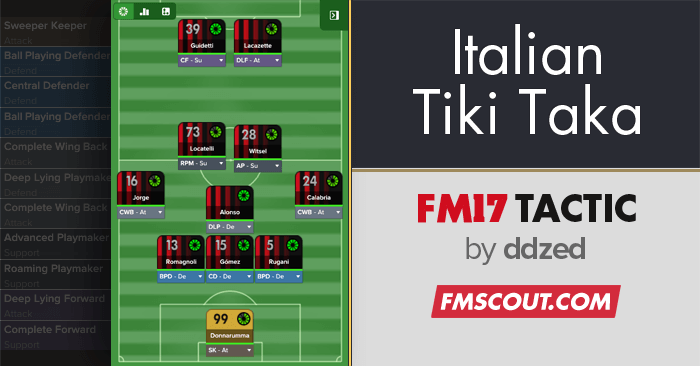 Italian "Tiki-Taka", well not quite. At least I was not trying to create something like that, but it seems that I did something similar. In my first season I conceded a lot of goals, so I switched to three CBs, also I had more strikers but had no quality wingers and no money so I had to try something different.

There is the conception that every high profile team with high ambitions has to play possession based football(not my style), so I had to adapt and I decided to play in a formation like Juve, but with higher possession of the ball and more aggressive.

Well as I said it's the first time I created a tactic with 3 CBs and based on possession, and boy did it work. Been using it for a season (2017-'18), currently unbeaten for 74 games (a few from the previous year), had a winning streak lasting 42 (!!!) games, won every competition, and for the first time since I started playing Football Manager (11 years) I had an unbeaten season.

About the formation, as I said, 3 at the back, here I play with 2 ball playing defenders and a simple defender in the middle, but I do this because I try to exploit my players to the maximum of their ability, also depending on the players you have you can use only one BPD in the middle( I strongly suggest you use at least one BPD because it is a pleasure to watch him assist with 50-60 meter long passes).

Moving up a line you find another 3 players, while Juve uses their wingers a little higher(Midfield), I had to play with wingbacks because I had only fullbacks at Milan, but seeing the things in perspective it was the best decision I made. It's pretty straightforward actually, the faster they are the better, like Calabria, that way they can make those amazing runs like Alves did for Barca a few years back, and of course the majority of the assists come from crosses. People say that it's not that easy to score from crosses like in FM16, well, for me still does the trick.

Let's agree on one thing, you can either like or dislike Barcelona and their way to play the game we all love, but I think we all can agree that it's effective. Having said all that, there is the age old debate that who is the most important player in their mechanism. The most obvious answer would be Messi, but than you start to think and you realize that Messi is just the cream on the cake, so you come up with Iniesta, he's good, awesome actually, but in my opinion the key for their game lies in Busquets. He's the type of player who can disappear completely and still contribute more to the game than most. Having said all this I think you can assume that he's my favorite player, and he is. So almost every time I create a tactic I try to use a player who does what he does, breaking up the opponents game and also coordinate my own game.

Well for this tactic to work one of your best player has to be like Busquets, a defensive midfielder with high ratings in positioning, vision, first touch and most importantly a good passer of the ball, also with my love of Busquets it's a plus if he's tall, that way he can intercept even more of the oppositions attacking moves. In front of him there are two centre midfielders, I found that their roles are not that important for the tactic to work, this way I'm using one of them as a playmaker, and the other one on any role that balances my team, like a box-to-box player so he can help when I'm defending but he's helping my attackers when I'm attacking.

Strikers. Well some might say, the more the better, so I'm using two of them. As you can imagine with no attacking midfielders there is a huge gap between them and the rest of my players, On one hand I'm compensating this by positioning the defenders higher up the pitch(Push higher up TI), and on the other hand the front two operates in a more deeper position. Regarding the player roles, I tried to use a "Target-Man like" player,(Guidetti) who simply put can do everything from scoring to assisting and helping in the build-up. While the other one has to be a Poacher like fast player who has no trouble in putting the ball in the net. As it turned out Guidetti can perform on a level I've never thought of: 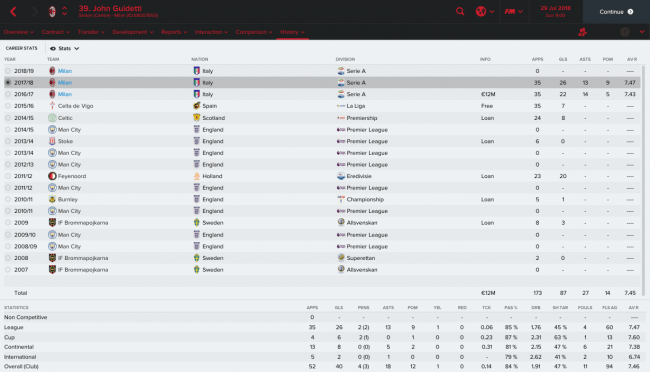 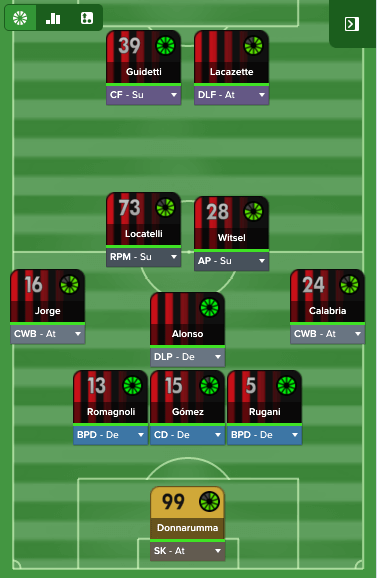 And the player roles for it: 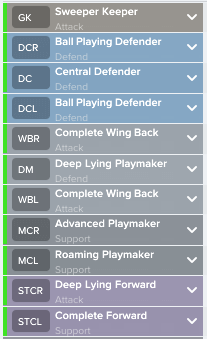 As I said it before the roles I'm using are to benefit the players I have. With the remarks that, it's good to have a player like Bonucci in the back, see his through ball at this years European Championship against Spain. The DM has to be one of your best player in your squad, so invest in a good one(I'm paying 9 million a year for Xabi Alonso but he's worth every cent), and depending on the oppositions attacking force he can either be on defend or on support.

The instructions are also simple, like every possession based tactic you have to pass the ball around quite much. 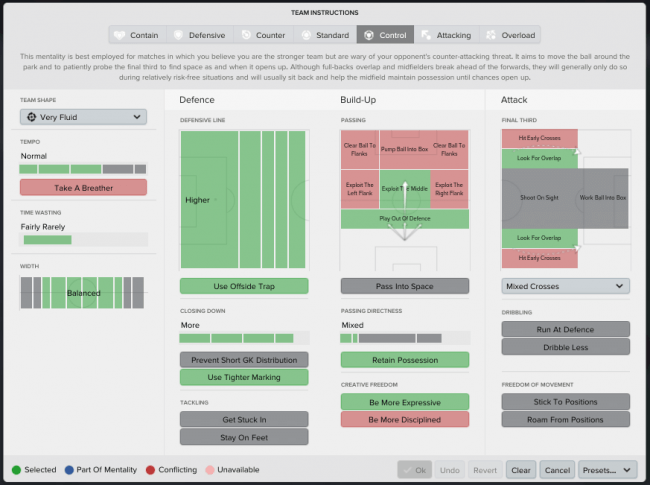 Well, that's what I created. As you can see it works quite good in the Serie A. I haven't tried it anywhere else and cannot guarantee that it works for every team, regardless I decided to share with you guys and I'm curious of your oppinion. Any suggestion and feedback is well appreciated.