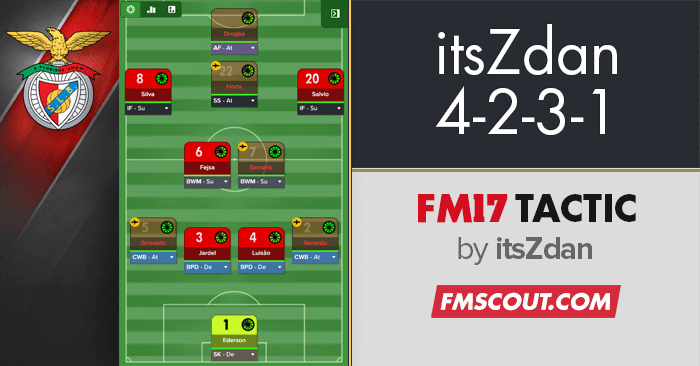 Tactic is built from the front to the back, so starting off with an Advanced Forward, pretty self explanatory, lonely man sitting up front waiting to be served. Behind him a Shadow Striker that will both feed him and get goals on the spaces the AF gets for him when he drags the opposing defenders. Helping them are 2 Inside Forwards with support duty, they will cut inside either dragging the fullbacks with them or creating chaos on the center-backs, this will again give the SS more liberty.

This is the attacking bit of the tactic so now we need to look into defending, and that is made by 2 Ball Winning Midfielders, the left one being slightly more positional, this will give good ball recovery in the midfield and the further ahead you get the ball the better.

Since the midfield is set to be recovery balls we need someone to make the plays and that comes from the Complete Wing-backs that will move into the space the IF's give them, making for great passing around midfield along with some crosses. The Central Defenders are set to Ball Playing Defenders, this is both important AND dangerous because you do need them to be good at it, composure is a must! They will be getting back passes from midfield and will start creating plays instead of just destroying it.

Now you ask yourself, "how can this work?", well, it can work due to the Sweeper Keeper on defensive duty, he will help clear balls, offer passing solutions and overall work almost as much as a defender.

The reason the tactic is Structured and set to Standard is so that the players don't deviate much from what is asked while also letting YOU make a more defensive variation by merely changing to Defensive or Counter or a more attacking one with Control or Attacking, making for 3 variations of the tactic being trained getting players familiar with it and allowing you to change it according to what is happening in the match without suffering from players not being familiar with it.

When down to 10 men, remove the AMC

All set pieces are done, both defensive and attacking