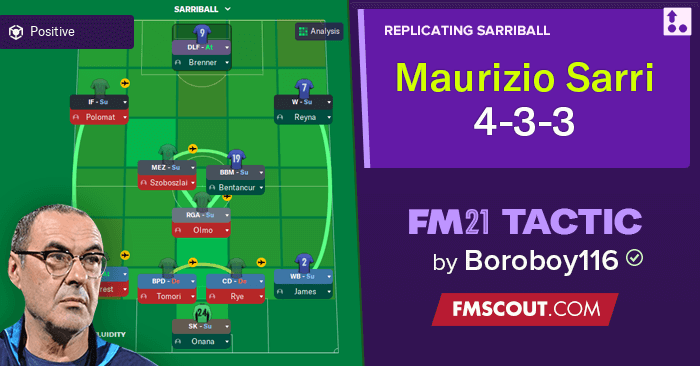 
Maurizio Sarri did not play professional football; instead, he worked as a banker while playing and coaching amateur football. Sarri coached many teams in the lower leagues of Italian football, and it wasn't until 2005 he manged in the Seria B for the first time with Pescara.

Sarri then bounced around clubs again until he took the Empoli job in 2012, this was his breakthrough job In his three seasons Empoli finished 4th losing in the playoffs before achieving promotion with a 2nd place finish. In his final season, Empoli finished 15h after six years away from the top flight ensuring they would maintain their place in Seria A the following season.

Sarri moved to Napoli the next season, and this is where his reputation rose, as Napoli finished 2nd and 3rd twice, in his final season before moving to Chelsea Napoli ran Juventus all the way and eventually finished 4 points behind the old lady.

Sarri is considered an intelligent coach taking a meticulous approach when preparing for matches paying particular attention to set-pieces, often having his players practice many different plays for the same set-piece.

One of the main trademarks of his highly organised system is a four-person back-line. His teams usually play a high defensive line and adopt the offside trap and a zonal marking system.

Sarri requires his defensive players to be synchronised in their movements, anticipates plays, and look at the ball as a point of reference, not their opponents.

Essentially, Sarriball is a method of high-pressing play (though not to be confused with Jurgen Klopp's gegenpressing) that forces defenders into making mistakes, which are then punished by the counter-attack.

The other vital components to a Sarri system are the use of a deep-lying playmaker who dictates the play most famously Jorginho for Napoli and Chelsea. Sarri also needs overlapping wingbacks to provide the width to his linear system.

Sarri's teams are known for playing an attractive, exciting, and attacking-minded brand of football, based on retaining possession, movement off the ball, and many quick, short passes on the ground; This style has come to be known as "Sarri-ball" or "liquid football".

The essence of Sarri-ball is a brand of possession football where ball retention is critical, but not just for the sake of it. Sarriball relies on quick interchanges to move the ball up the field, making it a form of vertical tika taka. Players use their individual quality to make things happen in the final third of the pitch.

Sarri mostly prefers attacking through the left, a flank stacked with attacking prowess, and his players need particular tactical identities to be a success in his system. Sarri wants his teams to build from the back and success depends heavily on his defenders holding possession to begin the first instance of attacking threat.

Sarri's defenders are the first instigators of the attack – as seen through his use of defender Kalidou Koulibaly whose passing and ball control was integral to the Italian side's push for the title. Sarri instructs his defenders to play quick triangular passing combinations to beat the initial press and draw the opponents midfield out of position.

Sarri's Napoli's modern, innovative, and creative playing style, as well as their mentality, ability to move up the pitch quickly on counter-attacks and score many goals, won praise from several pundits, players, and managers, including Pep Guardiola and Cesc Fàbregas.

In 2018, former manager Arrigo Sacchi praised the style employed by Sarri's Napoli side as "the most important thing seen in Italy in the last 20 years.


Check the video below for a full tactical overview and analysis.