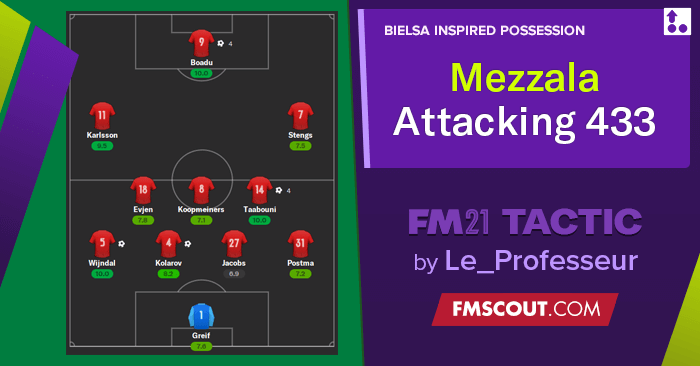 “While the opponent has the ball, the whole team presses, always trying to cut off the play as close as possible to the opponent’s goal; when we get it we look to play with dynamism and create the spaces from improvisation”. - Marcelo Bielsa.

Based on my FM20 Bielsa's Boys tactic, this time around I stuck with similar principles but tweaked many aspects in order to make the tactic more complete.

The idea is simple; we want the team to be controlled in possession whilst marauding in attack. The MC (DLP on defend) holds his position nicely whilst the two Mezzala's really run the game from the middle. The two IF's pose a constant threat inside, effectively creating a three man striking system at times, but it is the AF that is really the star of the show. Expect a ton of goals. 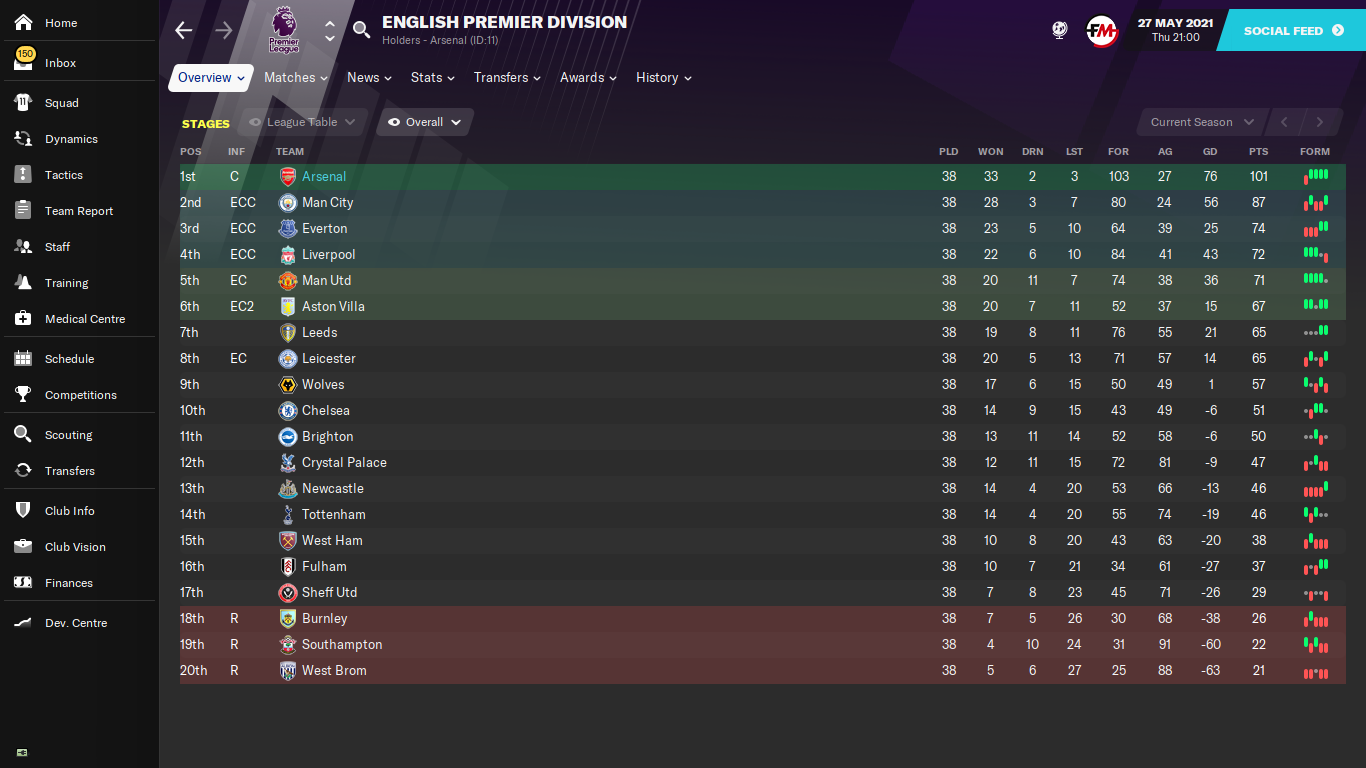 Our first sim came courtesy of my beloved Arsenal (with their struggles in real life, I wanted at least some semblance of hope). To call it a resounding success would be an understatement! As usual, I simmed the entire year and only set up the team and set piece takers once at the beginning of the save, before the simulation started.

As evidenced above, the team dominated in attack whilst remaining quite solid in defence.

Losing to Liverpool in both the Community Shield and FA Cup Quarter Final, the team made up for it by securing the treble with a storming PL win, Carabao Cup and Europa League triumph. 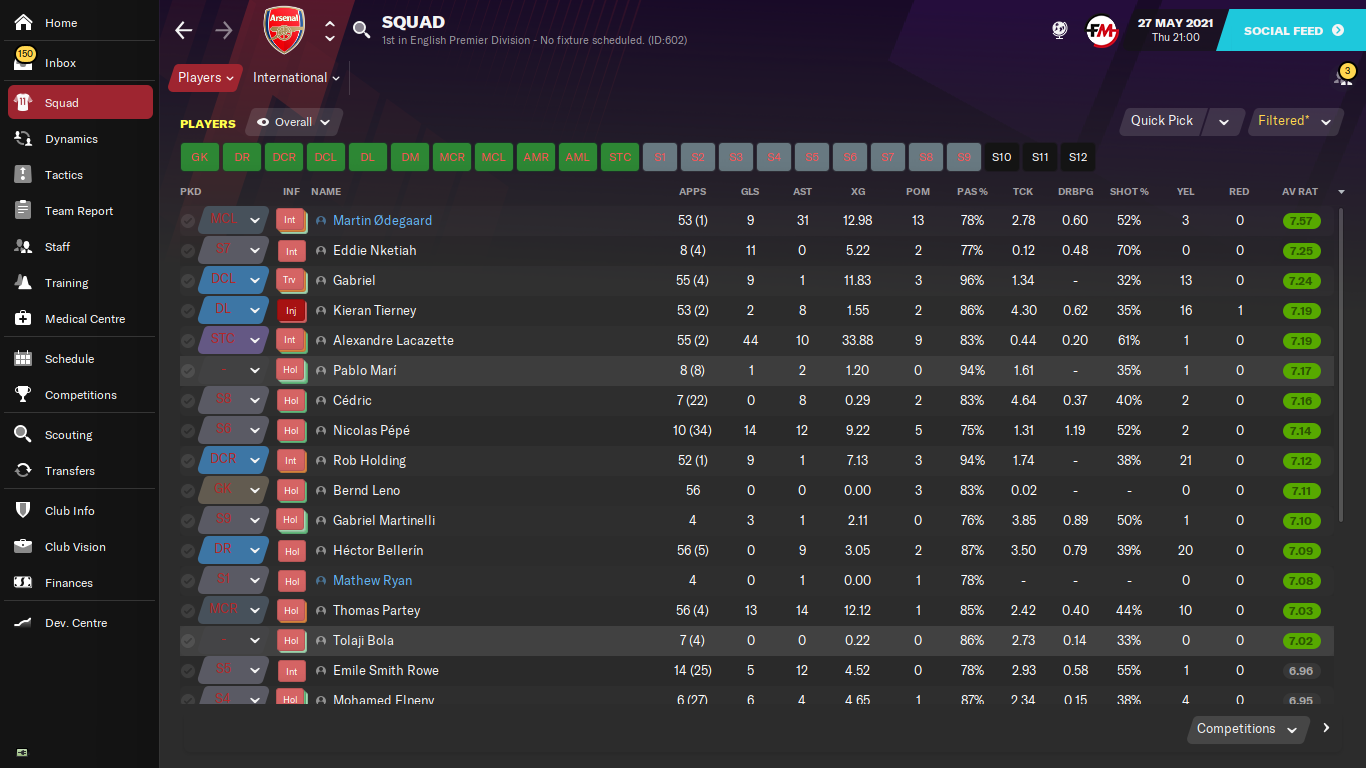 The real joy here was seeing Lacazette smash in 44 goals and Martin Odegaard captivating the midfield with 9 goals & 31 assists.
Around the rest of the team we saw Aubameyang grab 18 goals & 10 assists, Saka 16 goals & 6 assists (despite both suffering injuries during the season), Thomas Partey contributed 13 goals & 14 assists, and even the back up players contributed incredibly (Pepe with 14 goals & 12 assists, ESR with 12 assists as a Mezzala and Nketiah with 11 goals from only 8 starts).

This tactic also comes with a large set piece threat, with Gabriel and Holding both grabbing 9 goals each this season. 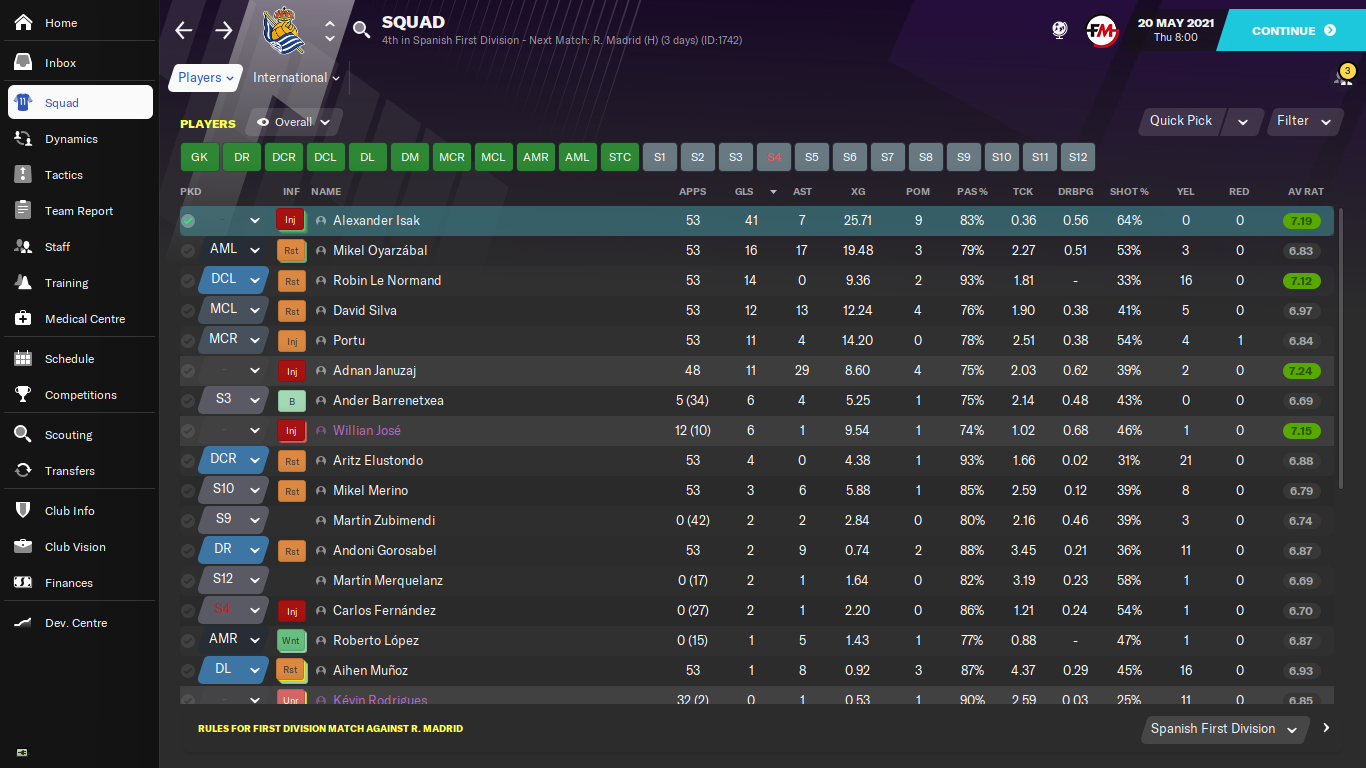 The next sim saw us take Real Sociedad to a respectable 4th place finish, but it all could have been so much greater if not for two devastating injuries to our key players.

Notable results include a 6-0 win over Sevilla and a 7-0 smashing of Bilbao. 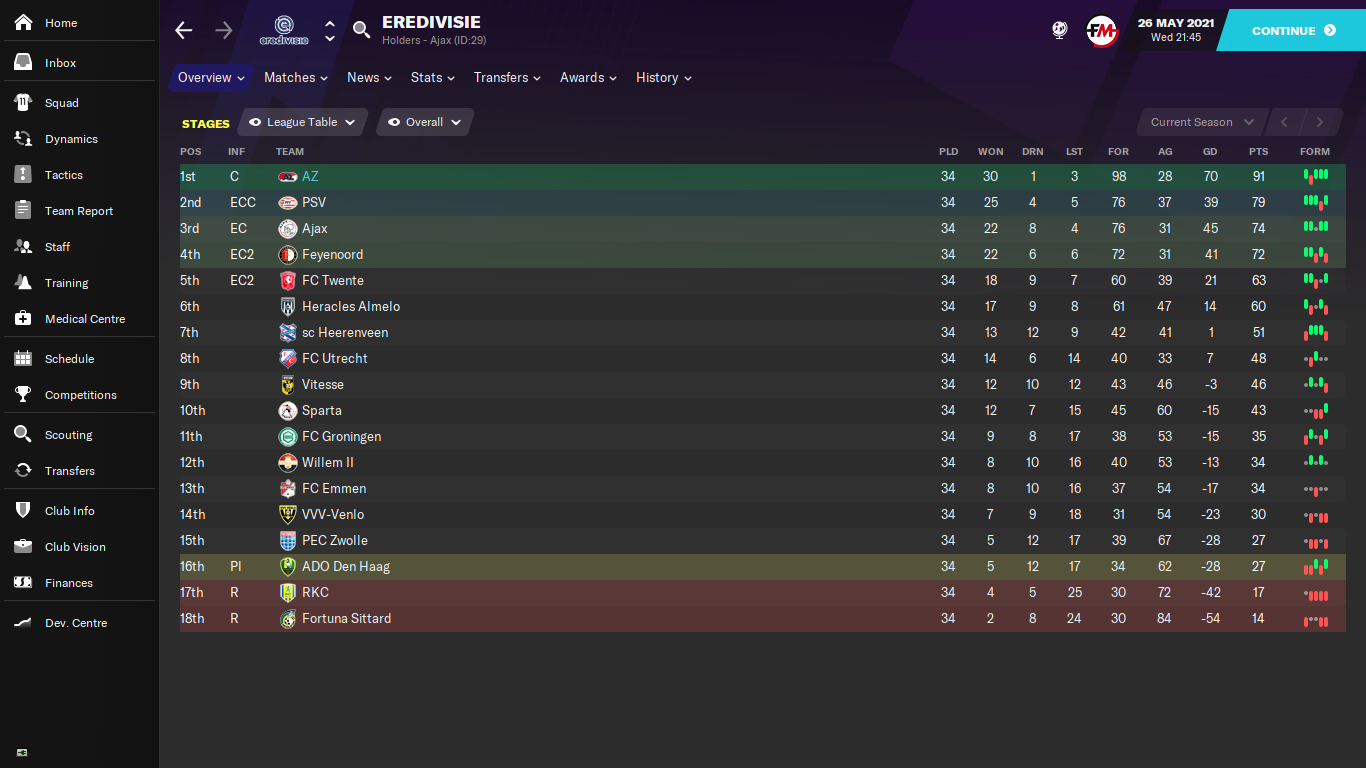 My favourite of the sims has to be the AZ Alkmaar test.

Not only did they outscore everyone, but they kept the leagues best defence and managed to complete the treble with the Eredivisie, Dutch Cup and Europa League triumphs.

Myron Boadu led the way with 41 goals & 10 assists, but it was another CB masterpiece from Teun Koopmeiners who netted an incredible 18 times from set pieces, providing another 7 assists! 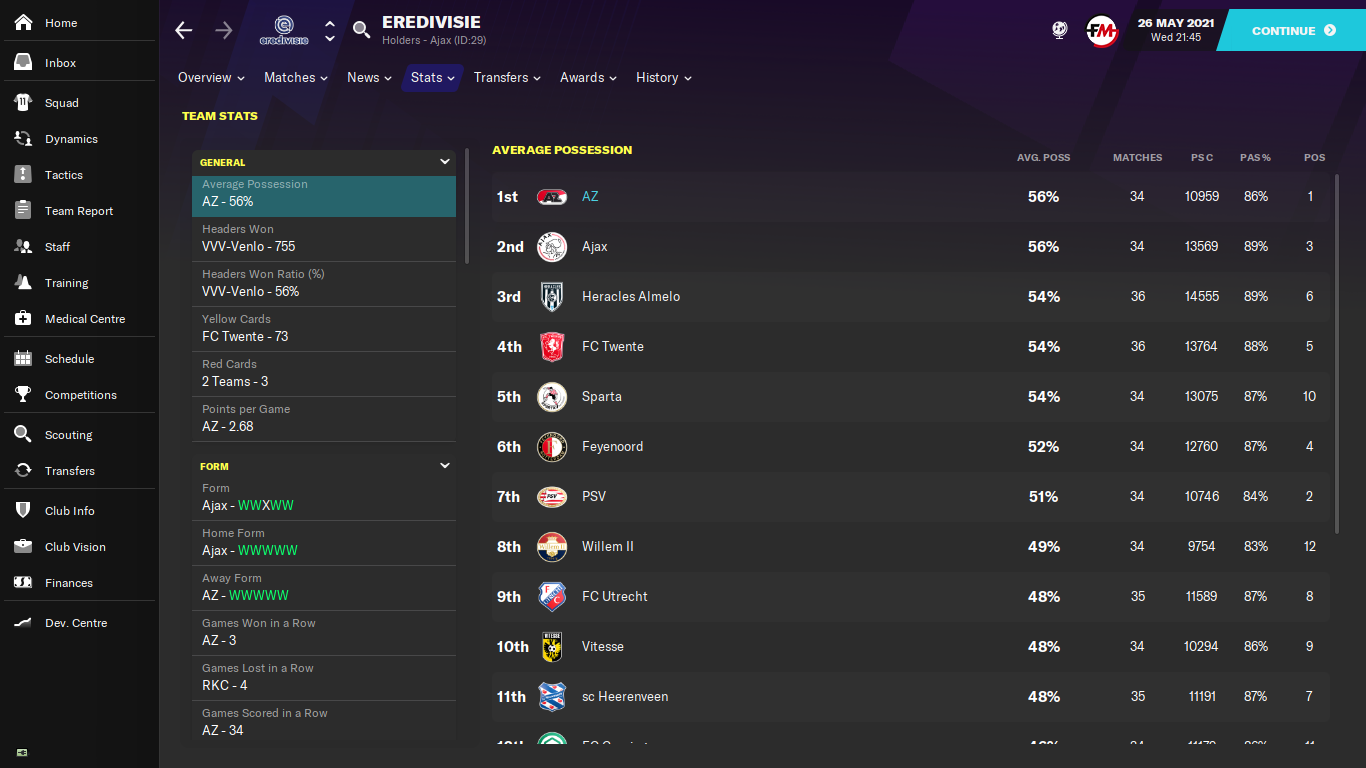 The team dominated possession, finishing top of the league table in that regard as well as creating the most clean-cut chances and the most interceptions.

I enjoyed the simulation so much, in fact, that I decided to take control of AZ for a season myself and it's safe to say that even in the second season it is still deadly: 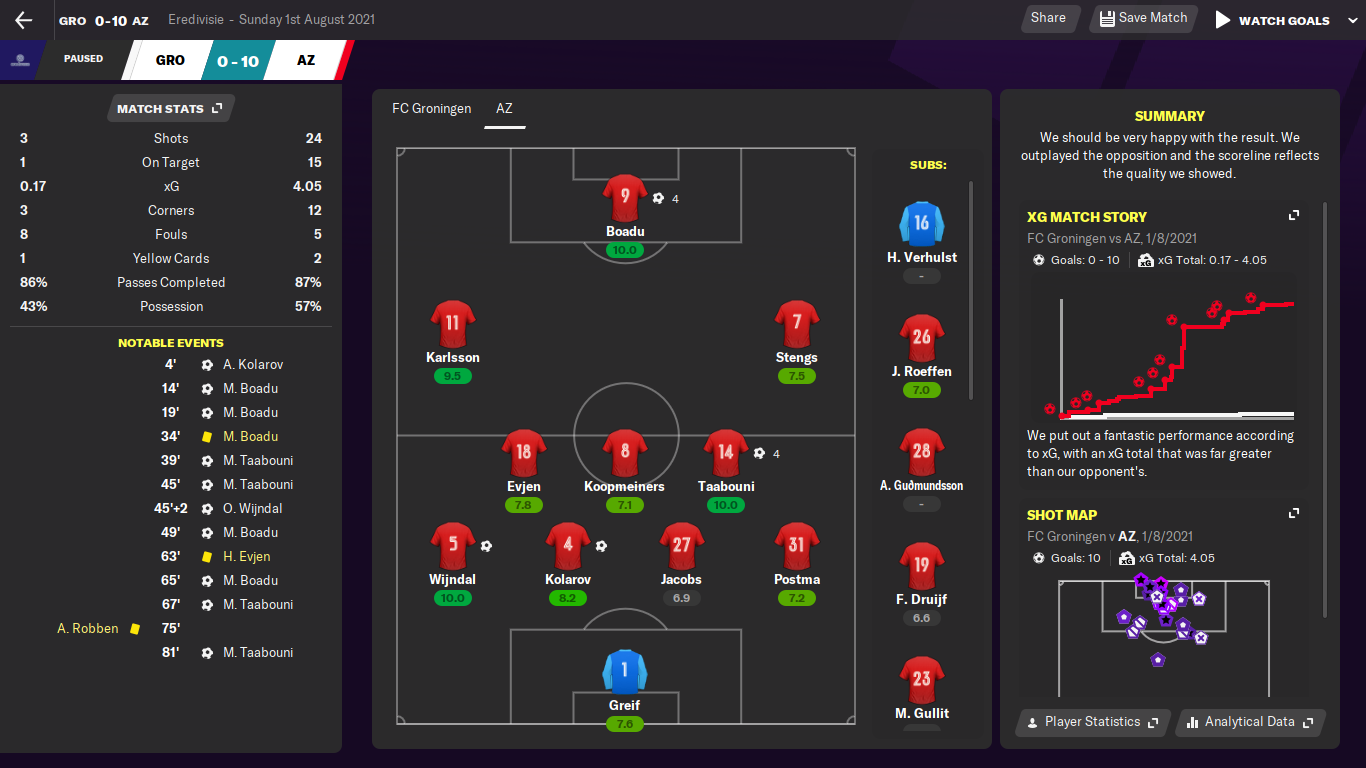 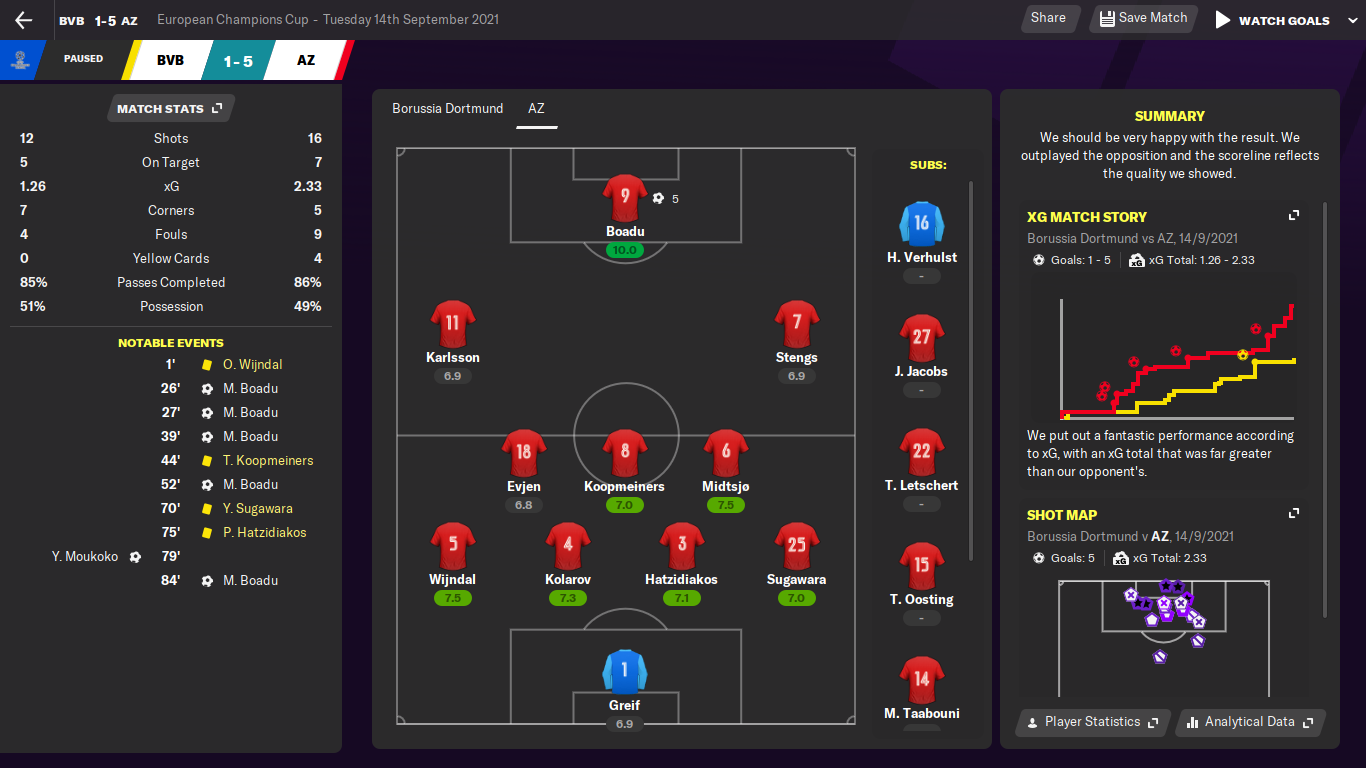 Other tests were carried out on the likes of Heerenveen (3rd place finish), DC United (MLS Cup winners), AS Roma (Serie A Champions) and Dortmund (Bundesliga runners up).

This tactic won't guarantee you success - but it promises goals and lots of entertainment, enjoy!

Discussion: Mezzala? I barely know her!