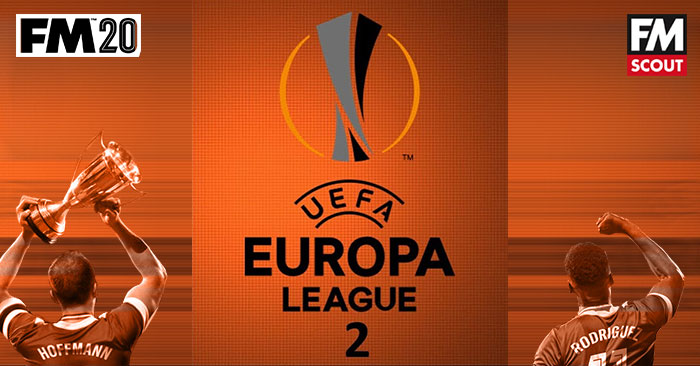 There is a new competition in Football Manager 2020 that many may not be aware of – the Europa League Conference. Yes, this is a real competition and yes, it is in the game – however it will most likely be named Euro Cup II.

First off you will not see it right away, it does not kick in until the 2021/2022 season. This competition fixes the Europa League and creates a more competitive Europa League competition; also, this EL2 is for teams who find their European competitions ended early in qualifying or exits in group stage.


Format Changes:
There are several format changes to note; Europa League shrinks down to 32 teams, just like the Champions League and Europa League 2.

Qualification spots change as well. Now this is a bit more complicated to explain but you will notice in the 2020/2021 season there will be a few more spots available for teams to qualify for a European competition. It does not increase by much – in top tier nations only by one spot, possibly two. For nations that are mid-ranked two or more spots will be made available to qualify for this competition. This may also change the format of qualification spots already given in your league. Before a spot may get you to a Europa League Play-off place but instead you may get drawn into the Europa League group stage; it is imperative to look at what the rewards are for finishing in whatever position in your league.

Cup competitions have more significance now. This is not fully confirmed yet, but nations with two or more domestic cup competitions; this could mean that there is an extra incentive for clubs to have a cup run. These competitions already give you a European birth but it will be further back in the qualification process and you have a high chance of failure to get to the group stage. The Europa League II can allow you to fail in the qualification process and still be in Europe or for you to possibly get an automatic bye into the latter stages of the Europa League 2 qualifying rounds.


What Does if Mean for You?
This completely changes the scope when managing teams in lesser European Nations or managing mediocre sides; now there is an opportunity for a European run and to gain more income. This can enhance your stories and managerial careers during FM20 - giving extra incentives but also changing the scope completely in some cases.

The Europa League 2 can allow teams from lesser nations to increase the overall revenue and quality of a league over time and make it either easier or more difficult for you as a manager. One nation can overtake the one you are managing in and steal some important spots in qualification or make it harder to qualify. It could also increase the quality of more teams within your league making it more competitive. The Europa League 2 can also make it easier for you as you may be the only team in your league who is competing in the group stage of the competition; giving you greater pull, higher earnings and facing better opposition.

It is highly recommended that you take a look at how to qualify for this tournament when you are in the 2020/2021 season and also the new qualification spots within your league. This can save your skin if you fail in the Europa League or give you extra incentive to reach for a spot that would normally not be very important.