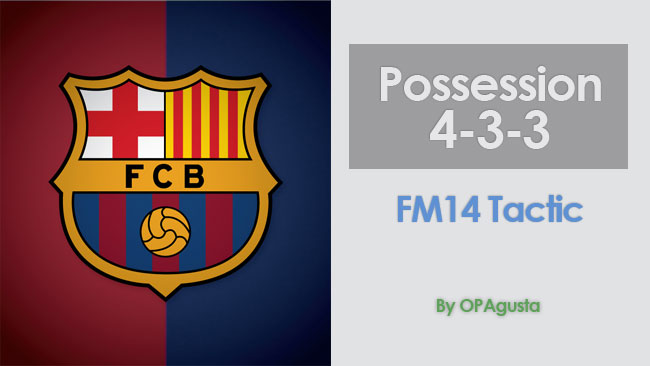 I would like to share a tactic which I have used with FC Barcelona for 3 seasons and entering a fourth season in my FM 2014 save and after 3 Liga BBVA Titles, 3 Spanish Cups, 2 Champions League Titles, 2 Spanish Super Cups, 2 European Super Cups, 2 World Championships later I believe this tactic is as dominant as ever.

Before I bore you with tactical details, I would like to show you some of the match results and league tables.

The tactic is inspired by Guardiola's Barcelona team which still had David Villa and Samuel Eto'o playing. It was the most devastating team ever ensembled with Busquets, Xavi and Iniesta controlling a midfield, and Villa, Eto'o and Messi as three deadly forwards.

The principal of the tactic as you can see from team’s instruction above is:

• To control possession during offence with slow tempo, disciplined, creative and patient short passing football to unlock opposition’s defense. The rigid fluidity coupled with ‘Be more disciplined’ instruction will make sure all the players work within a tactical system without sacrificing individual creativity. Players will also be asked ‘Play Wider’ to make use of the whole pitch and create space among each other and the ‘Pass into Space’ instruction will fully exploit this space and maximize your three pacy and skillful forwards.

• To recycle/regain possession as soon as you lose it by high pressing defensive line and constant hassle by every player. In this tactic you will see a lot of pressing and double teaming as players work as a team cohesively to regain possession. The offside trap is used in conjunction with high defensive line to avoid opponent exploiting the space behind the defensive line and the ‘stay on feet’ instruction is to make sure that players do not dive into tackles and therefore will be able to recover after a failed tackling attempt.

The sweeper keeper is required to sweep the ball when the high defensive line gets beaten or offside trap fails. In offense he only has to pass it shorter to the defenders in front of him.

3.2. The Defense, the unbeatable wall

The defense utilizes 2 fullbacks and 2 stoppers. Two fullbacks with support duty will provide balance between defense and offence and they will stay wide to support players in front of them and provide overlapping run. Two stoppers will close down opposition straight away to deny them space and win the ball back. This function works well with ‘use offside trap’ instruction. In offense they will provide short simple passes. In my save game, Balanta and Pique have developed into defensive beasts.

3.3. The Midfield, the fulcrum of possession football

The midfield utilizes 1 BWM and 2 DLPs all in support duty. The BWM will try to win the ball during defense and distribute the ball with simple short passes. He will also be a link between the defenders and players in front of him. The 2 DLPs will control the possession and tempo, distribute the ball with their creativity and they will be the focus of the attacking movement. They will also provide help in defense. In my save game Pogba, Iniesta, Xavi, Verrati and Kovacic become midfield maestros.

3.4. The Forwards, the deathly trident

A CF (you can use AF or DLF or trequartista) will be supported by two IFs. The two IFs with support duty will stay wider to make themselves available for passing and they will cut inside whenever possible to shoot or make a through pass. They will provide plenty of assists and goals. The CF should drop deep and move into channel to support possession play and apart from that should be left alone to do what he wants. In my save game Neymar, Messi, Lamela has become world class forwards

Here is the screenshot:

I have listed out the preferred moves for each position to maximize the tactic. Please bear in mind that the players do not necessarily have to have all the moves but having one or two will definitely help.
5.1. SK
•Develop Weaker foot

5.2. Stopper
•Does not dive into tackle
•Stops Play to allow his team mates to take a breather
•Switch Ball to other flank

5.3. FB
•Does not hug the line
•Runs with ball down left/right
•Gets forward whenever possible
•Switch ball to other flank

5.4. BWM
•Does not dive into tackle
•Plays short simple passes
•Stays back all the time

5.6. IF
•Cuts inside
•Untrain run with ball down left/right
•Runs with ball often/ through center
•Comes deep to get ball
•Plays one-twos
•Knocks ball past opponent
•Places shot

•2 Players to stay back preferable your 2 fullbacks and one player to stay back if needed to prevent counter attack
•2 Players with good heading attribute to attack near post and far post respectively
•1 player to attack ball from deep and another to lurk outside area to pounce on any loose ball or pass to teammates, or to provide themselves as passing options. They have to have good long shot attribute
•1 Player challenge keeper and 2 players go forward

•2 Players to stay back preferable your 2 fullbacks and one player to stay back if needed to prevent counter attack
•5 Players go forward, some of them have to have good heading attribute
•1 player disrupts wall
•1 player mark keeper

If you are just starting the game, please do not focus on more than one tactic as it will just take longer for your players to master a tactic. Give some time space before training a new tactic.

General Training: Balanced
Intensity Level: Average
Scheduling: Allow rest before and after match
Match Training Main Focus: Attacking movement
Individual: Individual role based on the position you want your player to play in with Average intensity
Pre-season: Have as much pre-season matches as possible, probably 5-10 matches (depending on your schedule) with 2-3 days’ rest in between (I use 2 days rest), to get your players to adapt to the tactics. Arrange your friendly matches so that there is a space of 4-5 days between the last friendly match and the first competitive match.

Since this tactic employs high defensive line and offside trap, once in a while it will get exposed and fail (please read my point number 4). You will also find out that sometimes this tactic will bore you to death with few chances (or highlights) created due to its slow tempo and low risk nature.

In my save game with Barcelona? Yes, Because Barcelona have great players and lot of money to spend. That is why I need some testers who are willing to try it with middle or lower teams, or with lower division teams. It has also worked with both 14.1.3 and 14.1.4 patches.