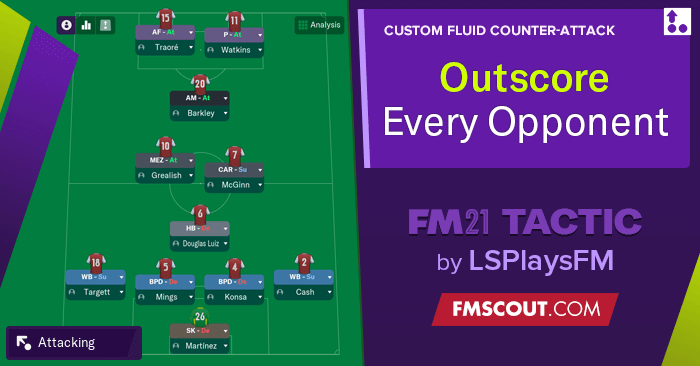 Welcome to my 4-1-2-1-2 Narrow Diamond Tactic which focuses upon counter attacking and outscoring your opponents when possible in order to win!

I used this tactic in a personal save initially with Atalanta and took upon their philosophy of we’ll score more than you, which is very much what this tactic does. While the tactic itself does score a lot, it is also relatively good defensively with good sides, but the smaller sides it can be leaky, but the strong goalscoring abilities of it, often allow for good results.

I have extensively used and tested this tactic in FM21 both across my FM21 personal save with Atalanta in the Serie A and also and also across 2 simulated test saves with Manchester City and Aston Villa!

To help explain the tactic and how it works as well as all the results of my various played and simulated saves, I created a tactics video over on my YouTube channel LSPLaysFM! You can find the video below:

In every save each team has performed very well and especially offensively and in the case of Villa & Atalanta far above expectations. On top of that, in every save I have tested it, the Golden Boot winner in each respective league has come from the side using this tactic (Raheem Sterling, Luis Muriel and Bertrand Traore).

The tactic itself managed to secure a domestic double for Man City with them scoring 98 league goals and conceding 36 goals in the Prem. They also reached the Champions League Semis but lost to Real over 2 legs and also Sterling managed to even win the World Player of the Year Award. Atalanta in my own save won Serie A by 2 points over Juventus on the final day which I was amazed with. Finally Aston Villa somehow finished up in 4th place which is by far the craziest of all, and they even managed to score 79 goals in the Premier League with Bertrand Traore finishing top scorer with 27 league goals in the first simmed season as well!

You can also see in more detail below exactly how the tactic works and the results in a screenshot format below as well if you’d prefer.

The tactic is a Narrow 4-1-2-1-2 Diamond formation and utilise an attacking midfielder, underlapping wing backs and two often pacey striker and is a very narrow tactic.

The tactic does highly rely upon its often athletic wingbacks, an advanced forward who is either very pacey and/or good off the ball and then a Half Back who is able to sit in front of the defence and fill in when required when your Wing Backs push up in attack and who is preferably a decent passer of the ball but more so good in the air and with their defensive attributes (but it is not vital).

As I have stated this tactic does phenomenally well offensive and focuses mainly upon counter attacking. However just because of that, does not mean that the tactic doesn’t work for big teams, because as shown by my Manchester City test, it most certainly does work for teams of any real size. 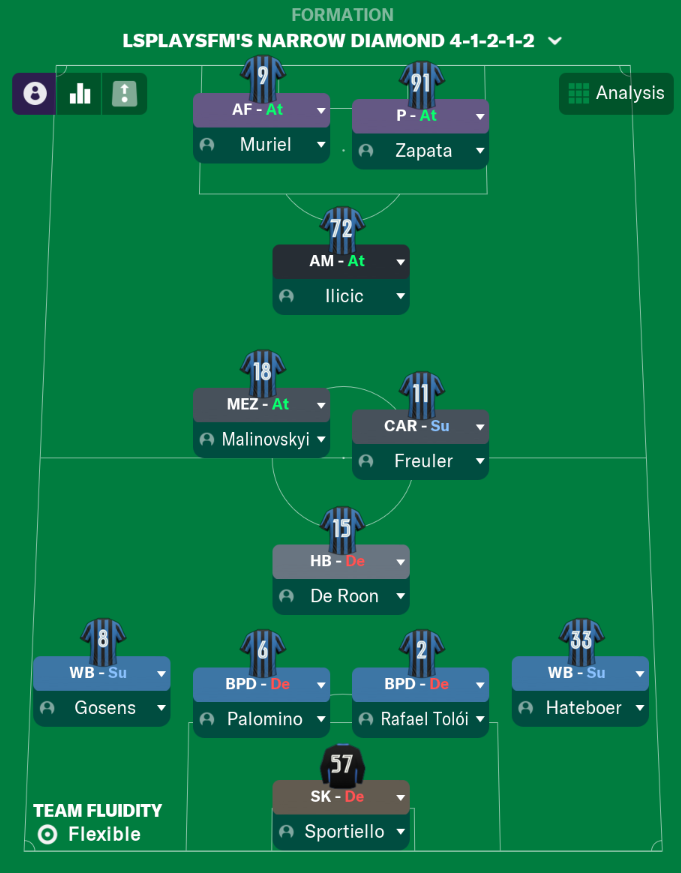 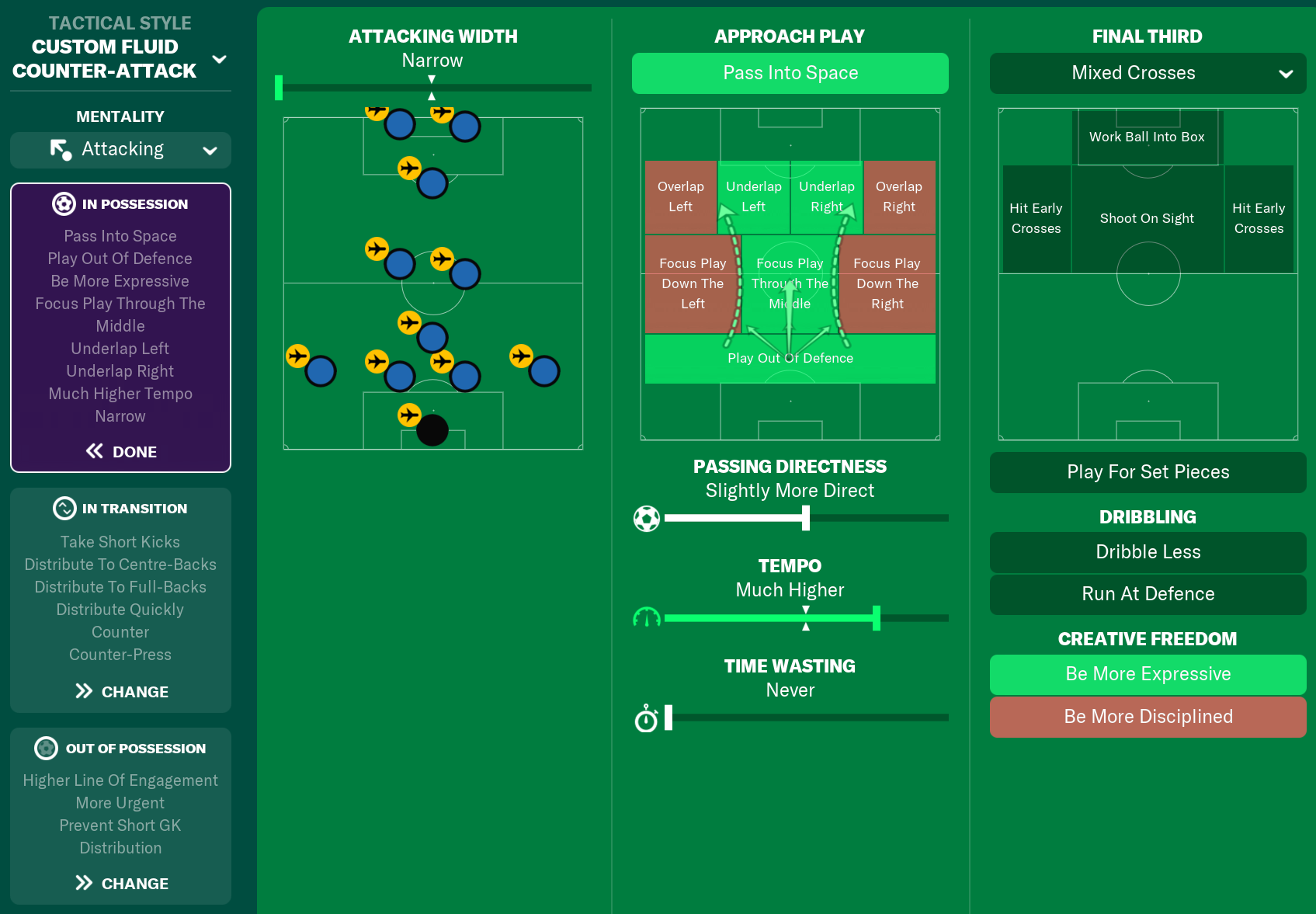 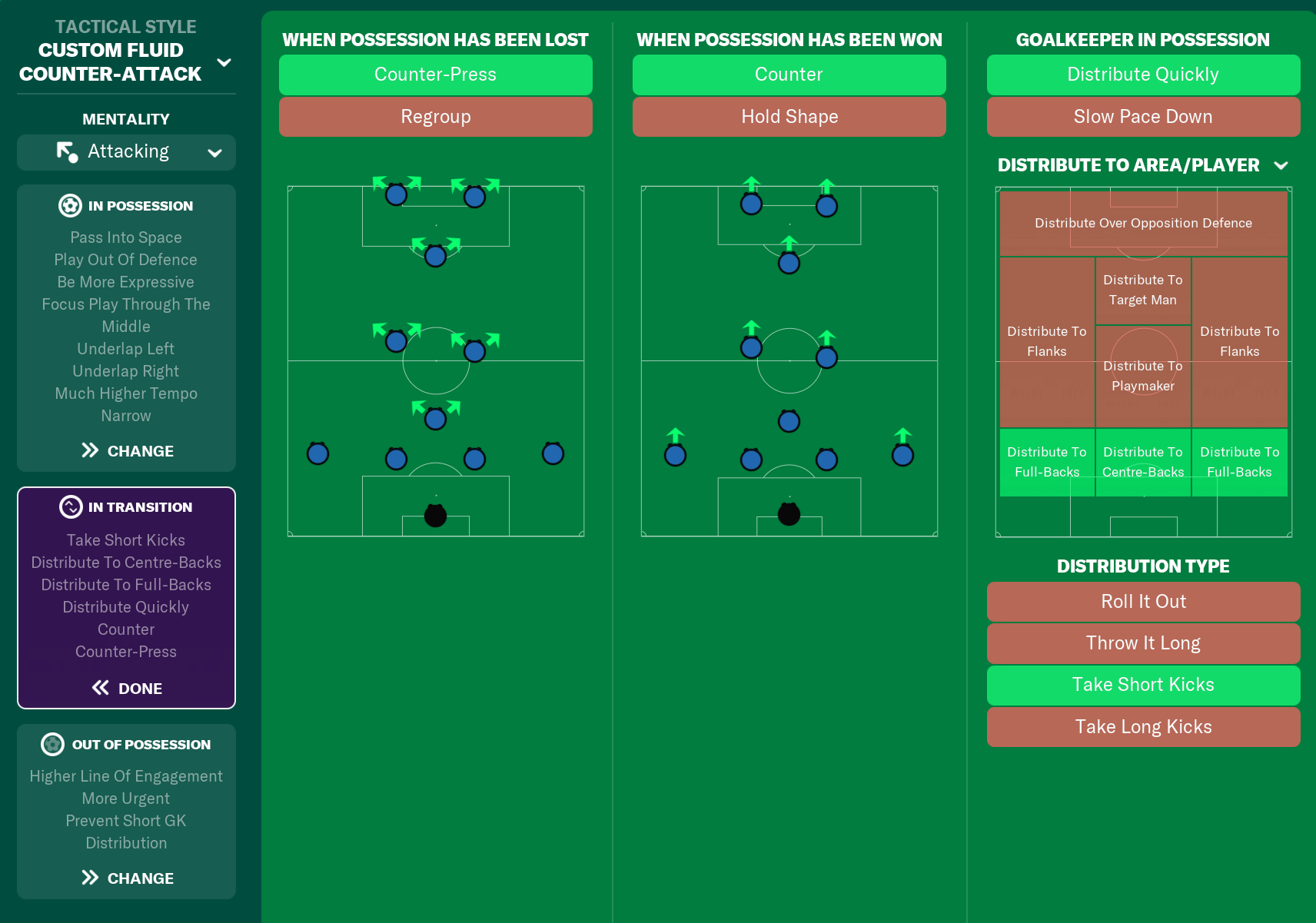 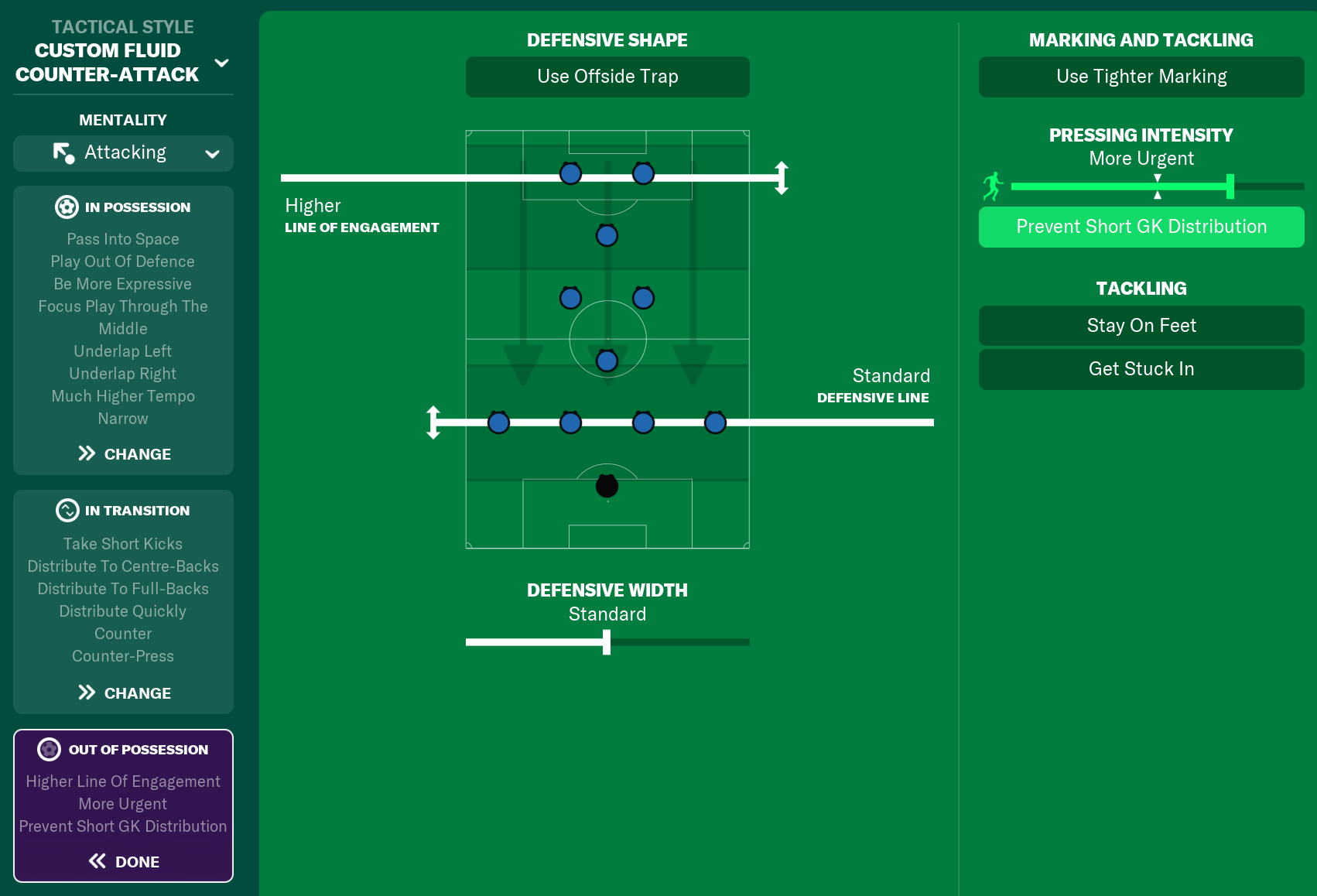 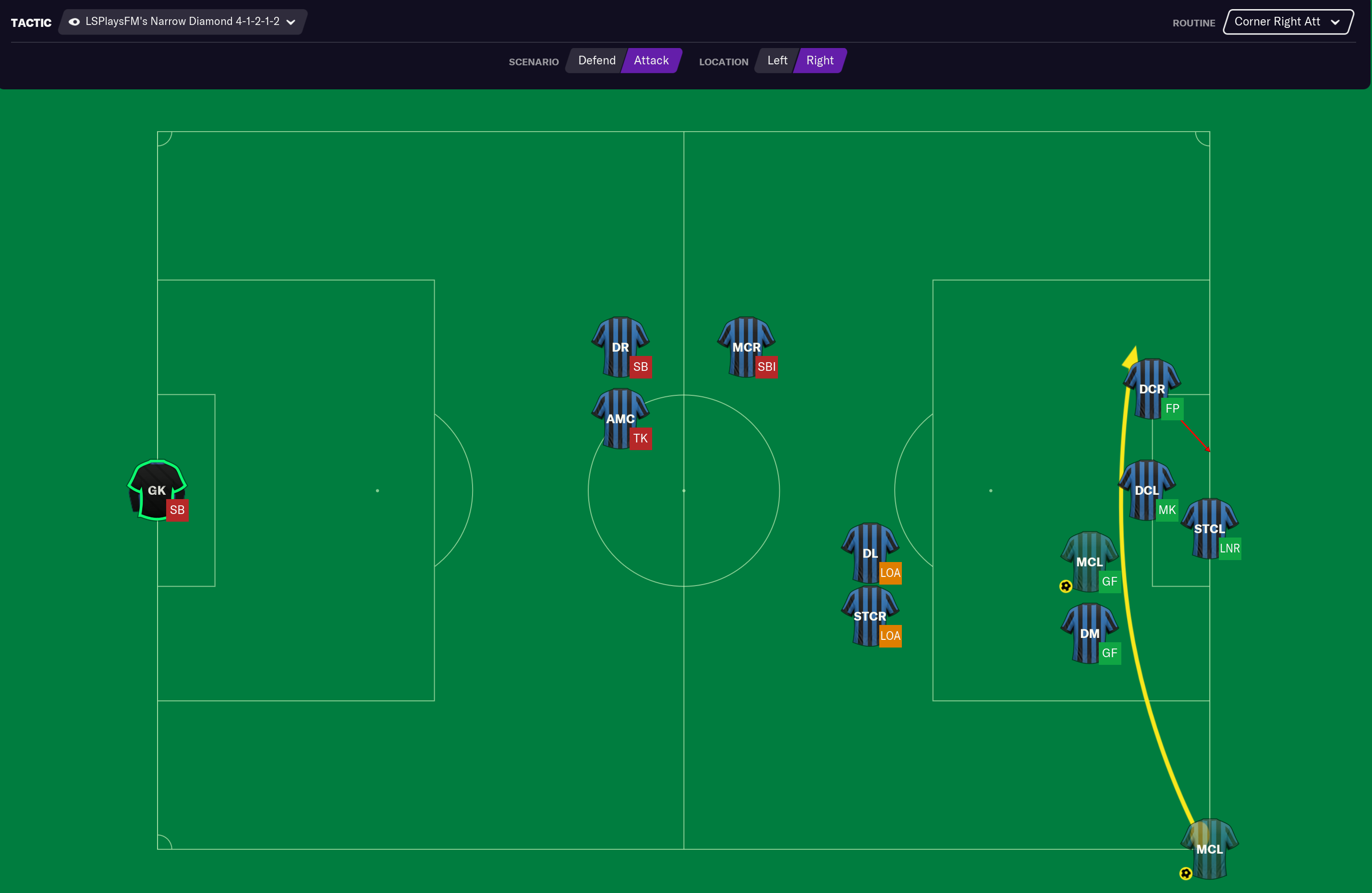 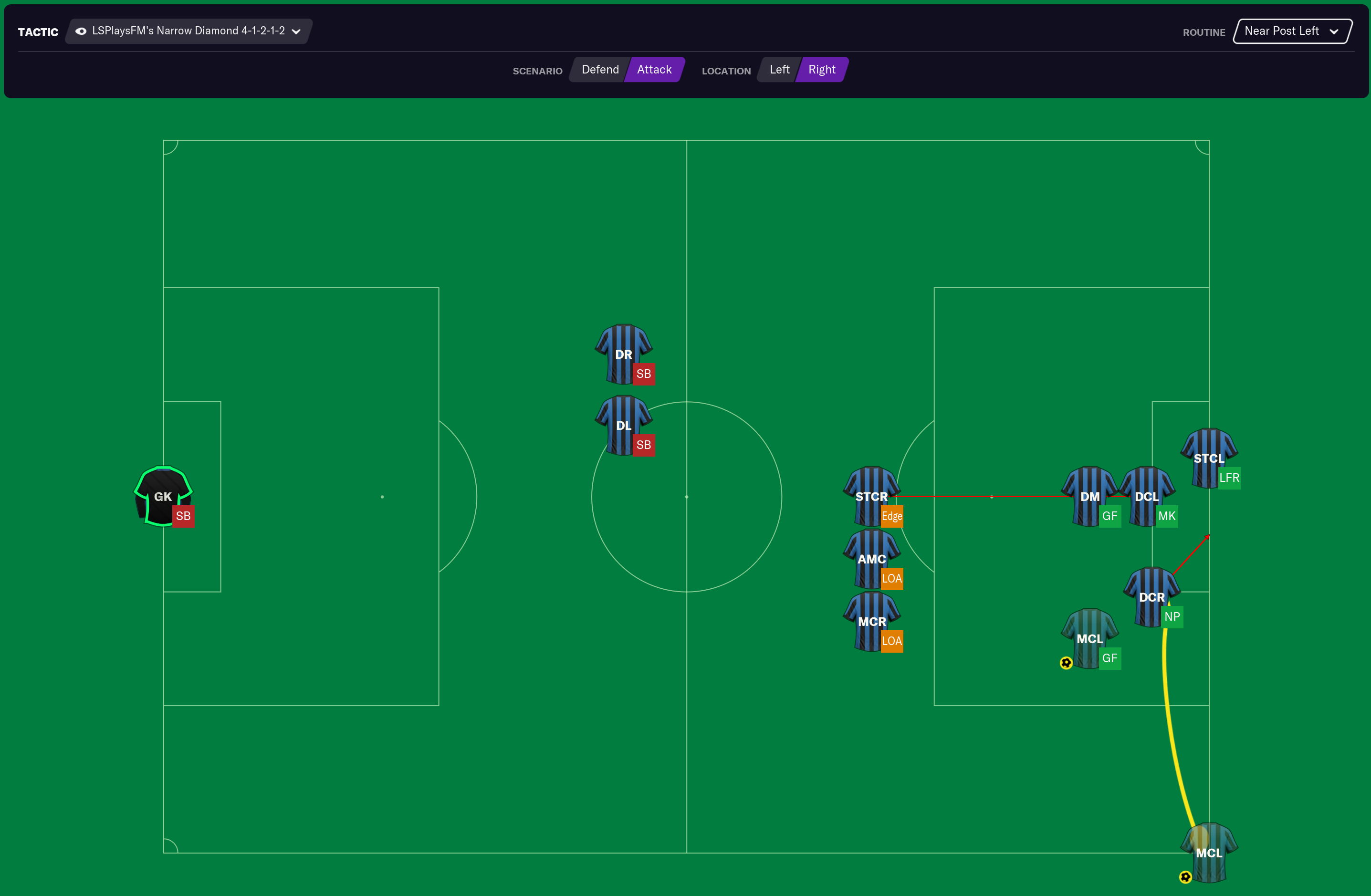 Just so you are aware with all other Set Pieces these are simply set to the default options as I found they worked suitably well for my sides, should you want to adapt them then feel free as doing so may make the tactic that much more powerful!

Also in addition to this, my training and opposition instructions are simply set to be handled by the Assistant (I know much to my own detriment). In terms though of player instructions, most are left to the defaults for each position, excluding the following positions:

WBs Both set to Stay Wider and to mark their respective AML/AMR (depending on left/right WB).

Finally the CAR & MEZ are both set to Run Wide With The Ball.

Using this tactic at Atalanta in my personal offline save we managed to finish up as winners of Serie A in our first season. This was with the entire real life Atalanta side intact (I disable the first transfer window and in the Jan I sold 2 backup players and loaned another out), as there were no new additions to the squad. We finished season 1 on 84 points, 2 ahead of 2nd placed Juventus and we scored the most goals of any team with 82 and the second best defence of 30.

After the success with Atalanta, I then tested this out with Manchester City & Aston Villa so I could then test and see how different teams with different abilities of players would do. You can see how the Man City side mainly lined up below: 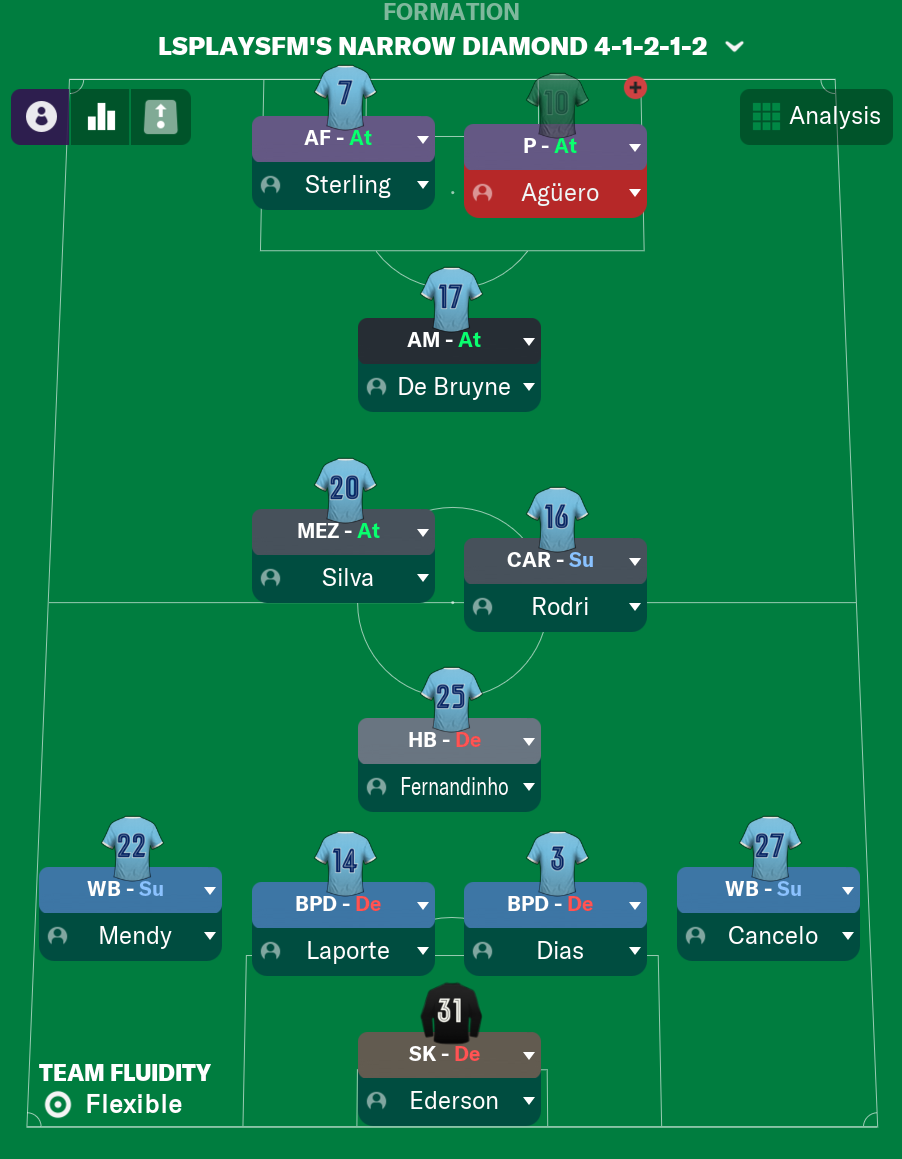 Using this tactic, Man City won both the Premier League & FA Cup. They also managed to reach the Champions League Semi-Finals however were defeated by Real Madrid over 2 legs. The squad though not only performed well as a team, but individually, Raheem Sterling performed at levels I never thought possible with him, scoring 47 over 51 games and even being awarded the 2020 World Player of the Year based on his crazy season. You can see quite how Man City got on in their competitions and the League below as well as Sterling stats too: 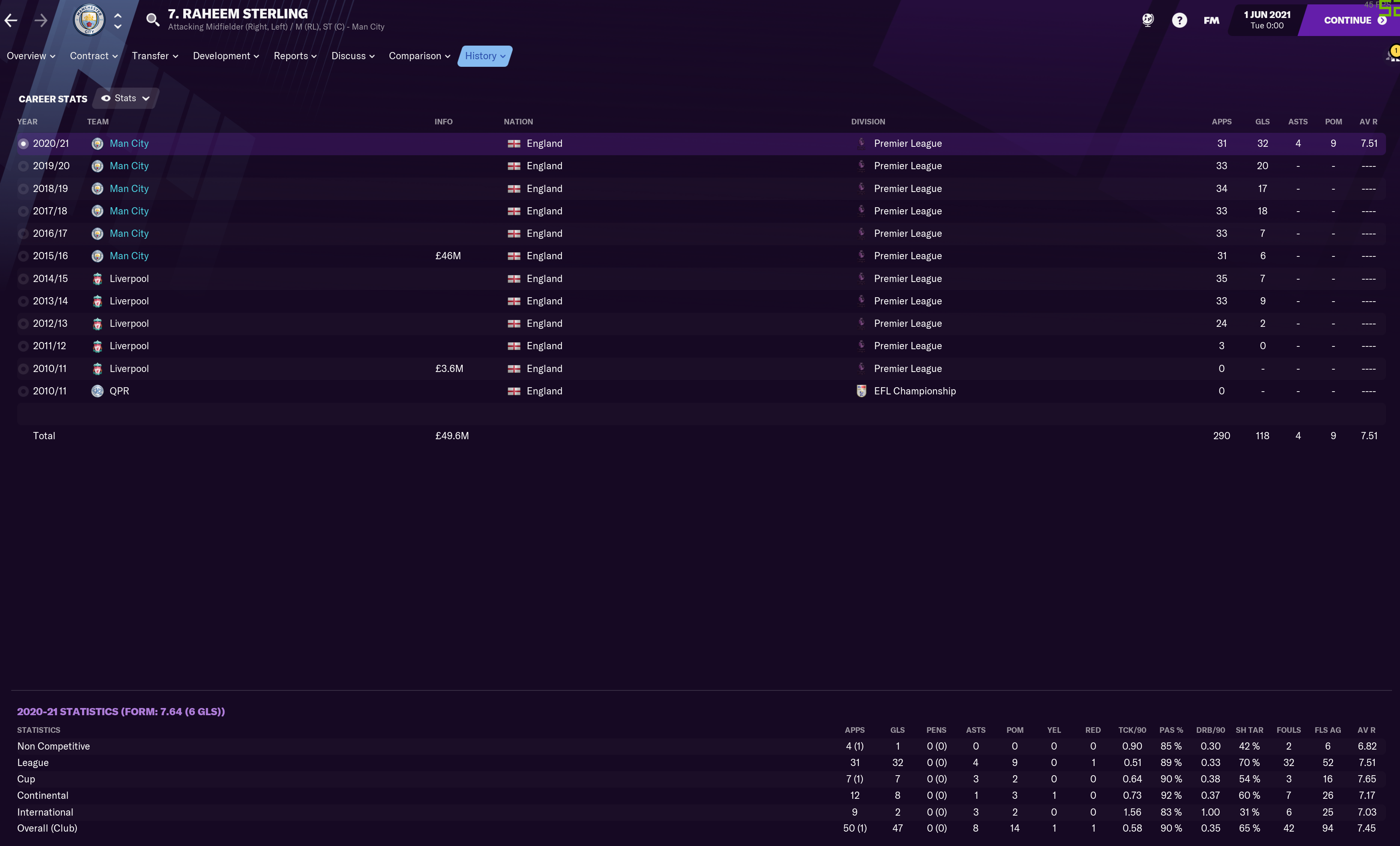 Below your also find the analyst stats for my Atalanta side from my Atalanta save. They were far and away the best offensively and were even very decent defensively as well but it was their attacking prowess which really saw this tactic excel. It was also the case across the City and the Aston Villa saves (which I’ll come too shortly). 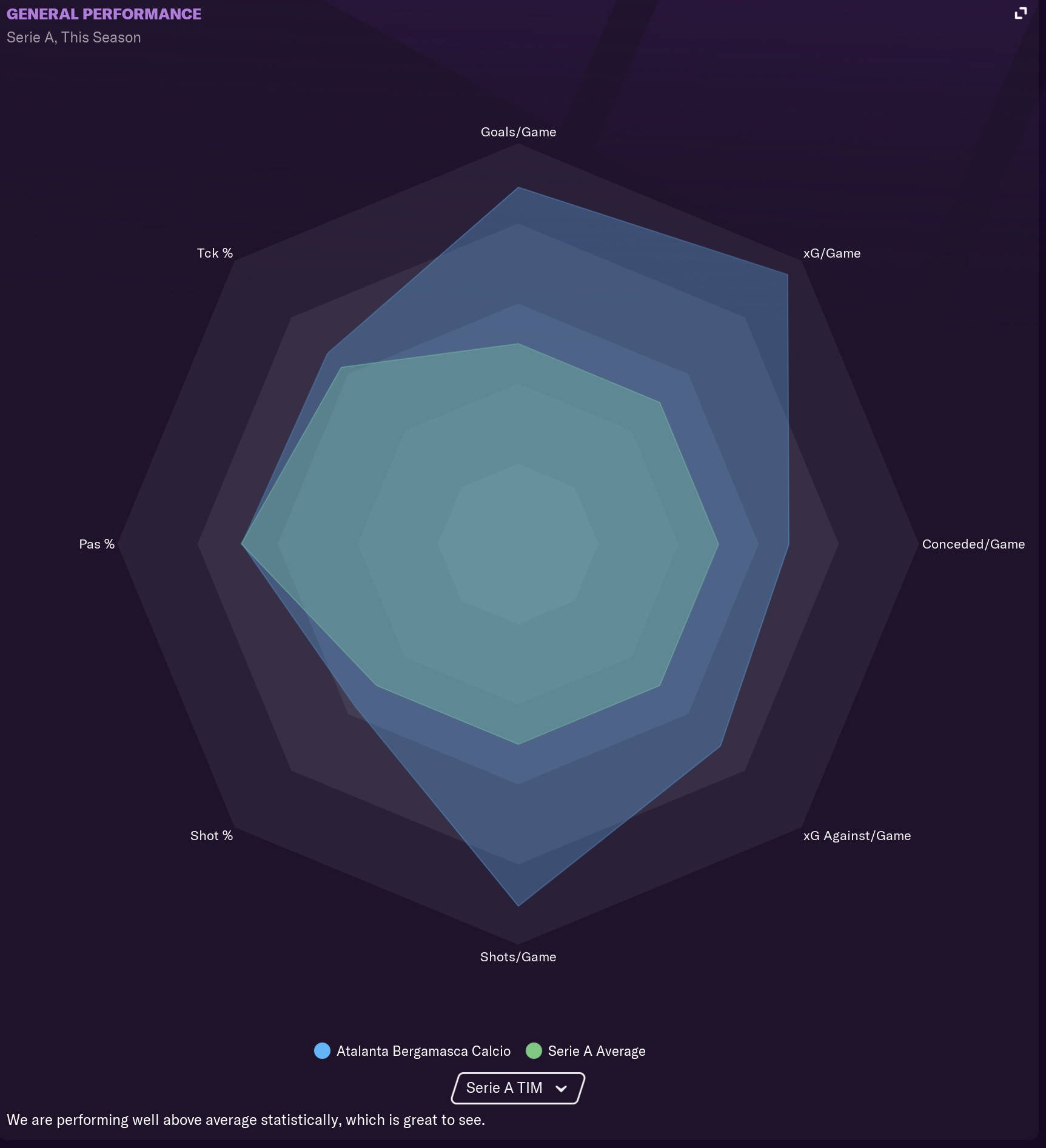 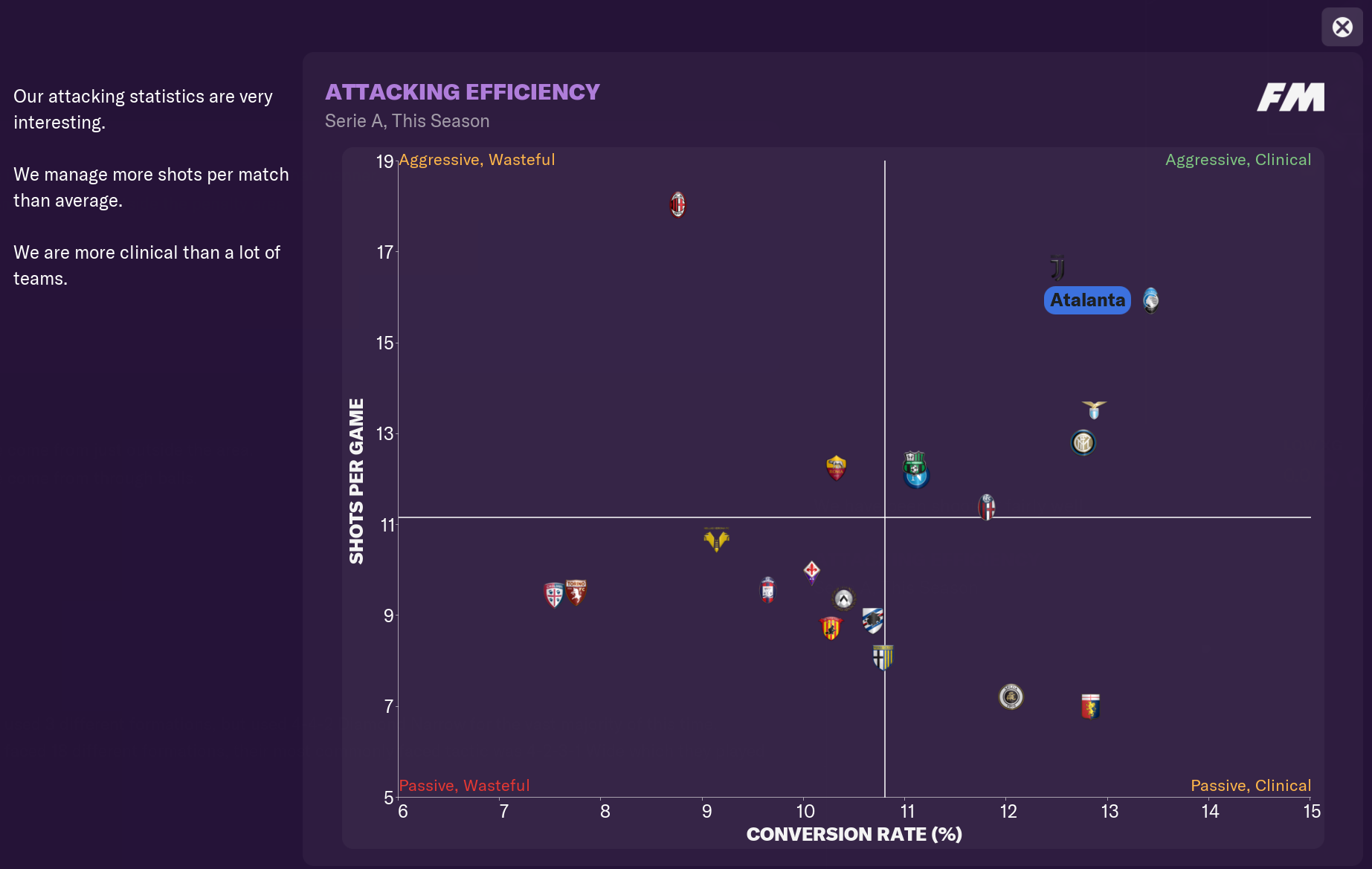 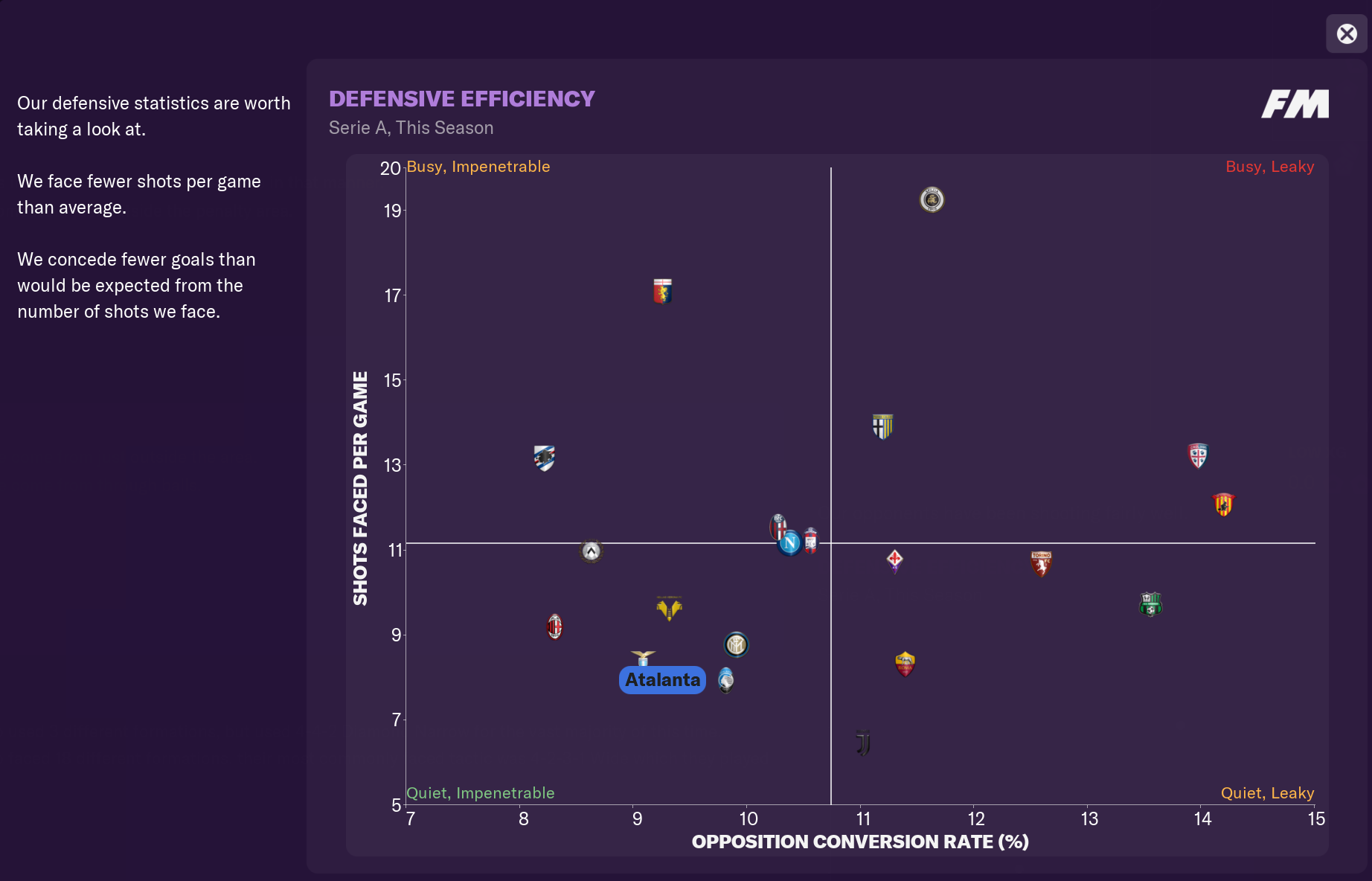 Finally after Atalanta and Manchester City’s success we also come to Aston Villa who in my opinion were by far the most surprising and craziest ones from this simulation. Aston Villa were predicted at the beginning of the test save to finish in 18th place, therefore being likely relegation candidates, and the team were lined up as follows where possible during the simulation. 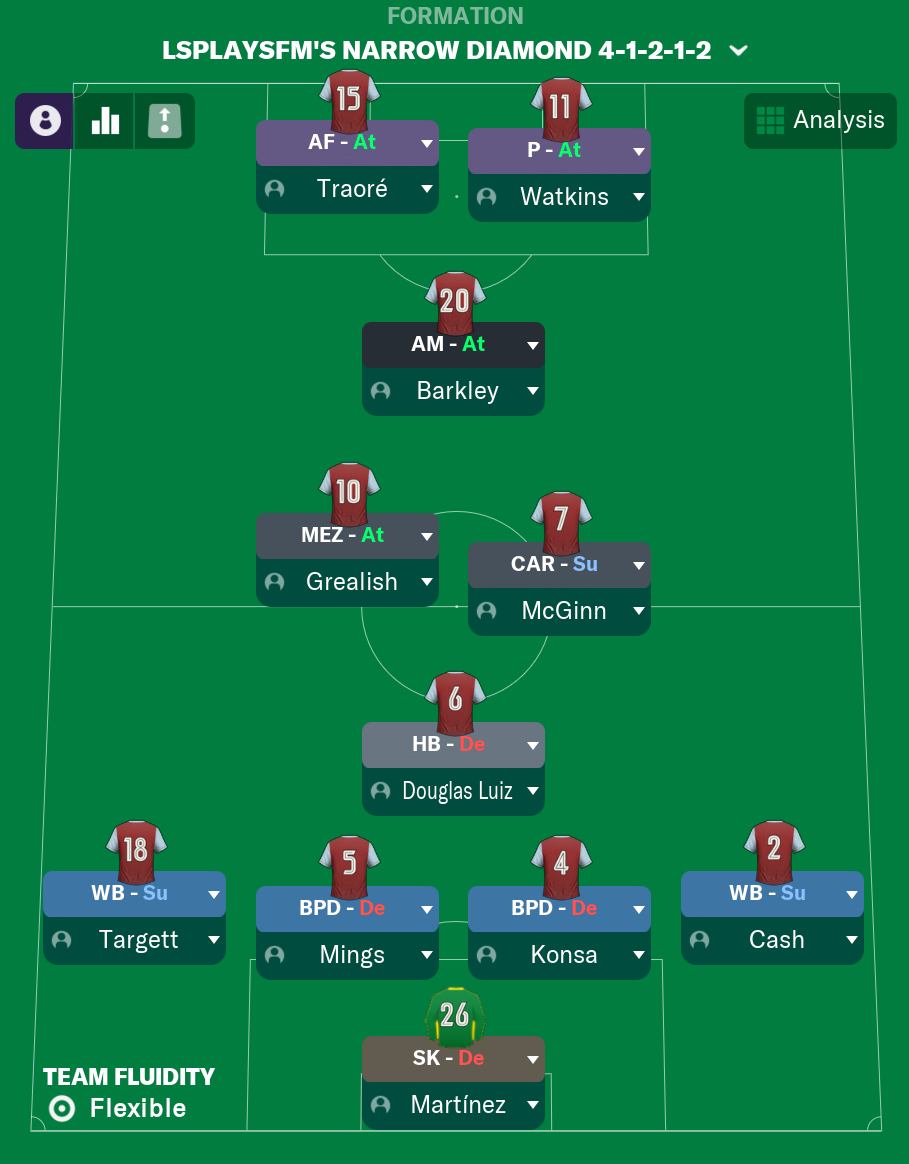 With this tactic, Aston Villa did the unthinkable and went on a Leicester styled season finshing up in 4th position and earning themselves 67 points. They were arguably lucky based on many sides such as Chelsea, Spurs and Arsenal all underperforming, but regardless, the fact a relegation threatened side (using the exact same squad they started with) finished in 4th and earned Champions League football is crazy. On top of that as well, Bertrand Traore who was played mainly as an Advanced Forward finished the season as the Golden Boot winner in the Premier League having 27 goals in 37 games. With the performances of Luis Muriel, Raheem Sterling and Bertrand Traore, it clearly highlights how a pacey advanced forward in this tactic works absolute wonders!

I also wanted to provide you with a further update with this tactic and that I have since played on further with this tactic in both my personal Atalanta save and in my Twitch series with Norwich City in the Premier League! With both sides it has again done very well, winning a second successive Serie A Title with Atalanta and scoring 94 goals in 38 games and with Norwich finishing up on 73 points and in 5th place in the Premier League!

You can see how my Norwich side from Twitch lined up as well below, it was practically the same tactic (with the exception that we played the carrilero instead as a DLP on support as we had no decent players for that role). 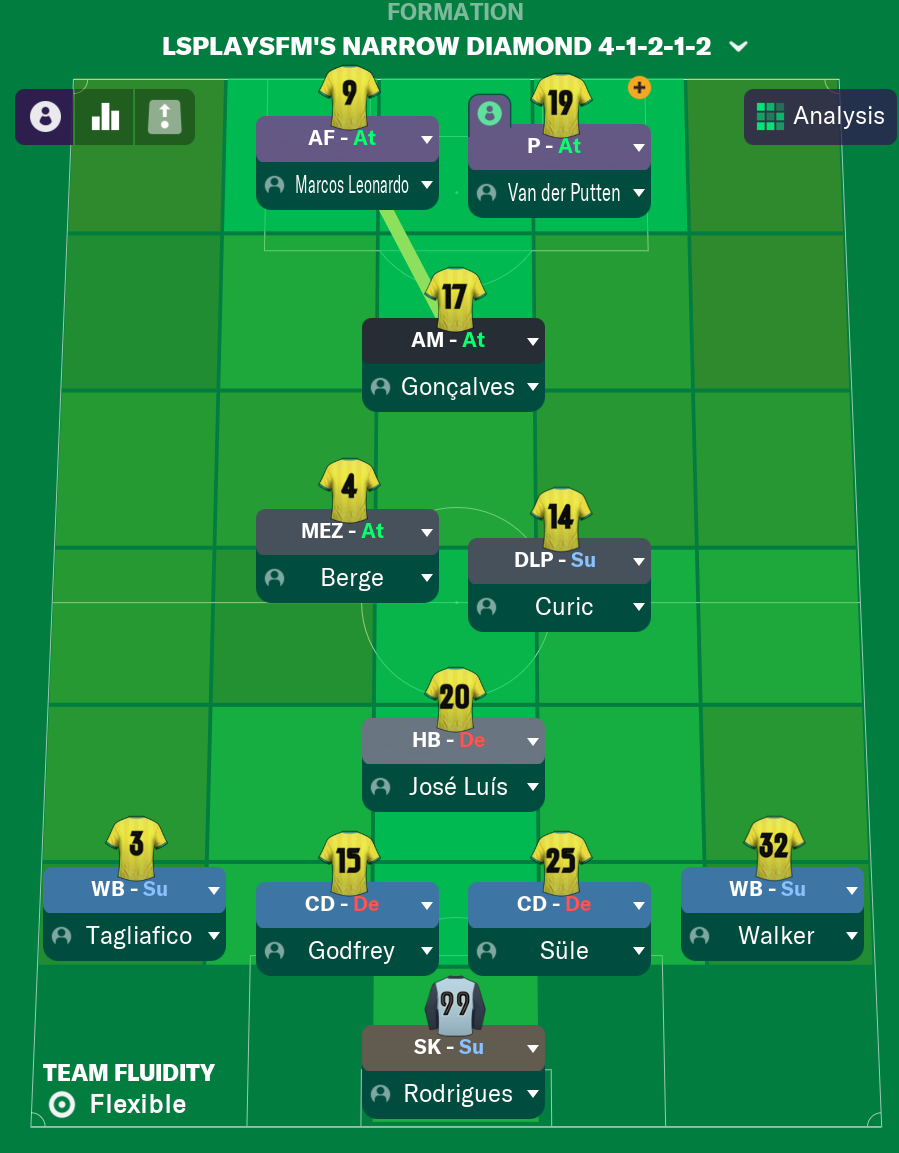 Overall that is how the tactic itself functions and across each team I used it with, it functioned very well allowing teams to either totally outperform expectations or to dominate the other teams around them and just outscore them wherever possible!

In addition to my YouTube video above, if you would like to take a look at any of my other content such as my FM21 Tactics Videos, my FM21 Tutorial videos or my FM21 Experiment videos, then please do also check out the links below for my various playlists and my channel where I release content at least 3 times a week regarding FM21.


Finally, you can also find me over on Twitch where I currently using this tactic now with my Norwich City save. We are currently about to begin our 5th season at the club and are hoping to be in a position to be pushing for the Champions League spots this season. Come join us via the link below and drop a follow on the channel.


Hope you enjoy the tactic guys, and of course if you have any questions, do feel free to ask and please also do let me know how you get on using the tactic. If you do find it to be useful please do feel free to leave any positive feedback and do make sure to go over to my YT channel and drop a sub so you’ll be notified when anymore of my content goes live.