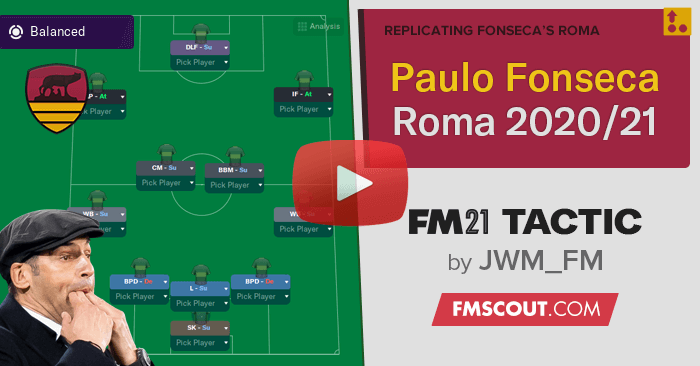 For further in-depth breakdown check out the FMNetwork video or keep reading.


Paulo Fonseca was born in the former Portuguese colony of Mozambique, before moving to Portugal in his early teens. He played professional football to a high level, with a career beginning with Barreirense before a move to Porto, where he didn’t play but loans to clubs such as Belenenses and Maritimo before Vitoria Guimaraes and Estrela Amadora. It was at his last club that he was coached by Jorge Jesus and he began to consider life as a coach, he told The Athletics James Horncastle “Jorge was the first tactical coach I had. He made us see things differently and I started to think about the game during the game very tactically.

He retired and began coaching with his first professional coaching job at CD Aves, narrowly missing out on promotion from the second flight. This led him to be appointed by Primera division Pacos de Ferreira in 2012, which is where his reputation really began to build. He led the Porto bases side to a 3rd place finish and qualification for the Champions League. This success caught the attention of the larger neighbours in the city as Fonseca was appointed Porto manager. However, this appointment was not successful with Fonseca being fired during the 2013/14 season. He would then return to Pacos de Ferreira, with decent results before moving onwards to Braga, for a single season. In this season he achieved a 4th place league finish and won the Taca De Portugal, beating, you guessed it, Porto in the final. Securing Braga’s first domestic trophy in 50 years.

He moved abroad in 2016 moving to Ukrainian powerhouses Shakhtar Donetsk, which is where he came to the attention of football hipsters everywhere. He won the league double in each of his 3 seasons and regularly performed well in the Uefa Champions League. His Shakhtar side was known for their high energy attacking style of play. Along with the inspiration taken from Jesus, Fonseca is an exponent of the “Tactical Periodisation” style of coaching developed by Vitor Frade, and, made world-famous by Jose Mourinho. Like all good aspiring trendy managers, he is also known to regularly express his enjoyment of Pep Guardiola sides.


His tactical philosophy widely remains the same between his time at Shakhtar and his time at Roma, although he has adapted to the personnel in his squad. Initially, he continued with his 4-2-3-1 often deployed during his time in Ukraine, this system was often as base, from which he could adapt to a 4-4-1-1 or 4-4-2 during the defensive phases of play. When attacking, it could look like either a 3-2-4-1 or a 2-4-3-1, both of these relied on the width coming from his fullbacks. Fonseca is a manager who prefers to build up from the back and demands that his sides build from the back. In order to do this, his sides deploy a number of strategies.

During the 2019/20 season, the 4-2-3-1 system developed a variety of build-ups, including a transition where the right-sided central midfielder would drop back, between the centre-backs to form a functional back three. This allows for both full-backs to progress up the pitch as it maintains a functional 3 man unit. Another option was that one of the wing-backs would sit narrower, forming, again, a functional back three, this would keep the central midfield pairing but allow further progression from the remaining full-back. This was often influenced by the attacking unit, as players such as Mkhitaryan would naturally drift inside and others such as Justin Kluivert would aim to stay wider.

Another key component of this system and Fonseca’s approach is to control the middle of the park. The ability to do this is linked to the formation of the back three, for example, if the centre-mid drops back to create the unit, then this would leave only the CAM and the remaining centre-mid (often outnumbered by trio in midfield or cause a central mid overload if against another centre mid pair). To combat this, Roma often ask their wider attackers to come inside with the width coming from the fullbacks, to add to this fluidity the dropping centre mid could again push up between the lines and provide a passing option, whilst capable of returning to a 3 if possession is lost. The narrow position of the wingers is something Fonseca has continued with since his days in Ukraine, at times (to put this into FM terms) moving from a 4-2-3-1 (wide) to a 4-2-3-1 (narrow) *if we ignore the defensive shifts in position for the moment. This would give the defence or centre mids 3 options to pass to whilst compacting the centre of the pitch.

To add in another football hipster phrase, the attacking midfield three look to exploit the half-space, with either one or other of the wingers moving into the half-space or the number 10, which can allow for a quick passing option and also allows for this player to involve his opposition full back (as the half-space is between the full-back and centre back) and mean that an overlapping Roma fullback will cause an overload or if this half-space engages an opposition centre back, allow space for the striker and other attacking midfielders to exploit centrally. If the ball is progressed wide to the fullback, the attacking unit in the half-space is then ideally positioned to run from deep, in the space between the full-back and the centre back *(or the channel, I think).

In defence Fonseca is a fan of pressing deployed in a compact and narrow defensive shape, although not to the same level as thought of by those thinking of a true Gegenpress deployed by a Klopp or Hassenhuttl, for example. Instead, Fonseca favours a more pragmatic approach in which his side look to press as the opposition enter into his sides half or their defensive half of the centre circle (a medium block). The key similarity is the preference to press his opponents out wide, potentially requiring less repeated exertion, as you are pressing opponents against the byline, rather than requiring a bilateral press on each individual. Favouring a defensively compact shape, and wanting to press out wide may seem counterproductive, so it’s important that the team are not pressing at random. A particularly key trigger is the ball moving from opposition centreback to fullback, where, in the 4-2-3-1, pressing would be applied by the CAM, Winger and possibly fullback, on that side. The fullback is given the opportunity to press as the narrow defensive set up look to shift across to naturally push that fullback forward towards the play and act as cover if he is beaten. Despite his more pragmatic approach, with any committed press, if the opposition is capable of moving the ball around the press, this can leave his side open to counter-attacking opportunities.


This season began with Roma continuing to deploy the 4-2-3-1, before a shift in July to a back 3, having initially debuted this in the Coppa Italia. This shift in tactics saw an initial defeat to Napoli before an 8 match unbeaten streak, including a 3-1 win at Juve (I mean Zebre). The system that the Giallorossi now deploy is often described as a 3-4-3.

This system allows Fonseca’s side to start with a back 3 without having to transition during play, the ability of his keeper deployed as a sweeper-keeper also means, that the back 3 can move or sit wider. The aforementioned “dropping of a centre-mid” continues now either allowing a forward passing option or if repeating the drop into the defence allows for a back 4. This system also allows for transitions into similar shapes as his 4-2-3-1 in attack, however this time from a position of greater defensive solidity. Now the 2-4-3-1 can be achieved by a centre back progressing into midfield, often the refashioned deep-lying playmaker Bryan Cristante.

This also aids with the control of the central space, as if pushed up into midfield or defensive midfield space, this allows one or other of the midfield two to progress, as the wide wingers, you guessed it, move centrally into the half-space. The attacking options of Mkhitaryan, Pedro and Pellegrini are all adept at finding this space, with Italian starlet Nicola Zaniolo sure to add further talent to this pool on his return from his ACL injury. As with his 4-2-3-1 system, allows for the attackers to focus more centrally, with the width coming from the wing-backs. The wingbacks provide the option of a cross, which would suit a striker such as Edin Dzeko. However, with the narrow front 3, this allows him to be a focal point that can play through deeper runners such as either of the wide forwards. This is aided by the use of runners from midfield, such as Jordan Veretout or Pellegrini (traditionally a CAM or wide attacker now often deployed alongside Veretout).

The defensive unit continues to work in their more narrow and compact manner, however, without a whole team press, the press tends to come from the wide attackers, fullbacks and centre mids, with the defenders holding shape. Overall as a side, rather than being overcommitted to a press, they can revert to holding their shape quite quickly. A weakness of Roma last season was their press if teams played through the middle, as neither Dzeko or Kalinic were the most mobile, resulting in the use of Zaniolo as a centre forward on occasion. However, this year with the loanee Borja Mayoral, an alternative option to the less mobile Dzeko could aid in these situations.

Although regarded as some as part of Serie A’s entertainers along with sides such as Atalanta, Sassuolo or Spezia, it can’t be denied that Fonseca is under pressure currently at the Olimpico. With his side regularly inconsistent and particularly struggling against the fellow sides aiming for a top 6 finish. Despite this, overall, his Roma side are showing signs of overperforming however, whereas previous years have had one or two overperforming sides this year the competition between the top sides is even more intense. Can Fonseca overcome this pressure and deliver a top 4 finish to the Giallorossi amongst the title contention of Internazionale, the re-emergence of AC Milan, the underperforming but always threatening Juventus, the established entertainers Atalanta and of course, their arch-rivals Lazio?


Below are attached screenshots of the tactic and results. 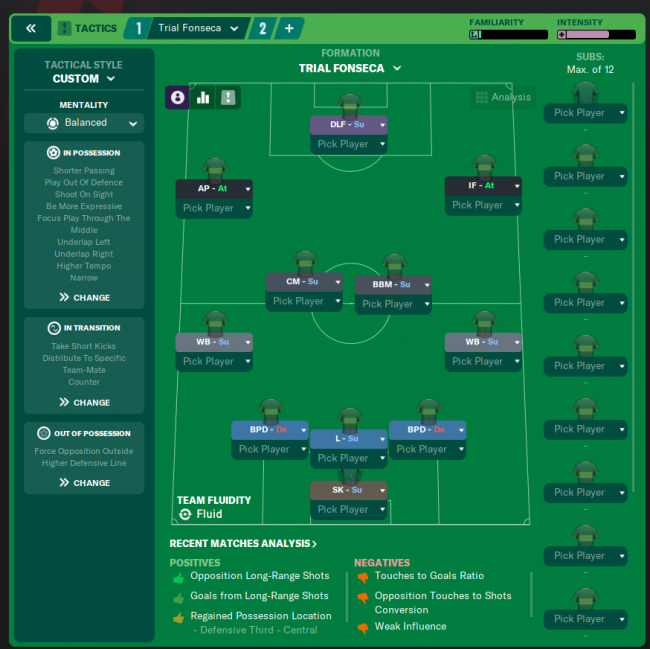 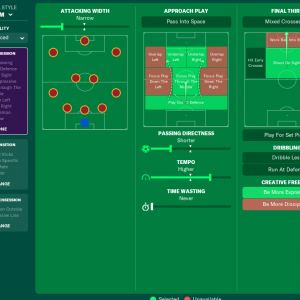 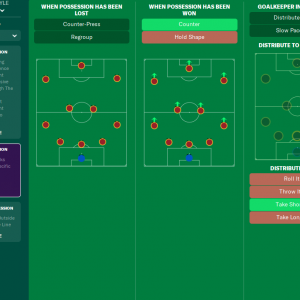 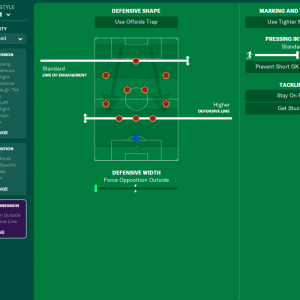 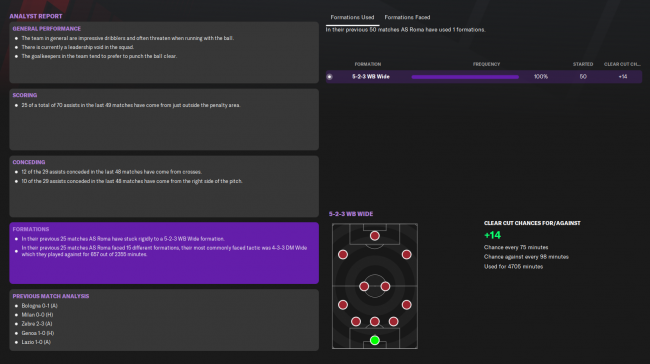 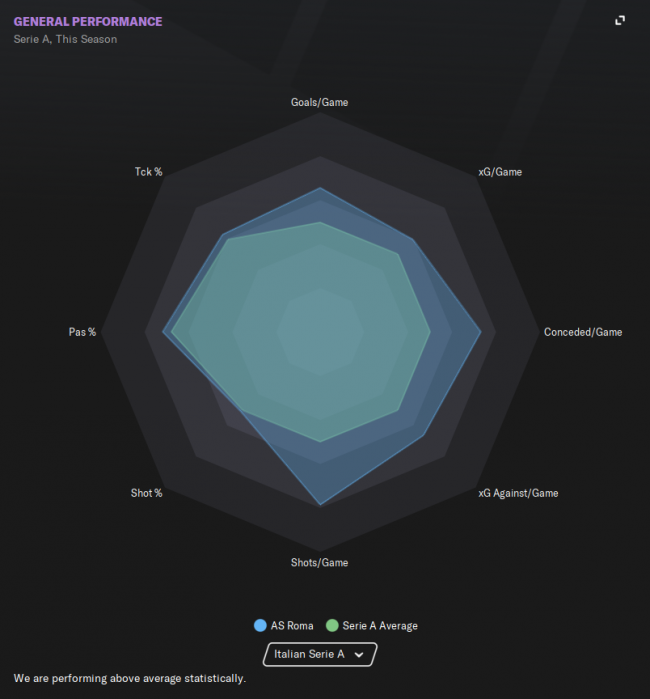 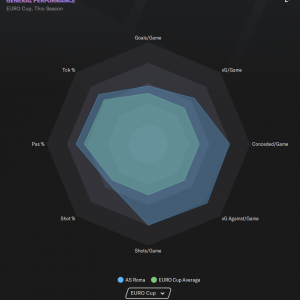 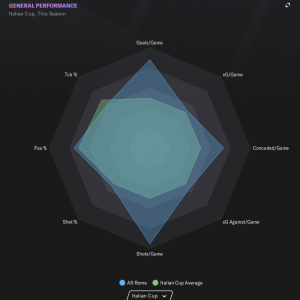 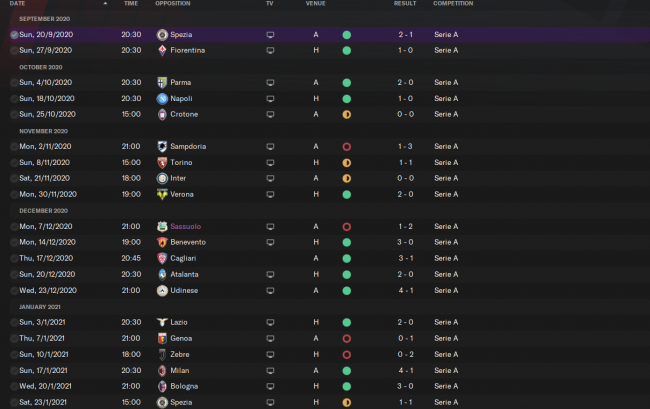 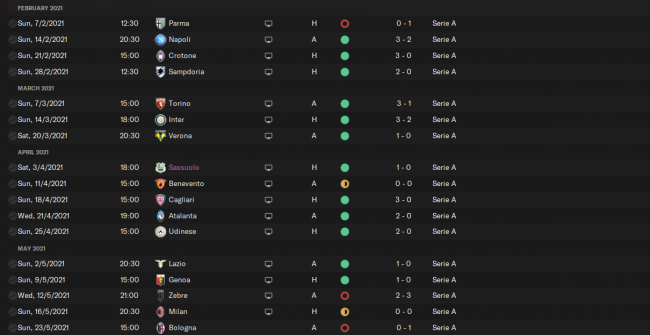 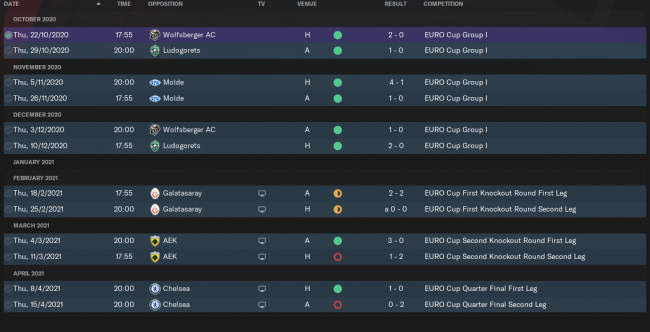