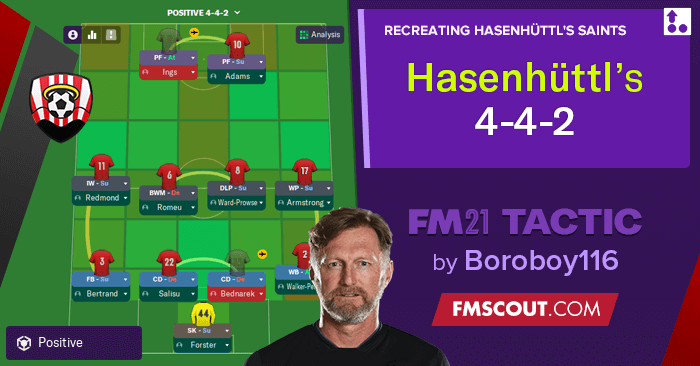 When Southampton made the decision to appoint Hasenhüttl they appointed a forward-thinking manager who plays a progressive, attacking and modern style of football. Hasenhüttl is one of the game’s rising managerial stars, his career to date is already filled by success story after success story. His work in Germany included taking Ingolstadt from the bottom of the Second Division to the Bundesliga, backing this up with a midtable finish the following season in the Bundesliga. He then took RB Leipzig close to the title running Bayern all the way. Hasenhüttl believes in a footballing philosophy centred around tactical and technical ability relying on heavy pressing and quick chance creation.

The list of elite managers who have both time and appreciation for Hasenhüttl is impressive, including Pep Guardiola and Jürgen Klopp, and the reason he draws their praise is obvious: his tactical style aligns fairly closely with theirs in certain ways. Hasenhüttl’s Saints play a brand of football similar to the “heavy metal” style Klopp brought with him to Liverpool. His team press, run and harry, attacking incisively, focusing on fashioning chances via quick interchanges and explosive moves.

At Southampton, Hasenhüttl has created four principles based on his philosophy with the ball, against the ball, playing the ball and using the ball. One key component of Hasenhüttl’s 4-2-2-2 (4-4-2 on paper) system is the positioning of the central midfielders. They will often remain slightly deeper, with the wide midfielders drifting into central positions, often left empty by the central midfielders, to create a box shape in behind the two roaming strikers. This means Hasenhüttl’s central midfielders have to be tactically versed as a combination of a no. 6/no. 8 style player, adept at ball-winning and playing the ball progressively forward. The wide midfielders are also a hybrid of different playing styles, drifting between a winger/inside forward/attacking midfield style. This tactical versatility makes them unpredictable and therefore highly useful on the counter-attack.

An advantage of this box shape is it leaves Southampton with an overload of attacking options centrally, providing more opportunity to score. This is an example of how Southampton like to use the ball effectively. One potential weakness of this box shape is it leaves the wide areas with potentially large gaps, but this is often compensated well by wing-backs, who drift forward into these positions to cover when off the ball and provide options on the attack.

When the opposition wins the ball back from Southampton, in this system, the team is coached and primed to counter-press aggressively, looking to regain possession of the ball as quickly as possible and ideally, if it is the case, in dangerous areas of the pitch, inside the opposition half. This pressing is highly useful for Southampton to play progressive attacking football and disorientate sides who don’t press or play at the same speed. It is a system which requires high levels of energy and defensive awareness that is followed by clinical and quick attacking play Southampton are arguable the best pressing side in the Premier league which the stats backed up since the lockdown period ended. 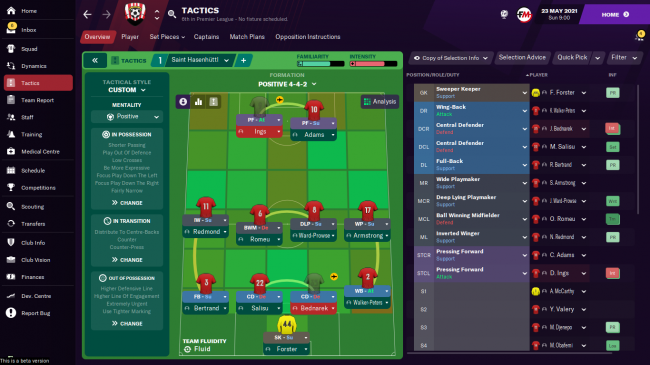 The shape Southampton line up in is a 4-4-2, however, the wide men often push higher than the central midfielder pair to form a shape more like a 4-2-2-2. To replicate this I have selected the wide players to tuck inside using the sit narrow instruction alongside the get further forward instruction, This has the added benefit of helping in the defensive phase being more solid and more difficult to break down. 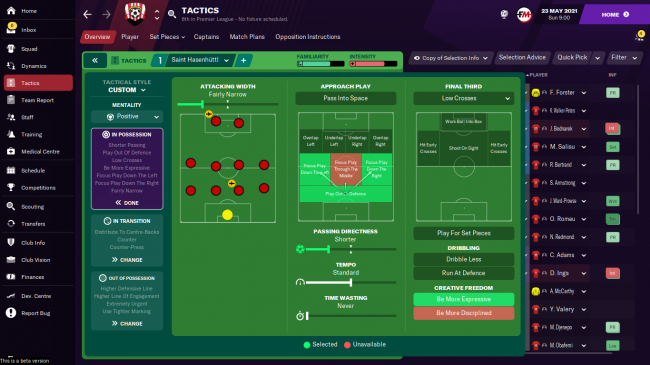 To mimic the movement of the wide players coming inside with the strikers going outside I went with a narrow width but focused the play down the left and right to ensure the half-spaces are attacked. To further enhance those movements be more expressive is selected. I am using shorter passing as Southampton average around 500 passes a game in the current season and this will help replicate these stats. 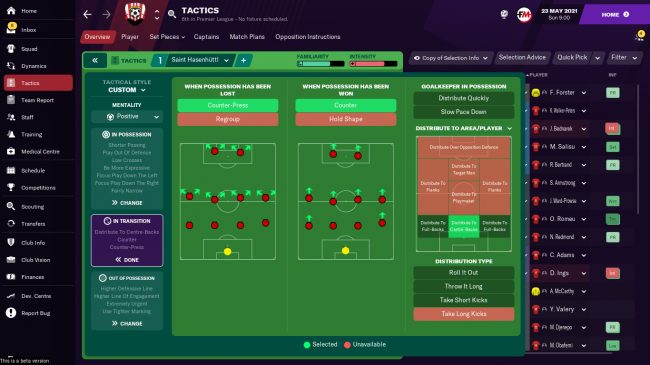 In transition, the team will counter-press and counter as per the gegenpressing philosophy of Hasenhüttl, the team will therefore create chances through quick turnovers of the ball. The counter instruction will also help with the long direct balls that Southampton like to play getting the ball up the pitch as quickly as possible. 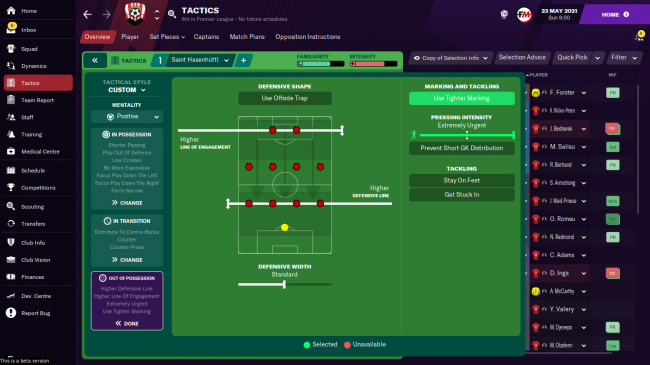 Without the ball, Southampton uses a mid to high block, they like to invite opponents to play out from the back before quickly squeezing and pressing them into submission. They also like to go man to man in their making limiting the options for the ball carrier. In games, I was expected to win I would go high high like above with my lines. However, against the bigger teams, I would drop these lines to standard and force the opponents to the outside.

The video below showcases the tactic in action.

I was happy with the results of the tactic finishing 6th in the league and challenging in the cups. The first half of the season was more inconsistent but after allowing the Assistant manager to take care of training whilst I added the match practices seemed to work wonders. 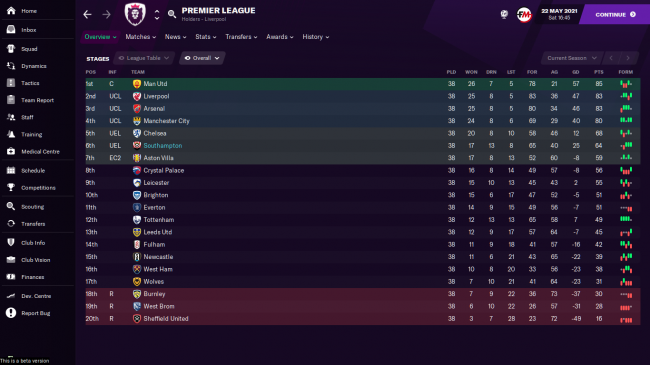 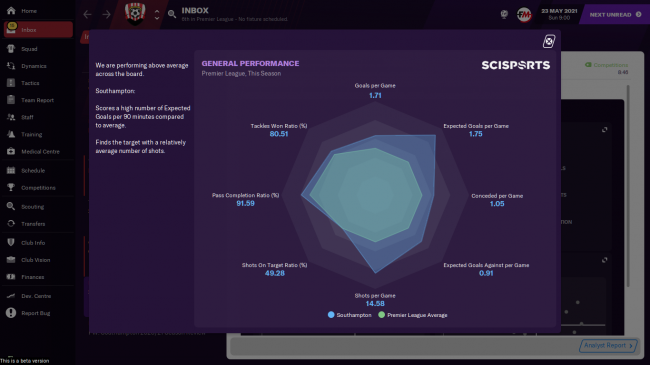 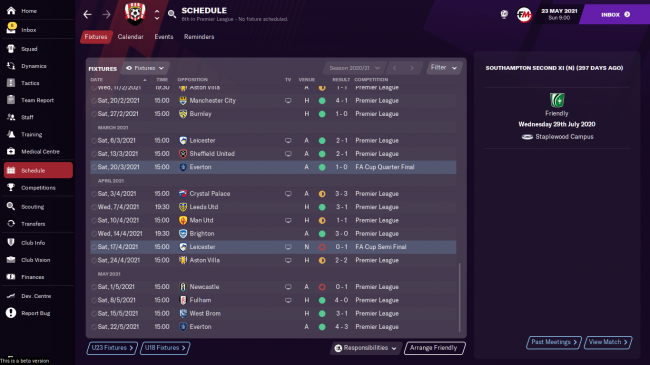 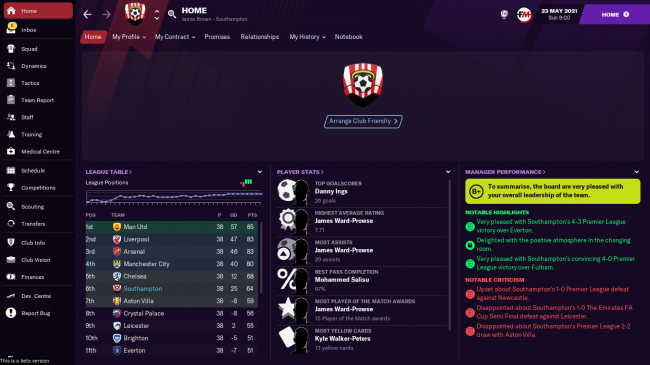