I made this for FM19 now did it for FM20 this is the second update I have done multiple updates to it and fixed some issues.

Story:
Red Bull comes to London with a goal of buying a Club, The 'Red Bull GmbH' purchases Welling United, renames it Red Bull London also known as London Bulls, They Rebuild\renovate their current ground & facilities and they set a plan to build and move to a giant Stadium by 2023 with a goal of 3 back to back promotions in mind.

Seeing how RB Leipzig is so hated in Germany everyone will probably hate RBL FC too, kind of like how they mocked Manchester City once, but they will Hate them they won't really make fun of them like they did with city, so almost every London club or near to London clubs are Fierce rivals to the club main ones being Crystal Palace with The Wings Derby, West Ham with Powerhouse Derby, Charlton with South-East London derby and Millwall with The massacre derby. And also seeing how Leeds United are the most hated team in England they are also one of RBL FC Rivals to determine which hated team is the best hated team in England, seeing how RBL FC are a "no history" club chasing for glory they Rival Aston Villa and Nottingham Forest both of which ruled Europe once upon a time.

Also have added some other rivalries to make every step and lower leagues more fun, they all make sense to me honestly and I believe if you use your imagination and mix it with those club’s story it will make sense.

RBL has a fairly higher reputation than teams in the club’s league but just think as if high reputation people want to go to RBL because they like the project and the vision.

The club is ‘likely friendly’ with Brighton because the enemy of your enemy is your friend which is Crystal Palace in this case.

Also, City and PSG are low level rivals to RBL FC just to make sure if you get stuck in a long battle with them for years, they’ll become our rival. (City vs RBL the battle of the goliaths.)

Explanation about two of the derbies: Charlton vs RBL is named South-East London derby just because it’s the as south eastern as a London derby gets.

And for the Millwall derby I just wan to add two more nicknames that I like The massacre derby, Lion vs Bull… Roar vs Rage! 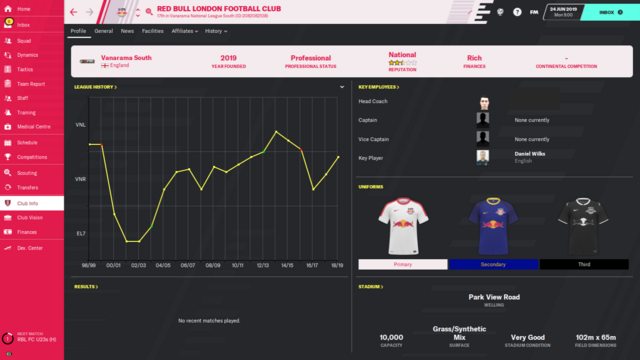 The challenge:
The club has similar vision to other Red Bull teams mixed with a little bit of Manchester city and PSG.

Seeing how the club has a giant stadium coming and 0 fans to fill it with you almost have to play entertaining football, sign high reputation players and do community out reaches constantly to keep the team going.

This is seen as a 50-year project in Red Bull’s eyes so your sponsors will all expire after that point just keep in mind that if you want to keep them and renew it you will have to make this a success story.

- Club will still play at Park View Road until 2023
- Park View Road will be the training ground after and before the move
- Park View Road will be youth ground after and before the stadium move.
- Also, Park View Road is upgraded quality and condition vise (also boosted the stands to 15K capacity – 30K Expansion)
- Club will move into the new Red Bull Arena in 2023 (60K capacity - 99K expansion)
- Increased finances (Sugar daddy Foreground)
- All current Welling United players and staff are still contracted to Red Bull London (At least all the ones I could find)
- Red Bull London carries on the heritage(history) of Welling United
- Red Bull London will participate in the Vanarama National League South
- They are Affiliated to all other Red Bull owned clubs (also there are other affiliations to assist with Brexit situation)

How to add RB London in FM20

Put the folder inside the folder named "editor data" from the zip to:
·C:\Users\USERNAME\(OneDrive)\Documents\Sports Interactive\Football Manager 2020\\editor data

And then choosing to use the RBL FC database when starting a new Career.
And Yes you'll have to start a new Save for this to work.

I also added a guide for the graphics in the RBL FC file but here is also an online link to it:
https://imgur.com/a/iWIGV3J

Works with the stock English database.
Will work with most custom English databases provided they do not have any changes to the teams participating in Vanarama League South.
Red Bull London UNIQUE ID = 2082082528 Red Bull Arena UNIQUE ID = 98047309

*What I have done with the RBL FC is basically I used RB Leipzig, Red Bull Salzburg and New York Red Bull as a template.

Known Issues that I wasn't able to fix:

Data Analysis Facilities are poor and for some reason when the team moves to the new stadium the youth team also moves to the main stadium even though the old stadium is set as their main stadium and is still intact after the move.

-graphics:
u/therealmaxfischer for Logo & The idea of this whole thing
u/The_keg__man for Kits

-editor data and where I got the idea to this from:
NutSixteen from steam
https://steamcommunity.com/id/NutSixteen NutSixteen Profile

Send a Message to me if download link doesn't work or if there is any problem, I will email you the fixed\repaired zip file if you leave your Email address.