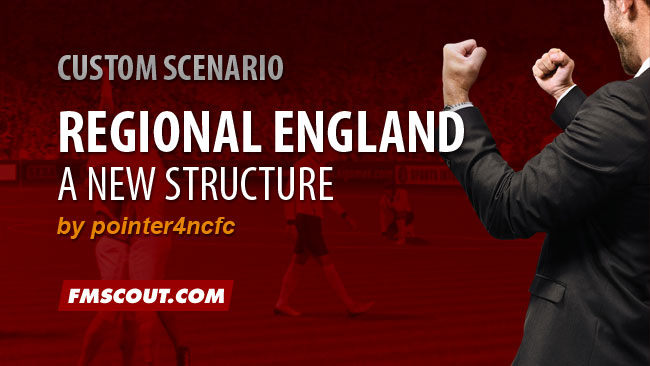 A new structure bought into England. It has been split into 10 different regions, some of these region containing 8 divisions and one of them only 5 teams in he region. The idea of this was to regionalise England. The new structure is shown below.

Below are a couple of examples of divisions in this database.

These division are that feature in Level 2 of the pyramid the winners of each of the 10 divisions play in a play off with 3 teams being promoted through this into the top division. Teams relegated from these divisions will fall down the structure.

The rest of the levels will usually have 3 relegated until the bottom division in that region. Then 2 automatically promoted with one going up via the play offs. As shown below.

I will be constantly looking to improve so message me either on FM Scout or send a message to my page on Facebook.

Move the downloaded file New_England.fmf to your editor data folder:

After a break from creating content for the community, I am back! (Pause for dramatic effect) My databases alone have amassed near 20,000 downloads, the graphics I have made for different Megapacks have not been tracked.